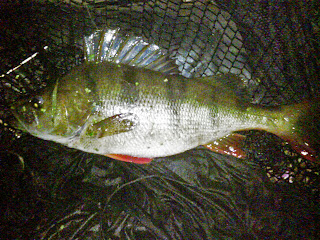 First trip after a week down at the in-laws in Pembrokeshire. Didn't have chance to go fishing while we were down there, but did go otter spotting (successfully!) with my lad and helped the father-in-law with the family falconry business (http://www.pembrokeshire-falconry.co.uk/). Was therefore glad to get out on the river again and even more pleased to arrive at Borrowash and find the car park empty. Walked downstream to the section where I'd had a few perch to 2lb 10oz last season. River was low, with gravel bars sticking out that I hadn't seen before and more weed growth than usual. Settled for a swim with lots of marginal vegetation where I thought the perch might be lurking, but with a nice crease at a couple of rod lengths to trot down for bits. 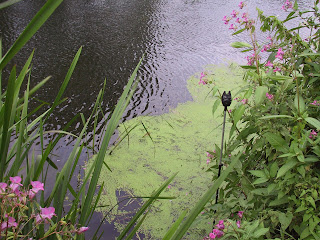 Soon started catching small chub, bleak and gudgeon on the float, so was able to put a perch paternoster out fairly quickly. Had first take on a small bleak. Felt a smallish fish on the end before it came off. Put the rod out again and didn't have to wait very long before the bait was taken by a perch of about half a pound. Out again with a small roach and this time it was taken by something a bit more substantial. A big clump of blanket weed around the lead made it feel a bit heavier than it actually was, but I was pleased (although I don't look it!) to subsequently land a perch of 2lb 2oz. 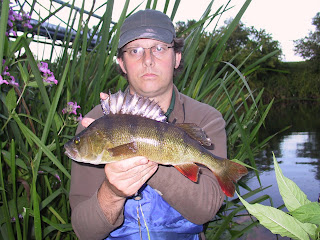 Must remember to look at the camera and smile!

Had a couple more takes before the light went. One that came off and another around the half pound mark. Had kept the trotting rod going throughout and ended up with a mixed bag of chub, roach, dace, bleak, gudgeon, skimmers and minnows on the float. Also hooked into something a lot bigger that put a real bend in the rod as it shot off downstream. Unfortunately the size 20 couldn't hold on and the line came back covered in slime suggesting a big bream, or even a tench (had one while fishing lobs for perch last winter!).