My friend Stuart's retirement coincided with the start of lockdown in March. This meant that not only were we unable to give him the leaving do he so well deserved, but that he had to go into an empty office to clear his desk! Having kept in touch via social media, we decided that it was about time to meet up for a socially-distanced catch up on the River Trent. 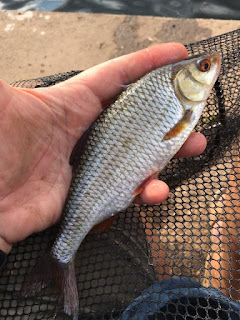 Unfortunately the day we chose also happened to be the hottest of the week, so when we arrived on the embankment in the late afternoon it was still heaving with folks out enjoying the sun and looked more like a scene from a south coast beach. The river was covered in all kinds of craft, including rowing boats, kayaks, paddle boards and motor boats. However, the stand out mode of river transport was the giant inflatable flamingo containing four, slightly sun-burned and inebriated gentleman who were toasting the appreciative crowd with beer as they went past. Apparently they had launched their "booze cruise" upstream at Beeston weir and were featured in the local news the following day with a warning against such behaviour from the Canal & River Trust and several public comments about their intelligence! 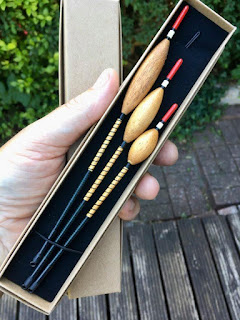 Fortunately our usual spot on the opposite bank was clear of revellers so we made our way over the suspension bridge and settled down just upstream on the concrete steps. We had a lot to catch up on, which made it hard to concentrate properly on the fishing even without all of the other distractions. However, feeding hemp and maggot and runing a stick float down the inside, we managed to catch a few roach, dace, bleak and perch between us before dehydration from sitting in the full sun for two hours took hold. Before we left I gave Stuart part of his retirement box - some traditional hand-made floats, including a set of Avons that would hopefully be put to good use during our next grayling campaign. 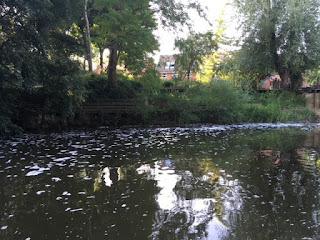 The following day, with the best part of a pint of maggots left over from the day berfore and  no sign of the forecasted thuderstorms, I headed over to the River Soar at Kegworth for another session on the float. Walking upstream I could see that there were fry everywhere so, despite the floods and topsy-turvey weather, it looked to have been a good year for recruitement. At my usual spot below the weir the main current was pushing along the far bank, so wearing waders had been a good choice (or so I thought!).

Donning the bait apron I got into a position where I could run the stick float down the edge of the current. For the next two and a half hours it was literally a bite a chuck as the area was teeming with hungry bleak, dace, chub, roach and perch. 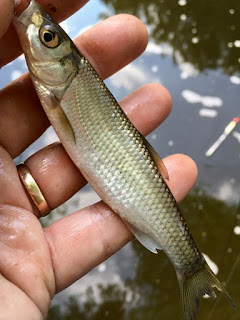 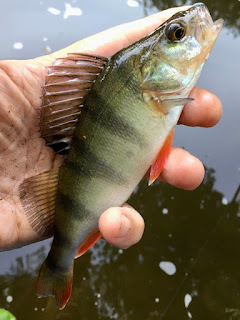 It must have been like fish soup out there, because I barely had chance to loose feed any freebies before the hookbait was away. Some of the bigger bleak were still in their seasonal livery and felt like sandpaper in the hand. Similarly I had a few large, dark minnows, also with white tubercles covering their heads, so it seemed that spawning acitivities were not quite over for some species. 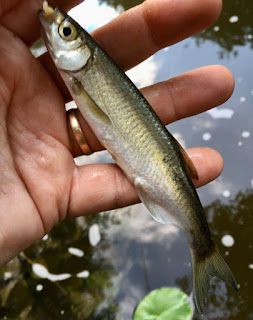 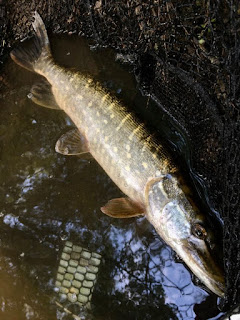 With the constant hooking and playing of fish it was only time before the predators appeared and I had several fish snatched off the hook by green and gold torpedos that appeared from nowhere from the marginal lilies. I evenually managed to land a couple of these smash 'n' grab thieves, one that refused to give up it's prize before I bundled it into the net and another that managed to transfer my size 18 from the fatally wounded dace into the point of its snout. 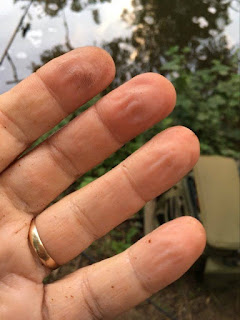 Whilst I was the only one out fishing that evening, I'd not had the river to myself as one of the local "yoofs" had been been busy going up and down the river in a canoe ferrying his mates to an encampment on the island upstream of me, respectfully keeping his distance each time. What was obviously the last trip was soon followed by the sound of lager cans opening and not long after that the unmistakeable aroma of skunk started drifting downstream. Did make me wonder what the return trips were going to be like! Carried on until I had run out of maggots and my fingers had gone wrinkly from constantly handling fish. I had been aware of a slight leak in my right wader while I was fishing, but when I got out of the water I realised that it was full to about knee level. Good job I had been wearing shorts, but my walk back to the car was accompanied by a loud squelching noise every other step.

Yet another job to put on the list for the weekend!
Posted by Toodle 2 comments: