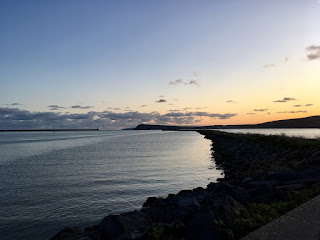 Another weekend and another short trip down to Wales. Unfortunately it coincided with some awful weather and all of Friday and most of Saturday was spent watching the rain lash against the windows, with England's monumental win against the All Blacks providing the only break in the gloom. Sunday morning looked a lot better so I made plans to head up to Fishguard again, the scene of a comprehensive blank when I was down a few weeks ago! The clocks changing had thrown a bit of a spanner in the works in that first light came an hour after high tide. Fishing the ebb wouldn't be ideal, but it would have to do. Set off after having to de-ice the car after a hard, overnight frost and arrived just as the sun was creeping over the headland.

Popped into the garage for a Costa and drank it in the car park before venturing out into the chilly air, hoping at the very least that the drop in temperature might keep the crabs quiet this time! Spotted oystercatchers, curlews, a kingfisher and a grey seal as I walked along the end of the breakwater. Once in position I got the gear sorted out and was soon avidly concentrating on the rod tips. Didn't have to wait long before the flapper rod started knocking. Wound in to find that a small pin whiting had hung itself on the bottom hook. 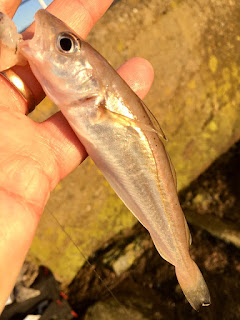 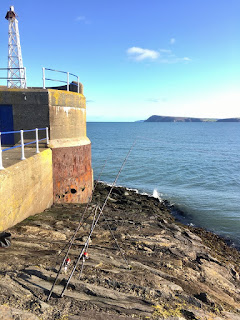 At least I had avoided the blank! The other rod had also been banging away during this time, but I wound in to find the mackerel/squid cocktail reduced to bare hooks - crabs again?? 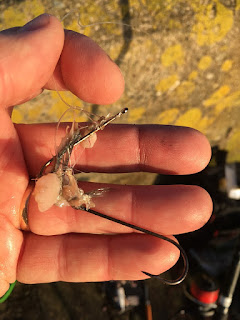 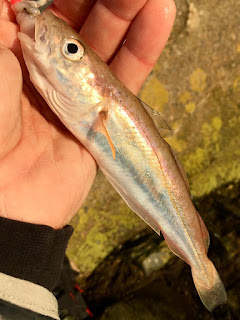 Got into a routine of re-baiting, casting out and then waiting for the rod tips to start twitching again. More often than not there was nothing on the end when I wound in apart from a mangled bait, but now and then I managed to snag another pin whiting, aka "fish finger"! However, whilst it had turned into a glorious morning, it wasn't exactly riveting and I found my mind wandering a bit, what with keeping tabs on the score between Wales and South Africa in what sounded a real grueller of a match and also watching a grey seal hunting along the weedy margins of the breakwater. As the tide ebbed away the fish activity seemed to die off as well, so I decided to pack up and head home to watch the second half of the rugby with the wife (at this stage a very concerned Wales fan!). At least I'd had a few fish this time and hopefully they'll be a bit bigger when we come back at Christmas.

Two more trips to the coast and two more opportunities to have a dabble in the sea, but with the contrasting results. First up was a quick trip down to Wales for the wife's birthday and for her to catch up with her parents before they headed off to France for the best of two months. As usual I'd kept an eye on the conditions with a view to factoring in a session or two. 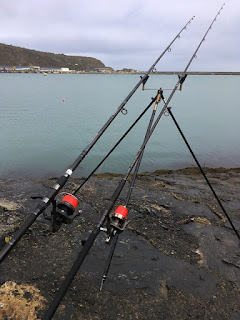 Fishguard was favourite due to the prevailing wind and tides, so early on Saturday morning I headed north with the intention of fishing three hours up from low tide.Went with mackerel and squid baits - a big cocktail bait on a pulley pennel and strips on a two hook flapper - having had some success with whiting and doggies this time last year. Had plenty of indications from the off, but unfortunately the baits were attracting the wrong kind of attention as the local crab population homed in and demolished them within minutes! Put up with two hours of this nonsense before admitting defeat. Another factor was that a fine mist had set in as well, which turned the rock apron I was standing on into an ice rink. A weird highlight of the morning was being serenaded by a grey seal, which sounded like a cross between a child crying and a dog howling, which echoed my mood as I trudged back along the breakwater!

The following weekend I was down at Saunton Sands in North Devon with the lads for the second of our annual surf trips. Again, the LRF gear was packed in the boot with everything else in case an opportunity arose to cast a line. A blown out, mucky sea meant that surfing was not on the cards on the Saturday, so we all headed up to Ilfracombe instead. My friend Craig went for the big bait, big fish approach with a whole squid on a pennel rig, whilst I fished my usual scaled-down paternoster baited with bits of "Gulp" sandworm. First drop down the side of the pier I had a small ballan wrasse, quickly followed by a couple of pollack. 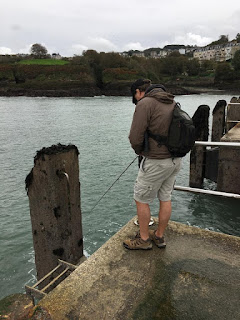 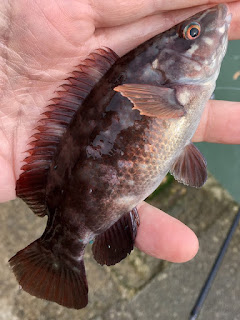 Went quiet after that, but I found that by moving about I could tempt a few bites in each spot, adding pouting, corkwing wrasse and a rock goby to the species list. 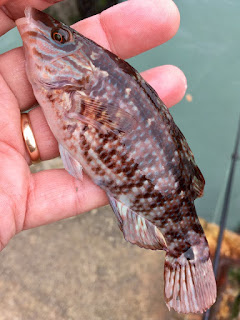 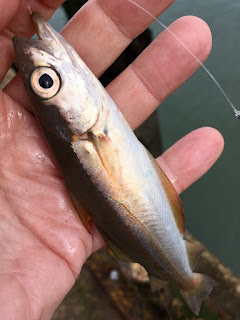 At one stage the pollack pushed a shoal of fry up to the surface, which in turn attracted a lone garfish. Any clumsy attempts to dangle a bait in front of it were ignored as it harassed the fry, unlike the pollack that greedily grabbed at anything that moved! Unhooked one and dropped it back in, not noticing the cormorant that had suddenly appeared at my feet. Obviously used to getting an easy meal off anglers it then climbed up the steps from water level and was comically waddling about on the pier. 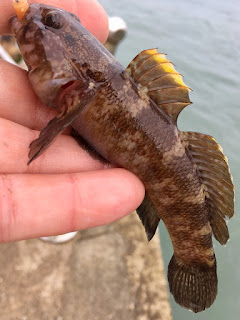 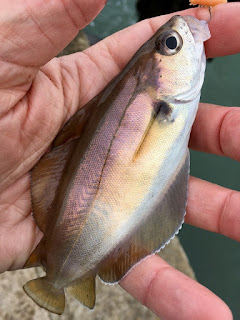 A fish-less Craig was packing up at this stage so duly shared his remaining squid between the cormorant and an equally attentive juvenile gull. Things had also slowed down for me so when the others turned up, bored of trawling the tat shops, I called it a day as well. Scores on the doors were 11 pollack, 4 ballan wrasse, 2 corkwing wrasse, 2 pouting and 1 rock goby.

With more trips to Wales and Falmouth this month hopefully I will have more opportunities to add to the species tally - a goldsinney wrasse and a giant goby would be nice - before it gets too cold. Let's face it, I won't be getting out on any of the local rivers any time soon!
Posted by Toodle No comments: