Not wanting to rest on my laurels after Friday's session and with some unfinished business with a big perch I arranged to work at home so that I could finish and be out the door at 3 o'clock on the dot - the benefit of working flexi time! Refreshed my remaining maggots with another pint of mixed from Bridge Tackle in Long Eaton and headed off to the Soar once more. Got to the venue to find that the river was still clear, but that the rain over the weekend had injected a bit more pace into the flow, making it a lot easier to run the float through my chosen swim. Another obvious change was that the hordes of ravenous chub seemed to have moved on elsewhere which, as it turned out, at least gave a some different species a chance. 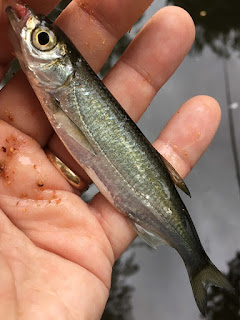 Soon got into a rhythm catching bleak, chub, roach and dace on the stick and, like on Friday, the perch paternoster was soon deployed at the bottom end of the swim. It had been grey and dull when I arrived, so I wasn't surprised when it started spitting with rain after about an hour. Rather stupidly I had left my coat in the car, so had to rely on my fleece and the tree canopy above me as a natural umbrella. 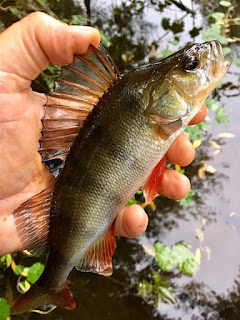 This meant that I had to retreat backwards out of the river a few paces, so ended up trotting down a different line out of the main flow. This didn't seem to make a difference as I carried on catching silvers, but also added some bonus species in the way of perch, gudgeon and a little ruffe. Can't actually remember the last time I caught one of these so, along with the gudgeon, it was a welcome surprise. 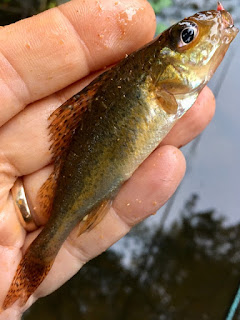 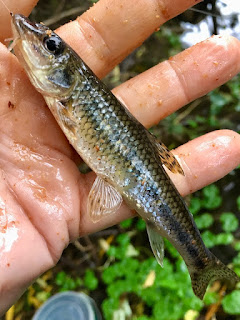 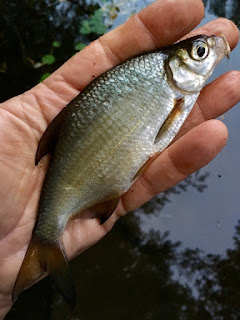 The  perch rod had been looking after itself all this time, so when the bite alarm eventually signalled a take it came completely out of the blue. However, my hopes of my first big stripey of the season were dashed when another jack started charging around the swim instead. Carried on and added a skimmer on the float rod to make it nine species for the night, before just concentrating on the perch rod for the last half an hour. Unfortunately, I only managed another jack and a small perch that eyes far bigger than its belly! Ended up with 34 bleak, 24 dace, 24 chub, 14 roach, 5 perch, 4 gudgeon, 2 pike, a ruffe and a skimmer.

So whilst a big perch eluded me again, It was another enjoyable session on a river that is obviously in a very healthy condition at the moment. Packed up and headed home a little damp, but happy!
Posted by Toodle 2 comments:

My river season doesn't really get going until late summer, but this year it was in danger of being pushed back to October, so this week I made a conscious decision to make the best of the fantastic weather we were having and get down my local River Soar. About 3 o'clock I stopped off at Soar Tackle and got my club book and a pint of "mixed" off Scott. A quick chat about my chosen venue revealed that the top of the section had hardly been fished this year - just what I wanted to hear! Fifteen minutes later I was heading upstream across the meadow and into the wood. Soon became apparent from the shoulder high nettles that what Scott had said was true, but I managed to battle through the vegetation in my waders relatively unscathed.

Got to my familiar spot and found the river low and clear, but still with enough flow from left to right to create a nice crease over to the far side. Looked quite promising from the top of the bank as I could see lots of small fish knocking about, so set up the rods and got down into the water. Started off by trotting maggot under the stick and had a fish on, a small chub, first cast. Was soon obvious that it was like fish soup out there! Most casts the float barely managed to travel six feet before the maggot was snatched by a chublet, dace, or bleak. 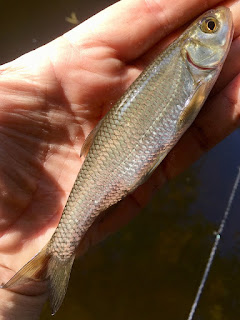 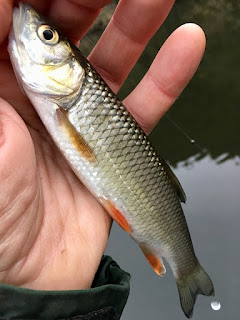 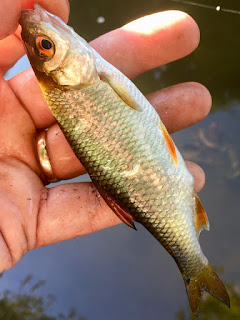 I was therefore able to get some baits in the bucket and the rod with the perch paternoster out into the slack to my right in double quick time. Carried on with the float, building up the swim and letting the paternoster rod work away by itself. Didn't have to wait long before a slack line bite indicated some interest from a predator. However, before I could get on the rod the bait was dropped, its scaleless flanks indicating the likely culprit. Popped it back into the slack to be taken again a few minutes later. Unfortunately, thoughts of a decent perch were dashed when a green, spotty torpedo immediately went airborne. Carried on in this vein for the next 3 hours, adding a few roach and a single skimmer that somehow managed to get to the bait before the ravenous hordes of little chub! Obviously, with this much food about, there were also a few more predators in attendance.


However, six more hits on the paternoster just resulted in more pike or stolen baits. Hung on for as long as I could, straining to see the float in the gloom before packing up. For the record I had 94 chublets, 35 bleak, 12 dace, 8 roach and 1 skimmer on the float and 3 pike on the paternoster......but not a single perch on either! 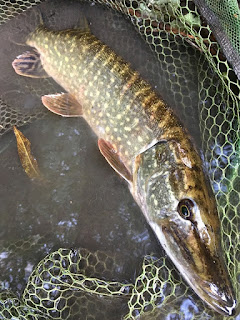 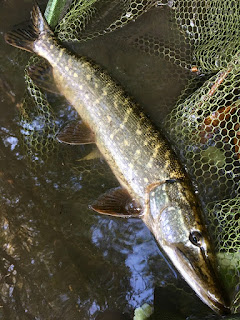 Still, it had been a very hectic and enjoyable session and I as I headed back to the car through the nettles the river was absolutely alive with topping fish. Made me think that there must be a big perch there somewhere, but that will have to wait until next time.......
Posted by Toodle No comments:

Time flies. Didn't seem like five minutes ago when were picking the boy up from Uni for the summer when, all of a sudden, it was time to take him back again. Friday afternoon saw us travelling fully laden down to M5 to stop off at our friends in Exmouth but, as usual, a spot was found in the car for the LRF gear. Unfortunately, an hour's crawl past Bristol put paid to a potential evening session, instead plans were made to hit high tide early next morning. 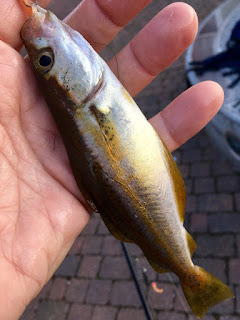 There was a bit of a nip in the air as Simon and I walked down to the docks, but it was bright and sunny and we were soon greeted by a fantastic panoramic view across the estuary. The water was clear and we could see a big shoal of small fish in our first spot at the "compass". We both expectantly set up scaled down paternoster rigs with size 10 Sabpolo wormer hooks baited with artificials, Simon going for "Gulp" angleworm and me for small sections of sandworm. I won the race to get the first fish, a pollack, on the scoreboard. However, it soon became evident that there were a lot of these about - the baits were getting hit before they'd even hit bottom and fish were coming up two at a time! At one stage it was difficult to see anything else getting a look in, but I eventually managed to break the monotony with a small ballan and a couple of sand smelts, my first of this species this year. 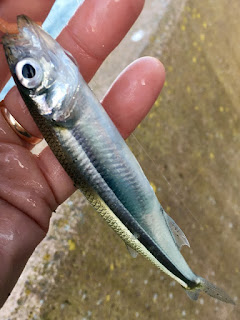 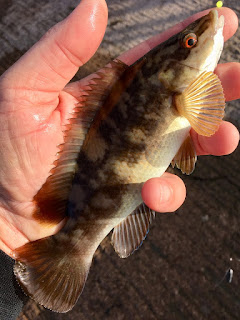 After about half an hour of non-stop action we were ready for a change. The incoming tide had now slackened off, so we headed for the dock wall. Found Greg of East Devon Fishing just setting up, so had a quick chat. I was interested to learn that he was actually targeting bream with frozen black lug tipped off with squid. Filed that away for future reference before dropping down the side a little further down the dock. Again, the pollack were there in numbers, but amongst the ravenous hordes we managed to find a few different species, including a couple of corkwing wrasse, and a fat tompot. 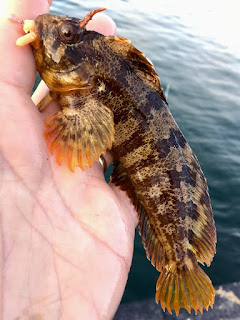 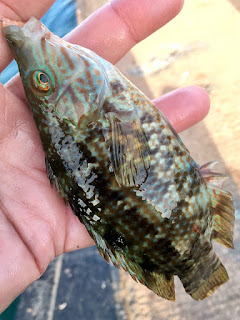 Simon also managed a small pouting, a rare catch from the venue according to Greg. As the ebb tide started ripping through along the dock wall we left Greg and headed to the boat ramp. First drop down next to the sheet piling I had a thumping take from another small ballan. Second drop, same again, but instead of the expected wrasse I found a brace of tompots on the end! At this point Simon asked me if I was there any point in carrying on as I was unlikely to top that. Not one to ignore a challenge I re-baited and dropped down the side of the ramp one more time. A few seconds later the rod tip rattled and I was pleased to find a long-spined sea scorpion on the end. 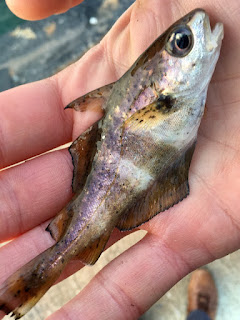 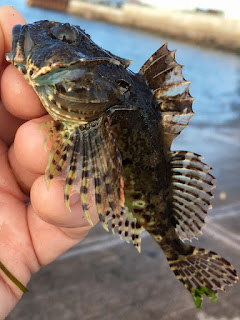 After dancing around like a pair of big kids in celebration, which must have bemised Greg still on the dock, we agreed that was the perfect moment on which to finish and headed back home for breakfast. Finished with 34 pollack, 3 tompots, 2 corkwings, 2 ballans, 2 sand smelt and 1 scorpion.

Went back the following morning for a session before rugby training, this time dragging Simon's lad Daniel out with us. Some resistance on Dan's part to leave his bed on a Sunday morning meant we headed straight for the dock wall to catch the short window of slack water. Needless to say, the pollack were there in numbers and were all over the baits right from the start. In the clear water, small groups of fish could be seen following their hooked brethren right up to the surface before diving back into the depths. However, I again managed to whittle out a couple of ballans and tompots. 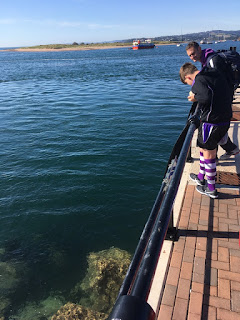 As the tide turned floating weed became a nuisance, so we watched some huge, barrel jellyfish and the odd mullet drifting back out to sea on the ebb, before seeking out some more sheltered water. There was a chap thrashing the water to foam with a lure with little apparent success on the ramp, so we had a look around the rocks at the end of the dock wall instead. Along with a couple of inevitable pollack, it seemed we dropped into right tompot "hole", as we managed 8 between us in quick succession from the same small area. Inevitably it was time for Simon and Dan to head off to rugby, so we said our reluctant goodbyes. Ended up with 32 pollack, 2 ballans and 9 tompots.

Once again, Exmouth delivered goods. Roll on October when we'll be back again!
Posted by Toodle No comments: