My first few trips out in saltwater this year have been very poor, so I was after some redemption when I drove over to Milford bright and early to catch high tide. There was a bit of a breeze coming over the Haven when I arrived at the stone pier, but otherwise it looked as if it was going to be another glorious day. 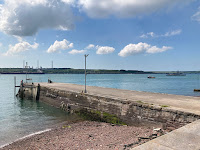 Had the place to myself, so initially headed up the left-hand side near the steps that had always been a good spot in the past. My confidence in artificial baits had been knocked a bit, so the intention was to fish bits of ragworm on a scaled-down, two hook flapper rig tied with Decoy SG-3 S hooks (roughly a UK size 12) and some micro-beads for a touch of bling. The rag that I'd got from J&M's Tackle in Pembroke Dock the day before was absolutely top quality, with most of them as thick as my little finger. 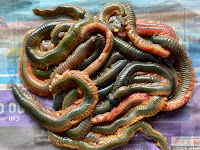 Keeping them in seawater in the fridge overnight as advised in the shop had also kept them nice and fresh and it was almost a shame to snip them up into little bits! Got baited up and lowered the rig to the bottom, feeling with the drop-shot lead for the clean areas between the patches of weed. Had expected bites instantly, so was a bit concerned when a few minutes later I'd not had any interest at all, despite occasionally hopping the rig along the bottom to attract the attention of anything in the area.
Therefore worked my way along the side trying all around the bits of structure, but still had nothing. Eventually reached the end of the pier and first drop down was met with a very welcome rattle on the rod tip, resulting in a small corkwing wrasse. 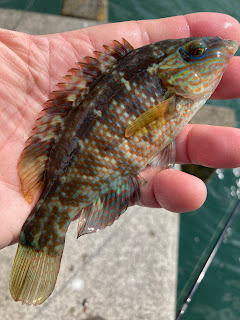 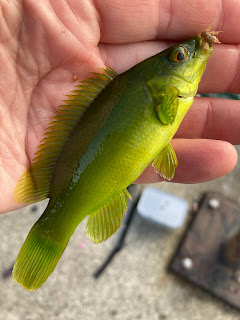 Next drop down I had a striking little, emerald green ballan wrasse, followed by a rock goby. From then on it was a bite a chuck. Seemed the fish were concentrated in a small area of slack water formed by a back eddy and the left-hand corner of the pier. Literally a few steps sideways and the bites tailed off. 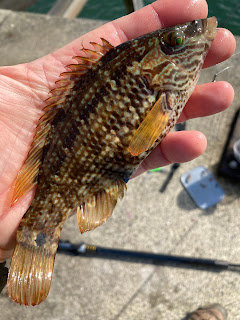 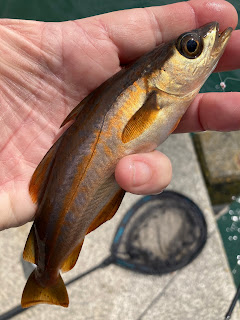 As on previous visits the corkwings were the dominant species, particularly the ravenous little males, coming up two at a time on occasion. Had a few larger and very fat and possibly spawn-bound females, which made me think whether the bigger, mature males were off building nests ready to receive the ladies. 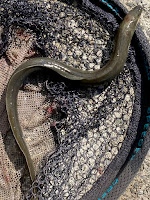 A pair of lads turned up at this point and set up on the other side of the pier, so took the opportunity for some intelligence gathering. Turned out they were here for the bass and were soon launching their squid and mackerel wraps out into the Haven. Carried on happily hauling up corkwings, interspersed with the odd ballan, goby and strikingly coloured pollack. Was eventually thinking of calling it a day when I hooked into something a bit different and a silver eel came writhing to the surface. Thankfully he was lip-hooked, but still coughed up his breakfast in my landing net and covered me in slime. Resisted the tempatation to carry on as time was pressing and it had been a case of diminishing returns as the corkwings had been getting smaller and smaller to the extent that my hooks were just getting stripped by their incessant pecking!

Ended the morning with 45 corkwings, 3 ballans, 3 pollack, 2 rock gobies and that single eel. Had plenty of rag left as well to salt down for future sessions. Hopefully that's my poor run  broken now and I'll look forward to returning in the summer.

I'm not a Royalist by any means, but 70 years on the throne is not something to be sniffed at (one day Charlie!) and I certainly wasn't going to moan about getting a double Bank Holiday. Therefore decided to escape with the wife down to Wales leaving the eldest in charge of Chez Nous. With the in-laws currently in France we were looking forward to having the place to ourselves and just chilling out. I was also keen to have another go on my newly-discovered urban trout stream after solving the problem of an apparent on-line dearth of suitable jig-heads by buying a selection of tungsten beads, a box of size 12 nymph hooks and some UV-activated resin from a fly-tying website. 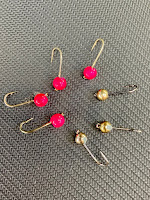 Hadn't taken long to knock up a few with the UV torch at a fraction of the price of buying ready-made ones, making the prospect of leaving them attached to shopping trollies a bit more palatable. Having re-stocked with worms from the father-in-law's compost heap I therefore headed off towards Haverfordwest, leaving the wife knocking out the zeds. Was early enough to be fairly quiet on the roads, but I was still careful not to be noticed when I parked up a little while later and snuck down to the water with my gear - not that I thought anybody would be bothered, I just didn't want to advertise my discovery! Had my chesties on this time thinking they'd allow me to fish more effectively in the river, rather than from the bank. 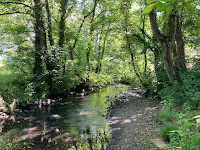 However, I was equally grateful for them given that I first had to wade through nettles and brambles that had shot up since last visit. Slid down the bank and started heading downstream, but my progress was blocked only after a short distance by a trash dam that a beaver would have been proud of, so I turned back upstream instead. Whist it looked as if it was going to be a glorious, sunny day it was quiet and subdued under the tree canopy and still cold enough to see my exhaled breath.
We'd stopped for fish and chips in St Clears the night before and the River Taf in the town looked like it was nearly down to it's bare bones. The same was true for the little stream - in contrast to my last visit when it had been higher and coloured after rain it was now gin clear with a much reduced flow. I therefore concentrated on the riffles at the heads of the pools and any deeper sections close to cover. Stuck with the winning method from recent trips and had already tied on a fluoro pink jighead, but it seemed a bit garish given the conditions so I replaced it after a few casts with one with a more subtle gold bead. Seemed to do the trick as a wacky-mounted worm tossed up into a little run next to some tree roots was immediately snaffled by a fin-perfect, little brownie. 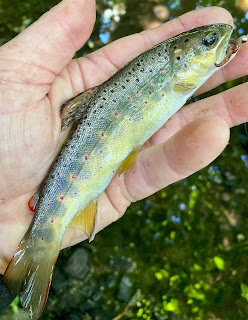 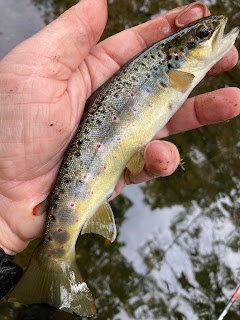 Lost a bigger one next cast - clearly seeing him twisting and turning under the surface before he shed the hook and shot back upstream. Carried on trying any likely looking spot, more than once cursing my own cack-handedness when my line looped over a branch and I had to disturb what looked like a perfect lie to untangle it. 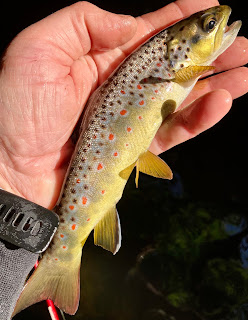 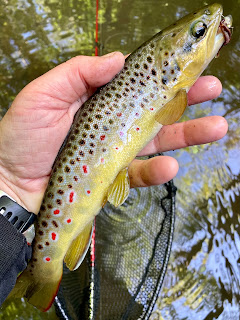 However, amazingly I didn't lose a single jig-head, although I had to change a couple after the hook was blunted or had opened out on a lump of brick or piece of angle-iron. Was also in and out of the water due to the number of obstacles, but by the time I had reached the road bridge that marked the end of the "free" section I'd virtually exhausted my supply of worms, had a dozen little brownies and had been mugged by several more. Headed back to the house picking up a pack of rag from Pembroke Dock on the way. Mini-species hunting next. Hope they are more obliging than they were at Easter!