Well, this has got to go down as my worst winter ever. Any brief window of opportunity that appeared in a hectic work schedule invariably coincided with sub-zero temperatures or flooded rivers. The building works at home had dragged on with the result that most of my fishing gear was still stored here, there and everywhere and largely inaccessible. Frankly, I was prepared to write the season off altogether but, with a rare empty day in the diary and some 20+ hours of flexi time, I decided to try and salvage something with a trip to the Soar. Got there at first light and was pretty optimistic. It hadn't frozen overnight and the rain the previous day had made little difference to the river, which was running at a nice level with a tinge of colour. The only immediate dampener was seeing the carnage alongside the towpath. 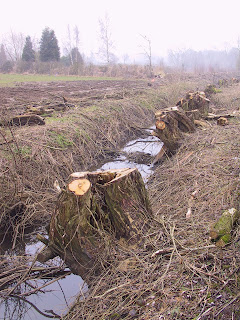 Short back & sides!
Hopefully being willows it will do them good in the long run, but there wasn't much to stop the breeze whistling past my ears all morning. The bonus was that I could spot anybody breaking into my car from about half a mile away! Walked upstream to my usual starting point and soon had the two deadbait rods out in the channel. Things looked even better when the left hand float waddled off within minutes of casting. Unfortunately, whatever it was somehow manged to snatch the joey mackerel bait whilst skillfully avoiding the hooks﻿. However, literally two minutes later the smelt on the right hand rod was off. This time the resulting jack of about 3 lb managed to stay on. A few minutes later and another two jacks were on the bank, leading me to believe I was in for a bumper session. 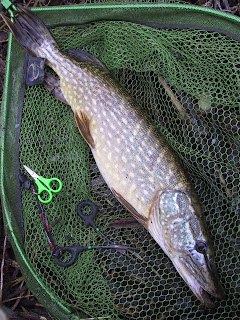 My name is Jack
What a fool! Fished all the way through to 1 o'clock without any further interest despite leapfrogging virtually all the way back to the car. After a leisurely lunch I decided that both a change in venue and species was in order, so headed over to the Trent with perch in mind. Found a nice swim with plenty of cover downstream, droppered in some maggots and chopped worm and dropped a fat lob over the top. Spent the next two hours watching a motionless quivertip in the drizzle. Gave up when I caught myself nodding off! Didn't get any better when a glance at the weather forecast when I got home indicated a return to subzero temperatures for the last week of the season. Oh well, roll on June.........
Posted by Toodle 1 comment: