Decided to stay local to the hotel this time and headed down to the beach at Taurito. From our balcony I could see that the left hand side of the beach was fringed with rocks that extended around the corner of the bay. When we got down there I noticed a local fishing off them, chucking out what looked like big lumps of bread under a float. Saw him catch what looked to be a small bream, so settled in a diplomatic distance away from him. The rocks didn't make dropshotting a viable option this time, so I also set up with a float with sections of Markyu Isome and Angleworm on the hook. Cast out as far as I could into the onshore breeze and let the float drift back towards me over the rocks. Wasn't long before the float was dipping and bobbing under as fish attacked the bait. However, I failed to contact anything with the hook coming back baitless. Eventually sorted this out by keeping the line tight by very slowly retrieving the float and feeling the bites through the braid. Initially found that the usual culprits, the wrasse and the damselfish, were responsible. However, had a take on the drop from something that shot around all over the place. Turned out to be a small Derbio. 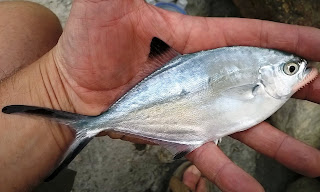 A few casts later and something grabbed the bait as it was coming in over the rocks. This was also a different species - a Lizardfish. 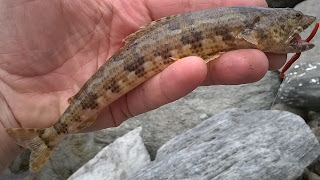 Had another one of these along with more wrasse and damsels before heading back to join the others for cocktail hour. Stu had been out snorkelling and reported seeing several, decent bass right close in to the beach. However, due to another local law - no fishing off the beach - these were also out of bounds!

Next day Stu and Dunc were booked in for a watersports package, so after waving them off to their potential doom on the parascending boat, I again headed off across the rocks. This time I headed further around the corner and found some deep water close in suitable for dropshotting -  next to a sewage outlet pipe from one of the hotels! This really turned out to be damselfish corner. I must have had two dozen of them, including the biggest of the trip. 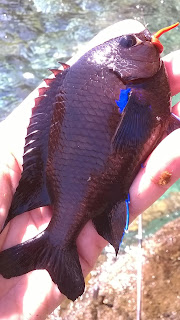 Rob came snorkelling over at one point to see how I was getting on. He was doing some underwater filming on the GoPro, so I promptly caught a damsel for the camera! I also had a cracking example of an Ornate Wrasse with claret and blue bands behind its head - a true Villa fan! 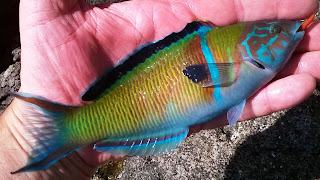 Had been snagging up in the rocks, so was trying to limit lead loss by gently feeling the rig down to the bottom and then lifting up 6 inches as soon as I felt the lead hit bottom. Had done this a couple of times when the bait was taken with a real thump. The fish charged around under my feet for a bit before popping up onto the surface. Was pleased to see that it was a different species - a European Parrotfish. 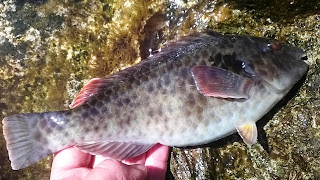 Got back to the others to find that Dunc had been hand-feeding the bass with bits of frankfurter sausage out of his potato salad! Tempting as it was, I didn't have a go for them. Rules are rules! I also understand that these European bass aren't indigenous anyway and are escapees from the various fish farms ringing the island.

Our penultimate day was also spent down on the beach at Taurito. While the others went swimming and snorkelling again, I headed off to try for something a bit different. Found a platform where I could again access deep water and put on a small paddletail. However, I couldn't get the required distance against the onshore breeze, so swapped it fairly quickly for a 7g silver Snapper Zapper casting wedge. Something slashed behind it on only the second retrieve. Next cast it was taken by something that shot off like a startled rabbit. Saw a long silver shape twisting in the clear water and its identity was confirmed when it went airborne. After a bit of a tussle I had a decent Garfish on the rock next to me. 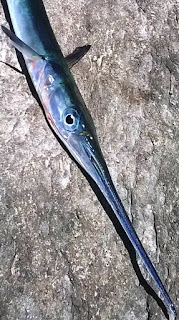 Took a quick snap and popped him back hoping that there were some more about. A few casts later I felt something bump the lure a couple of times before it was taken properly. Didn't feel a big fish, but I was more than happy when it turned out to be a small barracuda. 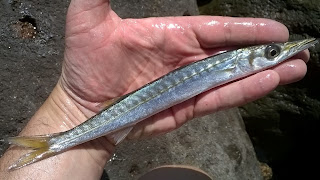 Popped him back in and cast over the same area. In the next ten minutes I had another eight around the same size. Each time I would feel the lure getting bumped and knocked as it came through a particular area. Stu happened to come snorkelling around the corner as I caught what turned out to be the last one. When he swam over he said that he reckoned there was a shoal of at least 200 of them in front of me. However, as quickly as they arrived they were gone and, apart from a small Lizardfish, that was the end of the action. Headed back to the hotel for the last time only really having scratched the surface over the few days I'd been fishing (on one snorkelling session alone I counted 16 different species of fish). However, I'd had a great time and a few beers were consumed that night. Anyway, who knows...my licence is valid for three years?! 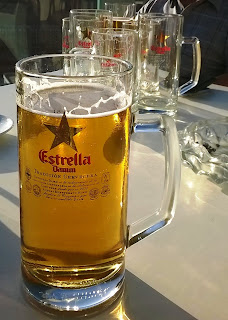 Was due to go to on an all-inclusive trip to Gran Canaria for week for a friend's 50th birthday. After reading about Scott Hutchinson's trip to nearby Lanzarote on his excellent blog (something-fishy-going-on) I knew that there was lot's of potential for some LRF while I was there. We were going to based at Taurito in the south-west of the island and some searching on the web and on Google Earth revealed some interesting spots, notably at neighbouring Puerto de Mogan. I also noted quite a bit of discussion on various forums about licences. Legally a licence is required for fishing from the shore in the Canaries. Quite a few people suggested winging it and pleading ignorance if checked by their wildlife police. However, others said that this wasn't really tolerated and risked a fine and confiscation of tackle. I therefore decide to err on the side of caution and, after a bit more searching on the web, found a company offering to sort out licences for you online for a cost of 40 Euros (Gran Canaria fishing licences). After an exchange of emails with a very obliging chap called Sunny, I was in possession of the necessary permit, valid for three years! 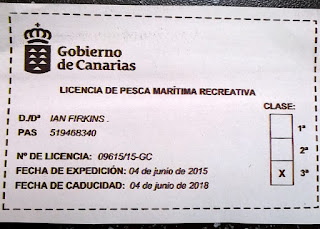 We were taking a bag of snorkelling and walking gear as hold luggage, so I put together a selection of LRF gear including soft plastics, metal lures, jigs, hooks and weights, along with a few floats. Managed to pack everything, including my reel, into a ice-cream tub sized, plastic container, which just left the rod, my 7ft Sonik SK4 travel rod, in its protective tube.

Day of departure duly arrived and after a four hour flight and another hour in the car, we were getting ourselves acquainted with the hotel, specifically the bar! However, next day we were down at Puerto de Mogan for a recce. The town has a nice big marina that unfortunately under Spanish law is out of bounds for fishing. However, the breakwater protecting the beach had looked good on Google Earth and didn't seem to disappoint at first glance. 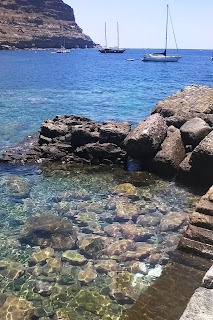 A swim around with the mask and snorkel revealed a host of fish swimming amongst the rocks, a number of which I recognised from my research. It wasn't long before I had a dropshot rig set up with a Berkley Gulp! Angleworm on a size 10 worm hook. First drop in and the rod top started rattling immediately as fish attacked the bait. After a couple of over-enthusiastic strikes, I lifted into my first fish of the trip, a small Ornate Wrasse. 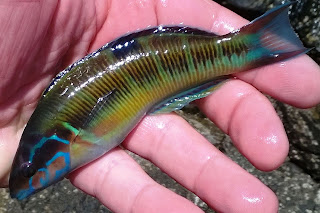 The water was clear enough to be able to see fish circling around the bait and again I recognised one of my target species as being amongst the crowd drawn in by the Angleworm. Another determined rattle on the rod top resulted in one of these, a Canary Damselfish, coming to hand. 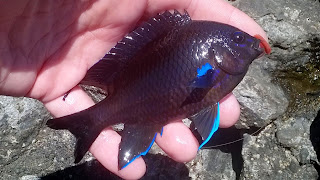 It soon became apparent that these two species were the most abundant, but also the most aggressive as anything else didn't get a look in. Ended up catching a dozen of the damselfish and half a dozen wrasse before the tide dropped, exposing the rocks and sending them off into deeper water. Had a wander around the marina before we left and was stunned by the number and types of fish that could be seen, including large shoals of mullet and several types of bream. 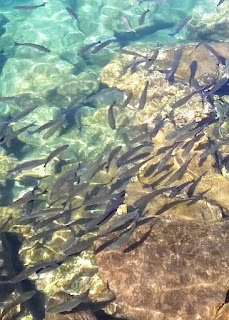 The following day we had a drive up to Artenara, the highest town on the island. However, the route back to the hotel took us past Puerto de Mogan again, so I was able to get another couple of hours fishing in. This time I was able to get out onto an old section of the breakwater that gave me access to some deeper water. 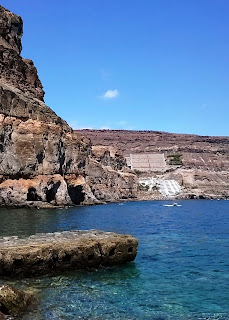 Started off with the dropshot and Angleworm and soon had the wrasse and damselfish queuing up to take the bait. Had taken several of each and was thinking of changing tactics when something different popped up. Had a good idea what it was, but later confirmed it as a Macronesian Sharpnose Puffer fish - a bit of a mouthful for a funky, little fish. 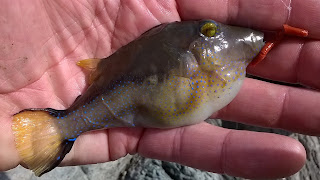 I'd spotted some big Redlip Blennies whilst out snorkelling and could now see several of them sat on top of the bigger boulders. Swapped over to a cheburashka rig, again baited with Angleworm. Tried to lower this into a position where the blennies would see it. However, they appeared to be more rig shy than the other species, disappearing down the sides of the boulders. By the time they re-appeared the wrasse and damselfish were all over the bait. After a few more of these aggressive little beggars I packed up and headed back to the hotel for a well-deserved beer.
Posted by Toodle 2 comments: