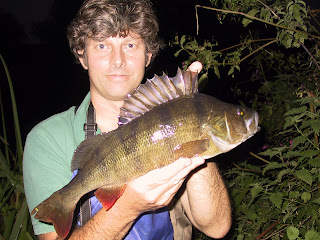 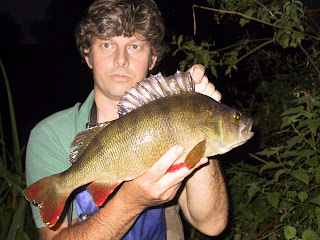 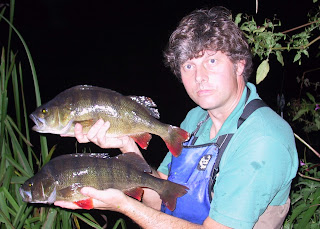 With zander cropping up on various blogs, I thought I'd get in on the act. I haven't fished for zander since the fens in the mid-90's so, whilst I wasn't expecting the same sort of stamp of fish, just to catch one after all that time would be nice. 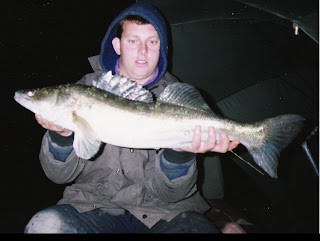 A long, long time ago in Cambridgshire!
Therefore met up with my mate Tim on a nice, tree-lined section of the Trent and Mersey Canal near Burton after work. Previous intelligence gathering had indicated that there were plenty of small zander averaging 3lb in the area, but with the chance of the odd bigger one. Soon had two small, hair-rigged deadbaits cast out into likely looking gaps in the far bank vegetation. Would have preferred a longer drop on my bobbins, but had to compromise and sink the rod tip to combat the amount of leaves and general rubbish floating down the canal. Tim had done his usual job of arriving completely unprepared, but was at least able to cobble together a float rig that he dropped in the bay opposite us. 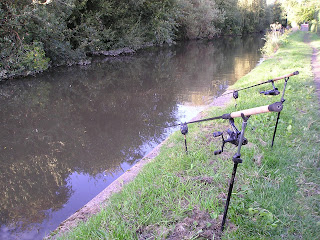 Waiting for a Zed
Tim was actually first in the action with a couple of jacks. I missed my first take, but connected with the second only to find that it was also a small pike. The next take felt a bit more like a zander, but turned out to be a perch with a liking for a roach tail section! Next take was again from a pike. Tim in the meantime had got out his whip to catch some more bait and had added a couple of ruffe. Seems we were only missing a zander for the full set. Didn't have to wait much longer. A stuttering take on the downstream rod resulted in a small, but perfectly formed canal zander that was hooked well inside the mouth by the size 6 single. 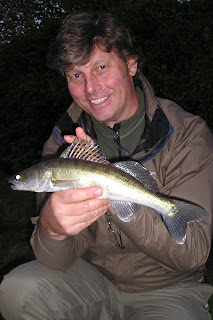 Mini Zed
The next couple of hours saw plenty of interest in the baits and at least four proper runs that I managed to miss. Finally connected with another fish just after Tim had left for the chippy, a second zander of about pound and a half. Carried on for a bit longer, missed another run, but had to give in to my own stomach in the end. An interesting session and one that re-inforced how frustrating it can be fishing for these things.
Posted by Toodle No comments: 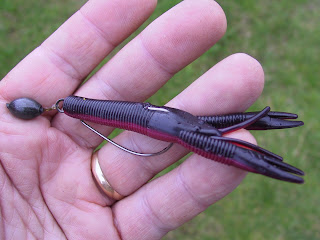 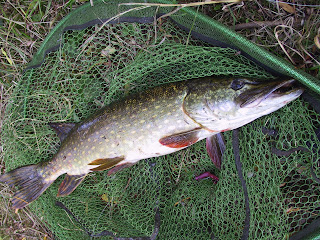 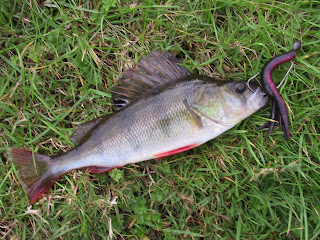 Perch like crayfish too
Carried on downstream, dropping the lure into any chubby looking spots. Had a few more bangs and knocks, but didn't connect with anything else. Will have to go back and go for the "treble" another time.
Posted by Toodle No comments:

Headed back to Borrowash for another short perch session. Arrived at about 4.30 pm to find conditions a bit more difficult than last week, with a strong upstream wind making trotting in the low flow slightly tricky. However, didn't take long for the bleak to arrive again and a perch paternoster was duly dropped in the side to await proceedings. Carried on trotting and was soon catching the usual variety of species, including bleak, roach, gudgeon, chub and dace, with the latter being a nice "hand-sized" stamp of fish. 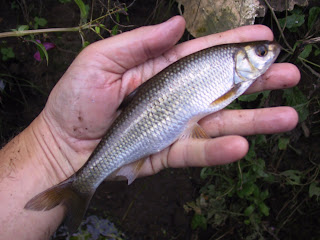 I'd be happy catching these all day

After about half an hour the perch rod bent over as something took the bait. Other than feeling half-decent, I wasn't sure what I had on as the fish decided to swim towards me. As it drew level with me I leaned backwards for the landing net. Unfortunately, the BIG pike attached to the other end of my line chose this moment to set off for the other side of the river like a torpedo, taking me by suprise and smashing my 8lb wire hooklink in the process. "Oh dear", I said quietly to myself! Carried on catching bits, but didn't have anything else on the perch rod until there was a change in the weather. Wind started blowing downsteam and it suddenly got very gloomy. That seemed to be the trigger for a stuttering take, resulting in a perch of just under a pound. He must have had his mates in tow because I caught three more of similar size in the following three casts, the piscatorial equivalent of being mugged by a bunch of hoodies! Was disappointed following this brief and hectic spell that I didn't have any further action on the perch rod, although I enjoyed trotting and catching bits for as long as I could see the float. Left the swim to the slugs at around 8 pm. 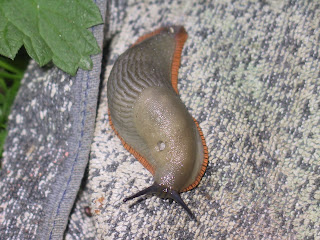 You're lucky I'm not chub fishing!
Posted by Toodle No comments:

First session back on the rivers after a long summer holiday in France and Wales. Failed dismally to catch my first bass. Next opportunity is North Devon in October, so fingers crossed. Anyway, September is usually the time I start fishing for the predators so, with that in mind, I headed for the Derwent at Borrowash. Arrived to find my favourite swim completely overgrown. No worries, at least I knew nobody had fished it recently! 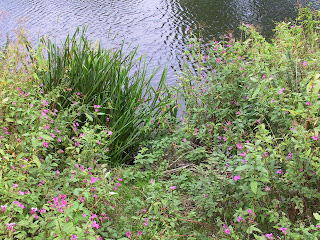 It's in there somewhere!
Tackled up the rods, put everything to hand on the bank and took up position in the water. Second trot down with the float rod I had a bleak. This went straight on the perch paternoster, which was cast down the side to my right. I didn't even have time to put another maggot on the hook before the perch rod started bouncing in the rests. Looked up to see a commotion on the surface as something hit the bait. Wound into what I thought was a small pike at first, but soon had my first Derwent perch of the season in the net. Was a very hollow fish of 1lb 14oz that should easily go over 2lb in better condition. 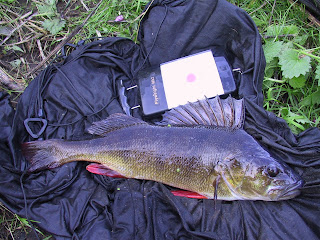 Carried on trotting and was soon catching a procession of bleak, small chub, gudgeon, roach and the occasional clonking dace. However, had to wait another hour for some more action on the perch rod. Another very positive take, resulting in a fish of 2lb 2oz (some people have spoken about their "bogey weight" for perch, well 2lb 2oz seems to be mine!). 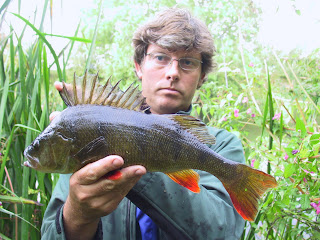 First 2lber of the season

Had another run soon afterwards, but the fish dropped the bait. Hopefully a small one! With about half an hour of light left I wound in the float and concentrated on the perch rod. Had one last take before it got dark. Unfortunately it was a jack of about 8lb, which gave me a good scrap on the light gear. Took that as an opportune moment to pack up. Not a bad start and definitely good to be back!