A two week holiday in Tuscany with friends just 20 kilometres from the coast seemed an ideal opportunity to add a few more exotic species to the list, so when one of them said they would be driving down in their van and would they like us to take anything the deal was sealed. 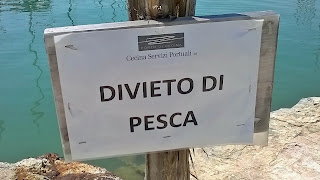 Cecina was our nearest town and a quick look on Google Maps confirmed a few interesting features such as a number of breakwaters, a river mouth and a large marina. The latter seemed the most attractive option. However, a quick recce one morning found all of it to be out of bounds for fishing apart from on the outside of the breakwater protecting the marina entrance. 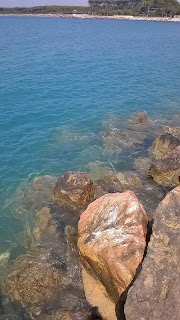 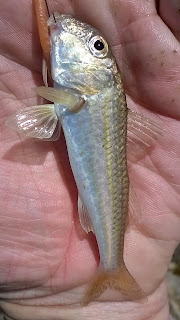 Even so, it looked pretty fishy with large boulders giving way to sand further out. A couple of locals were float fishing off the end with bolognese-style rods and there were some shoals of small fish and the odd mullet knocking around, so we made plans to return with the LRF gear. Unfortunately, when we did so we found it hard going to the extreme. Dropshotting angleworm off the end and between the rocks attracted tiny saddled bream and a few gobies or blennies that just pecked at the bait.


Casting further out onto the sand resulted in a couple of rattles and the baits bitten in half before I hooked a tiny striped red mullet, which was at least a new species for me. A switch to small metals again only resulted in one, half-hearted snatch on the drop. Don't know whether it was the temperature, time of day or the fact that the area had been hammered. However, we gave it another go a couple of days later and blanked completely! All in all, very disappointing.

By complete contrast, when we got back to the UK we made arrangements to go and pick up the stuff our friends in Exmouth had kindly dragged halfway across Europe. Again, not to waste an opportunity, arrangements were made for the lads & dads to head down to the "docks" (a bit of a grand description!) for some species hunting. Saturday evening saw us head down to the area around the new launching ramp for a couple of hours before dark. 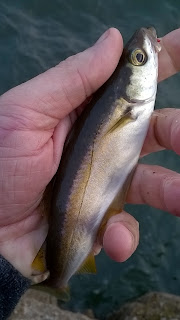 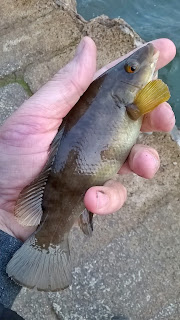 It was windy and pretty choppy and the floating weed was a pain. However, fishing around the boulders the boys soon started catching lots of small pollack and ballan wrasse and the odd shanny on bits of ragworm on scaled down paternoster rigs. This kept me busy unhooking and re-baiting hooks, so it was a while before I managed to wet a line myself. Dropping down the side of the ramp I had a tompot blenny and was then busted off twice by something big before landing my first corkwing wrasse of the year. 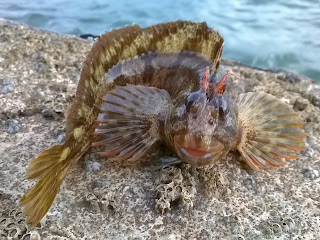 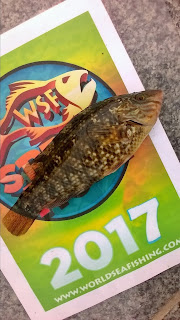 Fished on for a bit longer, catching more pollack and wrasse, but the failing light and weather conditions were making things tricky. Packed up and headed home, but not before witnessing four drunken blokes drop their speedboat off the trailer and send it skidding backwards down the launching ramp. Don't know what they were doing launching at that time of night and in such poor conditions anyway, but it was lucky nobody was stood behind it at the time. Left them assessing the damage to their outboard and working out how to get it back on the trailer!

Next morning we were back nice and early to catch high tide. However, there was a strong current rushing past the launching ramp that was causing some fierce back eddies, so we headed for our other spot near the "compass" where we knew there'd be some quieter water. 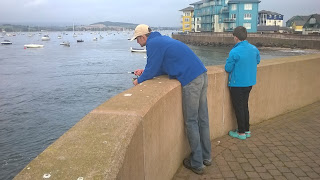 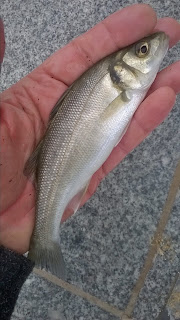 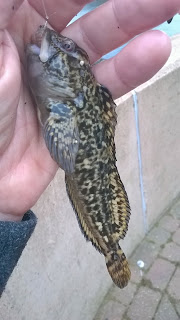 On arrival we found that there was a big shoal of sandeels in front of us and in the bay to our left. These were attracting attention from the terns, who were dive-bombing them from above, and then occasionally they would scatter on the surface as they were targeted by something from below. It wasn't a surprise that, with all this food about, the pollack were present in numbers and they were quick to attack our baits, followed by wrasse and a schoolie bass that was followed up to the surface by his mates. 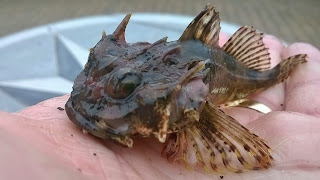 As slack water approached and the eddies disappeared the shannies started to appear from their cracks and crevices, along with a very angry little long-spined sea scorpion. Fishing closer to the structure at the entrance to the marina I had three larger ballan wrasse in a row that really tested the LRF gear as they battled to get back into their boltholes between the pilings. 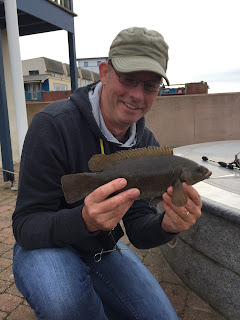 The biggest surprise was yet to come. As things slowed down I tried a cast onto the sand beyond the rocks and had a rattle on the rod tip straight away. As I wound in the resulting fish I what it was straight away - my first common dragonet. Not a flamboyant male unfortunately, but another addition to the species list. 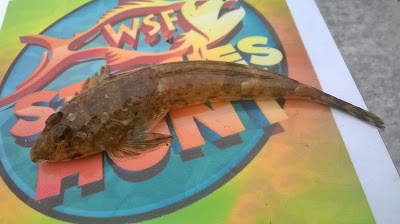 Carried on for a bit longer, but then was distracted by some large, grey shapes in the water below us, which turned out to be a couple of mullet in the 5-6lb range. Watched them as they turned on their sides to graze on the algae growing on the wooden pilings before they disappeared again. Took that as a good moment to bring a cracking session to an end. Hurrah for Exmouth!