Whilst it was a bonus to catch that PB croc last time out, I'd actually failed completely in my primary objective to add to my tally of Trent zeds. Unfortunately I didn't another chance as family issues again took over. By the time things had calmed down there had been a change in the weather, with cold winds from the north accompanied by overcast days and a plunging barometer - perfect deadbaiting conditions! 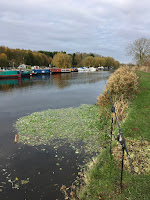 Had just enough flexi in the bank to take a half day, so early this morning I headed off and joined the line of red tail lights snaking south down the motorway. Arrived at the river at first light and made my way upstream to my usual starting point. Thankfully the beds of floating pennywort had all but disappeared and I was able to flick a few pieces of chopped up bait that had seen better days into the margins as I went. Within a few minutes I had a float-legered smelt soaking in the edge upstream and a mackerel on the same rig downstream. However, my pre-baiting tactics were soon scuppered as two chaps appeared with motorised trollies laden down with enough gear to pitch base camp at Everest. 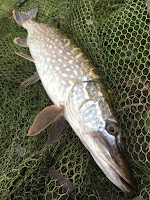 Sod's Law they chose two swims downstream that I had intended to leapfrog the rods through. However, their appearance was not without benefits as one of them came over for a chat and mentioned that the pike had been a particular nuisance for one angler during a match at the weekend and went as far as to name the peg number. After an hour and a half without a sniff I therefore set off further upstream to the area he had indicated. The peg itself was on the inside of a sweeping bend, but apart from this there weren't many physical features. Popped the smelt upstream alongside a clump of dead rushes clinging to the near side margin and then gave the mackerel some welly so it laid tight to the pilings on the opposite bank. 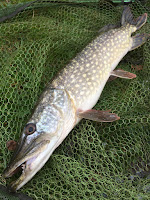 The baits had hardly settled before the upstream float bobbed a couple of times then waddled off, resulting in a mint little jack. He was kind enough to give me my bait back, so I dropped it in the same place. Ten minutes later it was off again and another jack was bundled into the net. Had to replace the bait this with another, still frozen, smelt. Dropped it in the spot again and hadn't even got the rod in the rests when it was picked up! However, the culprit must have decided that it didn't actually want a smelt lollipop and it was quickly dropped again. Had just re-set the drop off when the other rod nodded signalling a take. Wound down into a fish that put up a bit of intial resistance before letting me drag him over the river. 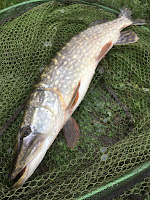 Once in the near margin he re-joined the battle under the rod top, scrapping well over his weight. Unhooked him and popped him back and was just getting a fresh mackerel out the bag when the other rod went off again - this was getting daft! Less than half an hour after dropping into the swim jack number four was in the net. Took a few minutes to sort out the rods and re-position the baits, but as quickly as they appeared to have switched on the pike switched off again and the next hour passed without any further interest. Walked back downstream at this point, thanking my friend for his hot tip on the way past, and settled into my one remaining pre-baited swim for the last hour. Dropped a smelt into the margin, then launched a section of lamprey into the mouth of the side channel on the opposite bank. 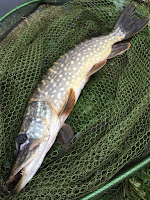 Sat intently watching the margin float as I was sure it was going to be the one that went first only to hear the buzzer signal a take on the other rod. Unceremoniously winched a micro-jack across the river with the lamprey sticking out his mouth like a fat cigar. Quickly returned him, letting him keep the bait as reward for his bravado! Didn't bother rebaiting this rod as my time was running out and I concentrated on the margin float once more. As expected it eventually headed off towards Kegworth and jack number six soon hit the net. Time was well and truly up at this stage, so packed up and headed back to the car. Hadn't broken any records, but it had been good to be out and get my string pulled before the weather goes windy and cold later this week.
Posted by Toodle 2 comments:

October flashed by without me wetting a line - more pressing family matters to attend to, followed by a well-earned break in rural France. With things settling down I thought I would take advantage of the continued mild weather and fish some short sessions into dark for the zander. Last seasons zander "campaign" consisted of one trip out onto the cut where I was lucky enough to catch a new canal PB of 8lb 4oz. This time, however, I would be concentrating on a section of the River Trent about 15 minutes from home where I'd had zeds of up to 9lb+ in the past. 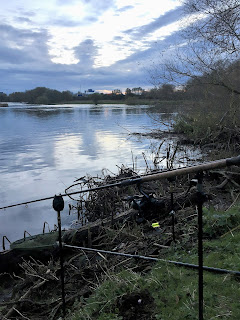 Conditions on the first session seemed perfect - overcast, mild and still. Settled into a previously reliable swim dubbed the "snag pit" and soon had two rods out with a "top & tailed" roach on one and a 3" lamprey section on the other. Was still light when I had a drop back on the lamprey, which had been cast into open water to my right. Wound down the slack and struck into what I thought was the bottom....until it started to move! Whatever it was felt very, slow and heavy and it was intially just a case of steering it away from my other rod and the trees. However, once in shallower water it woke up and there was a couple of big tail slaps on the surface before it shot towards the reed bed to my right. Thought I'd stopped it in time but realised from the grating sensations and angle of the line that it had run through an unseen snag. Slackened off to see if it would free itself, but just kept winding it back into the snag.

Eventually the inevitable happened and everything locked up solid and I could no longer feel the fish, it presumably having shed the hooks. Pulled for a break with the wire trace coming back "pig-tailed" just above where the top hook would have been. To say that I was gutted was an understatement, particularly as I carried on for another hour and a half without another sniff. 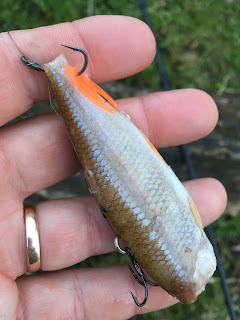 The following session proved to be a total blank despite renewed enthusiasm and some fresh deadbaits, so tonight was really make or break. Ignored the snag pit this time and instead settled into the next swim upstream, which gave access to a lot more water. Put the roach straight out in front of me and then cast the lamprey down alongside the margins to my left. The bailiff arrived shortly afterwards and we had a quick chat before he took his leave and I settled down properly to await proceedings. Once again it felt a lot milder than forecast, which brought a late plague of midges buzzing 'round my head. Darkness brought some respite from the little buggers, but I'd not had a twitch on either rod until, completely out of the blue, the bobbin on the margin rod dropped off. Picked up the rod and felt the line pulling slowly through my fingers before winding down into what felt like another lump.

Steered it away from the trees into open water where I was confident that my balanced tackle would do the job and after a couple of short runs and more tail slapping I had the fish on the surface and sliding over the net. I'd not had to use my head torch up to this point, so it was only when I went to lift the net up onto the bank that I realised how big the fish was - not a zander, but a very decent pike. Quickly got it unhooked, into the sling and onto the scales. Thoughts of a twenty briefly went through my mind as the arrow span 'round the dial, but it eventually settled at 19lb 10oz, still beating my previous best by an ounce. 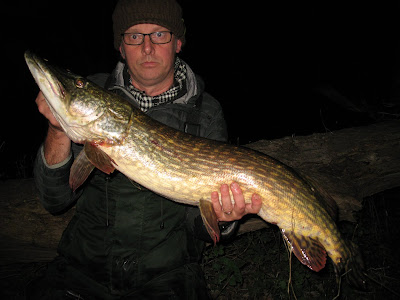 Snapped off a couple of photos and then had a good look in it's mouth where a recent mark on the lower jaw suggested that this could have been the fish I'd lost a few nights earlier. Let her rest in the net in the margins for a bit before watching her swim away strongly into the darkness. Had no further action, but couldn't have cared less really. Went home in a much better frame of mind, but certainly puzzling over the apparent lack of zander.
Posted by Toodle 3 comments: