First trip of the year and the weather was much more typical of grayling fishing than just before Christmas - zero degrees and a frozen windscreen! 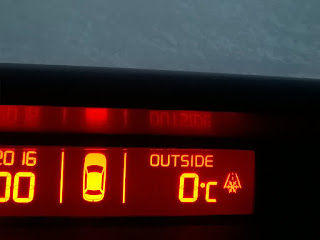 Had aborted once this week already after overnight rain had pushed the river back up. However, no such repeat and, whilst the river was still up, it was dropping nicely according to the graph, so I confidently made the drive over to Staffordshire. Arrived about 9 o'clock to find nobody else there, so parked up and squeezed on the neoprenes, exchanging comments about my sanity with the woman at the stables while I did so. Walked across the fields, my feet crunching through the thin, frozen layer on top and into the saturated soil underneath, leaving a trail of muddy footprints in the frost behind me. No doubt which way I'd gone if somebody was to turn up later! Found river exactly as predicted, up slightly with a tinge of colour. The "banker" swim looked a bit boily, but gave it a go. However, found myself biteless some 20 minutes later, so headed down to the next spot. This was a bit steadier and a few trots later I had my first grayling of the morning in the net. 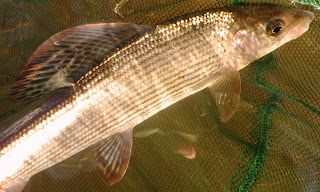 Had a couple more, then moved on again, criss-crossing the river looking for the quieter pockets of water out of the main flow. The next few spots only yielded up a couple of fish in each one, so I suspected that they were shoaled up somewhere due to the combination of the weather and the higher river levels. I just had to find them. 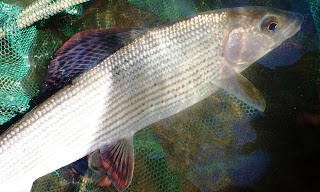 Like last trip the typical stamp was in the 10 -12 ounce bracket and female. By mid-day I'd had about a dozen from various swims when I came to a small slack on the inside of a bend. 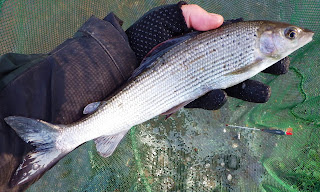 It was only about 18 inches deep, but with the current pushing quite quickly through the normal holding spot on the far bank, it looked a promising place where fish could hang out in some quieter water. So it proved. 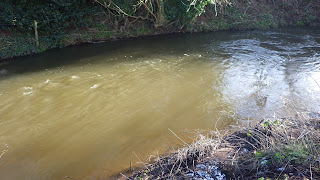 Sat in the sun and ate my lunch, feeding a few maggots down every so often, before I eventually sent the wire-stemmed stick float on its way. Had only travelled a few feet before it disappeared and the strike met with the re-assuring thump of a fish. After the first one it was virtually a bite a trot. They must have been stacked up in there. Eventually hooked one that put the Drennan Ultralite through its paces, kiting across the current to the far bank and back again, before going airborne a couple of times. Turned out to be the biggest fish of the day - a male of 1lb 3oz. 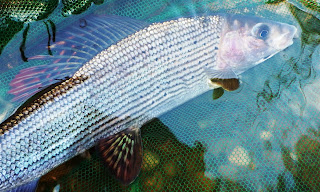 Popped him back and had a couple more before I struck again into another heavier fish that came straight to the net without any fuss. It was the male I'd had a few minutes earlier - obvious from his dorsal fin. He must have gone straight back to his station and carried on feeding! Had fifteen fish out of this spot before letting them have a rest. Winkled out a couple more downstream to take me up to 30 for the day. Sky had started to go black, so I thought it was a good time to finish and headed back to the car. Unfortunately, not quite in time to avoid a nasty little, sleety shower. However, certainly didn't put a dampener on the day, although I'm wondering now where all those mythical two pounders are that the club say are there!
Posted by Toodle No comments: