Arranged to have a quick session down on the cut for the zander with my mate Tim. In contrast to the previous weekend it was bright, warm and sunny. Possibly not the best weather for zeds, but couldn't really complain and by tea time I was desperate to get off. Unfortunately things started to go downhill from there. A text from Tim announced that he wouldn't be able to come after all. Secondly, I got delayed on a congested M1 and didn't get down to the canal until gone 7pm. Finally, with the sun disappearing, I rushed to "the spot" only to find it occupied by three yoofs, each with two rods out for the carp. Set up some way downstream from them with a view to leap-frogging down to the next lock. Soon had two rods out with half deadbaits on single hook rigs, one in the far margin and one down the middle. Was still light when I had a pick up on the margin rod. Fish shot off like a torpedo when I struck, heading straight through my other line. Luckily a competent dog walker was on hand to net a very angry pike of about 6lb. Sorted out the tangle and got both rods back in as it got fully dark. Soon had a pick up on the rod down the channel resulting in a stolen bait, but then had to leap-frog down a couple of times before I got another run. This time the hook gained a solid purchase, resulting in a small zander. 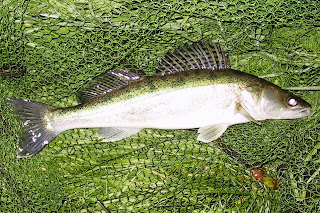 The carp yoofs went around 9pm, so I decided to drop in on their swim and try my luck there as I'd had no further interest after that zander. Unfortunately, the sole action was to wind in both rods an hour later! Was so still and clear by this stage that I could see The Plough reflected in the surface of the canal, which was like a mirror in front of me. Left for home having collected three Sainsburys carrier bags full of food wrappers and empty boilie bags (bless 'em!) and scratching my head once again.......
Posted by Toodle No comments:

A conversation with my friend Tim whetted my appetite for an early return to the Trent. I still had some Brownie points left from finishing the decorating at the weekend, so set off down to Swarkestone after work again. Headed for where I started last time, but with just one small roach and a perch to show for an hour's work with the float rod I was left scratching my head. Thought a move was probably best rather than keep feeding an obviously empty swim, so headed right down to the end of the section where I could at least see some fish showing on the surface. Proved to be the right decison in one respect as I ended up having a cracking session on the "stick". It was virtually every throw a coconut as I dropped on a shoal of chublets, with some decent roach and a few dace, bleak and small perch thrown in as well. As usual, I got carried away with the simple pleasure of watching a float sail down the river and disappear. Kept telling myself, "just one more cast, one more cast"! It was only a tangle that finally made me put down the float rod and set up the paternoster with just over an hour of light left. Gave the float swim a rest and dropped in the next spot upstream. Bait had been in for nearly 30 minutes and I was about to move it when the rod tip started nodding away, resulting in a greedy perch of just 3/4lb. Moved back into the float swim but had no interest whatsoever until it was fully dark when I had a smash take from a pike that mangled the hooklink and effectively ended the session. 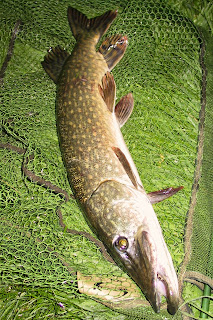 Not the start to my autumn predator campaign that I'd anticipated. Feel the need for some zander therapy.......
Posted by Toodle No comments:

Finished decorating another bedroom at the weekend, so promised myself some time off. Talk of the "last day of summer" had started me thinking about the predators again, so the perch gear was thrown together for a evening trip to the Trent near Swarkestone. Nearly didn't go as it absolutely chucked it down just as I was leaving the house, but I convinced myself it was only a shower and set off. Arrived to find a few changes since I was there last. The nettles were easily head high and virtually swamped the path. A group of game old ladies out for a ramble had warned me how bad they were as I was leaving the car, so I was glad I had the foresight to put full waterproofs on. The pegs weren't much better, in fact I got lost trying to find my first swim! There was some evidence that the peg had been fished, but not much. Also, the small bay to the left was now choked with arrowhead, rather than the thin floating weed that had been there before. 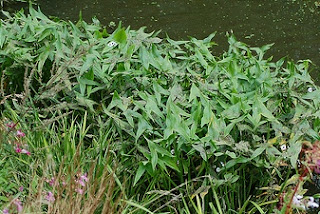 Got the float rod going anyway and was straight into perch, lots of them - unfortunately mostly around 2oz, although one of about 3/4lb gave me a good run around. The silver fish were noticeable by their absence so, after a couple of hours hard work, I had only managed to scrape together half a dozen useable bleak and roach. Got the paternoster rod out and dropped a bait into a gap in the arrowheads. Didn't have to wait long before the tip started banging and I struck into a good fish. Unfortunately it was of the green and spotty variety and made a point of visiting every corner of the swim before I got it into the net. 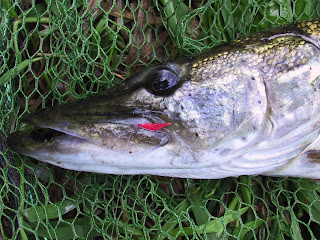 Thought a move was in order after that disturbance, so struggled down to the next swim. Managed to snag my centrepin on the nettles on the way, so a good 5 minutes was then spent recovering a 50 metre loop of line and getting well stung in the process! Eventually got the paternoster out into a gap under some trees. Had to wait a bit before the rod tip showed signs of interest and, after a particularly dithery take, struck into a perch.....all 1/2lb of it. Carried on until dark, but didn't trouble the scorer further. Oh well, can't catch 3lbers every trip can you? 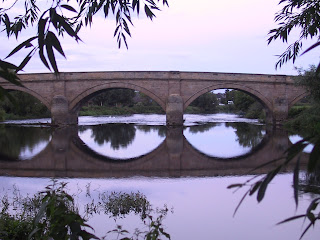