Another short evening session on the lake. Not quite ready for an overnighter yet. Takes too much organising and I'm liking my bed too much at the moment! Arrived to find that fish spotting would be impossible due the "chop" on the lake (Is anybody else fed up with this wind? It feels as if it's been blowing since March!). I therefore settled into the same swim as last time in the hope that there'd be at least one carp mooching around the margin of the island. Set up as before, carefully avoiding the huge deposits of Canada Goose sh*t! Had to wait until it was just getting dark before any sign of a fish. The geese were just making their usual, very noisy, way onto the island to roost for the night when the right hand rod rattled off out of the blue. Could tell by the dashing around that it was a common, rather than one of the plodding mirrors. On the bank it went a shade over 12lb (note I managed to capture a nice "deposit" in the top right of the picture). 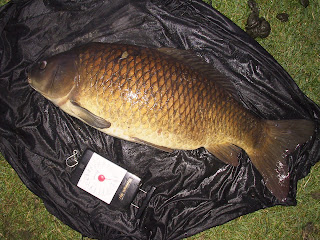 A carp!
Packed up shortly afterwards and left the geese to their bedtime routine.
Posted by Toodle No comments:

Have been a member of a carp syndicate on a small estate lake for the last couple of years. Haven't exactly set the world on fire in that time, just through not getting the hours in, and was thinking of giving the ticket up this year. However, something made me decide to give it one more go, so I parted with the cash and dragged myself out for a short evening session. Set up in my favourite peg opposite a small island. Two rods with flavoured, artificial corn on KD rigs (www.korda.co.uk/rigz/?id=8) went out over a few spods of hemp and sweetcorn. The third rod fished a small fluoro pop up out in open water. Was soon getting indications on the bobbins and a stuttering take on one of the rods up to the island signalled the first fish. Not a carp, but a pigeon-chested bream of 8lb 2oz. 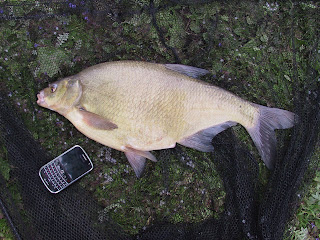 Rod went back out to the same spot and it wasn't long before the bobbin was jangling away again, resulting in a carbon copy of the first fish, albeit an ounce lighter. Unfortunately, it went very quiet after this. Fished on until just after dark, but had no further interest. Was perhaps a bit much to expect a carp first session, but those two bream certainly lifted me out of the doldrums.

Rest of April was pretty uneventful fishing wise, even though I'd sneaked some kit in the car for our trip to Pembs. Turned out we were too busy going to the beach, flying birds and building aviaries. Latest addition to the business is a Southern White-faced Scops Owl called Frodo, sometimes more parrot than owl! 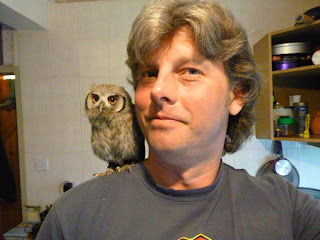 Parcel was waiting for me when I got home containing the fruits of my eBay sales. 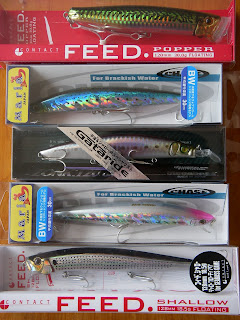 Got a chance to put them to use first weekend of May. Was down in Saunton for a surfing trip with the lads, but had arranged to meet up with a local guide, Joel Soul. A dawn start saw us heading for a small rocky cove on the North coast in time for low tide. Scrambled over the rocks down to the water level and started off with surface lures. Had just got hang of "walking the dog" with a Xorus Patchinko, when a fish came up and slashed at the lure. A bump on the rod top and it was gone, but it was enough to get the heart pumping! A few minutes later Joel shouted he'd got one on. His rod had an impressive bend in it, so I got the camera out to take some action shots. Unfortunately, at that moment, Joel lost his footing and ended up chest deep in a gulley. Slack line and the fish was gone. Gutted! We carried on fishing as the tide came in, changing over to sub-surface lures. The morning light turned to bright sunshine (via heavy rain!) and our window of opportunity was gone. Was extremely enjoyable despite the disappointment of a lost fish. Looking forward to a return trip later in the year. Look Joel up at http://www.joelsoul.co.uk/ if you're in the area.