After the success with the triggerfish I headed back to Pembroke Dock for a couple more sessions, but for slack water at high tide. Tactics and bait were exactly the same, a two hook flapper baited with raw prawn and/or a strip of squid dropped down the wall to see what was about. The bass certainly seemed to like the prawns as I had three plump specimens on this bait. It's been good to see that the bass size and bag limit is being publicised at various places around the county and whilst the biggest was probably just over the new minimum size of 42 cm it went back nonetheless. 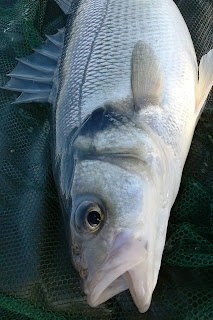 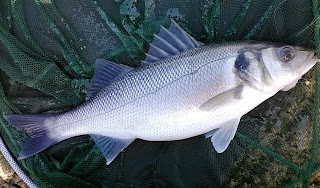 I've had a few wrasse at this venue in the past, so wasn't surprised that a nice ballan eventually turned up one morning, again on the prawn. The ones I've had before have been quite drab, but this one had fine blue detail to the edge of its fins and irridescent green spots on the tail. 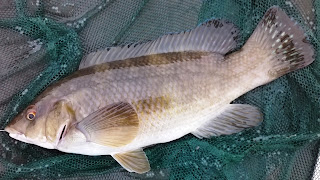 I'd been alternating between prawn and squid strip on the top hook, so when I hooked into a hard fighting fish I was pleased that a) it had actually taken the squid and b) the fish in question was a good mullet. I see plenty of these on the surface further up the estuary, but this one had taken a bait in 20 feet of water! 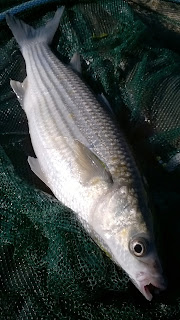 Perhaps if I'd had some ragworm then I would have had a few more fish, but I was happy enough given that I only had a very short fishing window each morning due to the spring tides. Milford Haven has an extreme range of nearly 8 metres on springs, meaning that there's a lot of water moving through it and that slack water doesn't stay "slack" for long! In order to stretch out the sessions I'd therefore taken a couple of lighter rods to use for LRF or scaled down bait tactics for mini-species in the quieter pockets of water. 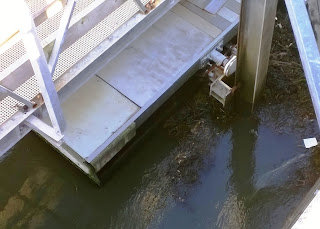 The most successful tactic of the two was a scaled down one up, one down rig with very short, 6lb fluorocarbon snoods and size 10 wormer hooks baited with scraps of prawn or squid. As usual the rock gobies were all over this, including some real "monsters". 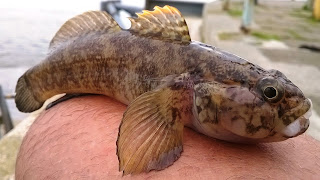 I had so many of these that I almost overlooked the fact that I also had a solitary black goby in amongst them all. 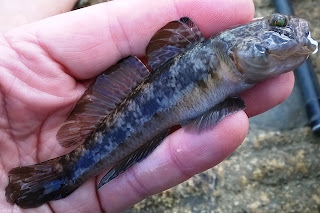 Not a lot else managed to beat the gobies to the bait other than a couple of micro-pollock and a slightly bigger fish which, upon closer examination of the lateral line, I decided was a juvenile coalfish. 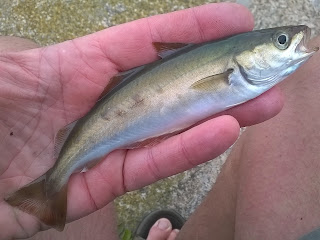 Did have a couple of surprises. Had a thump of a take on a tiny bit of squid in some relatively shallow water next to the car ferry ramp from what turned out to be a big mackerel. This gave an excellent account of itself on the light tackle (and later on my plate!). Swapped over to small metal lures at this point, but there didn't seem to any more about. 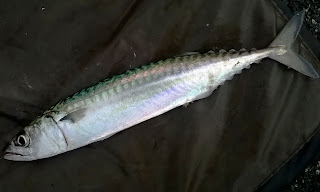 Another fish that took a liking to a tiny bit of squid and gave me a similar run around was another mullet. I've not got around to specifically targeting these yet, so hopefully they will be equally obliging when I do so. 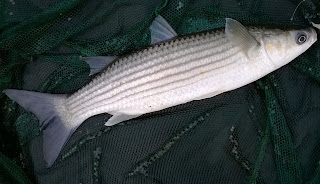 One bonus from my last session was that I managed to glean quite a bit of local knowledge from a friendly native, including the location of a bait and tackle shop that I'd been driving straight past on the way to the venue. Next time!
Posted by Toodle No comments:

Ever since I came back from Gran Canaria I've been hankering to get to the coast for more sea fishing. Chance finally came with a trip down to Pembrokeshire for the last week of August. I'd been watching the tides carefully and the first morning gave me an opportunity to fish low water at a mark that was becoming known for an unusual species at this time of year. My usual bait supplier was out of ragworm, so I had to make do with some frozen squid and some raw prawns from the supermarket - not a hinderance as it turned out. Got to the mark and had an exploratory drop down the side of the wall to find I was fishing in about 8 foot of water, instead of the usual 20 ft. 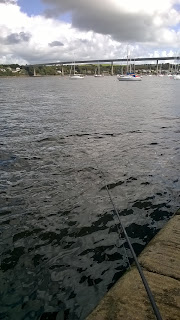 Sitting on the dock of the bay

Baited up my simple, two hook flapper with prawn and dropped it down the wall. Didn't have to wait long before the rattles started and was a bit over eager, striking into thin air. Next drop down was met by something more positive. Was expecting a small wrasse to pop up, so was over the moon when it turned out to be my target species - a perfect, little grey trigger fish. 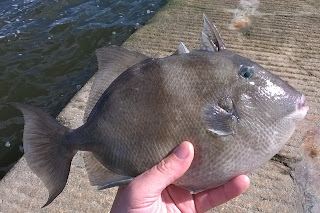 Took a quick snap and dropped down again and soon had another enquiry that put a proper bend in the rod. Again, I was expecting a wrasse as the fish fought like stink to get down to the bottom. However, one of the local boat owners turned up at this point and I think we were both surprised when another trigger fish finally rolled into the landing net. 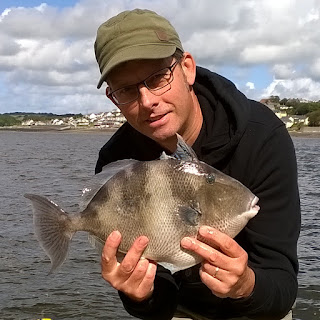 Next fish was a bit of an anti-climax as a little rock goby managed to snaffle my bait. However, next cast I was into another battle, with the fish banging away on the end of the line like a perch and making short, determined runs to the bottom. Turned out to be yet another trigger fish - the biggest of the morning and easily over 3lbs. 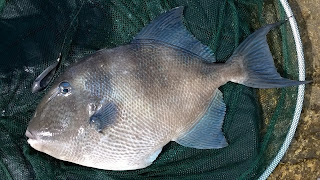 I was please with the first one....but three in four casts? They are really interesting fish. Mostly grey, but with varying amounts of striping and a flash of azure blue when they "cock the trigger" - the small, spiny dorsal fin. Also have some impressive dentistry for crushing shellfish....and fingers as I nearly found out when one gave me a warning "snap" of the jaws when I went to take out the hook! 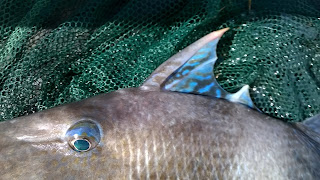 Went a bit quiet after this, so scaled down the rig and fished slivers of squid to see if there were any mini-species about. After a procession of rock gobies and suicidal micro-pollack I packed up and headed home for lunch - mission acomplished! 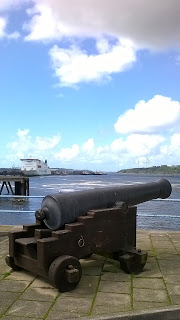