Don't know where the time goes these days, 'cus it doesn't seem like 5 minutes ago we last came back from Wales and we were off down there again for another few days before our main summer holiday in Italy. As I had failed to wet a line in freshwater in the interim, I was especially looking forward to having another dabble in the salt and adding to my species tally. However, that proved a bit difficult, not in the least because of the weather as it either tipped down with rain of blew a gale (or both!) most of the time we were down there. Undaunted, me and the lad set off for Pembroke Dock on the first morning to see if we could catch a mullet. At low tide in June the exposed mud next to the old car ferry ramp was absolutely covered in mullet grazing marks, so off we went armed with float rods and a couple of loaves, one of which had been previously liquidised, to see what was about. Unfortunately, apart from seeing one mullet appear briefly on the surface, we sat for two hours on the rising tide without a sign! At this point the LRF gear came out of the car and we made our way over to the other side of the ramp and then onto the pontoon. 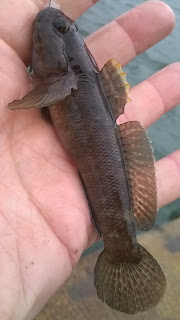 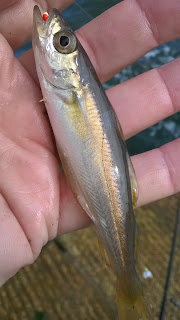 Here the fish were more obliging and it was a bite a chuck on bits of isome worm and raw prawn on either a dropshot rig or scaled down "two up" rig. However, it looked like it was going to be a goby monopoly, as we pulled out rock gobies in all sizes and colours. Eventually I spotted a few fish darting out the kelp on the side of the wall and a bait dangled closer to the waving fronds resulted in a few small pollack. As the tide started running I picked up a single sand smelt before we called it a day. 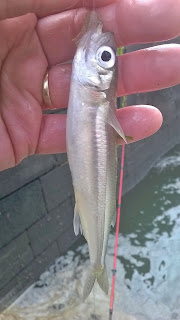 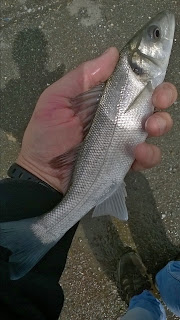 Next day I had to go to over to the chandler's at Neyland Marina for some fibreglass for the boat, so it was an opportunity to check out a spot on the other side of the Haven for a change. Unfortunately, we were a bit early in the flood as there was only a couple of feet of water at the bottom of the dock wall when we got there. Dropping our baits between the patches of weed a surprise bass to the lad first cast got our hopes up. However, after that we struggled to catch a couple of rock gobies between us.


Next morning the lad was off to help his Uncle with the family falconry business, so I made the trip back to Pembroke Dock by myself. Whilst it was dry, there was a strong wind pushing a swell straight up the Haven. Fishing down at water level off the ramp I had to watch out for the odd, rogue wave running along the wall and wetting my feet! Didn't stop the fish feeding but again, every time the bait hit the deck it was grabbed by a greedy rock goby. The bottom seemed to be covered with them, to the exclusion of everything else and after about 30 of the flippin' things I waved the white flag! 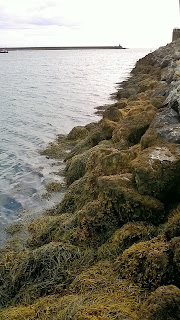 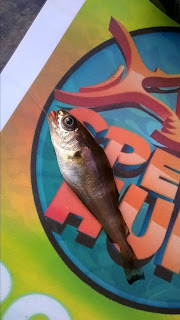 A couple of decent days followed that meant we could get out as a family onto the coast path and do some sight-seeing. When the final opportunity came for a quick session I was in a bit of a dilemma. Didn't fancy catching gobies all morning, so opted to go somewhere completely different for a change. First light therefore saw me heading to the North coast to fish the inner breakwater at the ferry port at Goodwick. Got there just before high tide and walked along to the end.


The weedy fringes and the rock armour on both sides of the breakwater screamed out wrasse, so I opted for a slightly beefier dropshot rig with a size 8 weedless hook baited with a whole isome worm. Soon found out that it was extremely snaggy and quite shallow, even right off the end of the breakwater. Switched presentation after a bit to a weedless jig head, but after about an hour I'd not had a touch. 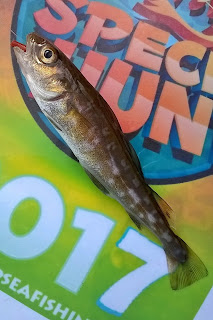 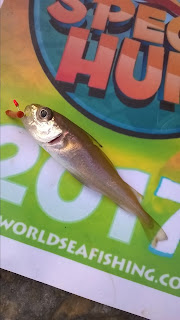 Spotted a shoal of sandeels and then a few small fish over some clear patches in the weed, so went back to the dropshot rig and scaled right down to a size 16 hook, which I baited with half an angleworm. carefully lowering the rig into the clear spots I soon had some rattles, eventually connecting with one of many small pollack. As the tide turned, the water level dropped exposing the weed.


I therefore moved back along the breakwater slightly. Don't know what made me choose the next spot, other than it was next to some crab pots, but I had three members of the cod family and three new species in consecutive casts! First up was a tiny pouting, followed by a codling, then finally a poor cod. Was back to the pollack after that before I got the call to say that the rest of the family were up and ready to go out. Overall, I was relieved to have pulled it out of the bag with the last session, but was a bit perplexed with the lack of wrasse over the week. Oh well, two weeks in Tuscany coming next and the LRF gear will be packed!
Posted by Toodle No comments: