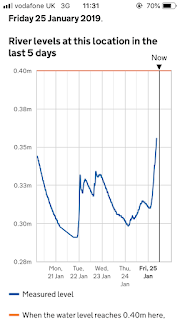 I'm usually meticulous in my session planning given my limited free time, but today I got things badly wrong. The plan was to have another day out in Staffordshire on a River Dove tributary. A quick check yesterday indicated that the river was dropping nicely down to the "perfect" level and, whilst there was a bit of rain forecast overnight, I didn't think it was enough to worry about. Set off before first light and arrived at about 0830 hrs, having had to negotiate a couple of hold ups on the A50. At first glance the river looked to be carrying a bit of colour, but was at a nice level, so I headed to the upstream limit and started fishing. Had a nice grayling early on, but then struggled for bites and it wasn't until I was in my third swim when I noticed that the river clarity and colour had significantly changed for the worst. A quick check of river levels on the phone confirmed that I was fishing on a rapidly rising river, presumably as a result of the overnight rain being more significant than I realised. Idiot! Rather than struggle on I headed back to the car to consider my options, kicking myself all the way for not double checking before leaving this morning.

The River Dove was closest, but a stiff downstream wind would have made things difficult at my preferred venue, so I ended up heading all the way back along the A50 to Derby and to the River Derwent again - where I probably should have been two hours earlier! 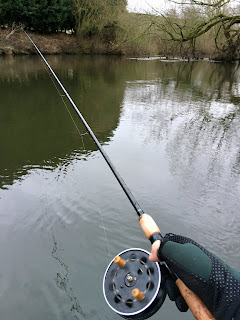 The weather was pretty grim when I arrived - grey, damp and miserable - which didn't improve my mood. I was also probably a bit under-gunned for the bigger river with my 11ft Drennan Ultralite and light stick float setup. However, got togged up again and headed for the long glide that I'd fished the previous weekend. Whilst the river was up slightly, the clarity was good, so I started fishing with renewed optimism. However, after about an hour stood in the drizzle and with just a couple of small grayling to to show for my efforts, I was ready to pack up. Instead, I decided to head upstream to find a bit of slower paced water where I could be a bit more confident that my bait was where it should be, i.e. on the bottom. Dropped in above the big tree again. However, where I had been able to wade well over halfway across the river on previous visits, the higher level meant I could only wade to the edge of the tree-line.

However, it also meant that there was a nice depth with an even pace close in - just what I was looking for.

Had a couple of small grayling straight away, but it wasn't until the last hour of daylight that they really seemed to switch on. At one stage I noticed fish boiling on the surface where I'd thrown in some loose feed. Thinking they were dace I watched a bit more closely and realised that they were actually grayling, coming off the bottom and intercepting the maggots before they sank. Sure enough, I had a flurry of fish, including several on the drop right in front of me. By the time the light had faded and the chill had finally got through my layers I'd had another ten grayling, so I was quite glad that I had persevered. 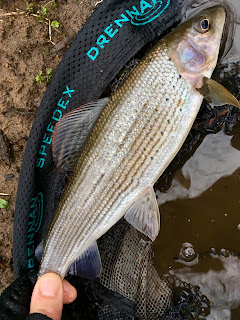 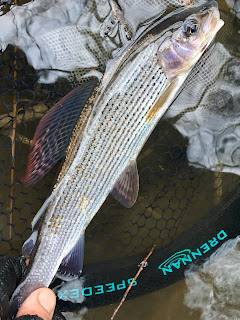 Headed back to the car feeling a bit better about my day, but I won't be making such a schoolboy error again!
Posted by Toodle 2 comments: 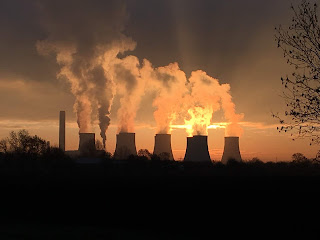 If the "meteorologists" at the Daily Mirror are to be believed, it appears that we are heading for the next Ice Age. However, to be fair, nobody seems to be able to predict the weather at the moment. Whilst there were various forecasts of rain, snow and sub-zero temperatures over the weekend, the reality at first light this morning was a bearable 4 degrees Centigrade and not a breath of wind. For a brief period, as the rising sun bridged the gap between the horizon and the blanket of low cloud, it was glorious. It even made the local power station look good.

The maggots I'd left in the garage from last week had survived surprisingly well, so I'd already decided that I'd return for another short session on the River Derwent whatever the weather. The benign conditions were therefore a welcome bonus and meant that I could have another go at the attractive, long glide that I'd been forced off by the wind last weekend. Even better, an empty car park indicated that I had the whole section to myself. 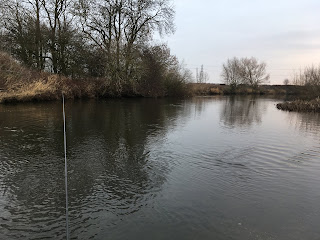 With hindsight, upon arrival at the top of the glide, I made the mistake of wading in straight away to fish the faster, deeper water over towards the far bank. I also made the fundamental error of not changing the hook link, the rod still made up from the last session, as I lost three decent fish in quick succession to hook pulls! Having got the message and changed the hook link I moved a few yards downstream. However, this time I chose not to wade in and just ran the float down the inside off the rod tip.

Second trot down the float disappeared and I was into my first grayling of the day. Several more followed from that inside line and when that dried up, I waded out a bit further to try another one. 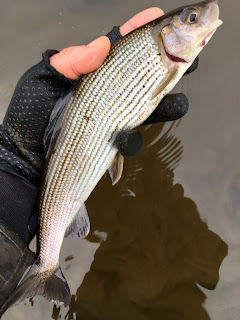 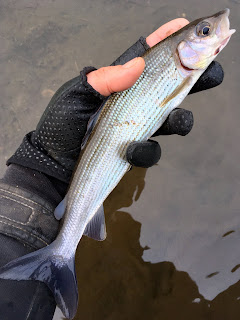 Carried on in that vein and by the time I'd reached the end of the glide I'd had fifteen grayling in a range of sizes to just over a pound. 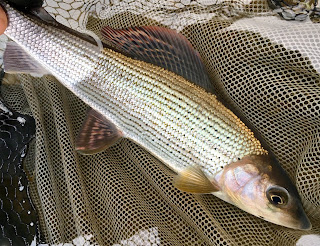 Had a quick look at a swim further downstream but, whilst there was a nice depth and a smooth, even flow, the bottom looked sandy and pretty featureless. After a couple of unsuccessful exploratory casts I was therefore itching to try somewhere else, so headed upstream and dropped into a swim I'd fished before, another nice glide down to a large, overhanging tree. Five more grayling followed before things went quiet there as well and my self-imposed rule of "ten casts without a fish" saw me move once more.


Unfortunately my hooking issues returned in the next swim with the first two fish coming off, before I eventually made another grayling and my last fish of the morning stick. Gave my last few maggots to a robin that had been waiting patiently in the bushes behind me and headed home for a late breakfast of my own. 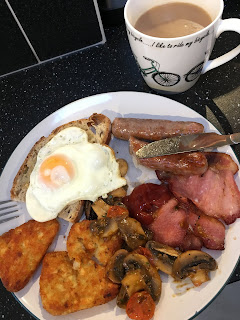 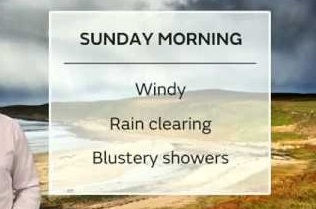 Spent all week at work this week looking forlornly out of the window at near perfect conditions for trotting on the river knowing that I would not be able to get out until Sunday at the earliest. To rub salt into the wound, the weather forecast wasn't looking great, with rain and blustery winds barrelling in from the West. Well, at least it was going to be mild! Had a think about where I could find a few, sheltered spots to run the float through and decided on the River Derwent near Draycott, which had the benefit of being only 15 minutes from home if conditions turned out to be completely unbearable.

As I got out of the car I was greeted by gusts and a fine drizzle, so headed upstream to where the trees and high banks would hopefully shield me from the worst of the weather. There had been one other car in the car park when I arrived and as I waded in to start fishing the first swim I spotted my fellow angler tucked into the spot immediately upstream! 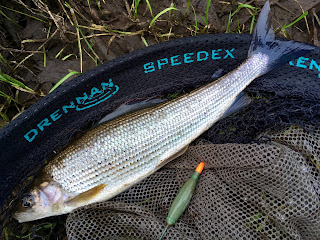 After making a hasty apology it transpired he was chucking a feeder to the far bank, so wasn't bothered about me trotting the inside line. Started off with double maggot on a size 16 Drennan widegape, but with no immediate interest I soon changed to a single maggot on a size 18. A bit later the float buried and I had my first fish of the morning - a grayling that somehow got the line lassoed around it's tail during the fight and was dragged unceremoniously into the net backwards. 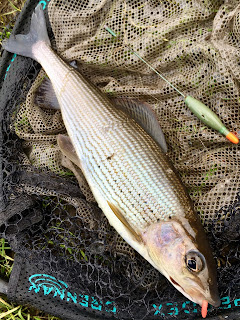 Carried on for another half an hour, but after just one more grayling and a bumped fish I moved downstream to the next spot. Had three more grayling fairly quickly before that swim apparently died as well. My fellow angler by this time had decided he'd had enough and had trudged past me without any acknowledgement, so took that as a sign that he'd not enjoyed his morning in the wind and rain! However, I decided to soldier on and moved downstream yet again. Again, it was a question of a couple of quick grayling then nothing, so it was obvious that the fish were well spread out, or not feeding hard, or both. En route to the next swim, a long glide that I'd earmarked earlier on the the way upstream, I bumped into another chap who was also fishing for the grayling, but with the fly rod. Stopped and had a chat and learned he'd had some success on the fly last season before wishing him luck and carrying on. 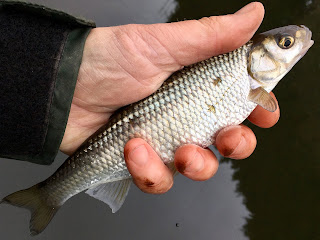 The wind had changed direction slightly by now and was gusting straight downstream, which was making it difficult to keep track of the float. However, I'd managed another three grayling when the float buried and I hooked into what was obviously the biggest fish of the day. Unfortunately, my joy was short-lived as the hook pulled out, making me rue my decision of dropping a hook size. I'd like to think it was a chub, but the brief fight told me otherwise. To rub it in, next cast I probably caught the smallest grayling in the river! Carried on until the strong gusts got ridiculous, having added a solitary, fat dace to the total, then headed home for some well-deserved lunch.