Carried on fitting sessions in for the zander where I could this month, including a couple more trips after work to the Soar and an afternoon on the Trent up at South Muskham. However, despite some perfect (and atrocious!) conditions and a new stock of bait, pickings were very slim and not entirely what I expected. After a blank on the Soar I found myself back on the River Trent in an old favourite swim - the snag pit. The river was up and coloured, but this made the swim even more attractive as it now provided the only slack area off the main flow. I was therefore pretty confident when I cast my two baits out just before dark. Unfortunately, the zander didn't seem to be in an obliging mood. It was well into full darkness and I was contemplating packing up when I saw the tip my left hand rod knocking. I'd cast this one short close to a tree to the left of the swim. Wound down and felt a fish kicking. Didn't feel that big and I assumed it was a small zed until I saw it writhing on the surface in the beam of my headtorch - yes, another eel! This one was absolutely nailed in the bottom lip by the size 6 single and went 2lb 12oz on the scales. 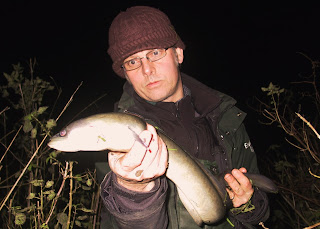 Managed to get a half-decent selfie before popping him back. Hung on a bit longer, but that was that. A few days later I was back, having endured another blank on the Soar in the meantime in absolutely horrible weather conditions. Tim was already in the snag pit, so I went and had an explore further upstream. Again, the river was up and coloured, which limited my choice of swims, but I eventually settled on a slack area behind a reed bed. Put lamprey sections on out on both rods because of the colour in the water and settled down to wait. Had the rod tops up high to avoid a back eddy, so I easily spotted a couple of small knocks on the downstream rod before anything even registered on the bobbin. Picked up the rod and wound down to feel something there - what exactly I couldn't tell. Wasn't until it was in the margin that I saw.....yep, it was another eel! Shorter, but a lot fatter than one I'd had before, and a decent 3lb 10oz. This one didn't play ball with the selfies, which came out looking like I was trying to tie a balloon animal with a cycle inner tube! Fortunately Tim was on hand this time. 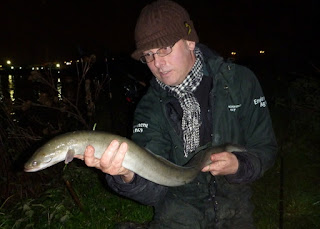 Moved swims after this into the bay upstream of Tim. Whilst there was not much in the way of a slack, it was only a slow walking pace a few rod lengths out. Initally put both rods out into open water, but after half an hour with no indications I brought both rods in closer. The left hand rod I dropped in next to a tree. It had been in literally two minutes when the bite alarm signalled some interest. Wound down into a decent fish that thrashed about on the surface in the shallow margins before being bundled into the net. Lifted the net out of the water to find a fat, well-conditioned zander that went 8lb 9oz on the scales. 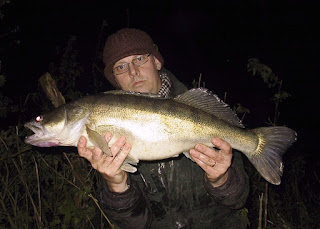 I was pretty relieved to get this one as I was heading for my sixth zander blank. So far, my "zander" campaign has yielded 10 pike, 4 zeds and now 3 eels.....the latter in November! Global warming or am I just a snig magnet??
Posted by Toodle No comments:

Back from Wales the plan was to try and fit in as many evening sessions as possible for the zander. A promising report from my friend Tim saw us meet up the very next day on the River Trent near Sawley. He'd had a couple of fish from the same swim we'd fished together at the very end of last season, so late afternoon saw us both squeezed into the "snag pit". Up at our house it was brilliant sunshine and blue skies, but down at the river it was foggy, cold and damp - more suitable for Halloween the night before! Visibility was such that we were casting blind into the murk with no far bank features to aim for. However, Tim was out of the blocks early with a zed of about 5lb before it went dark. Unfortunately that proved to be the only fish of the session, with just a couple of dropped runs and some half-hearted pulls that may well have been chub. Undaunted, we met up again in the same swim three days later. This time the fish seemed even more finicky, but it was my turn to get the only full-blooded run of the evening on my last but one bait. Unfortunately, I lost track of the fish in the dark and it got snagged up on the end of a fallen tree just out of netting range. All I could do was look at it hanging there like a bizarre Christmas bauble! I was contemplating how on earth I could free it when it flipped and managed to unhook itself. It wasn't a big fish, but to lose it through carelessness still hurt (we'll laugh about it later, Tim!).

The end of the week came and, as I was working down at Rothley again, I returned to the Soar to lick my wounds and hopefully get a fish on the bank. Obtaining more bait had been a real problem in the week. All the local shops had run out of suitably sized deadbaits and promised deliveries hadn't materialised. All I had was a packet of eel sections, a couple of smelt and some sandeels left over from Wales. However, on the plus side, the weather was extremely mild and overcast and, after slipping and sliding down the new access track, I got to the river to find it looking bang on and devoid of other anglers. The sandeels actually looked like a decent bait mounted up with the heads snipped off, so they went on one rod while I alternated smelt and eel sections on the other. My confidence in the sandeel seemed to pay off when the rod with it on started nodding a short while later. However, despite the line fizzing off between my fingers, when I wound down there was no re-assuring weight of a fish on the other end and the hook came back empty. Unbelievably, the rod tops remained stubbornly still after this. It was not until well into dark and just as I was contemplating packing up when the sandeel rod eventually went off again. Thinking this was definitely my last chance, I went through the routine of knocking off the bail arm, feeling the line being pulled out between finger and thumb, before winding down to........nothing. It was a beaten and dejected angler that made his way home that night!

Didn't think I'd be able to fit a session in this week but, when an opportunity arose, I made the mad dash to the Trent at Sawley after work, getting there just before sunset. There was a stiff wind blowing into the snag pit, so I moved 'round to the next swim - bit more sheltered and no snags!  I'd managed to get some deadbaits since last session, so it was a small, whole roach on one rod and a lamprey section on the other. The rods had been in literally minutes when I had a very positive take on the roach rod. Hit a heavy fish and, from the head-banging, knew it was a good zander. When I got it the net I was thinking (hoping?) scraper double, but didn't have time to reflect because the other rod roared off as well! Hit another, heavier fish which made several powerful runs before rolling into the net. Not another zander unfortunately, but a mint, mid-double pike. Left them both in the water while I got the scales and the camera ready as quickly as possible. Weighed the zander first. Not quite a double, but at 9lb 11oz it was a new personal best. 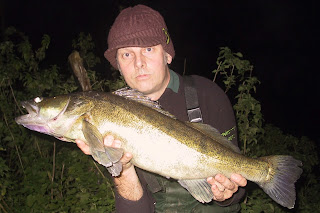 Popped him back and turned my attention to the pike. This turned out to be 14lb 8oz, my biggest this year. 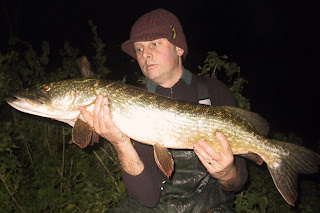 Quick snap and he was back safely as well. I'd literally been on the bank about 20 minutes by this stage, so took a few moments to settle down again and sort out the mess. Thing is, I could have left there and then because I didn't have another sniff! Fishing can be a very funny game......
Posted by Toodle No comments: