Was getting stir crazy from the lack of fishing this month so, with the weather forecast indicating a dry period with an upturn in temperature, I booked the morning off work, dusted off the pike rods and headed for the River Soar near Kegworth. Had done a recce there earlier in the year, so intially headed for a big overhanging tree at the top of the section. Had two float-legered deadbaits out shortly after first light, one up against the tree and the other in the margin in 6 feet of water. 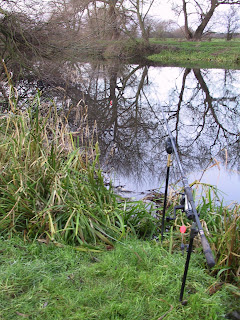 Spot on!
Settled down in the early morning sun and was soon mesmerised by the float tops gently wafting in the current, so much so I nearly nodded off a couple of times! Had just got up for a walk about to wake myself up a bit when the float next to the tree fell flat and then started moving off. Wound down to meet only token resistance and soon had a small jack on the bank. 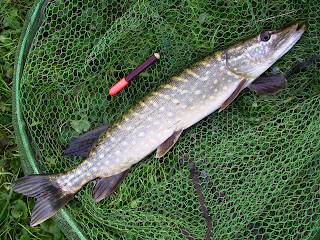 Where's Grandma?
﻿
Put another bait out for half an hour or so but didn't get any further interest, so worked my way back to the car dropping the baits into any likely looking spots. Unfortunately, I failed to trouble the scorer again. If I'd had the whole day to myself I probably would have upped sticks and headed somewhere else. However, come lunchtime I was back home and then reluctantly off to work.
Posted by Toodle No comments:

Well, I suppose it had to end sometime - couldn't keep having double figure temperatures in November forever, could we? Did some retail therapy to cheer myself up. First of my early brithday/Christmas presents to myself hit the doormat with a thump last week - the new book from the Perchfishers, "Biggest Fish of All". 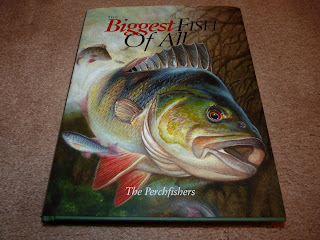 Weighty!
After a quick leaf through it looks to be another well-produced book that's sure to become a classic reference like the first one (see http://theperchfishers.org.uk/). I remember getting my copy of the first Perchfishers book from the cheap bookshop on Ashby de la Zouch high street. They had quite a few copies at the time and I wish I'd bought them all given the price they go for now! Had a quick squint at the big perch list at the back of the new book and had a suprise - a 5lb 1oz perch from the River Soar caught in July this year! Must have missed that in the press, but certainly something to aim for!
Posted by Toodle 1 comment: