Not been blogging for a while 'cus.........I've not been fishing for a while! The gloom caused by the uncertainty at work was forgotten temporarily with a much needed holiday to France with friends. Enjoyed plenty of wine, good food, excellent company and logged a couple of hundred more miles on the road bike. Didn't think it was worth taking any fishing gear this time as most things seem to end up in a French cooking pot down there, but did spot a shoal of barbel at a bathing area on the River Charente that would make me re-consider in future. Unfortunately all good things come to an end, but I only had to endure a week at work before we were off again - this time down to Pembrokeshire to see the in-laws. As usual I'd thrown in a few bits and bobs to cover a number of eventualities. However, my opportunities were to be limited by the tide and the weather. It chucked it down with rain and blew a gale most days. The brief interludes of better weather were spent on the beach with the kids and their cousins or on the bike. However, still managed to find a couple of reasonable windows for fishing, albeit with mixed results. First trip down to the estuary for the bass, lure fishing on an incoming tide, was a complete blank. Second trip (having had to scour the county for some fresh ragworm!) was at high tide to another mark in the estuary where I thought there might be the chance of a wrasse. 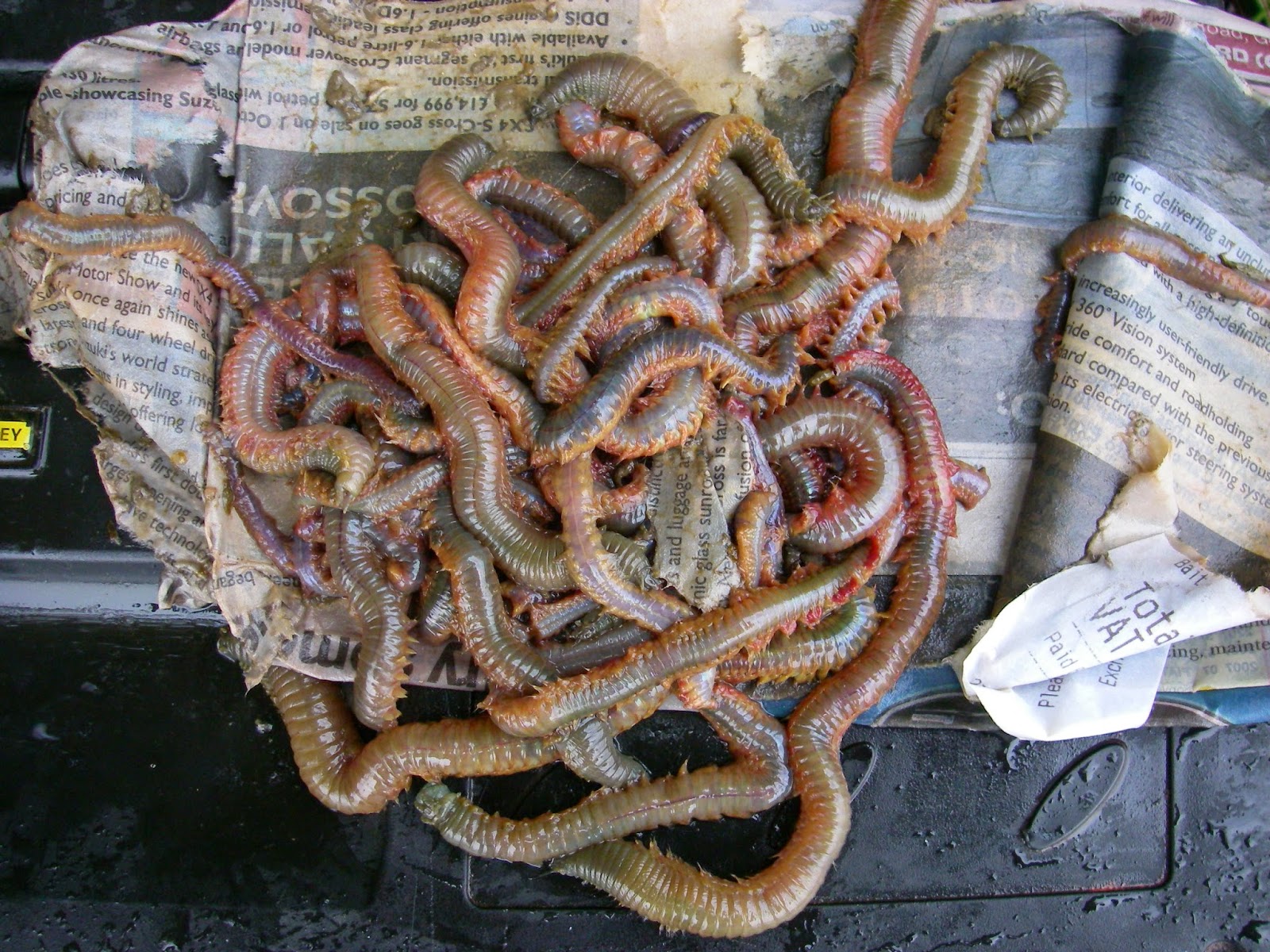 Unfortunately, apart from a few knocks and rattles, that also turned out to be a blank and I was forced home when the tide turned and the estuary coloured up. Not to be outdone I headed out for the final time to a mark near Pembroke Dock - Hobb's Point. Dropped a simple two-hook rig down the side of the ramp that used to serve the car ferry to see what would turn up. 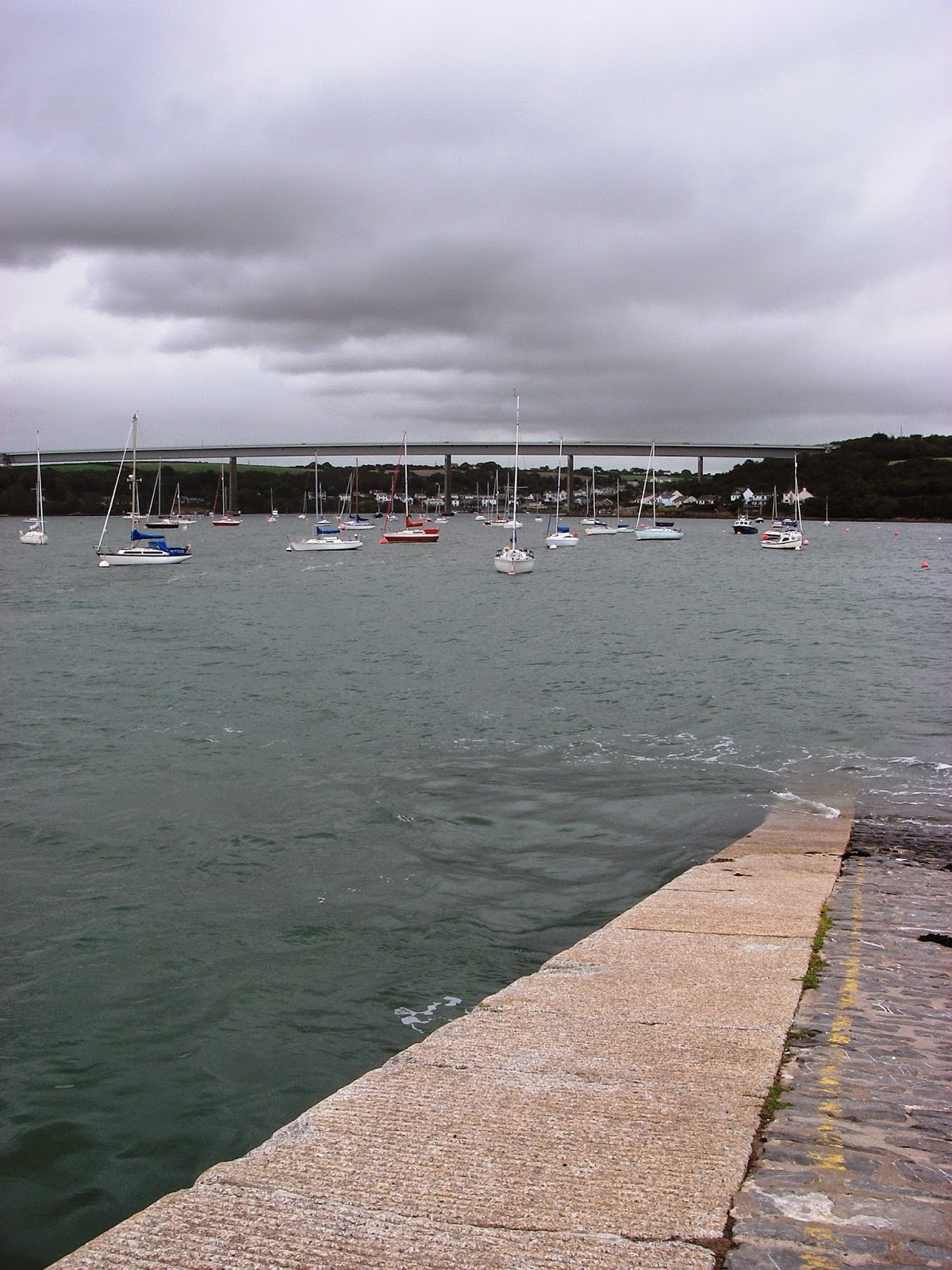 Wasn't long before I was getting knocks and rattles. Initially found that I was striking into thin air in my eagerness, but soon learned to wait for the tip to go well over and then just lift into the fish. Was a bit surprised when the first fish to pop up on the surface was a schoolie bass. The next fish was what I was really after - my first Welsh wrasse - and a right little fatty at that (assumed it was a Ballan, but correct me if wrong!). 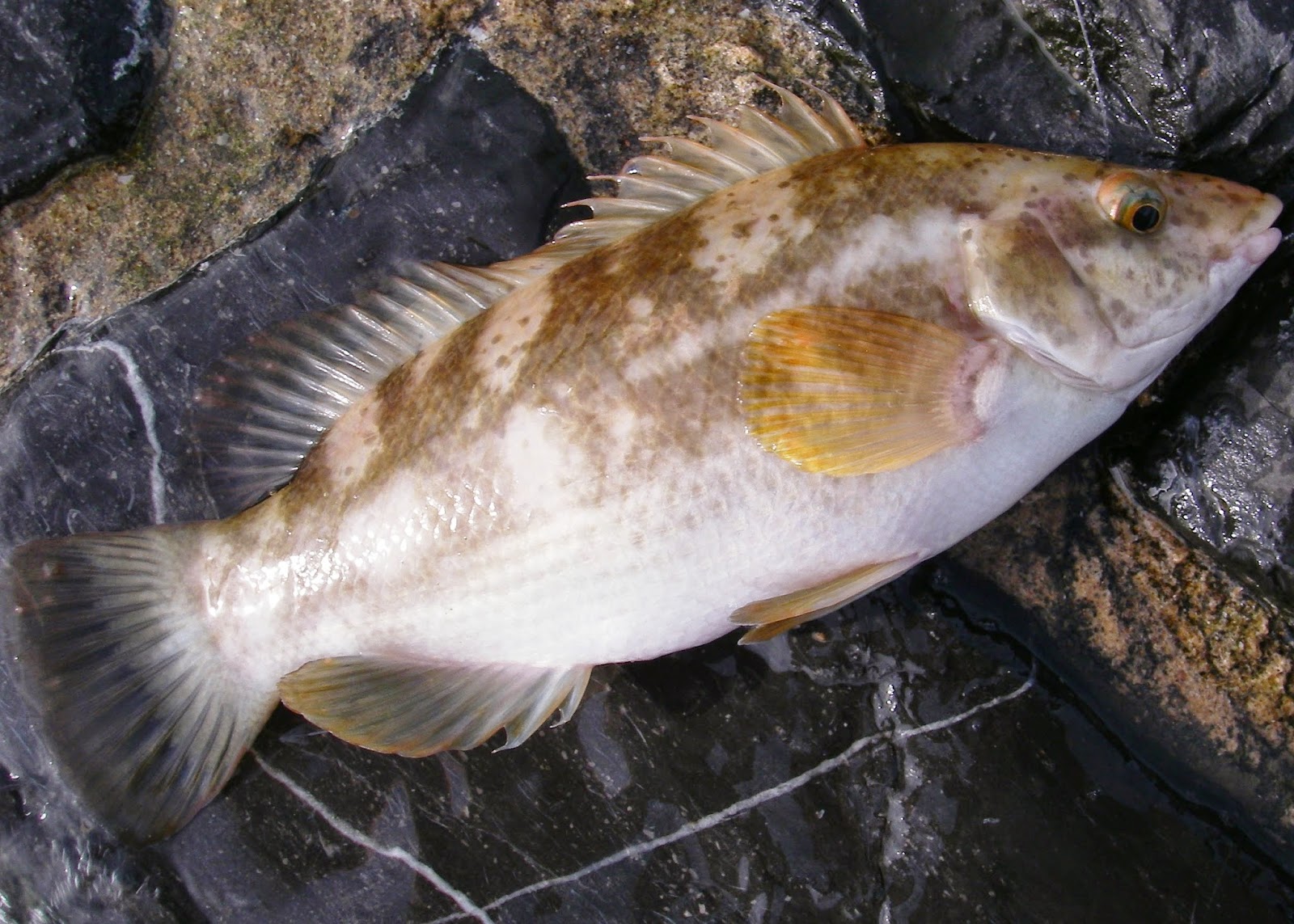 Next drop down I had an instant smash hit and briefly bent into a much bigger fish that immediately made for the base of the wall before everything went slack. Found that the hooklink had been neatly severed just above the beads, presumably as a better wrasse had made it back into its snaggy bolthole before I could turn it. Carried on dropping down to the same spot and had couple more wrasse, both of similar size and colour to the first. 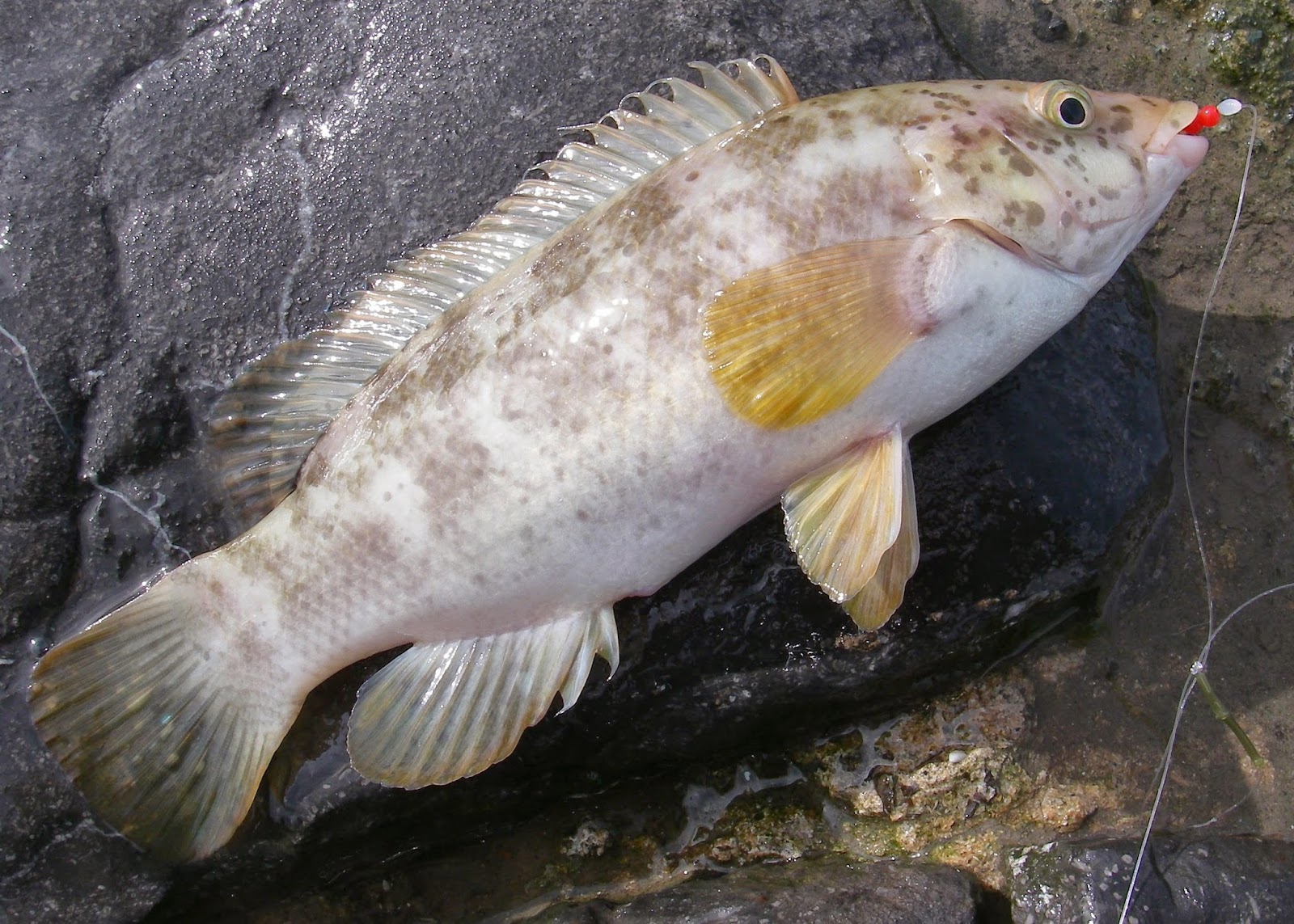 Peas in a pod

Unfortunately the last one decided to croak it for no apparent reason, turning belly up when I popped him back in. Luckily I knew somebody who would be very grateful for a fish dinner so, rather than it him drift off for the seagulls, I risked the waves and two wet feet to retrieve it and popped it in the bag for later. By now the tide had started ebbing and pulling strongly along the wall and I was struggling to hold bottom with my light gear, so I was surprised that my last fish was a little rock goby (again, please correct me if I'm wrong with the ID) that had managed to stuff a two inch section of ragworm into its mouth. 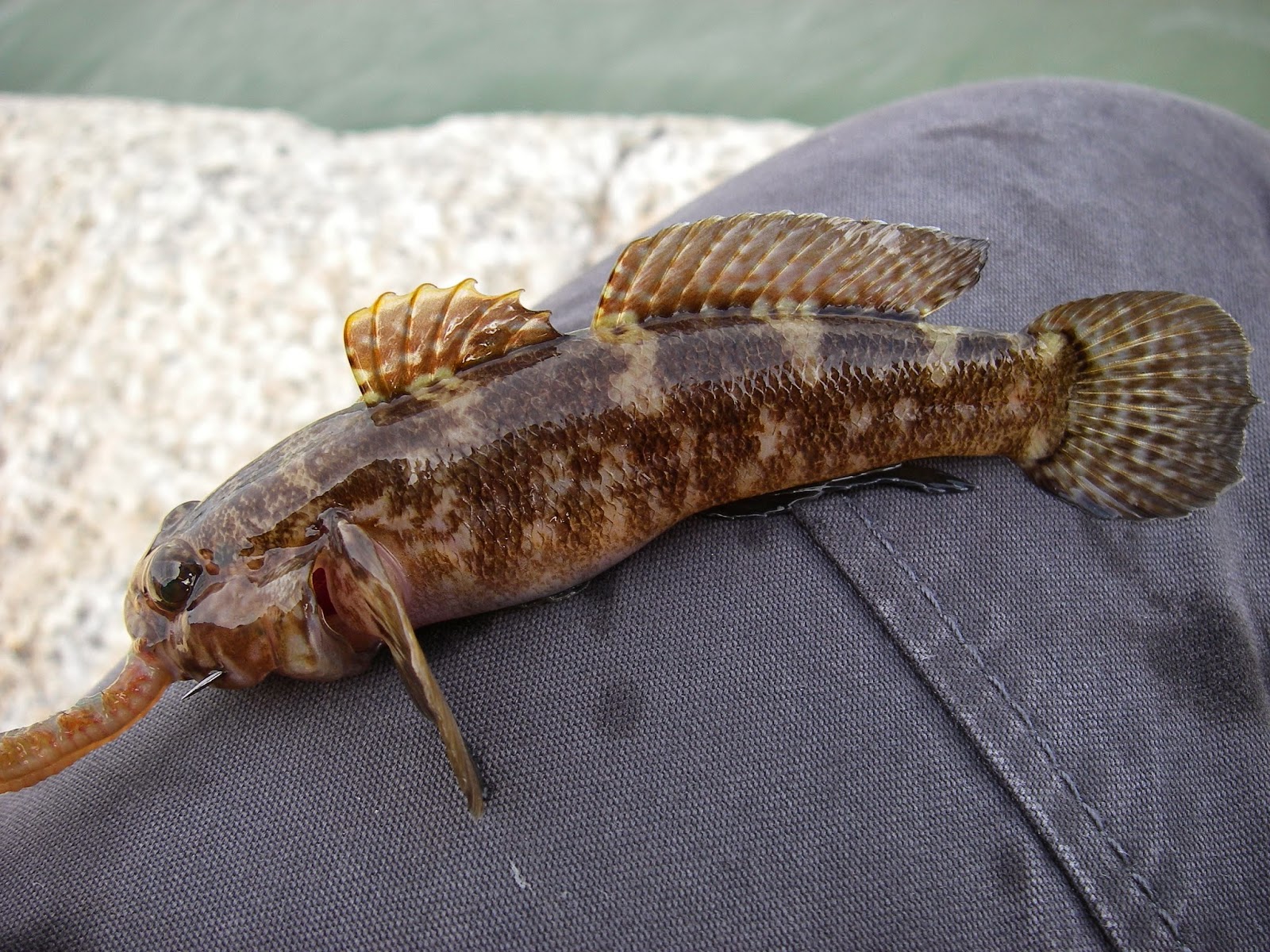 Tried the other side of the ramp for a bit, but the water was much shallower and with no more rattles or knocks I headed back homewards. I had got my new Aleka 10 ft #4 fly rod (Aleka Sports) in the boot as I had been hoping to have a go at catching some of the numerous mullet in the estuary. That idea had been knocked on the head as the incessant wind had turned the creeks and inlets into a nice choppy, brown soup that made fish spotting impossible. However, the thought of christening it on a few brownies instead saw me take the turn off to Llawhadden and the River Cleddau. Found the river to be at a reasonable level and still clear despite all of the rain, so quickly set up a three fly cast, pulled on the chesties and dropped in the river at the head of the stretch. Lost a good fish in the faster water under the trees just as a couple in a van pulled up to watch - Sod's Law! Was happy with the rod  though - coupled with a Barrio "Smallstream" fly line (Barrio fly lines) it easily punched a long wet fly cast with a goldhead nymph on the end across the river in the blustery conditions. Carried on working my way downstream, but it wasn't until I reached the deeper water down by the bridge that I had any further interest - four brownies in quick succession, all on the point fly. 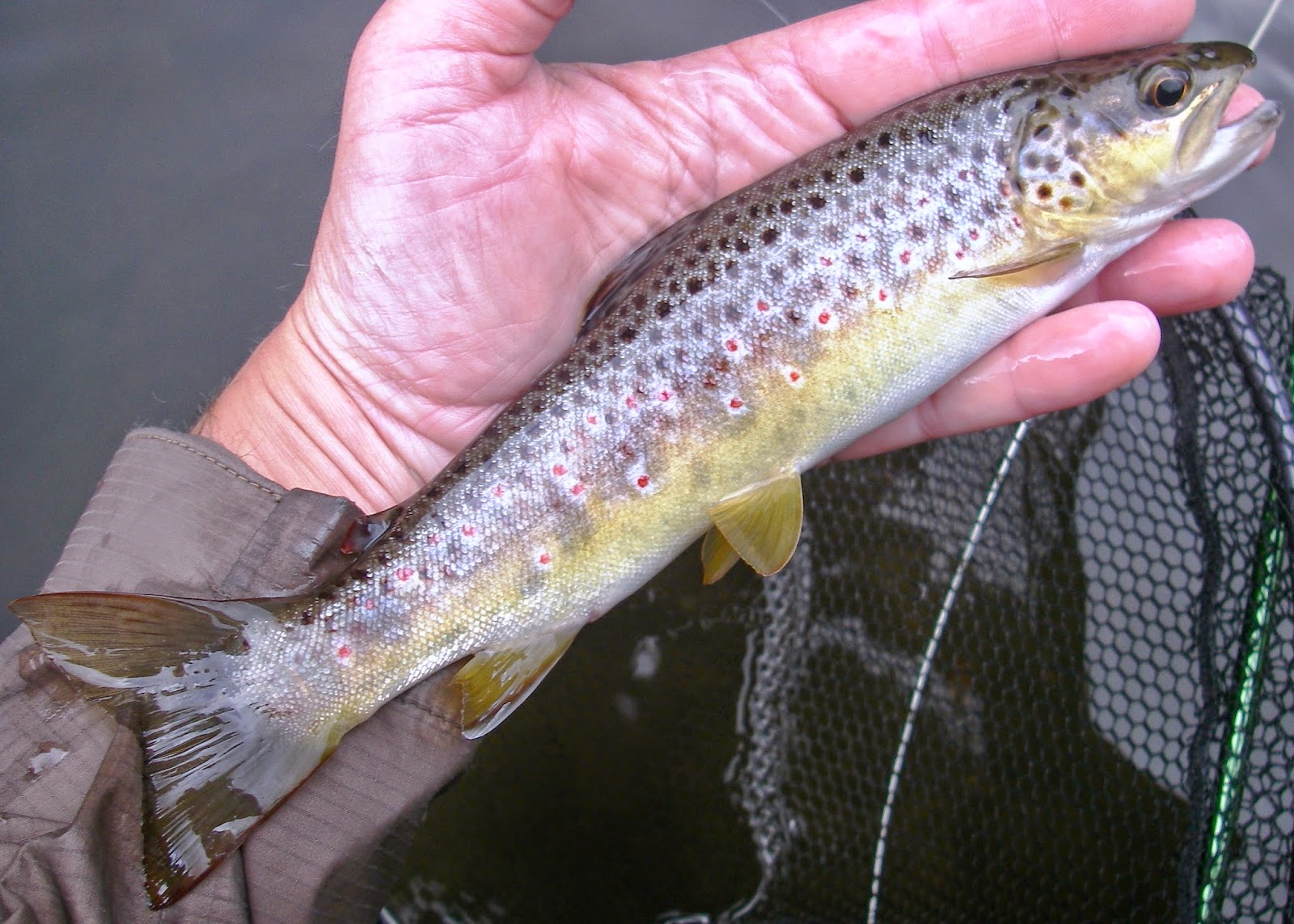 Already had a kingfisher and a dipper working the river with me when I happened to glance to my left and spot a trail of bubbles heading for a ledge at the base of the wall below the road. A few seconds later a mink popped out, had a shake, gave me a long stare and then disappeared in a trail of bubbles back from where he came. Had got down to the bridge by now and the end of the "free" section, so called it a day and waded back up to the car. Back at home Angus, the juvenile white tailed sea eagle (Pembrokeshire Falconry), was the grateful recipient of my expired wrasse. 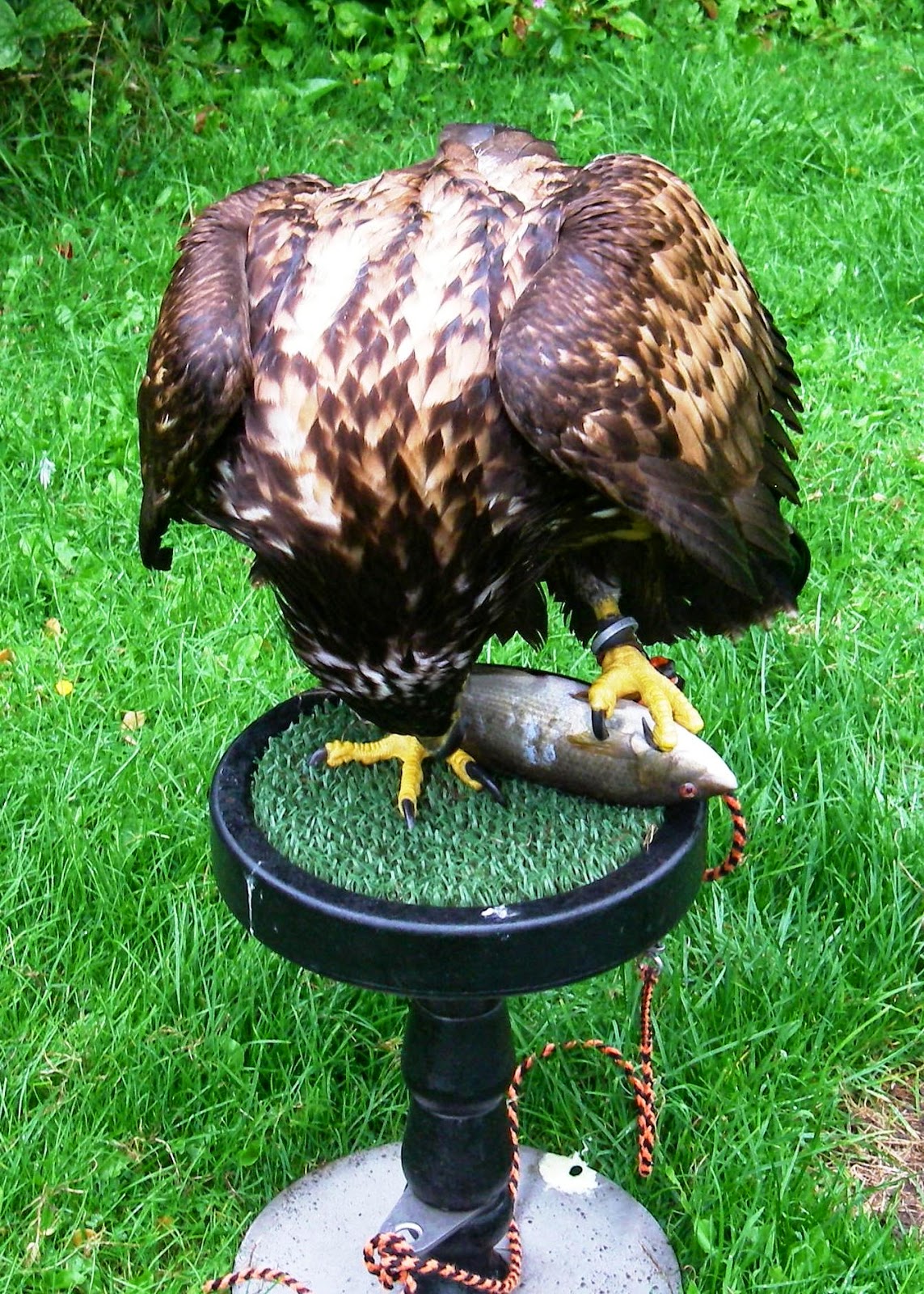 
I was surprised that, for such a big bird, he is quite a delicate eater - picking off morsels with his massive beak rather then necking it in one as I thought he would do. However, soon all that was left was a few scales. Chickens didn't miss out either - they had the leftover rag! 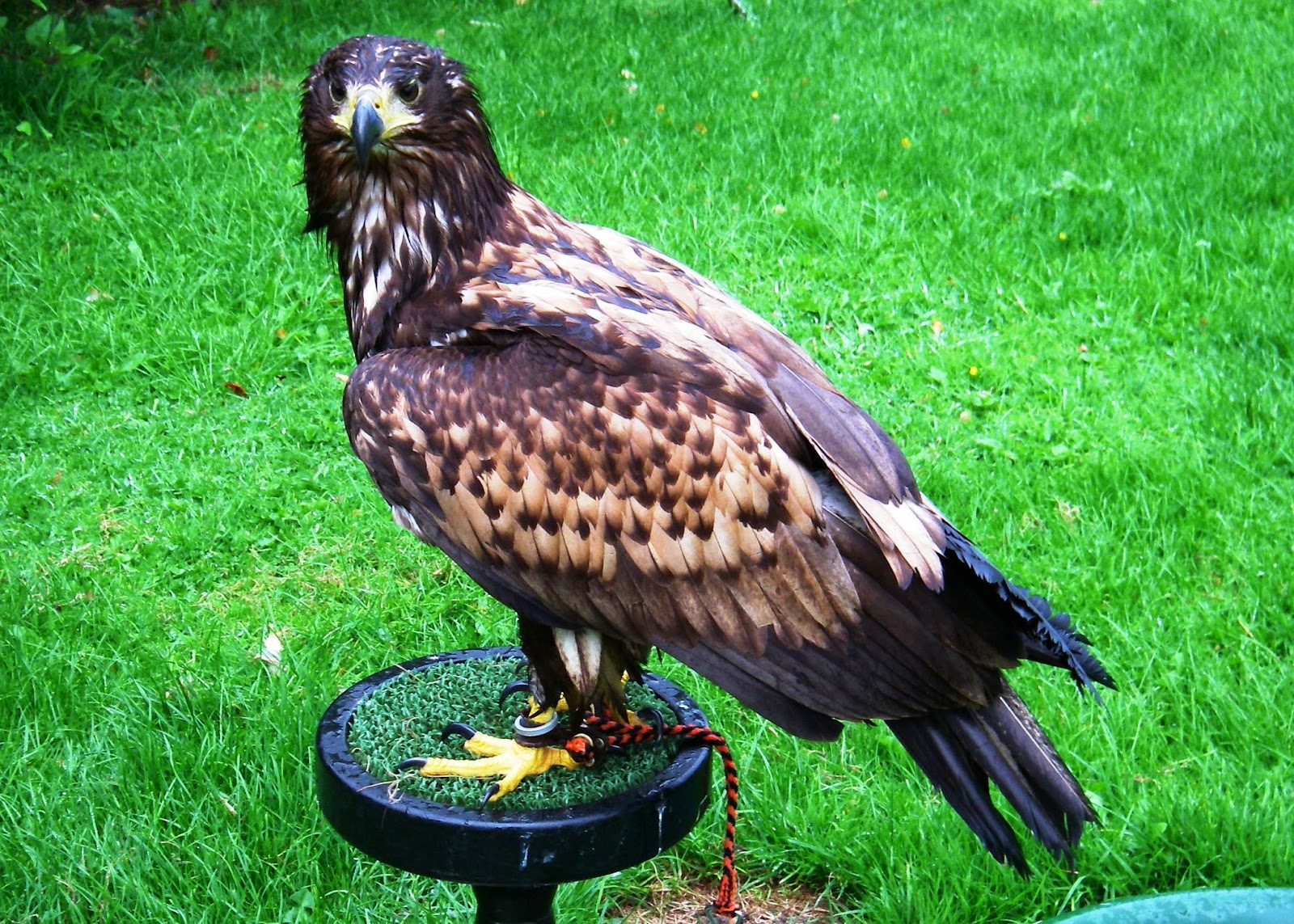 Hopefully I'll be a bit more regular with the blog come September - with the nights drawing in it'll be time for the perch and zander.
﻿
﻿
Posted by Toodle No comments: