Hadn't made any firm plans for the last couple of days of the season as it was really a question of what the fickle weather might decide to throw at us. The main rivers such as the Trent and the Derwent were not going to be in a fit state for my purposes anyway, so again it would be a question of looking further afield. When Friday came around it looked as if a nice weather window was opening up in the afternoon - sunny spells and light winds - so I decided to take the opportunity to visit a venue on one of my club tickets that I'd not been to before, the Markeaton Brook near Derby. 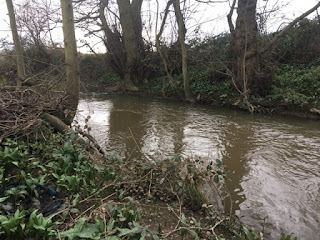 Chub were going to be the target but not knowing exactly what water conditions I would be faced with I took a variety of baits, including maggots, bread and cheese paste made with the Christmas leftovers. Arriving at the venue I poked my head over the bridge to find the brook still carrying quite a bit of colour, but running at a nice level. Made my way upstream in bright sunshine to the weir pool at the top of the section, making a note of any likely spots and disturbing a pair of Mandarin duck in the process.

Started off with a lump of cheespaste on a simple link-leger and soon had a couple of rattles on the tip of my new 5.5 ft Advanta River Rover. 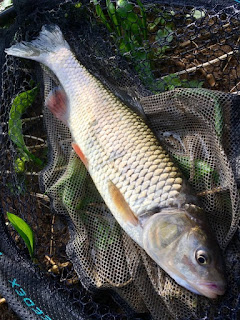 Unfortunately, the colour in the water meant that I was fishing blind and when I lifted the rod I found the rig had stuck in an immoveable snag and had to pull for a break. After losing two more rigs in a similar fashion (doh!) I realised it probably wasn't worth persevering in what appeared to be a right snag pit, so moved downstream to a short glide with some cover on the far bank. Dropping a lump of cheesepaste at the base of a tree I had to wait all of two minutes before the tip bent round and, after a short tussle, had my first fish in the net. Let things settle a bit, then ran the float through the swim a few times. The minnows were straight onto the maggots and I'd had a handful of the greedy buggers (how do they get double maggot on a size 16 down their gob??) before hooking something a bit more reasonable. Turned out to be a very sorry looking chublet that, judging by his missing scales, must have had a recent run-in with an avian predator.

Carried on downstream picking up another stocky chub from a near-side slack, before dropping into a promising little pool. Again, the lump of cheespaste had only been in the water a few minutes when the tip went round and another chub was in the net. Was just baiting up to cast in again when all hell broke loose! A male goosander suddenly surfaced about 6 feet away, saw me and then panicked, thrashing the water in its attempt to get away. After all of that commotion I realised that it probably wasn't worth carrying on in that swim, so moved downstream again. 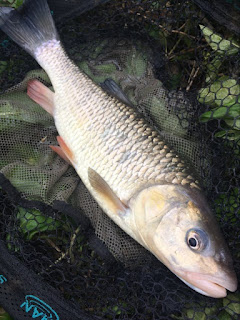 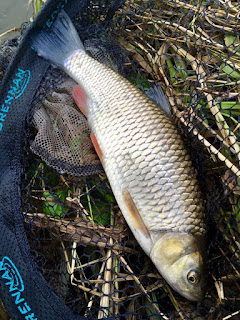 Didn't see my feathered friend again, but the lack of of any further bites made me suspect that he'd probably been working his way upstream through all of the spots that I subsequently dropped a bait into. The weather conditions had deteriorated by this stage and I was suddenly caught in heavy shower. As I was only wearing my light down jacket I was soon soaked, so took that as a good enough reason as any to end the session!

I doubt if I will be venturing out for the last day, so that for me is likely to be the end of a very weather-disrupted winter campaign on the rivers. Oh well, on to the next. I've not bothered those canal zeds for a while.........
Posted by Toodle No comments:

I've caught a few pike this season whilst fishing for other species, but not yet had a dedicated session for them. With time running out I thought I'd better put that right, so I dusted down the pike gear and purchased a couple of packs of extortionately priced deadbaits from the tackle shop. 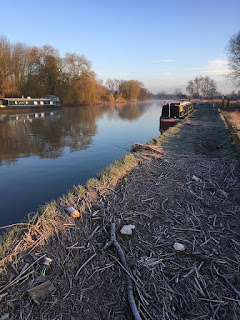 Looking at the river information on .GOV.UK my local River Soar looked to be the best bet. The level was spot on, the only issue being whether the water clarity had improved sufficiently. Arriving at the venue at first light, a quick glance in the margins confirmed that there was good visibilty with just a tinge of colour - perfect! Walked upstream to my starting point through swathes of flood debris littering the towpath. An overnight frost also meant that it was nice and firm underfoot, but looking at the clear sky I suspected it wouldn't last long and that everything would turn into a quagmire once the sun came up! Soon had the traps set with a float-legered joey and a lamprey section soaking in the near-side margin and settled down to wait. Within 15 minutes the downstream float registered some interest down below. As it started to waddle off I wound down into what felt like a nice fish that put up some token resistance, then came into the bank like a sack of spuds.

Was just drawing it up out of the depths to the net when it decided to wake up. Saw a nice big tail pattern on the surface as it crash-dived back to the bottom and then spat the still-frozen mackerel! 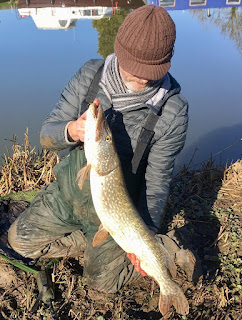 Was obviously disappointed, but I took that to be a good sign that there were fish about and that they were in the mood. However, as the sun climbed higher, the floats remained stubbornly motionless. By mid-morning I'd had to shed my coat as it felt more like a summer's day and I was beginning to regret that lost fish even more. I'd leap-frogged the rods downstream a couple of times to no avail and was ready to do so again when a chap came walking up the towpath and stopped to have a chat. After about 15 minutes I was wondering when he was going to bugger off and leave me alone when the downstream float bobbed a couple of times and the disappeared. This one put up a bit more of a fight and, after a hairy moment when a flying treble snagged in the landing net, I had what looked like a low double on the bank. Went 12lb dead on the scales, so another one to add to my growing list of those "rare" Soar doubles.


Whilst it had been fortuitous for my companion to turn up when he did, I had to be home at lunchtime, so as soon as he left I got back to the business of leap-frogging the rods downstream. By the time I'd got to the end of the section I'd had another five fish, but nothing matching that first one. 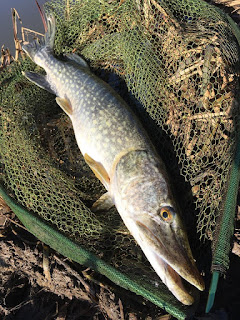 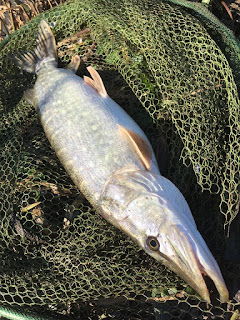 However, given the slow start, I was pretty happy with the session and I made my way back to the car, slipping and sliding along the now-defrosted and very muddy towpath. Next stop Wales for the brother-in-law's 40th, then we'll see what the last week of the season will bring - it's all up in the air at the moment!
Posted by Toodle No comments:

It's that time again. A sense of deja vu. The end of the river season fast approaching and still so many targets yet to be achieved and venues yet to be visited. Suspect I'll still be playing catch up this time next year, particularly if the end of season "washout" becomes a permanent fixture. 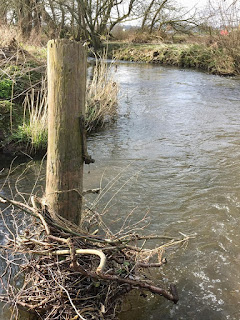 Thankfully the weather seems to have sorted itself out for the time being - welcome respite for some parts of the country and a window of opportunity for anglers everywhere. However, with local rivers like the Trent and the Derwent still having some way to go before they are back to "normal" winter levels, it's still a case of looking further afield and higher up the catchments to find some fishable water. For that reason, I headed west on the A50 into Staffordshire once more in search of a decent grayling. Whilst I has spent most of the week closely montoring the water levels on .GOV.UK there was still a sense of trepidation before I got my first sight of the river. I needn't have worried as it was running at a good level and had a nice tinge of colour to it - not tapwater as on my previous visit! Looking back at the obvious line of muddy footprints leading across the field form my car I was also confident that nobody else had been recently.

It was looking even better when, in the first swim, I had a grayling on only my second run down with the float. However, after my last two sessions on the river, I'd learned not to count my chickens and so it proved. Once again it was a case of catching the odd fish here and there, with somes spots appearing to be completely barren. What has also been noticeable this year has been the lack of small grayling. Whether these have been moved on by the floods or have been victims of predation (I've seen evidence of both the furry and feathered kind) is debatable. However, having seen the "remodelling" done by the power of water alone - whole bushes and trees ripped out and carted off downstream since my last visit - I wouldn't want to be a little fish living in a spate river while it's in flood! 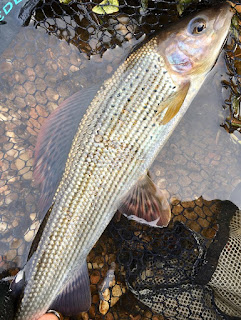 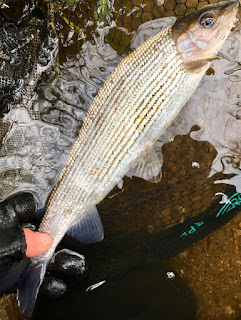 By mid-afternoon I'd reached the bottom of the section and had 12 grayling and a single chub that had caused me some fun and games in some tree roots. Four of the grayling were over the pound mark - 1lb 2oz, 1lb 4oz and two at 1lb 6oz. Judging by the number of maggots down the necks of those that I'd caught they must have been feeding well. There just wasn't the numbers there. 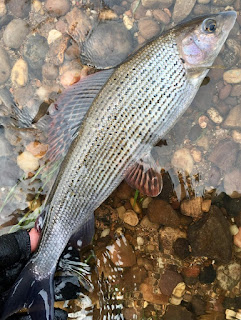 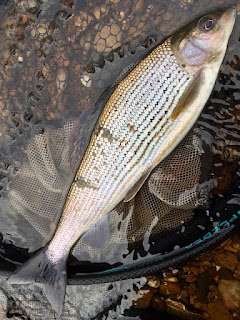 Headed home on the A50 with mixed emotions. I might have one more chance at the grayling a bit closer to home before the season's end - it's a while since I had a 2lber - but my next session will for something completely different.
Posted by Toodle 1 comment: