It was an early finish for Christmas at work and, with the temperature still double figures, I therefore decided to have a quick zander session, this time on the River Soar. Dropped into the tackle shop first to supplement my meagre and increasingly manky supply of dead baits. However, they'd forgotten to order in any small coarse fish, so I had to make do with some extortionately priced lamprey and a pack of two, hand-sized roach that I could at least fillet or section if I was desperate. On the way to the counter I passed the bait additives and spotted a bottle of Predator Plus, no longer under the Van den Eynde label, but presumably the same stuff. Whilst I've never used additives for predator fishing before I was willing to try anything to find the edge that I was obviously lacking, so a bottle was purchased along with the dead baits. 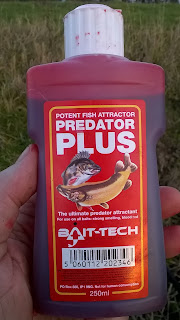 Arrived at the river later to find it had a nice tinge of colour. However, whilst the previous day had been overcast and dull, I had brilliant blue sky and a low, dazzling sun to contend with instead - not ideal! Got the rods set up, one baited with a lamprey section, one with a small roach. Gave both dead baits a liberal coating of the Predator Plus. Lack of any ingredients on the label and no real discernible odour didn't really give me any clue as to how effective it might be. Popped one bait down the side and one over to the far bank and settled down to wait. The margin rod was first to go a few minutes later, resulting in a micro-jack. Re-baited and dropped it into the same spot. Unfortunately, my ineptitude came into play as I again forgot to open the bail arm on the reel after attaching the drop off. When the next run came on this rod a few minutes later  I picked it up to find a much better fish already attached. However, just as I was reaching for the net the hooks pulled out. Presumably it had not been able to get the bait far enough into its mouth on the tight line and had just been nicked by the bottom treble. 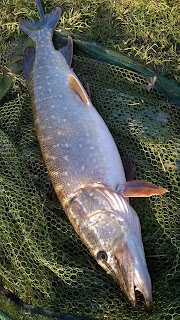 "Oh dear", I said aloud, or something like that! Moved both rods down the slack after this and had just got settled down again when a chap appeared over the top of the bank. Apart from the fact that he went and stood between me and my rods, it soon became apparent that he viewed chancing upon a fellow angler as an opportunity to verbally unload! The mostly one-sided conversation dodged about from the state of the fish stocks and Eastern European anglers to lack of Environment Agency bailiffs and otter predation to the price of club tickets. When he eventually left I got up to move the rods again. However, the downstream rod started nodding away and I was onto it before the drop off hit the rod rest. Again, this felt a much better fish. Looking over my shoulder I could still see my "friend" about 50 yards away making his way across the field. Thankfully he didn't turn around and see my rod hooped over and come back! Hooks stayed in this one and I was pleased to see a nice fat pike slide into the net - a rare Soar double of 10lb 13oz in mint condition.


The sun had just started to dip below the horizon at this stage and the harsh winter light was visibly softening. Re-baited again giving the lamprey section another good squirt of liquid attractant and dropped it in the same place. Less than 5 minutes later the same rod was off again, resulting in a smaller, but equally mint pike. 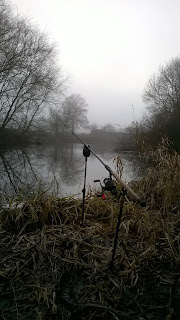 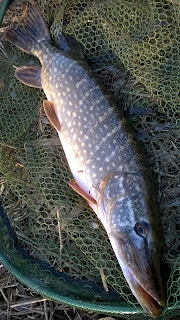 Moved further down the slack again into the swim that was going to take me into darkness, popping one bait down the middle and the other alongside a line of willows on the near side. As the sun disappeared the temperature started to noticeably drop and I had just settled down when I got a text from the wife saying that a thick fog had descended in Beeston. Looked up in that direction to see a grey band approaching over the horizon and it wasn't long before I was similarly enveloped.


Soon everything, including me, was covered in a fine drizzle that just made it feel even colder. As it got darker I had a tentative pick up on the rod in the middle of the channel, but wound down to find nothing on the end. With no further action in the next half an hour I didn't need too much convincing that it was probably best to pack up and head home. The quest for the first zander of the season continues........
Posted by Toodle 1 comment:

The last couple of years I've treated myself to a fishing trip for my birthday and had provisionally booked a day this year to do the same. However, with the weather set to change yet again I brought it forward to mid-week. Whilst the forecast was windy, it was dry and mild, back up to double figures in fact. 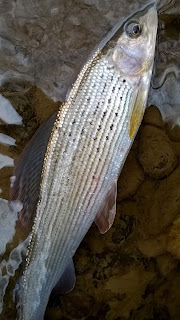 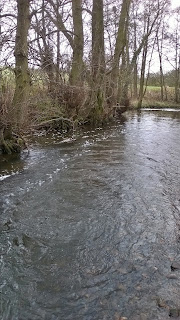 Having dropped my daughter off at the railway station for her early morning train, I headed for Staffordshire. Grayling were the target again and my venue the small Dove tributary that I'd had so much success on in the past. .
Got to the venue shortly after 0800 hrs and was fishing half an hour later. Tackle was simple - my 11' Drennan Ultralite float rod, Speedia centrepin loaded with 3lb line, a wire-stemmed stickfloat and a size 16 Drennan widegape at the business end, baited with two maggots. 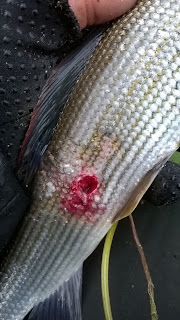 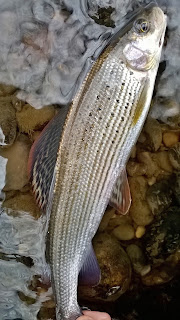 Second trot down the first shallow run the float buried and I felt the mad thumping, twisting and gyrating of a grayling on the end of the line, not a biggie, but always good to get that first fish of the day. After that it was non-stop. There seemed to be fish in every riffle, run, glide, pool, nook and cranny! Most were clean, young fish in the 25-30 cm bracket, with just a handful displaying signs of attention from predatory birds - one with a stab wound and few more with classic "grab" marks on the flanks. 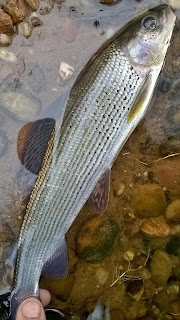 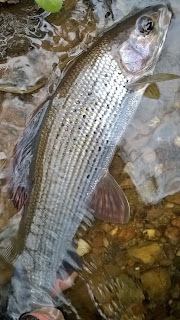 Made my way slowly downstream, working the float, holding back then running through, and constantly changing depth to search each new spot. By the time I stopped for lunch I had landed over 60 fish, but had only got a fraction of the way down the section. Was just finishing off my coffee when I got a text from my lad with the results of his driving test. Not one to waste any words, it just read "I passed"! Couldn't help having a chuckle to myself before carrying on downstream. 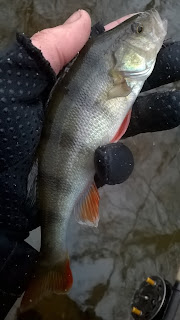 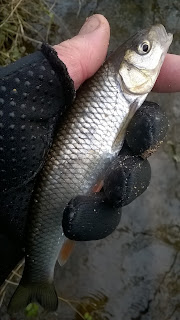 Skipped a few swims in order to give myself time to fish a pool where I'd had some nice dace and a few chub in the past. However, got there to find a large tree trunk wedged at the head of the run. The majority of the pool was still fishable, but the the tree had deflected the flow and changed the swim's characteristics. The first few trots down resulted in more grayling, including what would probably would have been my biggest - one of only a few that had come off during the course of the day.


It was only as the light was beginning to fade and as I was trotting down the crease next to a a bit of a slack next to the bank that I eventually had something different in the shape of a couple of small chub and the same number of perch. Had one last grayling before snapping my hook off in the landing net taking my total to 83, by far the best session I've had at the venue. The light wasn't far off going completely at this stage, so I made my way back to the car, a bit tired but looking forward to celebrating with the lad (#mumanddadsnewtaxi!).
Posted by Toodle No comments:

Had two more sessions out on the Trent after the zander. On both occasions the conditions seemed ideal - overcast and ridiculously mild - and, whilst the river was still relatively low and clear, I was confident of a bite after dark. In reality, my confidence was significantly  mis-placed! 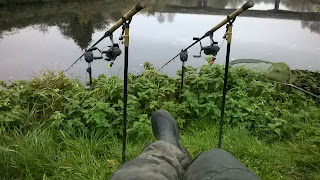 On the first evening I moved upstream to fish some deeper water at the junction of the river and the navigable channel bypassing a weir. The feature screamed fish. However, I spent several hours contemplating my feet and my un-moving bite indicators as two deadbaits lay soaking on the bottom, with not even a "phantom" run to pique the interest. 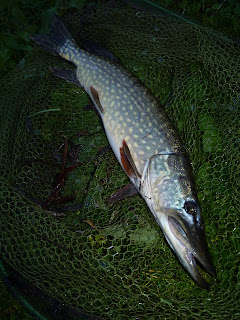 The second evening was spent tucked out of the way of a howling south-westerly, fishing a deep, near-side slack between two overhanging willows. Popped two deadbaits out and settled down to wait. However, after only about two minutes the tip of the upstream rod knocked a couple of times, then pulled violently downwards as the culprit tried to make off against the bail arm that I'd neglectfully failed to open after casting out - doh! Luckily the offending jack was well hooked and was successfully landed after a short scrap under my feet. My confidence was sky high after that instant result. However, over the next couple of hours it slowly ebbed away until finally, as I packed up after having had no further action whatsoever, it hit rock bottom! With the weather changing and the temperature dropping that was my last planned outing for a zander this year. I only hope that they are more obliging next February/March! 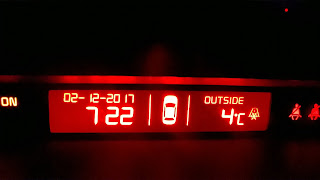 With temperatures hitting single figures, my attention now turned to grayling. At the first available opportunity,  I headed off bright and early along the A50 into Derbyshire to the River Dove to take advantage of falling river levels and a relatively calm and settled, albeit cold, day. Drove down the track to the river in darkness, having mis-judged my arrival time in my keeness to get fishing! 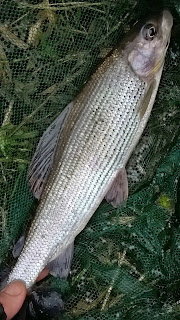 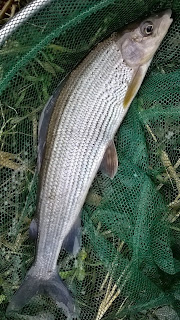 Layered up, pulled on the neoprenes and set off upstream, initially heading for a spot I'd fished with success last season - a long, wide and gradually deepening riffle. Set up the float rod and baited my size 16 Drennan wide gape with double maggot, then quietly slid knee deep into the water. Second trot off the rod tip I had my first grayling, all 5 inches of it! There were a lot of these about - obviously a good year class - and I dropped a couple more off before having my first decent fish. 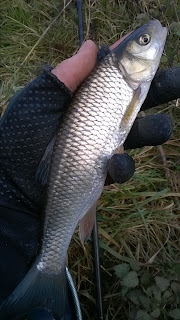 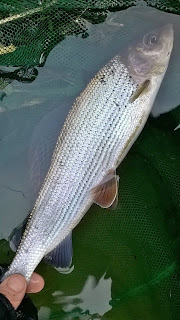 Over the next few hours I covered as much of the riffle as I could, periodically taking a few steps over to the far bank to fish a new line when the bites dried up and then moving downstream 25 yards to start the process all over again. The fish seemed to be well spread out as it was a case of catching a couple each time I moved and, apart from one solitary chub, it was all grayling. Whilst there was a lot of small fish, I did have a handful around the pound mark that gave me a some fun and games in the current.


When I finally got to the end of the run, I'd had 33 grayling and that single chub. I had bumped or lost at least another dozen, including what would have been the biggest fish of the day just as a chap stopped to talk to me on the far bank (I'm hoping it was a chub!), so was pretty pleased with my first recce of the winter. 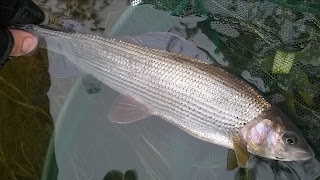 Finding out back at the car that I'd got at least three holes in my waders didn't dampen the spirits and I was already planning another trip to catch some more "ladies" on the drive home.