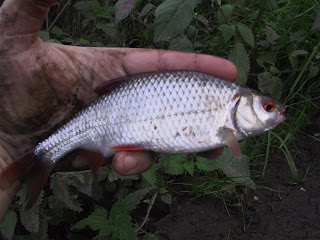 No fishing for best part of a week again due to work and social engagements. However, had made a date in the diary to meet up with my mate Tim that I wasn't going to change. Settled on the Dove at Tutbury as the venue. Was feeling really confident when we got there. River was still above normal level and nicely coloured. Settled onto a classic smooth, "walking pace" glide above a big willow and soon had two paste-wrapped boilies positioned downstream. With minimal debris coming down, things looked perfect....... 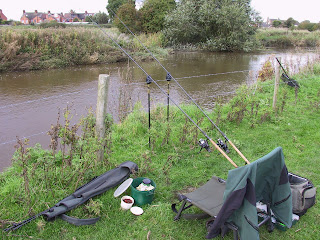 How could I go wrong?

Unfortunately, things were far from perfect as neither of us had a touch for the next four hours (unless you count the minnow came back impaled on my hook)! Perhaps we should have moved around a bit, who knows? Bit disappointing to say the least.

No fishing this weekend - surfing at Saunton!

Postscript: Tim went back the following evening for another go and, whilst he didn't catch any barbel, he had a PB chub of 6lb exactly on meat!