Left it until today for the main rivers to sort themselves out before deciding where I would be heading for another grayling session, this time with the "long rod". Settled on the River Dove near Tutbury and set off down the A50 and into the gloom. 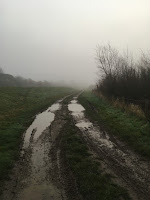 Once again I arrived far too early, so was tempted to pull into the local garage by the sign proclaiming "fresh coffee". Reality was a nasty cup of instant from a girl in her twenties who insisted on calling me "mate" and who had a perma-tan that wouldn't have been out of place on an episode of TOWIE. Weather forecast had been a tad over optimistic as well, with the reading on the dashboard stubbornly refusing to rise above two degrees Centigrade, so I was at least grateful that the coffee was hot! Got togged up and set off downstream into grey, uniform landscape thinking that I perhaps should have brought a loaf and some cheese paste and gone chub fishing instead, especially when I saw that the river was still carrying a bit of colour. 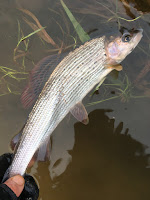 Headed to a swim where I'd done well previously - a long glide with a footpath on the far bank that attracted plenty of dog walkers thereby keeping away the black death. If I was going to catch it would be there. Lowered myself into the river, stuck two maggots on to give them a bigger target to see in the combined murk and poor light and then ran the float down for the first time off the end of the Acolyte. Took me a couple of runs down to get the depth right, but after the third adjustment the float promptly disappeared and I was into a fish! A small grayling came fighting all of the way to the net, to be followed by five more of his brethren in subsequent casts, including a nice male of about a pound. Hmmm, perhaps I made the right decision after all. 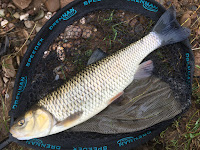 Next trot down my strike met with a bit more resistance and thoughts of an elusive two pounder immediately crossed my mind. However, after drawing the fish up carefully and slowly upstream against the flow, I raised the rod to get it up onto the top and scooped the net under a decent chub instead. Swim seemed to die off after that, so I moved 25 metres down the glide and started again, adjusting the depth once more until I was happy that my double maggot offering was just tripping bottom. 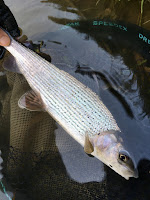 Was soon into fish again and put another half a dozen in the net before it went quiet. My right index and forefingers, having been in contact with the back of the centrepin for an hour, were completely numb by now despite my neoprene gloves, so I took the opportunity to warm my hands up under my armpits before deciding where to go next. Headed upstream into the gloom that, if anything, had got even greyer and mistier. Tried a couple of likely looking spots without any success, but my mind was really on another of my "banker" swims.  Second trot down in said spot the float disappeared and my strike met with a thump. However, the fish gave the game away by making a determined run for a bankside bush and then a dead reedbed. 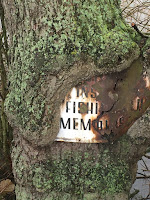 I therefore wasn't really surprised to see a black-edged tail rather than a big dorsal fin waving above the surface as I bundled another decent chub into the net. Popped him back and carried on but, try as I might, I could not buy another bite so headed off upstream again. I was into unknown territory now, having not ventured this far before. However, I reached the upstream limit disappointed after finding that  there were no more suitable swims. Walked back towards the car, briefly considering whether to drop into the swim where I had started, but decided to head home for a proper coffee instead. Gifted the last few maggots left in my bait apron to a friendly robin before heading back along the A50, the display in the dashboard still showing two degrees!
Had been a bit of a struggle and I had been grateful to drop on those fish in the first hour, otherwise it would have been a different story. Hopefully I can squeeze another session in before the New Year, so Happy Christmas until then!
Posted by Toodle No comments:

I usually treat myself to a day out fishing on my birthday, but with the rivers out of sorts last week it wasn't until today that I set out into deepest, darkest Staffordshire in search of a grayling or two. Headed off to a small tributary of the River Dove that's always treated me well in the past as the idea was just to enjoy myself, not necessarily catch monsters. Was a bit too eager to get going so it was still dark when I arrived at the venue. 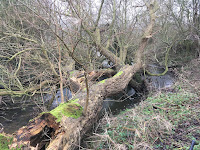 I had also misjudged the weather, expecting it to be warmer than the 5 degrees indicated on the car dashboard and was a bit light on layers. Luckily I found an extra fleece in the boot and slowly got togged up as the light improved. Set off upstream across the still water-logged fields to find the river running low, but with a nice tinge of colour. It was evident that the combination of storms and floods had already done some re-modelling, with several large trees down over the river and new banks of gravel heaped up in places. 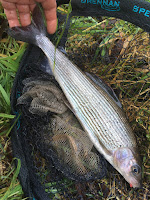 That's the beauty of a spate river - nothing stays the same and whilst previously productive swims might disappear, there will be new ones created that the fish soon take advantage of. Arrived at the upstream limit and settled into my first spot. Had got my 11 foot Drennan Ultralite coupled with a Speedia centrepin loadedwith 3lb line, end tackle being a small wire-stemmed stick carrying 4 x No 4. shot bulked up above a small swivel to which the hooklink was attached. Have yet to find the perfect hook, but a Drennan widegape comes close in my book and a size 16 with a No. 8 shot above it completed the set-up. Trickled a few maggots into the swim before swinging my float carrying a single offering out into the flow. 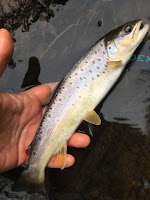 Second cast it span into a little side eddy and the orange tip disappeared resulting in my first, albeit tiny, grayling of the day. Soon got itchy feet and after a few more casts I moved a short way downstream to try a "new" swim I'd spotted on the way up where the far bank had collapsed creating a lovely crease with a small area of slack water on the inside. Waded across further downstream then crept back up to the top of the bank. Dropped the float into the flow and let it swing naturally into the slack where it promptly disappeared. Unfortunately I bumped that one, but it was sign that fish were there and I subsequently had half a dozen over the next few casts, including a nice male of 1lb 4oz. 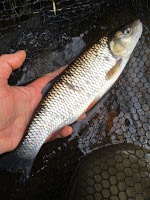 Carried on in that vein, catching at least one grayling everywhere I tried, but occasionally finding a spot where half a dozen or so were holed up. Also had a couple of out-of-season brownies that went like the clappers and had me thinking I'd caught a monster grayling until their airborne acrobatics gave them away. By lunchtime I'd arrived at one of my favourite swims, thankfully unaffected by the floods. Whereas in most of the previous spots I'd been fishing literally off the rod tip, this swim had a nice even glide of about 25 metres that I could properly run a bait through. Trickled in a few maggots while I had some lunch and a drink, then sent the float down for the first time. 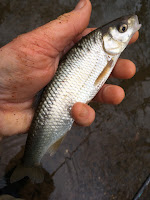 Had a nice grayling of over a pound straight away and another one a few casts later. Next trot through the float almost got to the end of the run before it disappeared. This was definitely not a grayling as it did its best to reach the tree roots on the far bank. Wasn't surprised when a small chub hit the net as I'd had them out of the swim before and over the next few casts I added three more and a solitary dace to the tally. Carried on downstream to the end of the section before heading to the car. There was another vehicle parked up by now and I could see another member in the distance further downstream. Not wanting to disturb him or go over ground he'd already covered I deceide to pack up.

Also, although it was only mid-afternoon it was already getting very gloomy, the sun that had been forecast never actually appearing all day. I'd had a total of 25 grayling, 4 chub, 2 brownies and a dace, so was pleased with my efforts. Hopefully, as the settled weather continues over the weekend, I'll have a chance to get out on the main rivers with the long rod.
Posted by Toodle 3 comments: