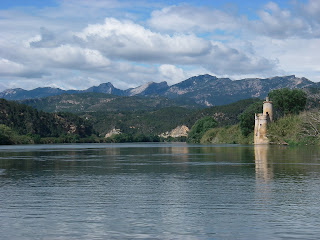 In May 2009, before I started writing this blog, I was invited by my friend Tim to join him on a trip to the River Ebro for his 40th birthday. Joining us would be four of his mates from back home in Lancashire that I had got to know through our regular pike fishing trips out to the Lincolnshire fens. We had six days fishing in pairs for catfish and carp at two different venues on the river. Overall we had a fantastic experience, caught (and lost!) some big fish and had a lot of laughs, but it was the first two days fishing with Tim that were the most memorable for me. For those two days we were based on the lower river near Benifallet with the absolute legend that is Pete Evans. Active in the specimen angling scene of the 1970’s and 1980’s, Pete had “retired” to Spain to concentrate on offering a guiding service from his home set in citrus groves overlooking the river.  Despite arriving late at night we were up bright and early the following morning to get our first proper view of the river and it certainly looked suitably big and daunting! 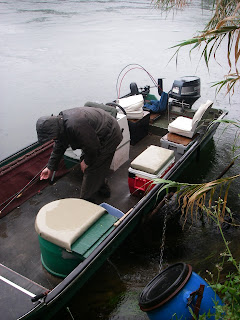 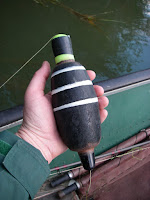 Heading down to the jetty we got the run down on tackle and methods from Pete. The plan was pretty simple – we would go to his known holding spots where we would fish super-sized, carp livebaits from his boat under big, home-made floats. Pike fishing on steroids! Pete had developed his own rigs in order to be able to fish such big baits effectively, consisting of two large single hooks to secure the bait by the top lip and tail root, connected to a large treble that remained free above the bait to provide the hooking power. 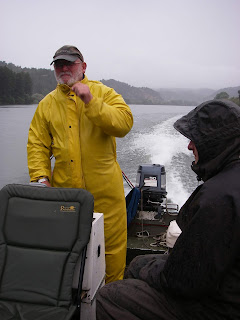 Definitely not a method for anybody with a sensitive disposition and I have to admit that I initially baulked at the idea of using a 4 lb carp as bait, until Pete put it into context by explaining the size and voracity of the predator we were after. The weather on the first morning was wet, cold and windy and we were decked out more like a trawler men as we pushed off from the jetty and headed upstream. Fishing was slow and it wasn’t until mid-afternoon that we had our first action. Tying off upstream of a deep depression in the river bed we let the baits rove freely off the back of the boat. Tim had graciously let me have first run, so when one of the floats started to draw away steadily like something out of “Jaws”, Pete gave me the nod to pick up the rod and then wind down into the fish. There was a brief sensation of weight and power and then nothing! The carp livebait came back still attached, but had been stripped of its scales on both flanks, presumably by rough pads of a big cat’s mouth. Pete could only ruefully shake his head and grumble “big fish”, before the bait was sent out to work the swim again. A little while later one of the floats was away again and it was Tim’s turn in the hot seat. Unfortunately, whilst he managed to connect properly with this one, it turned out to be a mere “kitten” of about 20lb. With that our first day ended, but it was a taste of things to come and we’d had some great banter, including me gaining the nickname of “Shirley Temple” off Pete because of my long hair! More importantly, I was back in pole position to take the first run the next day. The following morning we woke to find it dry and sunny and, after a quick breakfast, we were back on the boat and heading to a new spot. A change of tactics was also in order. Tying the boat off in a reed bed with a large slack in front of us, Pete set up two fixed paternosters to fish the baits just off the crease with main current. Whilst everything felt right, there was an air of seriousness in the boat and the banter of the previous day was curtailed as Pete went through the game plan should we get a run and we settled down to wait. However, we didn’t have to wait long! In a split second one of the floats disappeared and the line started scything through the water as the fish made off downstream. 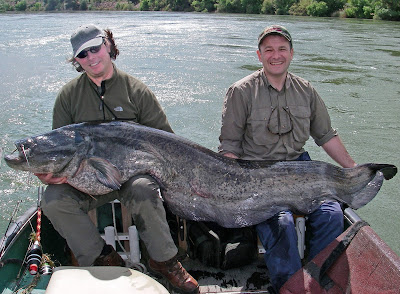 Almost without thinking I was up at the bow with the rod in my hands, Tim had got the other rod in and had put the fighting harness around my waist and Pete had untied the boat and pushed us into mid-river to follow the fish. After that flurry of action the actual fight was ponderous and protracted, with the fish staying deep and seemingly immoveable. All Pete told me to do was to keep the pressure on and let the rod do the work. I’ve no recollection of how long this stalemate continued, but after we had travelled several hundred metres downstream the pressure started to tell and I started to lift the fish off the bottom. Soon the dark grey shape of a big cat with a head like a dustbin emerged next to the boat. Worryingly, I could see that one point of the treble was only just nicked into scissors by the merest sliver of skin. However, Pete was quickly on hand and leant over the side to expertly guide it into the sling by its lower jaw. It was mine! When we lifted it into the boat it took a while to sink in. On the scales it went 133 lb – an immensely impressive creature and one that had reached that size on natural prey and not by gorging on halibut pellets! After a couple of trophy shots we slipped it back and watched it return to the depths. 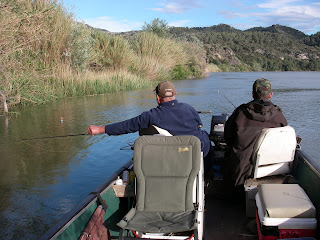 Whilst we were all feeling pretty elated with this result, the pressure wasn’t off as Pete was now desperate to find a similar fish for Tim. After sorting out the boat we headed over to a reed-lined bay on the far bank, where we sent out two free-roving baits to work the margin. This soon elicited a response, but from the way the float dithered and bobbled about Pete concluded that it was just another “kitten” playing with the bait. A little while later and we were on the move again to where the river narrowed slightly upstream of a gorge. 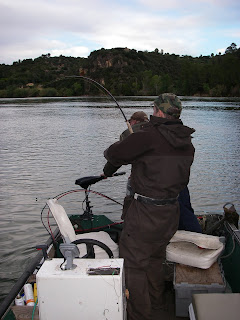 Tying us off on a tree, Pete instructed us to work the baits downstream to a large reed bed. My float was the first to reach the desired spot, so I handed the rod over to Tim. At this point all our eyes were focussed downstream while I just held the other rod, the float literally knocking against the side of the boat. Suddenly it disappeared with an audible “PLOP”, the rod was wrenched round and I was shoving it back into Tim’s hands! In complete contrast to earlier the fight was short and frantic, with Pete and I trying to keep out of Tim’s way as the fish charged from one end of the boat to the other. This appeared to tire the fish a lot quicker and Pete was soon leaning over the side again to secure it in the sling. Grins all ‘round, we lifted it into the boat to do the honours. At 118 lb it completed a memorable “double ton” and, as a black kite dipped its wings overhead almost in salute, was a great end to our two days on the river. 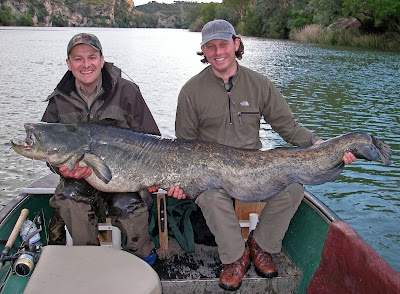 Back at Pete’s we spent an enjoyable evening drinking red wine while he regaled us with tales of his experiences with angling royalty, such as the late, great John Wilson. Whilst we were looking forward to the challenges of the next four days, it was with a tinge of disappointment that we said goodbye the following morning. As far as I am aware Pete is still going strong, although a change in regulations regarding livebaits has meant the use of more “exotic” baits, such as whole chicken carcasses! Tim has returned on a number of occasions, albeit to a venue further upstream, and has significantly bettered his 118 lber. Maybe I’ll go back for another go one day, but for now this trip will certainly stick in the memory. Adios!
Posted by Toodle 2 comments: