Short trip to the lake after work for the last couple hours of the day. Nobody in the corner, so dropped in there again. Put some chopped worm in as usual, but sprayed maggots over the top every few minutes in the hope it would get the small stuff excited with the perch following on. Seemed to work as within a fairly short time the swim was alive with bits that scattered every time I raised my arms. This was quite often as I was blowing my nose every five minutes as my first cold of the year took hold! Soon started getting bites on the worm, but failed to connect with the first few, so swapped the whole lobworm for a couple of dendras. Had desired effect. Had a couple of small ones before I had to use the landing net on a fish of 1lb 8oz. 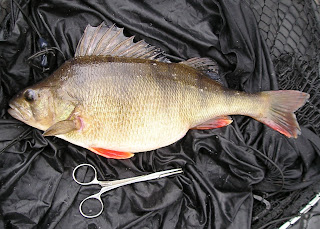 Bigger please!
Carried on and had three more small ones before it was too dark to see the float. Drove home with a dripping nose and thoughts of an early night!
Posted by Toodle 2 comments:

Have tended to fish for the perch once the rivers have closed on the same small club water for the last few seasons now. Mostly short sessions straight after work. No monsters, in fact I only got my first fish over 2lb from here last year. However, there have always been a few about over the pound mark and the occasional mention of much bigger fish on the club forum keeps drawing me back. It is also very quiet this time of year and this session was no exception, with just one other angler fishing the adjacent pit. I was therefore able to drop into my favoured spot in the corner. The chubber float was replaced with a waggler fished as a slider, so I could swing it underarm close up against the willows. 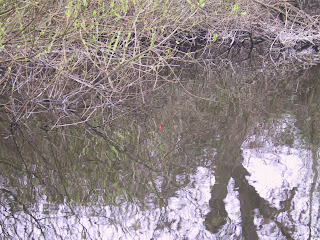 Put out some chopped worm and dead maggots mixed with a bit of Sonubaits Supacrush Green, dropped a lobworm on top and sat down to wait. Soon started to get knocks and lifts on the float that didn't materialise into anything. A few dead maggots in the margins showed there were quite a few fry about, so sat on my hands and waited for a proper bite. Was beginning to think it wasn't going to happen when the float eventually moved off and slowly disappeared. Strike met with decent resistance and my first stillwater perch of the year, a plump fish of 1lb 10oz. 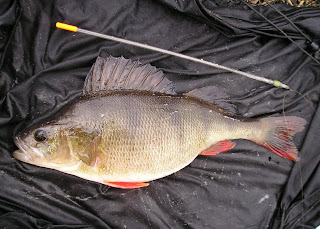 Thought that fish was the beginning of something, but there was no further action. Got very cold, very quickly after about 6 pm and I had to go to the car for another jacket. Packed up shortly afterwards as the mist descended, soaking everything. Car thermometer said it was 5 degrees Centigrade! What happened to Spring?

What was meant to be a pike trip turned into a double-header on the Dove. Drove down to a club water near Rugeley for first light to find it more reminiscent of an inland sea. Waves were rolling down the lake that I could have surfed on (well, my 11-year old son possibly could have!). With it being quite shallow, the wind action had stirred up the bottom and turned the whole lake a nice shade of chocolate brown. Couldn't see any point in casting my (expensive!) deadbaits into that soup, so got back onto the A38 and was in the carpark at Tutbury just after 7 am. Wind hadn't abated at all since yesterday, in fact it was probably stronger. Struggled across the field with rods and landing net waving around all over the place. Swim was just about fishable, so dropped in some chopped worm and maggot and set to work. Was amazed to see the float disappear first trot down and even more amazed to feel a perch on the end. Got the fish in, did the honours with the scales and found it just scraped over the two pound mark at 2lb 2oz. Result! Now for the rest of them! 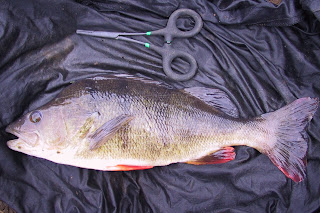 Unfortunately, the fish had other ideas and I didn't have another indication for two and a half hours. Whilst I'd arranged to meet my friend Tim at the venue later, I didn't really fancy being battered by the wind all day, so went back to the car for breakfast and to formulate a game plan. Two bacon sandwiches and two mugs of tea later I was back up the A50 to drop off any non-essential tackle, re-stock on bait and re-charge the camera, which had died in the cold. A little after 3pm I was back again. No sign of Tim, so walked over to the river. Chap was pike fishing downstream, but well away, so slid into the same spot. Had spent a biteless couple of hours when the chap came over and introduced himself as Andrew and we had a chat about perch and pike fishing. He'd literally just gone back to his swim when the float bobbed under the surface and held there. "I know what this is", I said to myself. Wound down to feel a lump on the end that grudgingly allowed itself to be pulled from under the bush. Half an hour of dogged resistance followed where the fish just refused to get its head up and shot off every time it saw me or the net. Thought it was going to be my "old friend" again, but when it did eventually roll into the net it turned out to be a nicely marked pike of 9lb 15oz. Another one with a taste for lobworms. 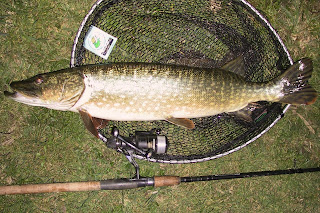 After the protracted fight and having to sort out tackle, I was left with about 10 minutes of fishing time before it got too dark to see the float. I wasn't really expecting anything else and so it turned out. Don't know what happened to Tim, but had another long chat with Andrew before once again adjourning to Hatton Fish Bar!

First of three sessions lined up this week. A quick afternoon perch fishing trip to the Dove. Unfortunately the weather wasn't exactly inviting. Cold with a strong, gusty wind and a smattering of rain. Walked across the field to find the wind blowing straight down the river. Luckily there was enough dry land at the bottom of the bank for me to get down out of the worst of it, although the swim still resembled the North Sea! 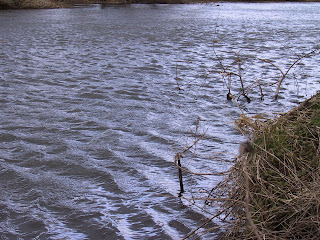 My float's in there somewhere!

Float fished lobworms over some chopped worm and dead maggots in a small slack downstream. Hadn't had any indications after an hour, so shallowed up a bit to let the float swing in closer to the bank. First trot down it seemd to do the trick, although not the species I was after. The float bobbed and held an inch under the surface. Wound down and immediately felt a dead weight on the end that I knew wasn't a perch! The fish kicked a couple of times, then let me draw it upstream without any fuss. Didn't have the protracted tug of war as last time and after a couple of half hearted runs it was in the net, a scraper 10lber that looked oddly familiar. Checked back on the photos on the camera to find it was the pike I'd had a couple of sessions ago! 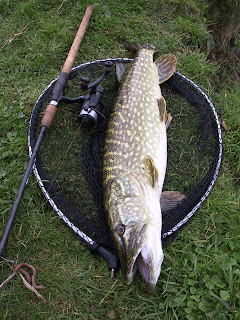 Fished on for another couple of hours without any further interest. Was chilled to the bone when I got back to the car. A quick stop at Hatton Fish Bar for a portion of chips helped put that right.

Had a two hour slot between finishing work and getting home to babysit while the wife went to her Italian lesson. Decided to go for quick chub session on the Soar. Had driven over the river on Friday when it was still carrying a lot of colour, so was a bit suprised to see that it was clear again. Headed for the usual spots. Started off on lobworm, but had no interest until swim number 4 when I missed my first bite by being far too hasty with the strike. Let things settle down, then put on a lump of cheesepaste. Had made myself a "baby's head" with all of the left over cheese from Christmas. It was just starting to ripen nicely! First cast in, the tip pulled 'round and a chunky 3 lber was soon in the net. 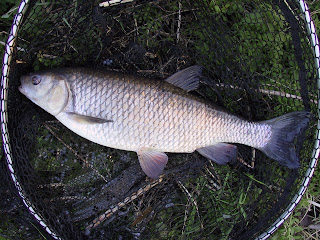 Er....Loggerhead (running out of names!)

Went back and fished my first two swims without any further success. With an eye on the clock I was away before it was fully dark.

Weather didn't exactly look inspiring when I woke up this morning - cold, wet and miserable - but it was the first opportunity to go fishing for a while, so the perch gear went in the back of the car for a quick session after work. As soon as the clock ticked 'round to 3, I was off out the door and on my way to meet my mate Tim at Borrowash. Happiness was an empty carpark! Wandered down and got set up. Had a phone call from Tim to say the job he was on had been delayed, so started without him by trotting a lobworm around any likely looking spots. Hadn't had anything by the time he arrived. He'd had to leave home in a hurry, so only had a lure rod and a few rubbers that he proceeded to throw around downstream. After getting bitten off by a jack he came and sat next to me, just as I was trundling the float down the side of an old reed bed. Float duly slid away and I struck into what I thought was a pike due the initial sullen resistance. After a few seconds the pike livened up and turned into a perch. However, by the time it rolled over in the net it had changed into a typical Derwent chub! 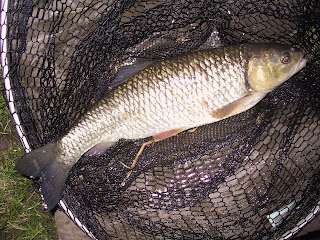 Soon afterwards Tim's phone rang and he was gone, but not before we made plans to meet up on the Dove at Tutbury next Thursday for a last minute fling. Got the tip rod out and flicked a lob on a link leger downstream into a slack I'd baited earlier and popped the bobbin on. Just as well. I had just turned to pack the float rod away when I heard the bobbin hit the rod. Picked up the rod to feel definite chubby vibes on the other end. So it turned out. Slightly bigger than the first, with a healed wound under the dorsal and a funny yellowpatch under the chin. 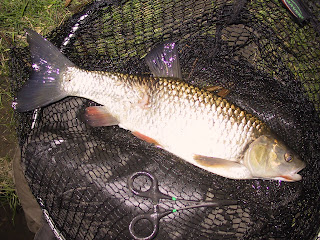 Fished on into dark, but apart from a quick lift on the bobbin, that was it. A big perch eludes me yet again!