Down in Pembrokeshire for a few days over the Bank Holiday weekend and for once the tides and weather seemed to be spot on. The first morning saw me up at 0530 hrs and down at the estuary at Lawrenny for low tide after an elusive first bass of the year. 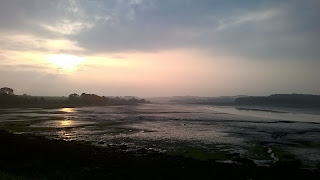 Conditions again looked perfect (as they did last time!), so started off with the slider/teaser combo during slack water in an attempt to get one off the top. 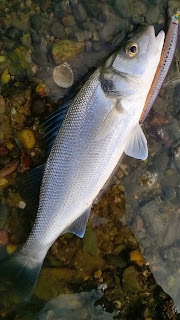 When the incoming tide picked up an hour or so later I'd not had a sniff of a bass, although the mullet were now passing me in droves on their way upstream. Switched over at this stage to an IMA Komono in candy and then, as the water clarity improved, my favourite Megabass X-120 in sardine and carried on flogging the water. Was beginning to think that another bass blank was on the cards when I eventually had a solid thump on the rod tip. Even then I was thinking that I'd foul hooked an unfortunate mullet! However, I was soon pleased to see that it was a bass, albeit a little schoolie, hooked fair and square by the X-120. Watched him swim off with some relief - definitely a "fish of a thousand casts"! Carried on with renewed enthusiasm, but to no avail. Dropped into Raven Trading in Pembroke Dock on the way home to pick up some ragworm and to glean a bit more local knowledge from the obliging John and Jamie Henton. The next morning saw me putting the bait to good use down at Hobbs Point. I'd even managed to drag the boy out of his pit, so challenged him to a mini-species match. I'm always at a slight handicap in that, despite now being a strapping lad of 16, he still insists on me baiting up for him and unhooking his fish! However, I had no doubt that I would still give him a good thrashing. 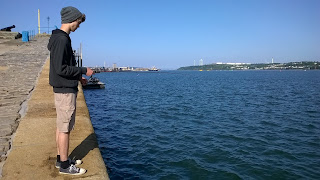 Set up two rods, one with a scaled down "one up, one down rig" and another with half a set of sabiki's, both baited up with scraps of the ragworm. We both started catching steadily from the off and it was soon apparent that the dominant species were gobies - both rock gobies and black gobies. There must have been hundreds of them down there judging by the maddening knocks and rattles on the rod tip as soon as a bait hit bottom! However, thankfully a few ballan wrasse were about to put a proper bend in the rod for both of us. 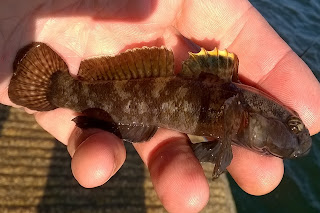 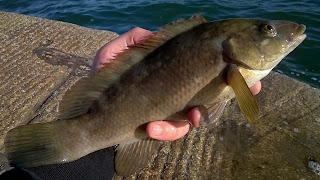 James was edging ahead of me slightly when the two hour mark passed, despite me trying to claim a small edible crab as an extra species (no chance!). He then spotted a shoal of fish apparently following his bait up from the bottom. By letting his rig dangle just under the surface he soon had a sand smelt to add to his tally, a big-eyed predator in miniature. Not wanting to miss an opportunity, I followed suit and had another three before the shoal melted off. 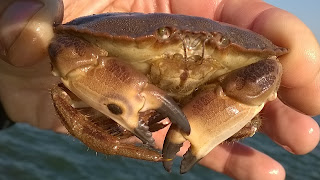 After that it was back to the gobies and the odd wrasse. When the three hour mark and end of the session arrived we'd had four species each, but he'd beaten me on numbers, 24 - 21! With one win under his belt he was sufficiently enthusiastic to get out of his bed again and let me have a rematch, so the next day we were down at the mark bright and early once more. Unfortunately, whilst still bright and sunny, a chilly wind had got up and was blowing straight into our faces. 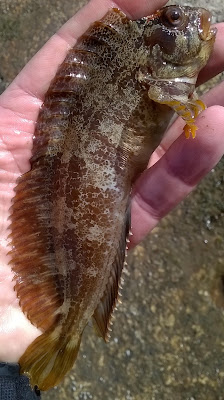 However, this didn't seem to put the fish off as James was straight into the fish with a double shot of rock gobies on his first cast as I was still setting up my rod! By the time I'd got a bait in and had a rock goby of my own he was romping away, even with me now refusing to bait up his hooks for him (I was still having to cut up the rag though....wimp!). We'd both added a couple of nice male black gobies with their banner-like dorsal fins when I sneaked a little ballan wrasse. However, it was James who stole the show next with a fish I have yet to catch myself, a cracking tompot blenny. I was a bit envious  to say the least, but pleased we'd caught something different. Unfortunately it was back to the gobies again after this but, as the wind strengthened and water coloured up from the wave action on the muddy banks, even their interest seemed to be on the wane. We were also getting quite cold and were just in the verge of packing up half an hour early when James again spotted a shoal of sand smelt pursuing his bait. A quick switch to a mini sabiki rig saw both of us add to our totals. We totted up after this to find he'd done me again by 26 - 23! We'd both had great fun in the process and, after a bit of lad 'n' dad banter in the car on the way home, resolved to have another rematch the next time we're down in the summer. In the meantime, I've got another trip to Gran Canaria coming up and hopefully a few more "exotic" species to catch. 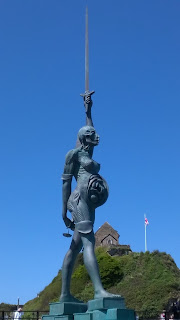 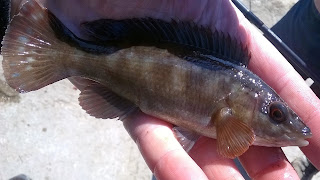 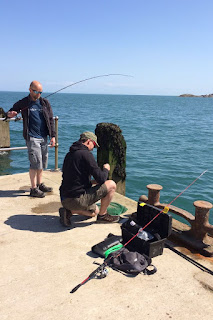 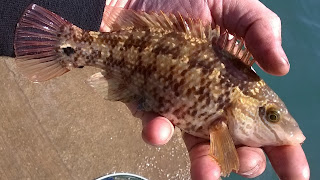 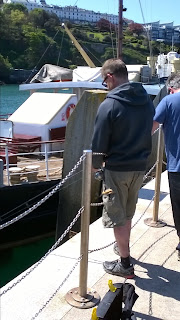 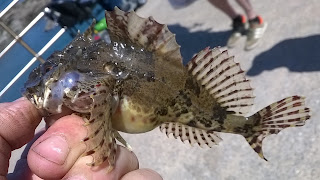 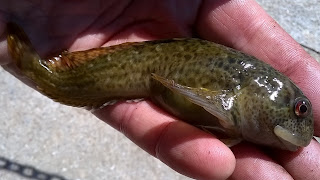