Another grayling trip, but this time a much anticipated return to Tim's syndicate section of a "Derbyshire river" where the grayling were fewer, but where there was a chance of a real lunker. As with all pre-arranged sessions the weather doesn't always play ball and unfortunately the bright, sunny conditions of the last two days were due to give way to rain...lots of it. Indeed, it was already black in the west as I headed out on the A52 and, as the first few raindrops hit the windscreen, I was treated to the bizarre sight of a brilliant, golden sunrise in my rear view mirror and the full arc of a rainbow over Derby. Met Tim at the river and we quickly got togged up, trying to avoid getting too wet in the process. Walked up to the first section and Tim did his ghilly bit, pointing out from experience where he thought the fish would be lying and where I should be putting my flies. Lost and then landed a small grayling early on, but had no further joy in that spot so we moved on. Again Tim put me on the money - second cast I had a better fish on, but again it managed to shed the barbless hook. This prompted a few words from Tim about putting and keeping the pressure on, before he moved a bit further downstream and left me to work the rest of the swim. A few casts later I had a nice, definite take from heavy fish. Despite a few hairy moments where I had to give it some stick to keep it out of the fast water at the tail of the pool, I soon had a cracking male grayling safely in the net. 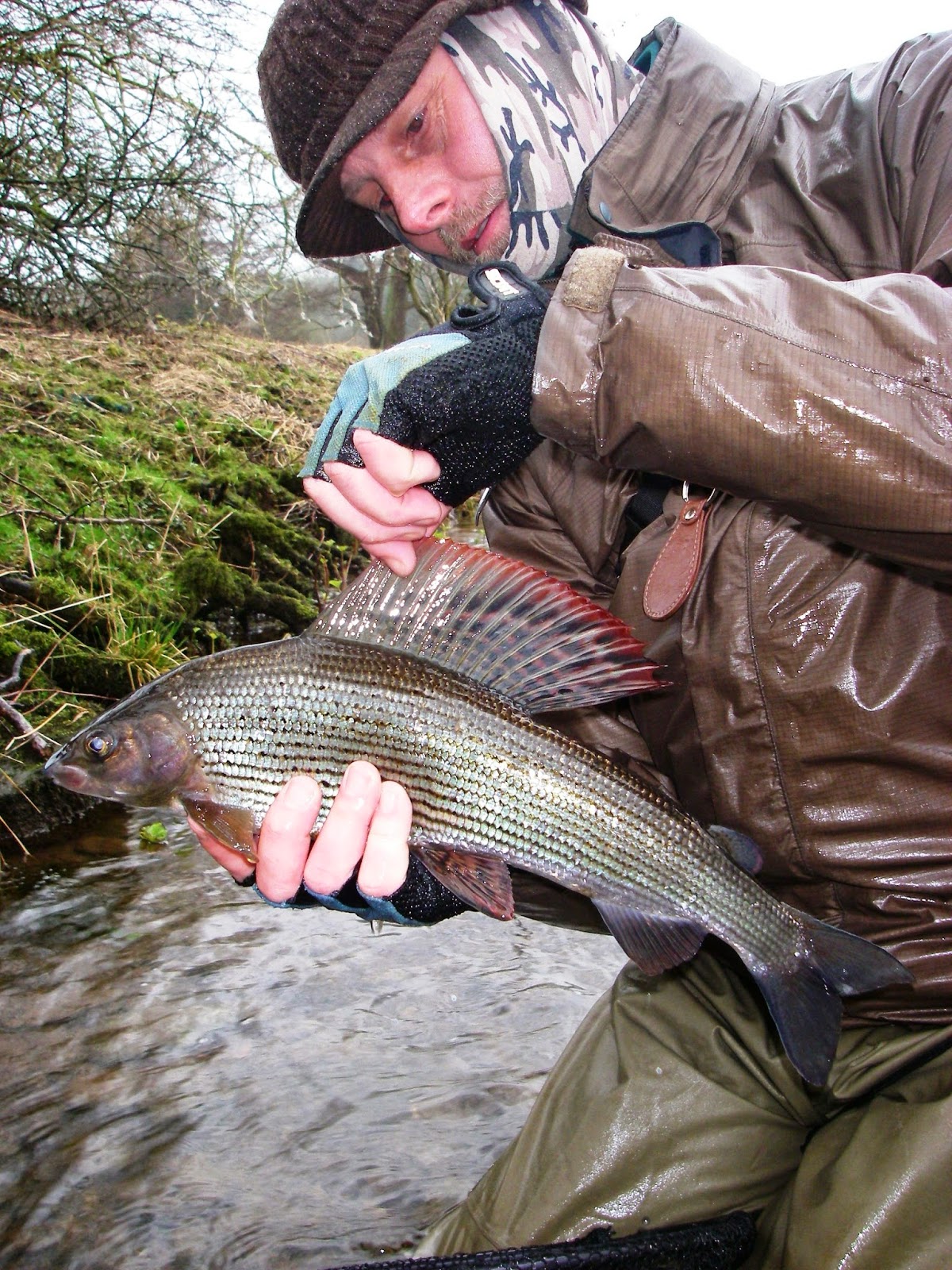 Beauty! And no comments on the head gear - it was cold!!

Carried on downstream trying a couple of other spots, but it was obvious that it was going to be a bit of a grueller. Weather wasn't helping - cold, wet, windy..........horrible in fact! However, didn't seem bother the dippers - they were too busy noisily resolving boundary issues with their neighbours to notice. Tim eventually managed a couple of grayling and I had a nicely conditioned, acrobatic, out-of-season brownie before we stopped for a bite to eat and a cup of tea, sheltering under the bridge to stay out of the wind and to try and warm up a bit. 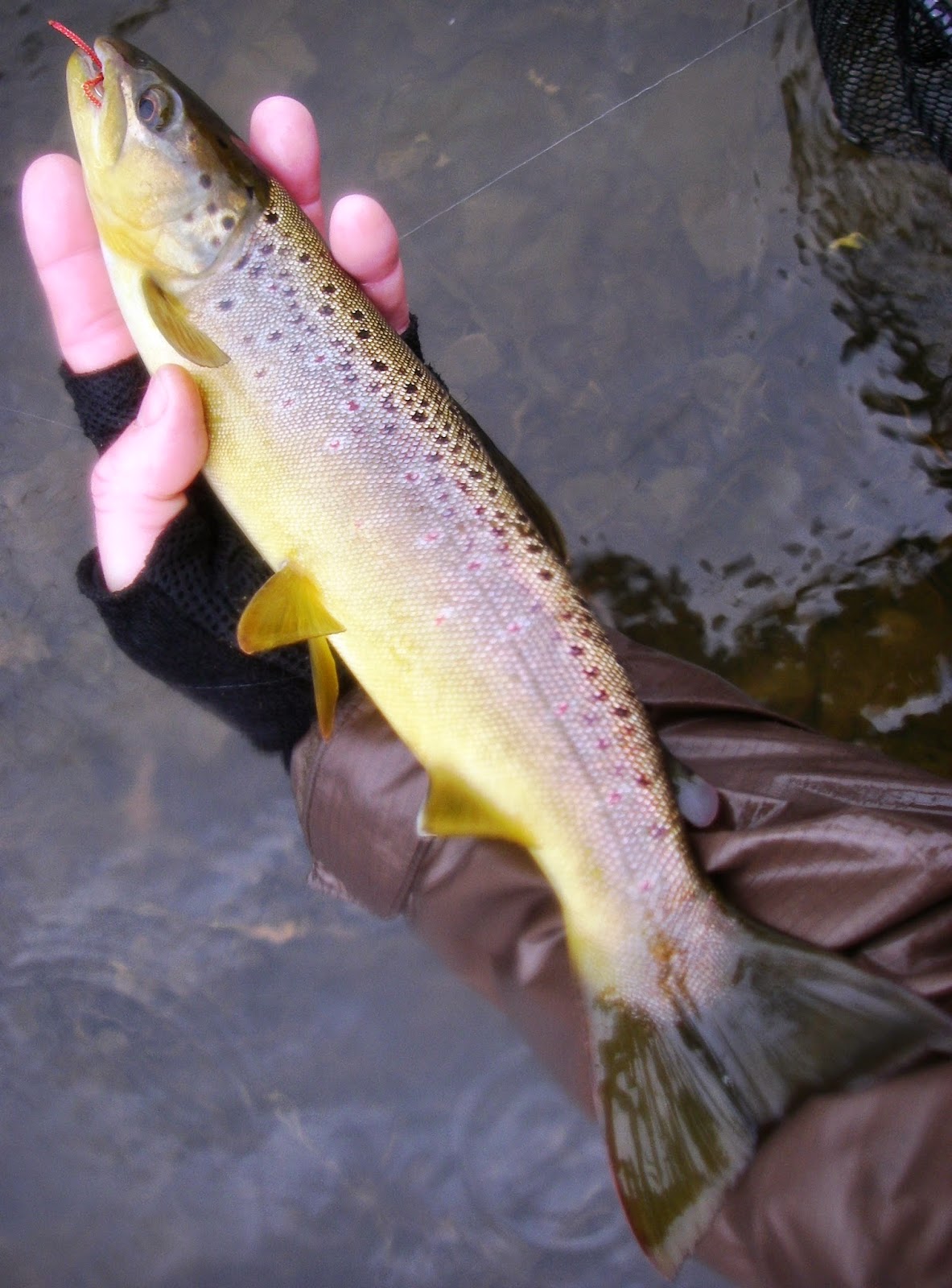 Fished through the next section without a sniff, but was surprised to see a couple of fish rise in the faster water. A closer look revealed a few, brave large dark olives had started to hatch and float down the river despite it being so miserable. Caught up with Tim at the "banker swim". However, despite both of us fishing it hard, nothing was to be had from there either. We then moved down to the "guaranteed 3lber swim" (I think Tim was trying to keep my spirits up at this point!) downstream of a broken weir. Again Tim let me go up the swim first (what a gent!) and a few casts later I finally had another decent fish on. Not the 3lber, but a deep, fat hen fish that looked if it had recently had a run in with a rather ambitious cormorant judging by the multiple beak marks on her flanks. 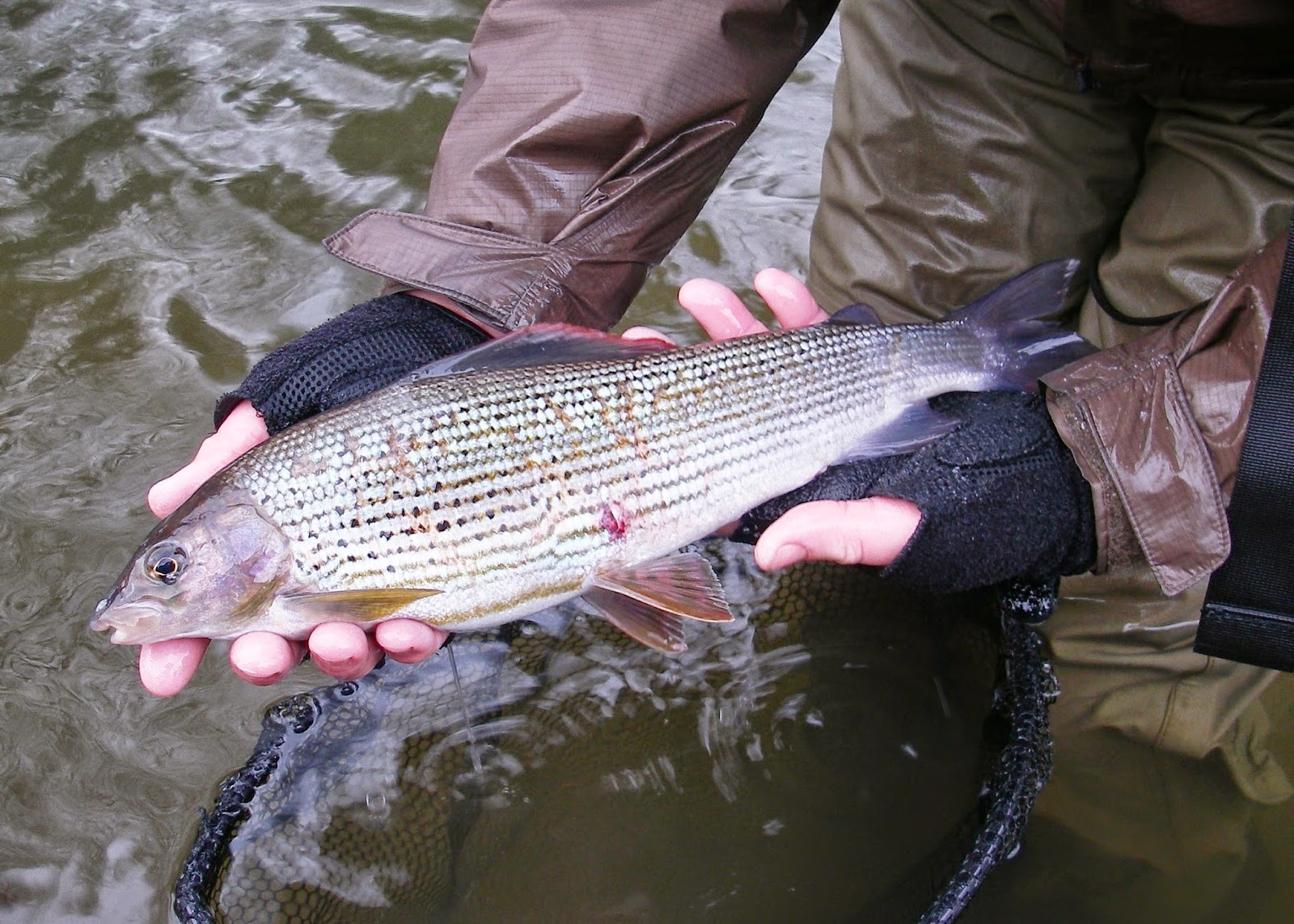 We were thoroughly wet and cold now, so headed back towards the cars. Had one more small grayling out of the pool near the bridge and then called it a day. Whilst the day had been hard work, it had been good to meet up with Tim and catch a couple of decent fish. However, I've never been so glad of the car heater as I was on the way back home!
Posted by Toodle No comments: