Finally managed a break from work, decorating and building kitchen cabinets! Arranged with my friend Tim to go for a "grayling masterclass" on his syndicate water in Derbyshire. The landowner had imposed a fly only rule since the last time I went with him, so it was going to be a day of Czech nymphing, a method I'd never tried before, instead of the float and maggot. Got to the venue to find that the river was dropping nicely after the rain in midweek. At the first swim Tim got me set up, explained where the fish were likely to be lying and then gave a quick demo of the technique before I had a go myself. Soon got used to pitching the two weighted flies upstream then watching the line for any unnatural movements as they bumped back along the bottom towards me. The first spot proved fishless, so it was off downstream to try the next one. Tim pointed out where there was a hole scoured out in the bed, which was likely to hold a fish or two. More by luck than judgement I managed to drop the flies right on the spot first time, the line twitched and I lifted into fish, not huge, but my first grayling on the fly. 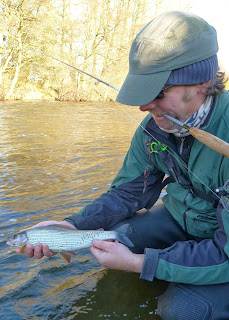 Moved down to the next swim and again Tim's local knowledge was spot on as he pointed me towards a flat spot in an otherwise pacey section of water. A couple of trots through and everything went solid. Thought I'd hooked bottom, but then felt the throb of a better fish on the end of the line. Played it into the side under Tim's instructions, keeping the rod tip low until it was time to net it. Turned out to be a nice male around the 2 lb mark. 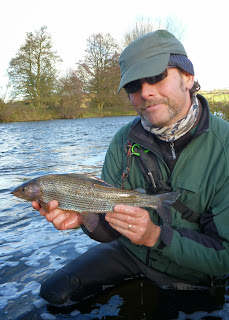 And the lady's other half!

After a quick coffee it was down to the next spot, a deeper glide at the tail end of a pool. Had been chatting away with Tim, fully into the rhythm of casting when I had another take in front of me. Lifted into a fish that shot downstream towards against a fully bent rod and then just hung on the end of a taut line in the faster water. Knew it was big fish as I could do nothing with it other than just keep the rod tip low, keep the pressure on and pray that the hook didn't pull out. Eventually I started to make headway, the pressure of the rod and some scare tactics by Tim, wading into the river downstream,  forcing the fish back up towards me. However, it soon became apparent there was a problem as the angle of the line into the water was all wrong. Lifted the rod tip to find the line festooned with leaves, there was a judder and the fish was gone. Tim's expression said it all,  I'd lost a very big fish.........Oh well, onwards and upwards! Carried on for the rest of the afternoon, trying a variety of spots, picking up a few more grayling between us and three out of season brownies to me before the light faded and we made out way back to the cars.

Thoroughly enjoyed the day despite losing that fish and the fact my right shoulder was in agony by the  time I got home (Czech nymphing is hard work!). Will certainly be a method I'll be using again and hopefully I'll be back after the "one that got away".

Work, buying a new kitchen, weekends away at friends and relatives......I could go on! Needless to say there hasn't been much fishing done lately. A trip down to Saunton with the lads was an opportunity for another crack at the bass with the lures. However, day one on the coast near Woolacombe drew a blank. The next morning saw me on the estuary just after dawn for a social with Joel Squires (http://www.joelsoul.co.uk/). Conditions seemed perfect - the light was good, the wind had dropped and there were even birds feeding on shoals of bait fish, albeit tantalisingly out of casting range most of the time! Worked hard with surface lures, following the incoming tide up the gullies and making sure we didn't get cut off in the process. 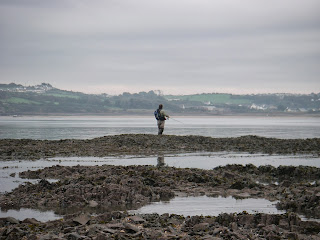 Joel on the estuary

Retreating back onto the beach I tried "trotting" a soft plastic on the current but, apart from a tiny "basslet" to Joel, our luck just wasn't in. Bit frustrating given such good conditions and the fact that the following weekend in Pembrokeshire (and the last chance for a bass) was completely blown out. Never mind - next year! Back in Nottingham, a couple of trips with the light lure outfit following up a "hot tip" about some big perch just resulted in a few small pike before the heavens well and truly opened and flooded rivers brought things to a halt. 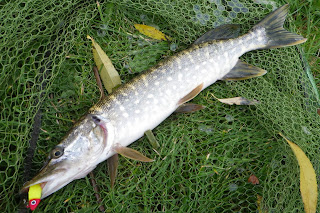 Jack on a Big Hammer

At least I've caught up with my reading, not least the great blogs and online magazines that are out there. One of the latter is http://www.esoxworld.com/, which is currently available as a download, an iPad App and PC/Mac App and has some great articles on pike and muskie fishing in the UK, Ireland, Europe, Canada and the United States. Another good fireside read is http://www.catchmagazine.net. Even if you're not a fly fisherman, you can't fail to be impressed at the amazing photography and visually stunning locations. It's certainly got me hankering (on a less global scale!) after some fly-fishing for grayling once the rivers have dropped back to normal. If you're cack-handed like me and can't tie the simplest fly to save his life, http://www.islandflies09.co.uk/ are well worth looking at for value, quality service. Just hope the weather improves a bit now!
Posted by Toodle No comments: