Took time off between Christmas and New Year, not only to recover a bit from the seasonal excess, but also to delay the inevitability of having to go back to work! Goes without saying that a fishing trip was to be factored in at some point so, after checking the weather forecast and river levels, I headed out this morning to the River Derwent, stopping off on the way to pick up the usual "pint of mixed" from Bridge Tackle in Long Eaton. 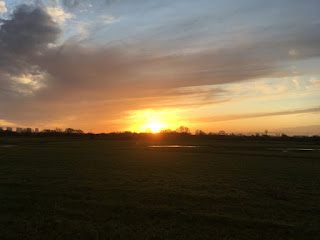 Got to the carpark just as the sun was creeping over the horizon and made my way to the river over the fields, which just a few days ago had been completely submerged. Just some pockets of standing water in the furrows and depressions remained of the floods that had caused chaos in Derbyshire a few weeks earlier. In that context, it was possibly trivial that my concern this morning was whether the grayling I'd successfully sought out last season had weathered the storm and were still present.

At first glance the river looked a bit higher and faster than when I had fished it previously, but it was running clear and I was confident that I could find some quieter water with hopefully some fish in residence. Headed up to the top swim, a long, tree-lined and sheltered glide. Found that the river was indeed still about 30 centimetres higher then normal winter level. However, I managed to get in at the side in my chesties, which allowed me to run a stick float downstream past the overhanging vegetation on the near bank. Third trot down the orange tip of the float disappeared and my first grayling of the day was soon in the net - not a monster, but good to see. 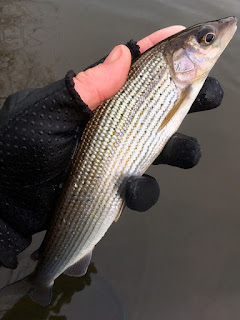 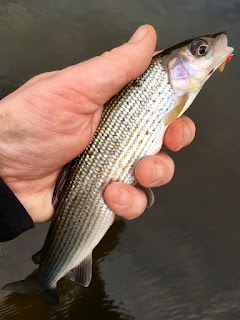 A few casts later and I was reminded how nerve-racking and frustrating grayling fishing can be as I lost two, very good fish in consecutive casts to hook pulls. Both fish shot out into the middle of the river and then hung there like a dead weight, just giving an occasional head shake that usually signifies a big grayling. In this situation, unless they decide to swim upstream, it is a question of trying to ease them up slowly against the force of the current whilst praying that the hook holds. Unfortunately, my usually reliable size 16 Drennan widegape wasn't up to the task and was soon swapped for a Kamasan Animal instead. Managed to successfully landed a much smaller fish before it went quiet and it was time to move swims. Further downstream I again found some steady-paced water down the near bank. First trot down my double maggot was taken by a nice fish that had been nailed by the Kamasan. 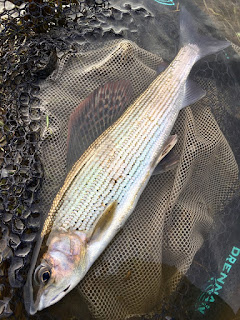 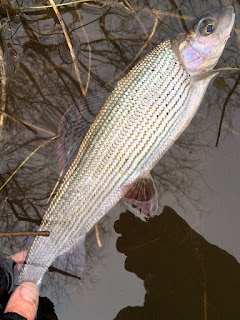 Had a smaller fish and then hooked another nice fish that just came in like a sack of potatoes. A closer look reveled that it was actually the fish I'd had a few casts earlier. It must have gone straight back to it's lie and carried on feeding, but obviously didn't have the energy to put up another fight! Again, after it went quiet, I headed down to my final swim where I had a couple more fish, including the best one of the day. Ended up with a round dozen, not including that recapture, which I was pretty pleased with, although I'll be back after those lost "monsters".
Posted by Toodle No comments:

I really enjoyed those two sessions on the River Soar at the end of September. There's something really satisfying about going back to basics and catching what most people would consider "tiddlers". For those of us not born into an era of matching carp outfits and waters stuffed with enough idiot fish to make you an instant "expert", it's where we started and learned our craft and it's what I find myself hankering after more and more as I get older - plus I can't be arsed to carry the same amount of gear around that I used to! 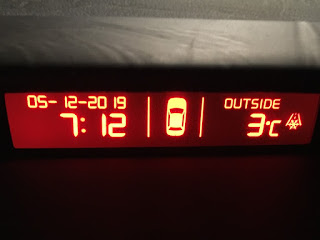 However, I failed to wet a line in freshwater again for two whole months, the obvious reason being the weather. No sooner had the local rivers started dropping when the next weather front came barrelling in and we were back to square one. It was a relief when December brought with it a period of cold but dry, settled conditions that allowed river levels to return to somewhere near normal. Early Thursday morning therefore saw me heading East into Staffordshire with one species on my mind.

Arrived at the venue at first light and got togged up in my neoprenes before squelching over the still-waterlogged fields, burdened only by my float rod, landing net and small bag of bits. The river was low and clear and I could see that some more "remodelling" had been done in my absence by the recent floods, with one of more unusual pieces of flood debris being a very wet and bedraggled ogre! 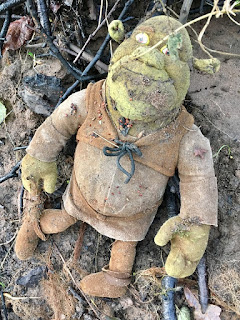 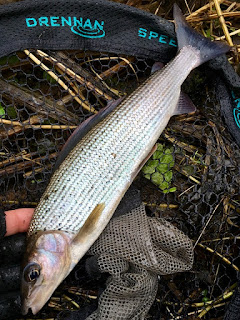 Sneaking into the top swim I was soon watching the blaze orange tip of my float being tugged at by the boils and eddies as I allowed it to search its way down through the pool. Second or third trot down it disappeared and my strike was met with the familiar thumping and banging of a hooked grayling that had been tricked into taking the single, red maggot. 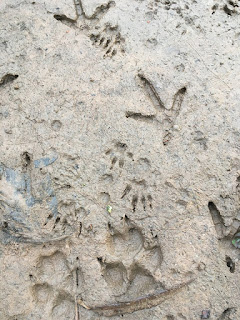 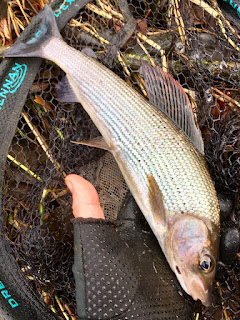 Had a couple more grayling out of the swim before saying goodbye to Shrek and moving on downstream, pausing to look at the various animal movements recorded in the newly exposed mud. Once again it was a case of dropping into all the familiar spots (and some not-so-familiar ones, newly-created by the floods) in order to try and locate the fish. I had thought that the recent conditions might have shaken them up a bit and this seemed to be the case as I struggled to catch in normally prolific swims, just winkling out the odd fish here and there. By the time I got to end of the section a few hours later I certainly felt that I'd worked very hard for my 18 grayling and solitary brownie. 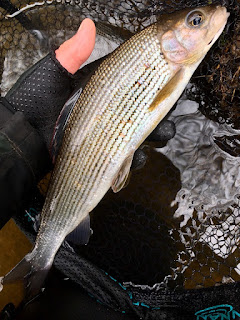 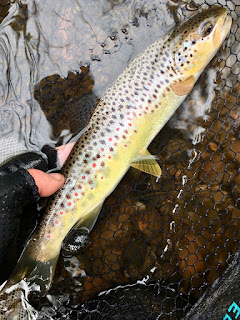 Back at the car I found that another angler had arrived after me. Spotted him walking across the field in the gloom, so waited to have a chat. Whilst he'd been fishing the fly, he too had struggled, with just half a dozen fish to show for his efforts. Made me think that they'd not really been in the mood rather than anything else, but it had been good to get the first grayling trip of the winter under my belt. Simple pleasures!