Flashed down to Exmouth again this weekend to pick the boy up from university so, not to miss an opportunity and having checked the weather and the tide times, the LRF gear was put in the boot with the overnight bag. 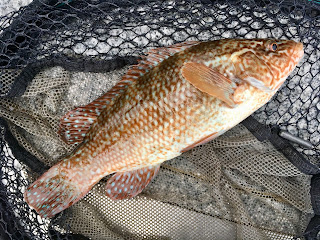 A gloriously sunny Sunday morning saw my friend Simon, his son and I heading to the docks to catch high tide. Arriving at our favourite spot at "the compass" we found the water clarity much improved since last visit and therefore hopes were high as we dropped our Gulp and isome-baited rigs down amongst the rocks and the structure. However, a distinct lack of immediate interest seemed to indicate there didn't seem to be much at home, not even a usually obliging shanny or tompot. 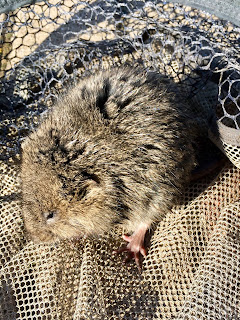 Eventually, after a couple of half-hearted nibbles, I had a proper bite that resulted in a small, but colourful ballan wrasse. Had just popped him back when I spotted what looked like a rat swimming towards us from the direction from the other side of the estuary. Heading for the nearest rock it managed to crawl up out of the water, but then just sat there being buffeted by the swell, probably cold and exhausted. Managed to coax it into landing net without any problem and was surprised to find it was actually a water vole! Carefully popped it out of harm's way under some nearby undergrowth where it immediately started preening and drying itself off. When we checked on it a bit later it had gone, hopefully feeling a bit better and wiser after its recent adventure. Decided at this stage that a change was in order, so we headed over to the other side of the entrance to the marina.

The tide had started to ebb by now and was already ripping past the end of the boat ramp, creating a back eddy in front of the sea defences. First cast the tip banged over as the isome section was taken on the drop, resulting in a small pollack. 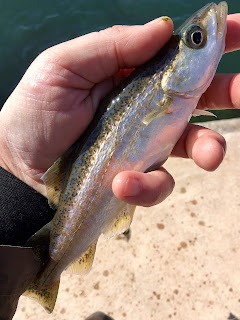 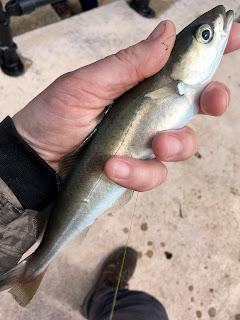 Carried on casting out the dropshot rig underarm and just letting it swing in on a tight line. Invariably, a few knocks and bumps were followed by the tip bending fully round as another pollack grabbed the bait before it hit the bottom. 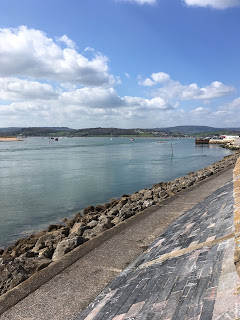 I could have switched to a more suitable set-up, such as a jig or a metal lure, but as the fish seemed to be packed into a small area and obviously having it there didn't seem to be much point. This got to be so addictive that, by the time the wife and the boy arrived, I'd had over 40 fish, with the best of them nudging the pound mark. I had fully intended to try for some different species once the tide retreated down the boat ramp, but as time was limited I said that I'd hit "50" and pack up. After pollack number 49 I swung the rig out for what was the final time. Again the bait was taken on the drop, but this time the culprit was a coalfish. I'd seen reports that these were in the area over the winter, so was pleased to catch one before they disappeared again. Unfortunately, the wife made me stick to my word after that, so we headed back along the seafront that was now packed with people out enjoying the warm weather.

Wonder if "Ratty" made it back to Dawlish Warren?
Posted by Toodle No comments:

Couldn't help thinking that my timing and hence the conditions weren't quite right the last time I went pike fishing, so there were to be no excuses this time. The day I picked was overcast, but still mild, the river was at normal, winter level and clear - what could go wrong? 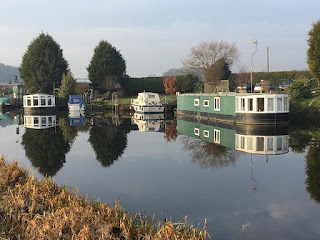 As I headed upstream from the car park at first light there wasn't even a breath of wind and, as the sun slowly crept over the horizon, the surface of the river became a mirror. Even more puzzling then that the two, fresh dead baits that I placed carefully in the margins failed to attract any attention for at least the first hour. When a take did come it was savage, the downstream float disappearing with an almost audible "plop", swiftly followed by the "smack" of the bite indicator hitting the back rod rest.

Unfortunately, whatever had grabbed my lamprey section had not taken it down sufficiently for the hooks to take a proper hold, so my strike met with only momentary resistance and then nothing. A quick glance at the still bloody lamprey and it was put back right in the same place. A couple of minutes later and the float disappeared again, darting away under the surface - same fish or a travelling companion? This time the hooks found a purchase and a jack soon graced the net. Blank avoided! Leapfrogged the rods downstream with increasing frequency as runs failed to materialise and my impatience grew. Eventually, a rod placed over next to a boat on the far bank resulted in another jack. 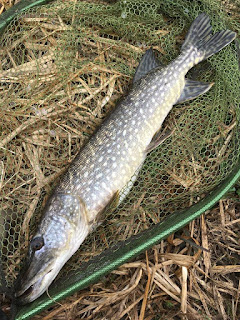 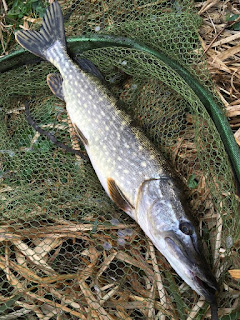 With him sat in the net in the margins awaiting unhooking I wound in the the other rod and recast it over to the far bank. Tempting fate? Yep! As I went back to deal with the pike in the net, another decided to make off with the smelt I'd literally re-positioned seconds ago. Got the hooks out and the fish back in the water as quickly as possible, but the bait had already been dropped and the chance had gone. Frustrated, I threw everything back in the car and drove a short distance downstream to try and salvage something from my morning off. However, my normally reliable swims failed to produce and I headed home disappointed, but also very troubled. Where on earth have all the pike gone?

Over the next few days work and the weather conspired to prevent me going out again until, finally, a short window of opportunity appeared one afternoon. Leaving the office at 3 o'clock and armed with a pint of maggots I headed out with the float road once again to the River Derwent. Arriving to find a couple of cars already in the car park I walked to the only spot that I knew would be fully sheltered from the brisk prevailing wind. Thankfully the swim was free, but there were two anglers just upstream. Went to check that they were okay with me dropping in just below them, but found they were packing up not having had anything on the feeder all day - "not even a grayling"! Undeterred, I got set up and waded out into position as they headed off. The river was gin clear and I could easily see the bottom off the end of the rod top. However, second trot down the float disappeared and I was into my first fish! 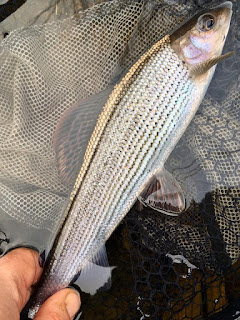 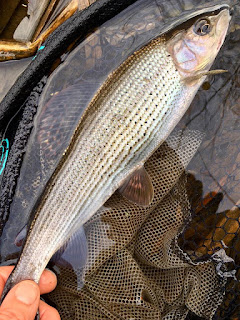 Carried on trotting away until I couldn't see the float any longer and the cold had started to seep through my neoprenes. Whilst the bites hadn't been prolific, I had still managed to catch ten nice grayling in a couple of hours. Headed back to the car, my satisfaction tempered slightly by the thought that this might be the end of my river season. Oh well, perhaps the weather won't be as crap as it's meant to be?!

Pike stats update - looking through my diary I've totted up 32 pike sessions, mostly on the River Soar, since 2010. I've had 117 fish, but only 10 of these were doubles, with the biggest going 13lb 12oz. Think that says it all about the scarcity of big pike in the area!
Posted by Toodle No comments: