We were down in Pembrokeshire for the May Bank Holiday and it happened to coincide with some early morning, low tides down on the Cleddau estuary, which I hoped would be perfect to snag a few bass on the lure rod. First morning saw me up at 5 am and down at Lawrenny just after dawn. Unfortunately the weather was less than inviting - grey, misty and with a sharp, cold wind pushing straight up the inlet off the main channel. Unusually, having never seen another fisherman all the times I've been there so far, I was joined by two other hardy souls with the same thing in mind. However, despite thrashing the water for a couple of hours solid, none of us could muster a fish between us and I went home for breakfast feeling cold and dispirited. The next morning I had an hour longer in bed and woke to find the weather a lot more promising, so set off down to the estuary again with renewed enthusiasm.﻿ 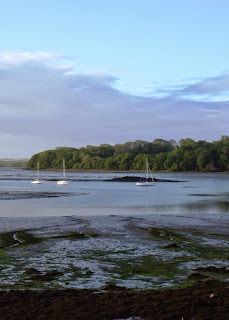 Early morning at Black Mixen Pool
There was still a breeze pushing up the inlet, but the wind had dropped considerably from the previous day and it was bright and sunny. It was still low, slack water when I arrived and, whilst there was a bit of ripple, conditions looked good to try for one off the top. Tried a new rig for the first time after reading a post on Austen Goldsmiths blog Zen Sportfishing, setting up with a IMA Skimmer with a "teaser" fly (a sandeel imitation) on a dropper three feet up the leader.﻿ 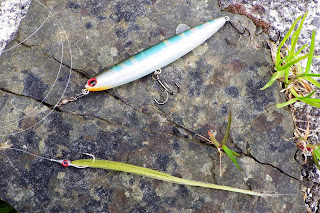 Bass fodder
Set about "walking the dog" and was encouraged by a swirl behind the Skimmer on my first cast. However, a few casts later it was the fly that was taken by a small schoolie.
﻿ 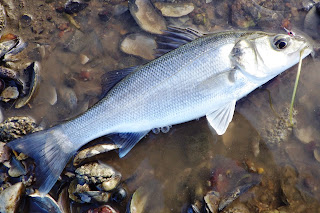 One on the teaser


Carried on with the surface lure until the tide started pushing in and wind picked up, then swapped the Skimmer for an old favourite, the Megabass X-120 SW. Had one come off halfway in before landing another schoolie, all spines and bristling indignation, a few casts later. 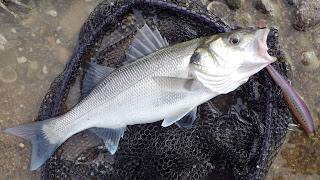 Mr Angry!
Worked my way down to the point at the mouth of the inlet without any further interest. The tide had pushed in quite a way by now, filling the gullies on the beach, and creating some slack areas. Popped the Skimmer back on and made my way back to the car, casting down the gullies as I went. A few minutes later a swirl behind the Skimmer heralded another little bass, clearly intent on a substantial breakfast! 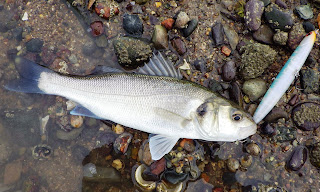 Greedy guts
That proved to be the end of the action, so left the beach to the dog walkers and headed home for breakfast. Was pleased that the bass liked the new setup, although here's hoping they're a bit bigger next time.
﻿
Posted by Toodle 1 comment:

Another weekend trip down to Saunton and another chance to have a go at those urban brownies in the little River Caen that runs through the centre of nearby Braunton. 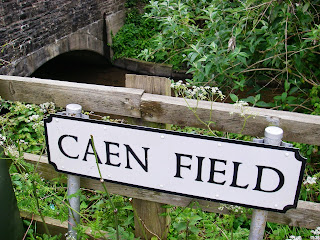 A quick recce on the Saturday found the river low and clear despite the recent rain, but the sight of a couple of little brownies sat behind the ranunculus gave me some hope for the following day. 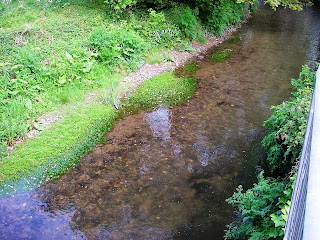 Got up bright and early on the Sunday morning and was soon working my way upstream from the fish ladder, casting a goldhead nymph up to the head of the runs and into any likely looking spots as I did so. Had a couple of modest, little scrappers, but also lost a few through their airborne acrobatics. 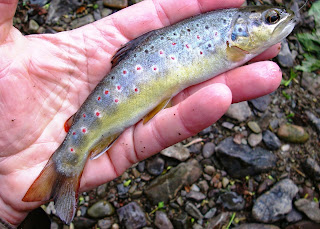 The graffiti was still there on the bridge over to the supermarket (they still don't like Goths in these parts!), including some more recent additions. 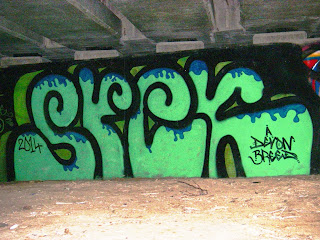 The urban nature of the river was also apparent in the quantity of trash including fridges and other bits of scrap metal, pallets, beer cans, bottles and plastic. 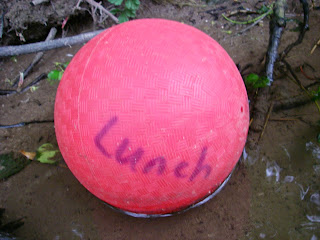 Err, not hungry thanks!

However, there were plenty of little jewels to be tempted out of their hiding places in the deeper pools, undercuts and tree roots. 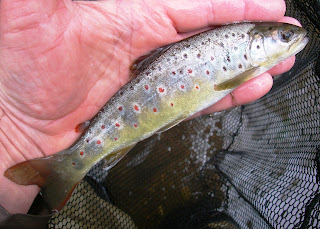 Diamond in the rough

Whilst I didn't hook or hang on to every one, it was particularly satisfying to pitch the fly up into different spots thinking "there's bound to be one in there" and get rewarded with a rattle on the rod top as they took it on the drop. It was with that thought in mind that I catapulted the nymph into a little run from behind the cover of an old kitchen sink that had been embedded in the bank by a previous flood. 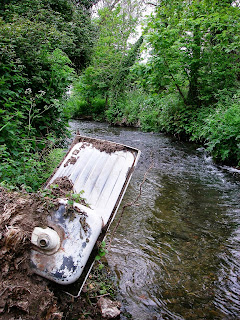 Saw the leader twitch forwards as the fly drifted back towards me and lifted into a good fish that momentarily slack-lined me as it charged off downstream. Quickly regained contact and, after a short but "proper" fight in the tight confines of the tree-lined channel, was soon looking at the best fish of the morning. 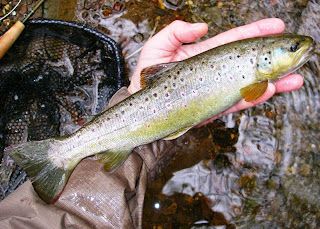 Had got well up into the town by now and as the morning had worn on more dog walkers and pedestrians had appeared on the footpath next to the river. Therefore took this as a cue to call it a day. Had landed 9 fish in all and hadn't had to share the river with anybody else apart from a pair of dippers and a couple of ducks. Headed back to the bungalow for a late and well-needed breakfast.
Posted by Toodle No comments: