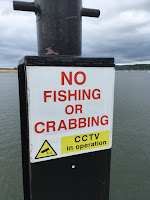 Unfortunately I didn't get out with the fly rod again due a combination of work, the weather and a long list of house improvements. However, a couple of impromptu weekends away gave me the opportunity to dust off the LRF gear and have a few sessions chasing mini-species again, albeit with mixed results.

At the start of June the wife and I headed down to Falmouth to visit the boy, stopping off for the night in Exmouth to catch up with friends on the way. Early the following morning and despite a few drinks the night before I headed down to the docks with Simon and his lad Daniel only to find a proliferation of new "no fishing signs" in our usual spots. 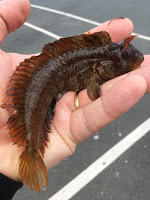 The previous owner of the docks had turned a blind eye to fishing provided you were sensible and left no litter behind and we'd actually been approached and spoken to by him in the past without knowing who he was. Sadly he passed away recently and it looked like the new owners were not going to be so tolerant. However, as there was nobody about and with the ferry still parked out in the estuary we risked dropping our rigs down the side of the dock wall into the "wrasse hole". Normally the bites would start as soon as the lead hit bottom. However, after five minutes we'd not had a single nibble between us.  Uncomfortable with having to look over our shoulders we therefore moved on to the next spot. 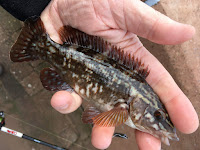 Bites were again inexplicably slow but we eventually tempted a funky tompot and a couple of small, pretty ballan wrasse from between the boulders. Our next stop at the normally productive boat ramp drew another head-scratching blank, so we headed over to the "compass" for a last throw of the dice. First cast I had another small wrasse. However, seconds later some council workers pulled up and turfed us off so they could jetwash the seagulll sh*t off the pavement.
It obviously wasn't going to be our morning! We therefore didn't put up much opposition when our other halves suggested meeting for a coffee instead. Packed up hoping that Exmouth will be back to its old self next time. 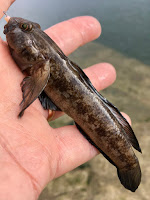 Later that morning we said our farewells and travelled on to Falmouth, which was in the middle of preparations for the G7 summit including the arrival of a Baltic cruise ship to house the 650 security staff required to police the event! Had a pleasant afternoon and evening with the lad and his girlfriend but early the following morning I was down on the Prince of Wales Pier, the departure point for the WWII raid on St Nazaire. Unfortunately things proved to be very hard going given the bright, sunny conditions and low, gin-clear water. A couple of hours later I made my way back to the Air BnB with just a couple of ballan wrasse and a black goby to show for my efforts, tempted into snatching a "Gulp" fish fry dangled in front of them.

Final trip was down to Wales to the in-laws, primarily for Father's Day, but with permission already secured from the wife for an early morning LRF session! Taking account of the tide and wind direction it looked like Hobbs Point was going to be the best option. Arrived just after low water and carefully made my way down the old car ramp. Lowering my dropshot rig baited with "Gulp" angleworm straight off the end I had a bite straight away from a stunning, little male corkwing wrasse - more Mediterranean than Milford Haven. 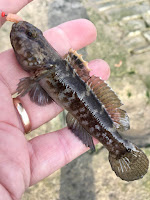 Spent the next hour or so of slack water exploring the weedy fringes of the ramp, adding some tiny pollock, a female corkwing and a shanny. Casting out a bit further onto the mud resulted in a couple of black gobies before the incoming tide pushed me higher up the wall and into rock goby territory. The little beggars soon put in an appearance, apparently pushing everything else out of the way as I had 19 of them before deciding to call it a day. Had been nice to finally see the coast again and to catch a few "minis". I should be back in Wales in July (if if the Delta variant and Mr Drakeford allows) for a more concerted effort. In the meantime I'll be dusting off the trotting gear and heading out on my local rivers. Tight lines!
Posted by Toodle No comments: