A rare weekend outing, but thought I'd make the best of the mild weather and got a pass out for the afternoon. Headed for Borrowash, the scene of my  recent perch brace. Had a bit of suprise when I got there. The carpark was unlocked, but completely devoid of any other anglers. Was therefore able to stroll down at leisure knowing that the area I wanted to fish would be free. Had changed a lot in appearance since last time. All of the Himalyan Balsam had either died down or been eaten by the sheep, so the banks seemed very open, but could still see the weed beds in the margins. Set up in the usual spot, which turned out to be a good thing in one respect. Saw something glinting in the silt and pulled out a pair of my glasses that I must have dropped last session! Bit brown with algae, but otherwise fine. 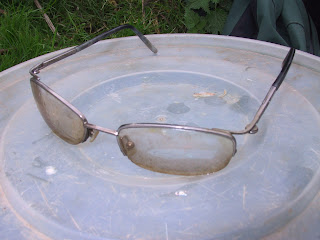 Result!
The strong, gusty (but warm) upstream wind played hell with the float rod, but luckily the bleak didn't seem to mind my rubbish presentation and I soon had a few in the bucket. Expecting things to be a bit slower, I forced myself to put the float rod away and set up two paternosters. Had two finnicky, dropped takes on each rod before I had my first proper take. Turned out to be a perch of 1lb 15oz, possibly a recapture as I've had three near this weight out of the same swim. 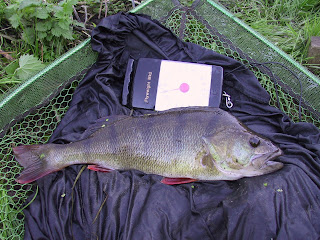 Familiar?﻿
Went a bit quiet after this, so the next take came out of the blue and made me jump! Wound down to feel something solid on the end that took off at a rate of knots downstream. After a bit of tussle (during which I was praying for the other rod not to go off!), I had a long, lean pike of 11lb 8oz in the net. 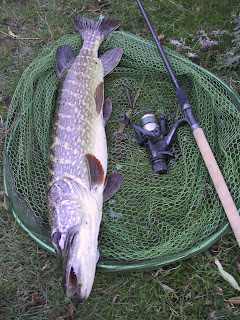 Lean and mean
Two greedy little perch of about 3/4 lb followed before it got dark. Suspect it won't be too long now before the weed dies down and the big perch go off to their winter haunts.
Posted by Toodle No comments:

Met up with Tim again for a late afternoon/evening session on the Trent and Mersey Canal near Burton upon Trent for another bash at the zander. Arrived to find that we'd been beaten to the "prime" peg opposite the marina entrance by a matter of minutes by a husband and wife team, so dropped in a bit further up, trying our best to avoid the huge piles of dog eggs littering the towpath. Soon had various deadbaits positioned upstream and downstream. Tim got out his whip and his bread punch and was soon doing a passable imitation of a matchman, pulling out some clonking roach from the very first trot down. The deadbait rods, however, remained silent. Had to do the "zander hokey-cokey" a few times for passing barges. The last one was a hire boat that came in diagonally through our swims and pulled up just the other side of Tim, whereupon a chap jumped off and started hammering mooring pegs into the bank. Don't you just love 'em?! Saw matey down at the marina peg catch a couple of decent pike, but it wasn't until it was fully dark that we had our first fish in the net, a perch of about a pound to Tim (yet another one on deadbait). At about 7 o'clock the crew from the hire boat decided to go for tea at the pub and just as they walked past my left hand rod the alarm stuttered into life. Was quickly onto it and felt a reasonable fish kicking on the end. Turned out to be our target species and just as Tim was netting it my other rod shot off. Hit that one as well and soon had another, smaller zander in the net alongside the first. 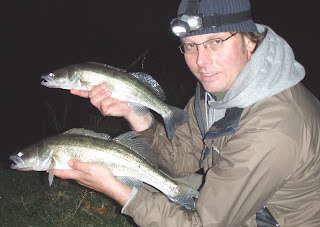 Quick fire brace
Got the rods back out quickly hoping that was a sign that the zander were on the prowl, but it went quiet again. The only other action was a pike of about 6lb to Tim. He seems to be developing a relationship with this fish, recognisable by a distinctive sore on one flank, as he has managed to catch it now on three different trips from three different spots! At 8.30 pm, having had no further indications, we packed up and walked back to the car through the dog egg minefield. Unfortunately, a strange smell in the car and a quick check when I got home revealed that I hadn't emerge unscathed!
Posted by Toodle 1 comment:

Had intended to go for a perch session on the Derwent. However, it was the colour of chocolate when I dropped in at Borrowash, so it was a quick 10 mile trip over the other side of the M1 to the River Soar at Kegworth instead. Had just started to walk up to the top of the section when I happened to glance downstream. There was quite a bit of fish activity on the bottom meadow and time was ticking on, so I turned around and down headed there instead. Set up in a nice little bay with a willow downstream and a bed of "whips" upstream. First trot down with the float rod saw a roach on, which was quickly transferred to the paternoster rod. This was placed just off the willow. Carried on trotting and was soon catching roach and perch, most of which were too large to comfortably use as bait. Wasn't long before the paternoster rod was away, resulting in a feisty little jack. 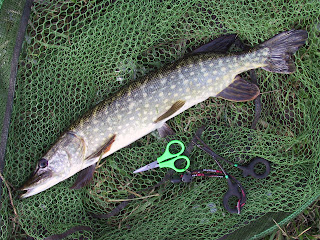 Pikey
A new bait dropped into the same spot saw a rapid take from another small pike that looked me in the eye and then spat a very mangled roach back at me. Third cast and it was away again. Pike! This one stayed on, but tail-walked straight into the bank and had to be extricated from the vegetation. Bites on the float rod had not suprisingly dried up by now, so I moved upstream and re-positioned the paternoster alongside the reed bed. Again, it was only in a few minutes before it was away, resulting in.......yet another pike. Had one bait left by now, which was put back into the same area. It had just started to get dark when the bobbin dropped off. I've caught enough perch using braid now to know when I've got a decent one on. This was such a time. Unfortunately, I never got to see it as it came off! "Oh dear!" or words to that effect. Again, the pike were good fun on the light gear, but it was annoying to lose that fish. Worth another go.
Posted by Toodle No comments:

Headed down to Saunton, North Devon last weekend with the lads for our bi-annual surfing trip. Unfortunately, the same miserable conditions that knocked the surfing on the head also ruined any chance I might have had of catching a bass this time. Had arranged to meet up with Joel Squires, aka "Joel Soul", on the Sunday for another lure session. Joel was optimistic and things looked good as we walked out to the rock mark near Woolacombe in the first light. However, after waiting patiently for the tide to recede and allow us down onto the rocks, we only had a few casts before the rising swell forced us off again. A trip to a different mark on the north coast in the afternoon saw better conditions early on, but the swell, the wind (and two lost plugs!) again proved too much. Thanks to Joel for trying. It'll be third time lucky I'm sure. 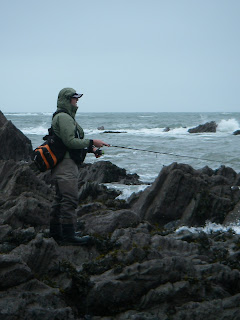 Plugging away
Posted by Toodle No comments:

Met up with Tim again for another evening bash at the zander on the Trent and Mersey Canal. In contrast to the tree-lined section at Stretton, the spot we were fishing this time was pretty featureless apart from the marina entrance directly in front of us. When we arrived there was a clear difference in the water clarity in the marina and in the canal, visible in the photograph below. ﻿ 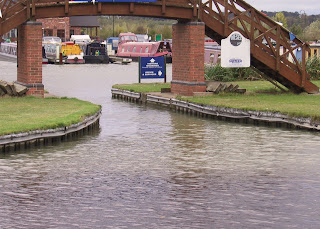 Hotspot?
﻿
﻿
I set up to the left of the entrance and Tim to the right. The boat traffic had near enough died down to nothing, so we were able to put a rod each into the entrance itself and another slightly to the side. I stuck to deadbait sections on a hair rig with a size 6 single, whilst Tim fished whole, lip-hooked baits. My deadbaits had been in literally 5 minutes when the rod up the channel signalled a take, resulting in a small zander. Just as I'd returned it the left hand rod was away. This time it was decent perch with a liking for a bleak tail section. 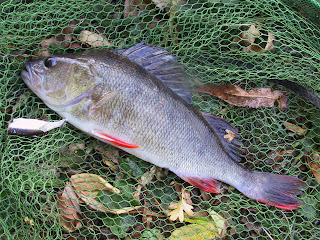 Stripey - the deadbait is to the left
A couple of missed runs followed, then it was quiet until about 6.45 pm. Over the next 15 minutes we had 6 runs, resulting in five zander. My first was my largest from the canal so far, whilst the second one was the smallest and had a pike hot on its heels as I drew him into the bank! 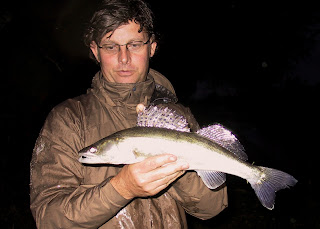 Getting bigger
Tim had three in quick succession, including the biggest of the night at about 3lb. 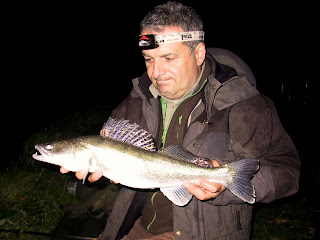 Best so far
By this time it was fully dark and, as the wind dropped, we could see that the area in front of us was absolutely packed with silver fish, the surface of the canal erupting periodically as unseen predators piled into them. With so much fresh food in the larder, the action on the deadbaits slowed right down, with only a handful of runs over the next two hours. Tim was unlucky to lose what looked to be a very good fish when his trace failed near the hook (no comment, mate!). A zander finally came to my rod at 9 pm giving us hope that we'd be in for a late flurry, but with nothing else subsequently happening we were packed and away at 9.30. ﻿
﻿
﻿
﻿
Posted by Toodle No comments:

A quick trip with the lure rod and some "rubbers" after work. Headed up to the main weir, but found the river to be painfully low and clear. It was interesting to see all of the normally unseen debris in the weir pool, including a section of metal railings and the fence post I snapped a rod on earlier in the year! However, failed to tempt or even spot a single fish. Therefore moved downstream and bumped a crayfish along the face of the side weir off the canal where there was a bit more depth and flow. Second cast I had a solid take off a perch that put up a good scrap in the current. 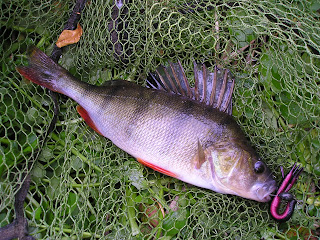 Crayfish muncher
Worked downstream, bumped a couple of fish and had another perch follow the lure. Tried to tempt a chub from one of the side channels, but nothing doing, so I headed for the lock. Bumped a fish first cast down the channel, then had another perch a few casts later. Tried a few more spots, but that was the sum total of the action. River looks really lacklustre at the moment. Dare I say it? We need rain!﻿
Posted by Toodle No comments: