Last day of the holiday and the first morning where low tide actually coincided with first light, so I was itching to have a session after the bass. However, the weather hadn't been brilliant the day before - cold, windy and wet - so when I drove down to the estuary at Lawrenny just before dawn I wasn't feeling 100% confident. Got there to find the wind funneling down the inlet, pushing waves up against the incoming tide and rocking the boats on their moorings. 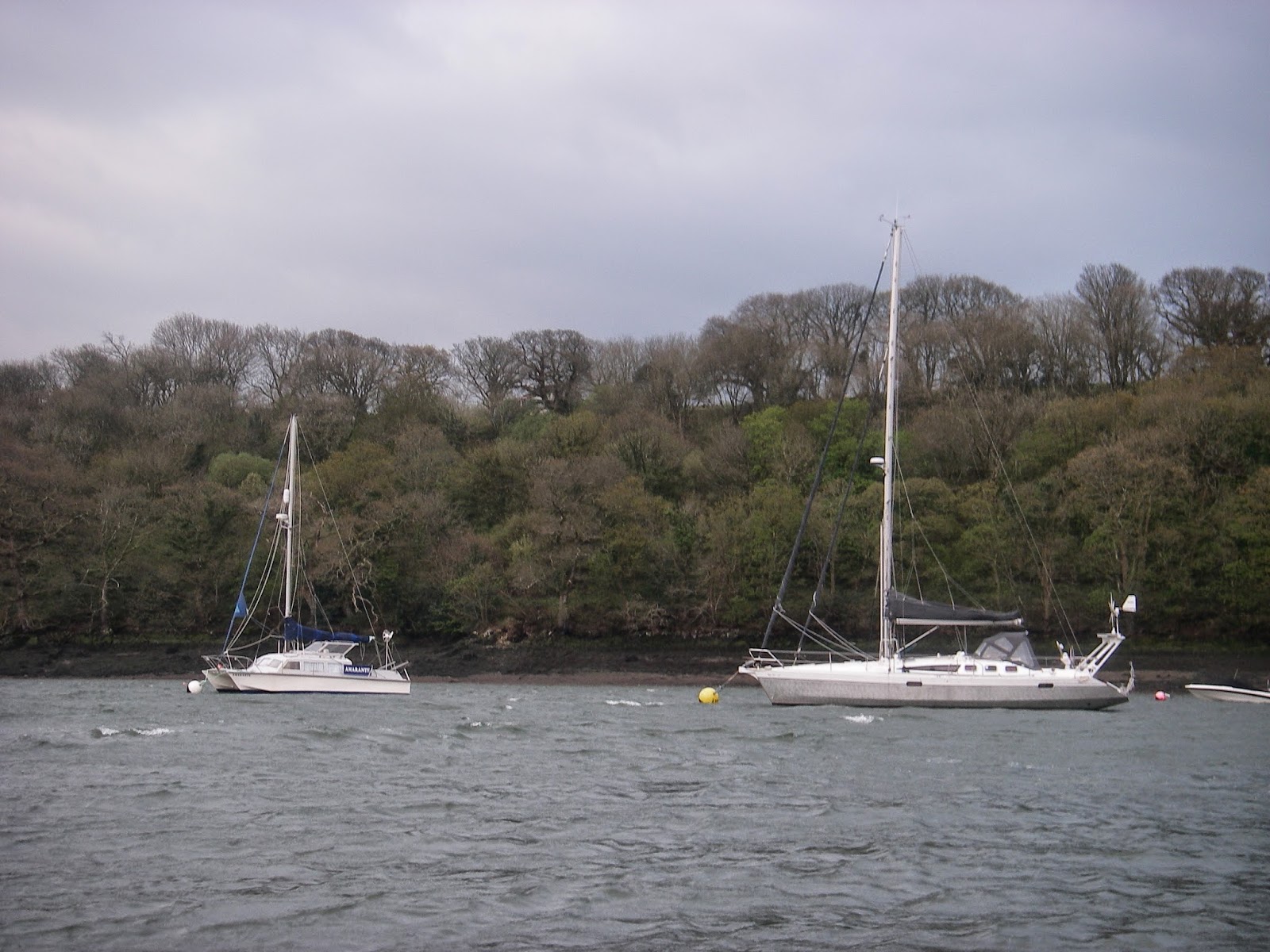 The wave action on the shore had caused the water to colour up slightly, so I swapped my usual Megabass X-120 for its bigger, brighter brother - an X-140 in pearl rainbow. Had been casting away for about an hour, getting less and less confident, when the tip went 'round out of the blue. Just a schoolie, but very welcome. 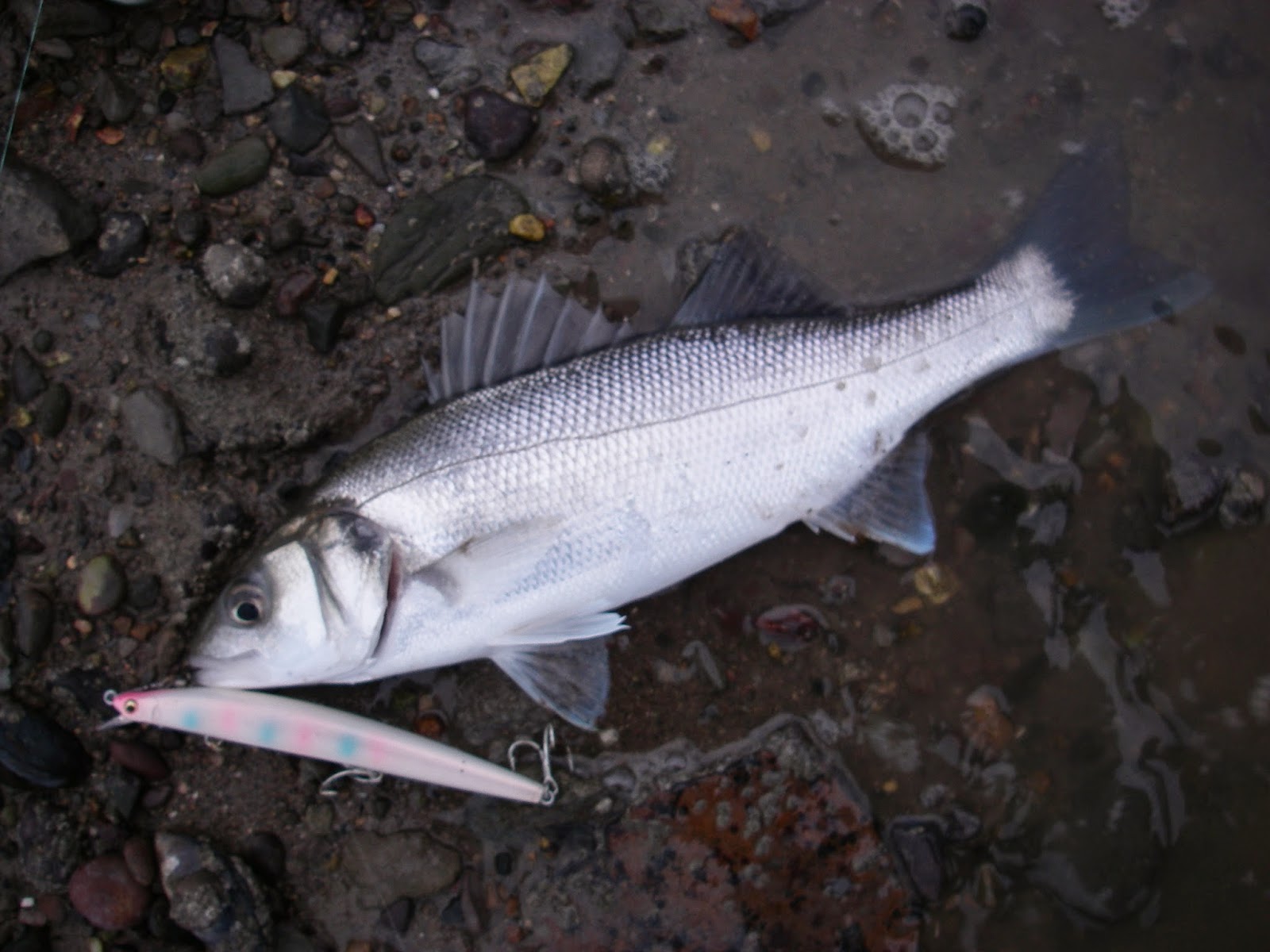 Carried on with renewed enthusiasm and a few casts later hooked a fish that took off like a scalded cat, making several runs and taking line off the clutch before I got it under control. The reason soon became apparent when I got it in the shallows - a grey mullet hooked firmly in the tail! 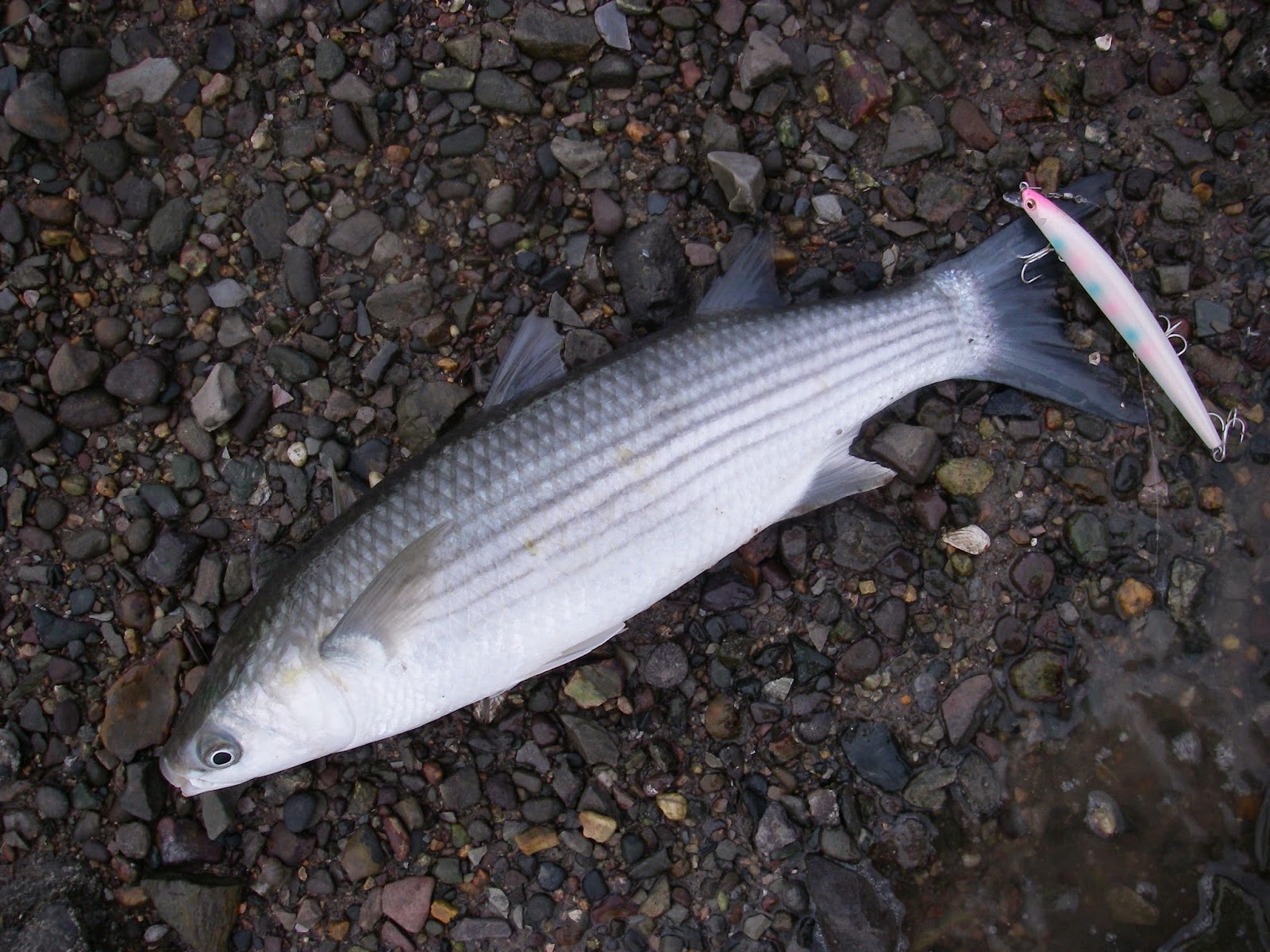 Not quite a first!

There had been a few showing - some jumping clean out of the water - so there were obviously a few around. However, I've got plans for these chaps in the summer, so wasn't too disappointed that my first mullet on the bank didn't really count. By this time the margins had really started to colour up as the tide pushed up the muddy shore, but I decided to stick it out a bit longer. Moved up the shore slightly and tried a few casts along the boundary between coloured and clearer water. 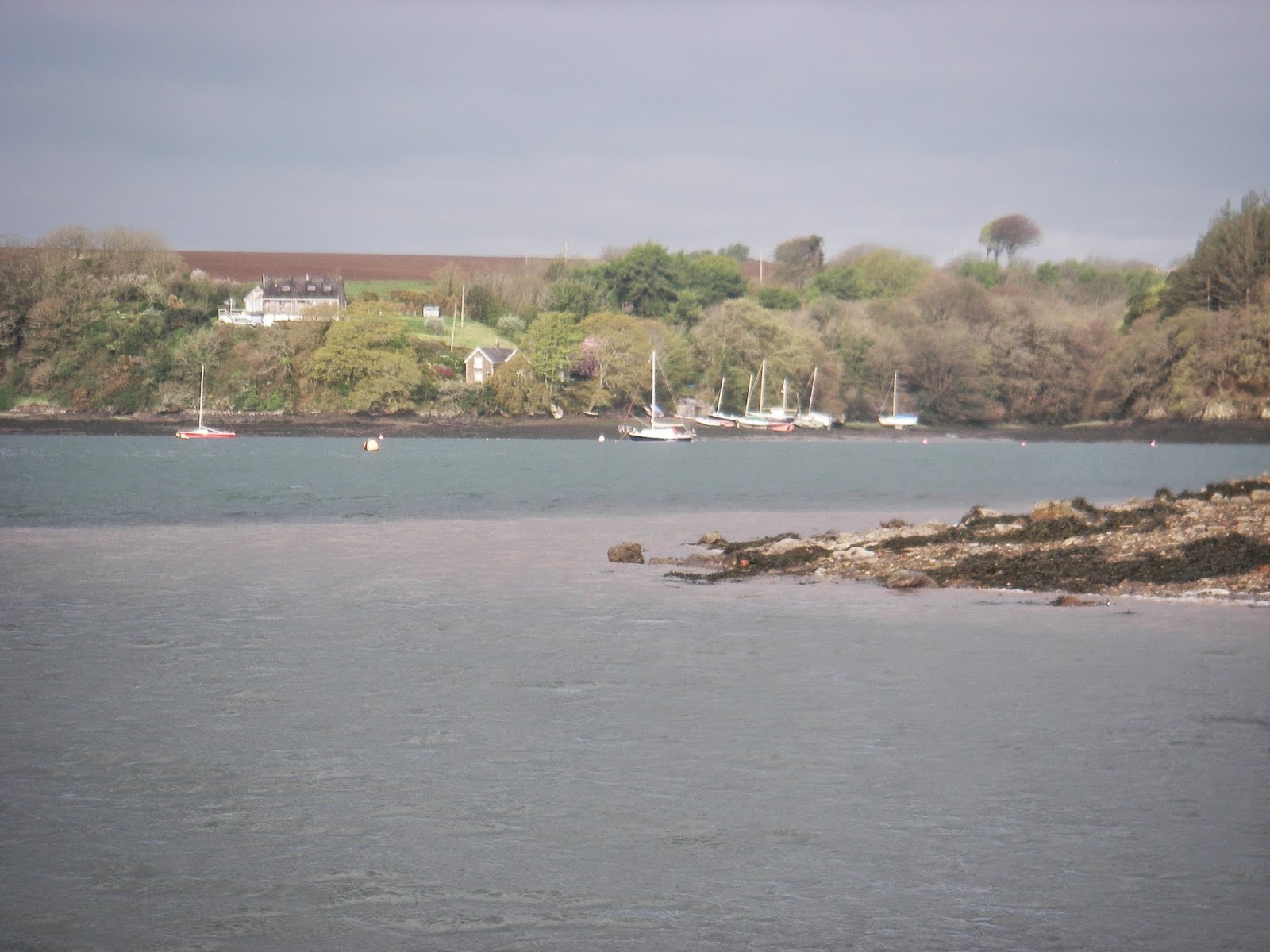 Was rewarded with another clonk on the rod tip and another schoolie. 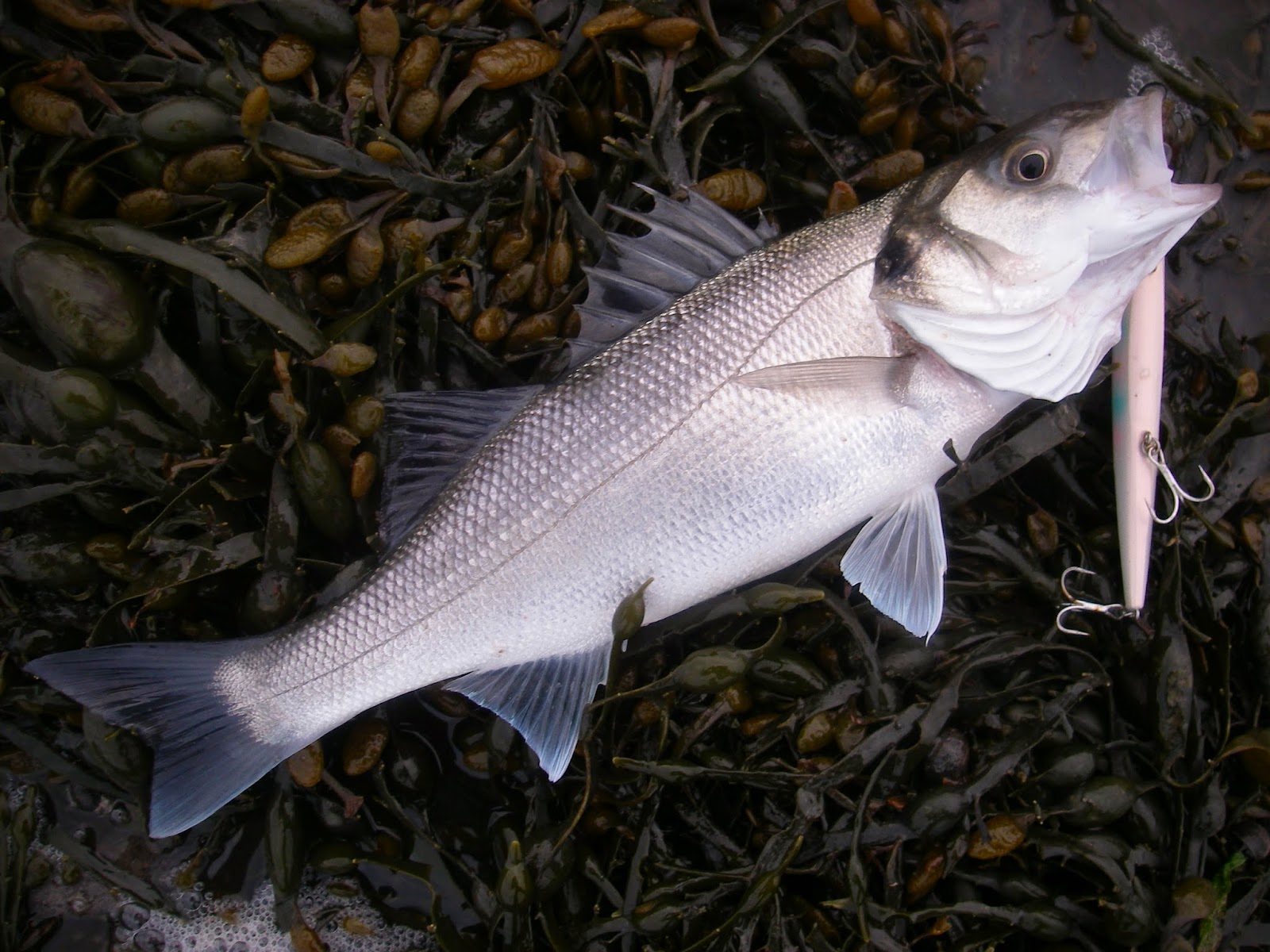 Had a few casts around the corner in the relative calm of the main estuary, but without any further success, so called it a day and headed home for breakfast.
Posted by Toodle No comments:

Tried a different section of river today that I'd found on Google Earth, this time several miles upstream of where I was previously and therefore quite different in nature - a faster, shallower channel hemmed in between a steep wooded bank and the site of an old trout farm, with the only access by wading down the river itself from a ford upstream. 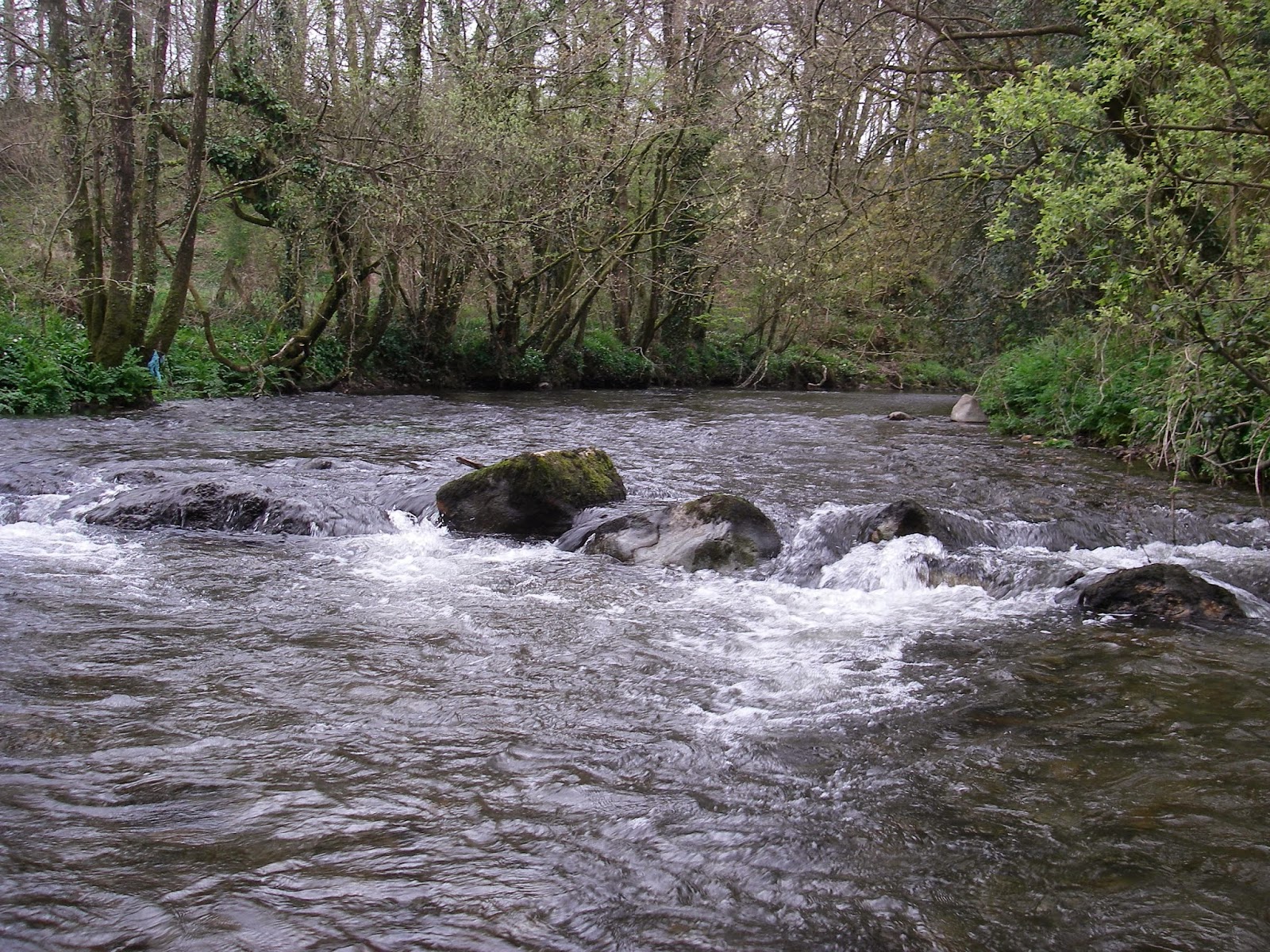 Fished the pockets and the deeper, steadier sections with same team of flies as before. First fish was an 8", solid bar of silver that spent more time in the air than the water. Unfortunately it wriggled out of my grasp before I got a photo, so I was left guessing whether I'd caught my second ever sewin, or my first ever salmon. Was spotties after that, including best fish of the holiday so far that punched well above its weight in the fast current. 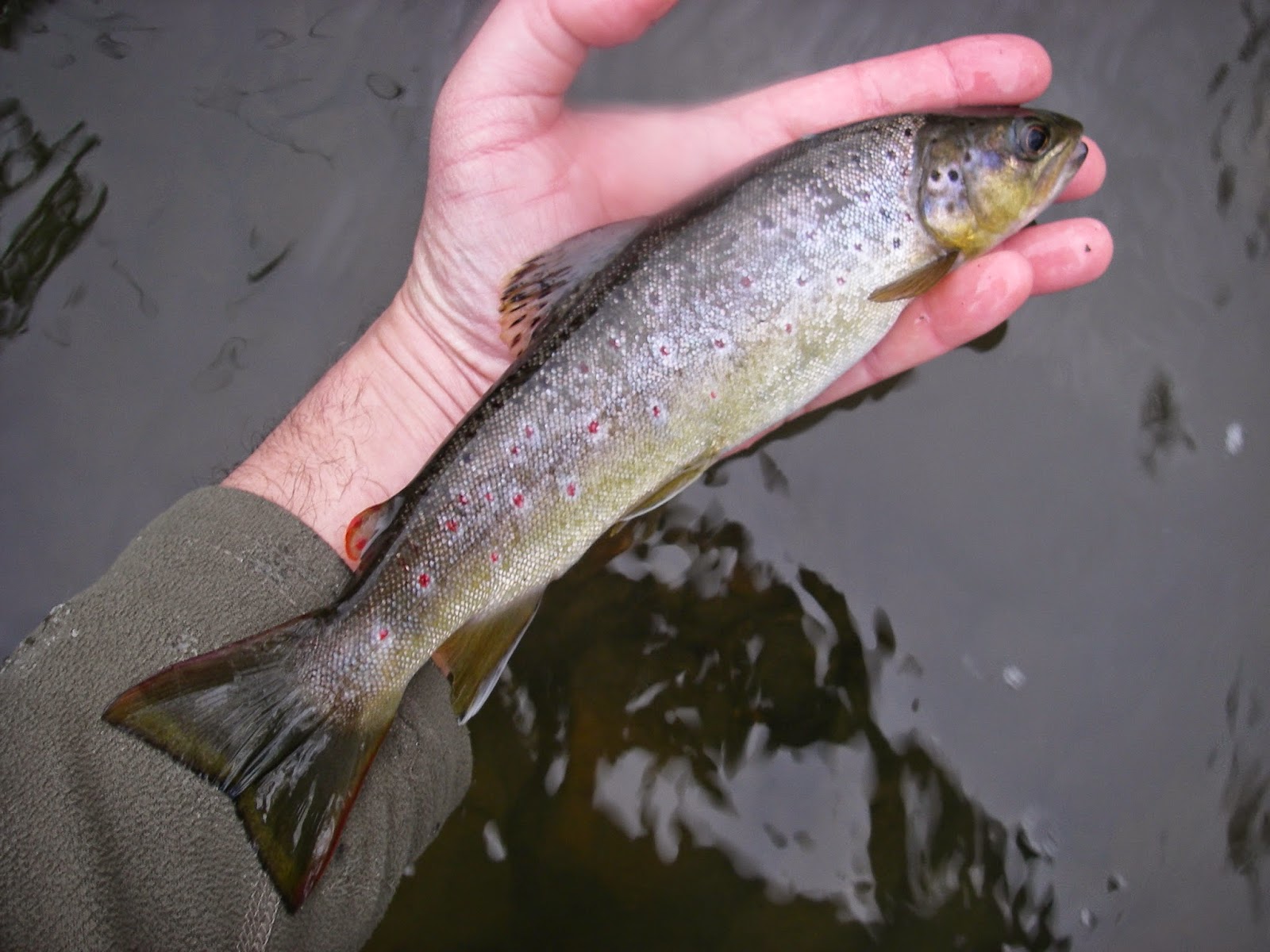 Again it was the goldhead GRHE on the point that took the honours, with just a single fish coming on the top dropper. 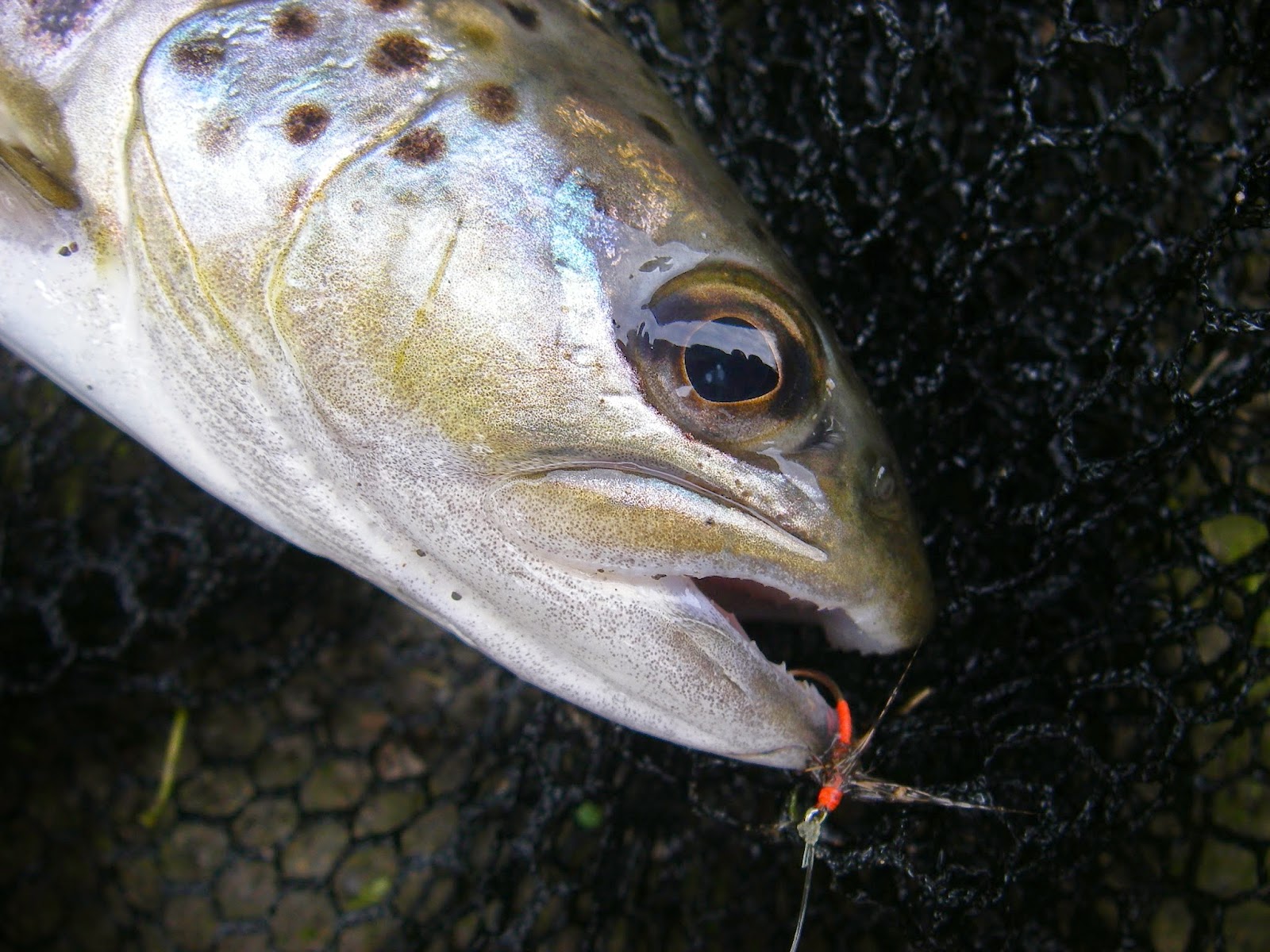 One on the Partridge

There was some good news when I got back to the house - Angus had decided that he'd had enough of being hungry and mobbed by crows, buzzards and squirrels and had allowed Alex and and his wife, Emma, to finally catch him after four days on the run. 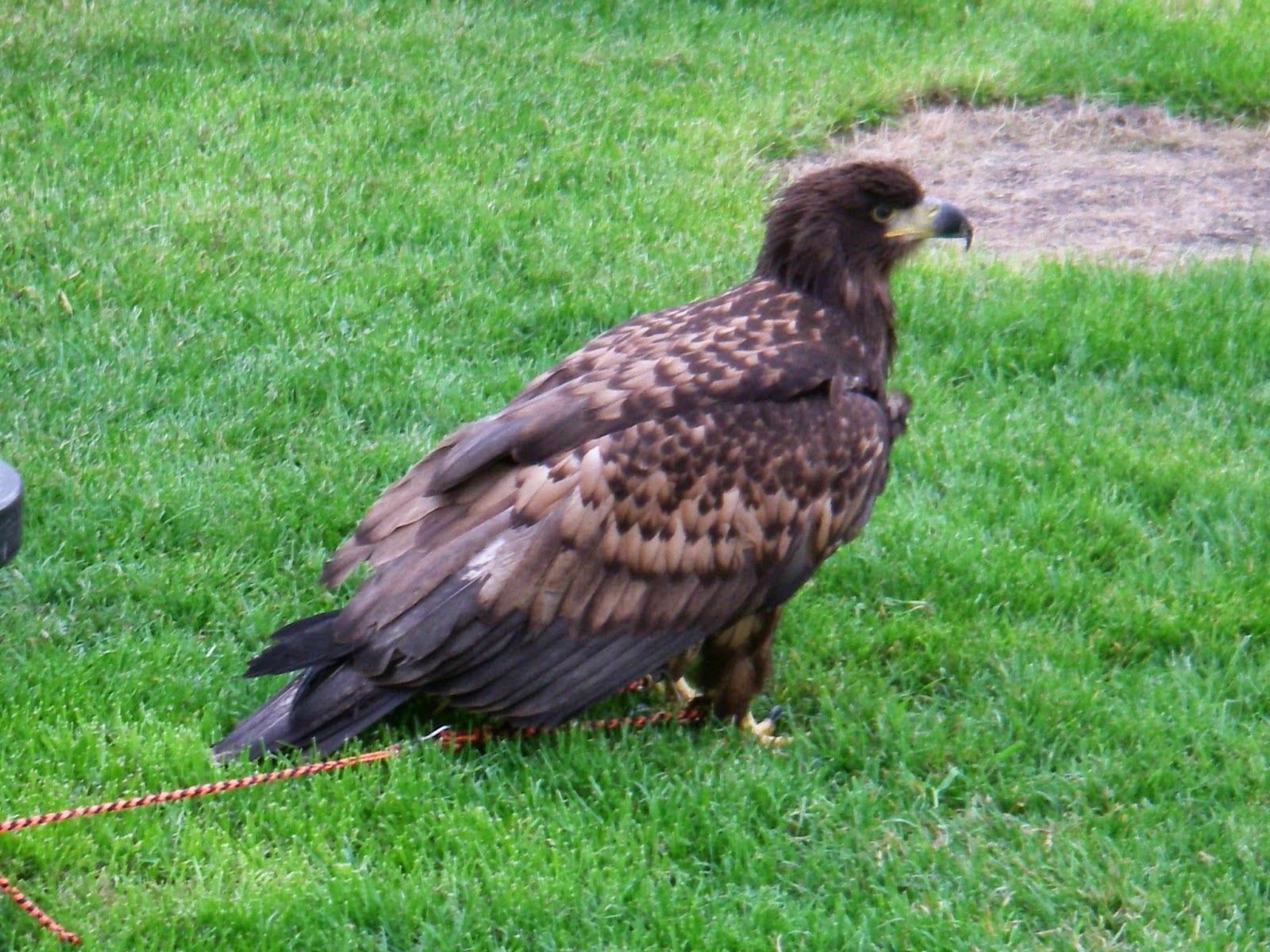 The wanderer has returned!

Found him safely installed on the lawn looking like butter wouldn't melt in his mouth, but then again who'd argue with him?!
Posted by Toodle No comments:

Packed the trout and bass gear for our latest trip down to the in-laws in Pembrokeshire. Was particularly looking forward to catching a few Welsh Brownies again. Often used to pop down to the local river with the fly rod but, for one reason or another, had just got out of the habit. However, first job was to assist with "Operation Angus"! My brother-in-law, Alex, had recently purchased an immature White-tailed Sea Eagle for his falconry business and was in the process of training him to fly to the glove, but on his second free flight he decided to go AWOL. Fortunately he had a radio transmitter on, so the majority of our first day was spent helping to track and keep an eye on him until he was in the mood to come home. By late afternoon he seemed to have settled down on the roof of a barn at a local farm, so we left Alex to babysit him and await reinforcements. Took the opportunity for a quick trip down to a free section of river I'd fished regularly in the past - about 400 metres of nice riffly water sandwiched between a high wall alongside a road and some private gardens. 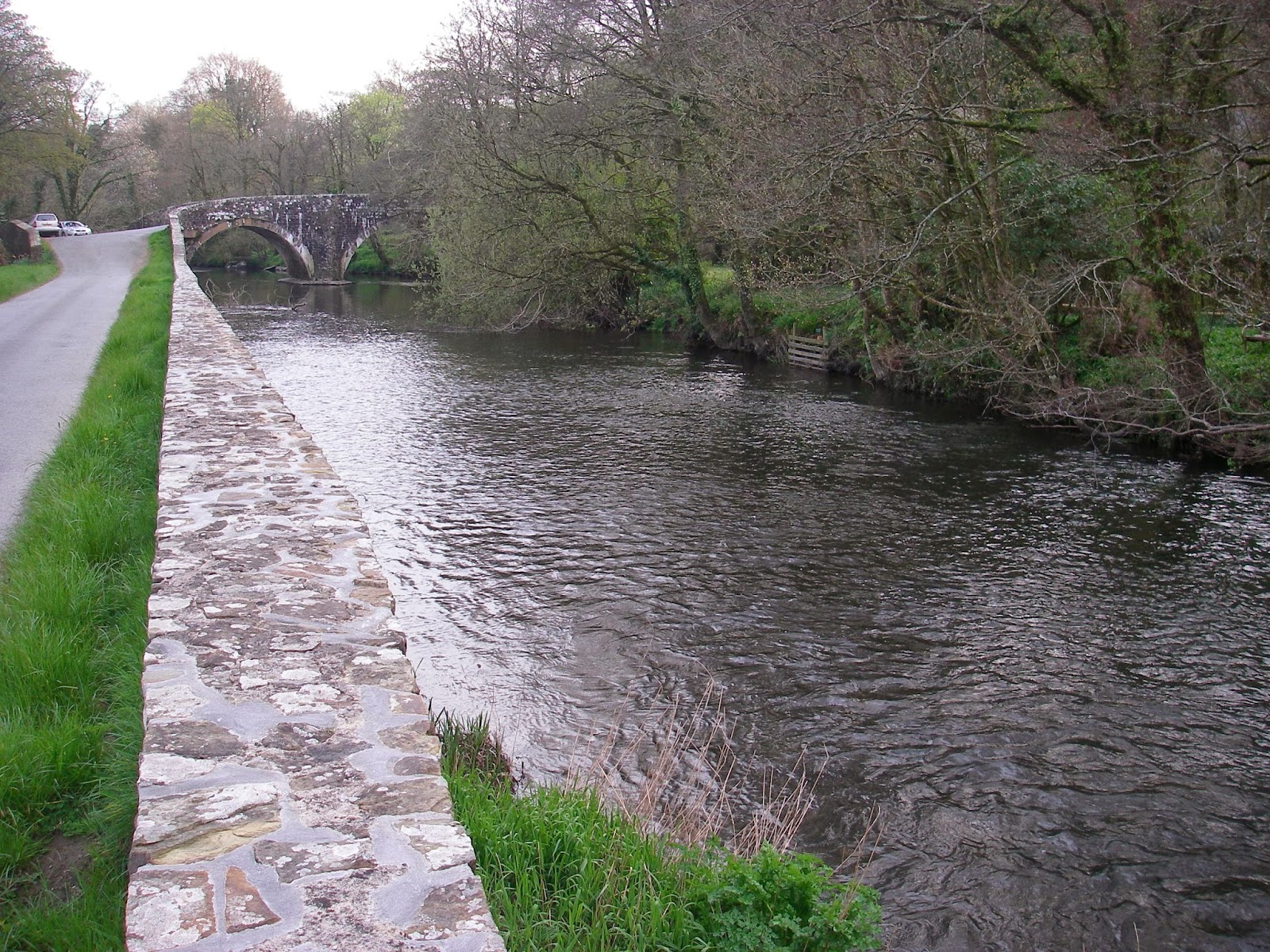 There wasn't much in the way of fly life visible when I got there (it had been sunny, but with a cold breeze all day), so set up a cast of three wet flies consisting of a gold head GRHE on the point, a Greenwell's Glory on the bottom dropper and a Partridge and Orange on the top, all size 14. Waded in at the top of the section, aiming to run the flies down the line of trees on the far bank, and had a take second cast from a little Welsh Brownie that scrapped in the current all the way to the net. 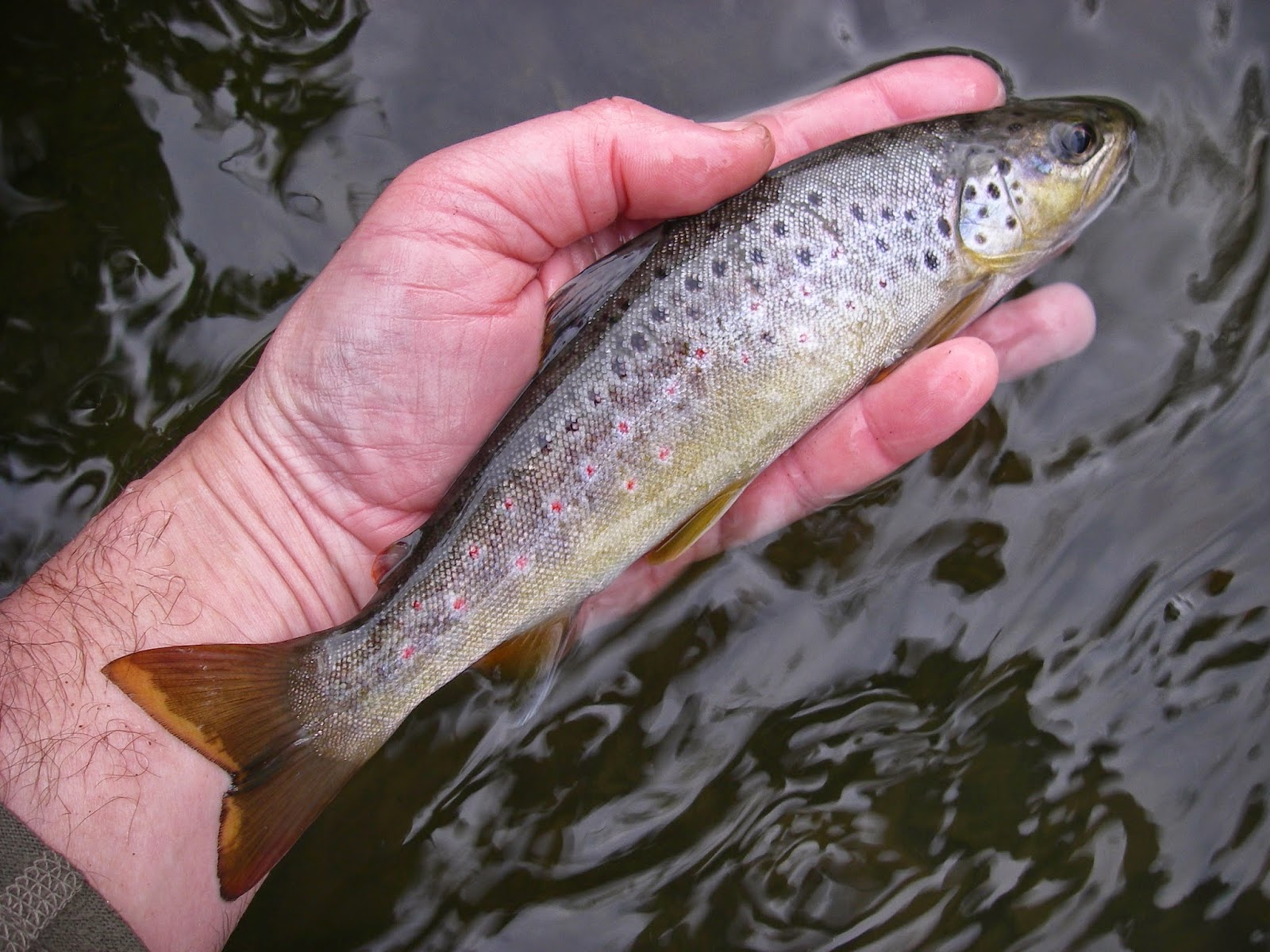 Fished on slowly downstream for an hour or so taking eight more as I did so, including a "double shot" on the point fly and bottom dropper. 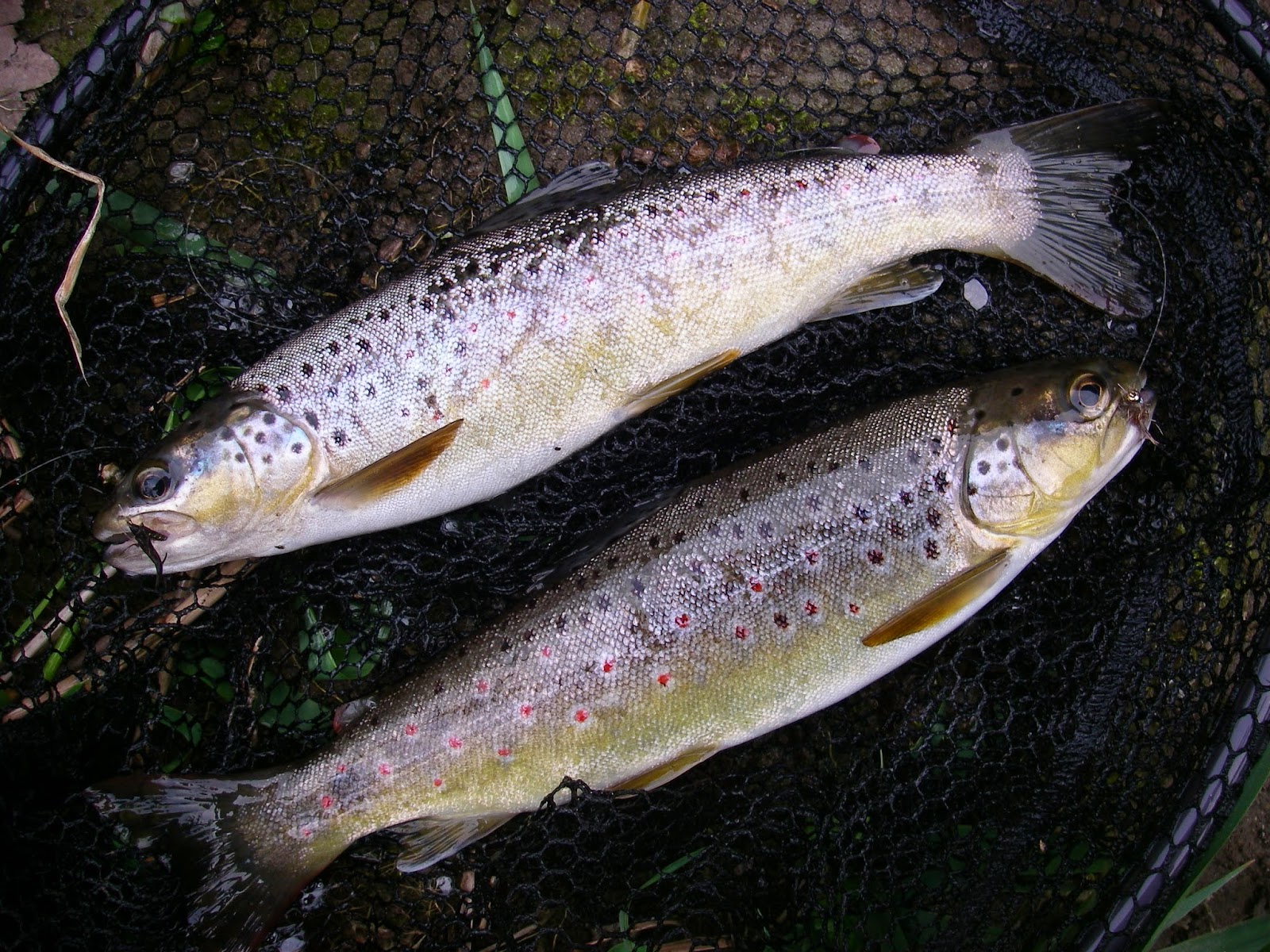 Caught on all three flies, with the gold head marginally taking the honours. Didn't quite make it down to the bridge as a chap and his lad appeared and started casting from the wall just downstream of me. That's the trouble - "free" sections of river in this neck of the woods don't stay free for long! Called it a day at that point, but was pleased with my first recce.
Posted by Toodle No comments: