Considering I live in the Midlands, I've had lots of opportunities this summer to indulge in a bit of sea fishing, particularly light rock and light game fishing for the smaller species. 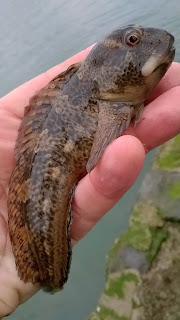 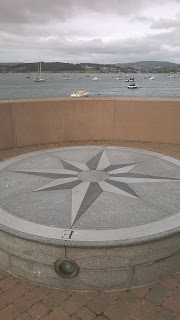 The August Bank Holiday saw us down in Pembrokeshire again. However, the fishing didn't go entirely to plan as I had a blank for the bass and then again for the trigger fish. However, I did find a spot where I caught some donkey-sized shannies that will come in useful for next year's species hunt.

This weekend we were down in the South West again, but this time in Exmouth visiting friends. Saturday morning saw the lads and dads heading down to the docks for high tide armed with a pack of fresh rag. Unfortunately, ongoing works to the slipway and a residential development meant that access was quite limited. However, we found a spot near the compass where we could fish over the wall into a large slack next to some rocks. 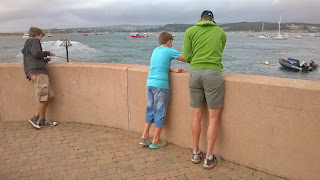 My friend Simon had brought his kayak rod, so I set him and his lad, Daniel, up with a two hook flapper rig baited with whole rag on size 4 Aberdeens for the "big" stuff, whilst my lad, James, and I fished with scaled down scratching rigs baited with scraps of rag on our LRF rods. Simon was quick out the blocks with a couple of small ballan wrasse before I'd even got the other rods set up. 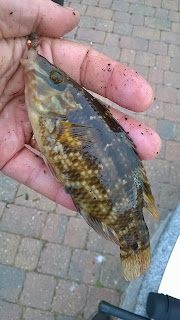 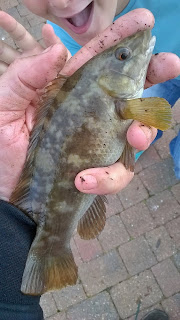 With the other baits in the water we soon started picking up more ballans, along with the occasional male corkwing wrasse, James getting a "triple shot" at one stage! Despite being the only fishable spot, it soon became apparent that there were loads of fish about and, whilst we were fishing over rocks, they were flat and relatively snag-free. Along with the wrasse there were lots of small pollock to keep me busy unhooking fish, re-baiting hooks and tying new rigs for everybody else - deja vu! We weren't the only "fishermen" in attendance either - the local seal popped up a couple of times and there a couple of cormorants fishing off the little beach in front of the apartments. 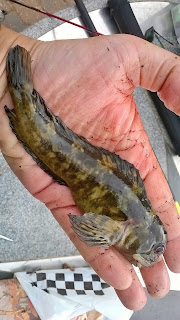 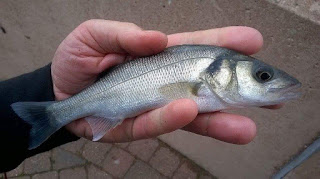 As the tide started to ebb, the bites from the wrasse seemed to dry up and, whilst Simon got a bonus little bass, it was the shannies that moved in instead. James started bringing them up two at a time and Daniel caught some real "donkeys" by sight-fishing for them in the shallower water. However, I was holding out for either a scorpion or my first tompot blenny, both of which had featured in various Googled write-ups about the venue. Just as we were thinking of packing up, I had a determined rattle on the rod tip and as I wound the fish to the surface I realised I'd added to the species list after all. 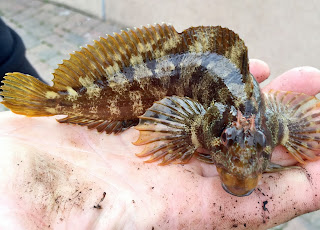 Bizarrely, next and last drop down I had another, so I was quite chuffed when we headed home for a well-deserved sausage bap! 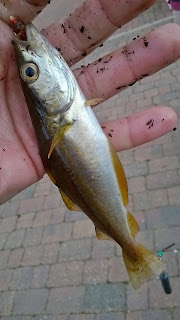 Simon and Daniel had rugby training on Sunday morning, so it was was just James and I that headed back down to "compass point" for high tide again to use up the last of the rag. Unfortunately, I'd not checked it before we left. Upon unwrapping the newspaper, it was obvious it hadn't fared well in the utility room overnight, i.e. it was dead and well on the way to decomposition! However, whilst this made the baiting up process not particularly pleasant, it didn't seem to put the fish off at all as we picked up where we left off the day before. The juvenile pollock appeared first before James found a spot in between two rocks that yielded a number of ballan and corkwing wrasse and a couple of bass. The fishing followed the same pattern as the previous day, with the shannies becoming more prevalent as the tide turned. James added a tompot to his tally before I got smashed up by a much bigger fish that took the very last scrap of usable bait. Packed up at this stage and headed home after another successful session, but stinking of semi-rotten ragworm and very keen to wash our hands!
Posted by Toodle No comments: