Headed back to the River Trent near Swarkestone for another perch session. Initially made for same swim as last time, but with the plan to go roving and look for the fish, rather than just sit in the same spot and hope they came to me. Got the float rod going and was into bleak, roach and dace straight away. As I was setting up the paternoster rod there had been an explosion of silver fish in the weed bed to my right, so it wasn't a suprise that I didn't even get to set the bobbin after casting in. Pike this time, swiftly followed by another next cast in. 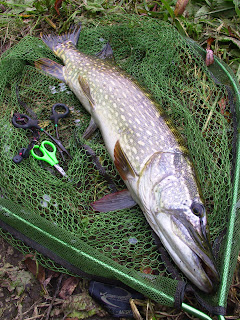 Not a perch!
These two had caused quite a bit of disturbance, so as soon as I had a few baits in the bucket I reluctantly packed away the float rod and moved downstream. No luck in the first spot, so dropped in between two willows. This time I had a take straight away from a small perch of about half a pound. Next cast in met with something different entirely! Struck into a heavy fish that ploughed around in the gap between the trees in front of me. At one stage everything went solid and I remembered a snag where I had lost a lure spinning there earlier in the year. Could still feel the fish so decided to be brave and give it good pull hoping that the weak leger link would break first. Everything went to plan. A decent perch rolled on the surface and was unceremoniously netted. Lifted it onto the bank to see the biggest perch I'd ever caught. A real battle scarred monster that went 3lb 10oz on the scales. 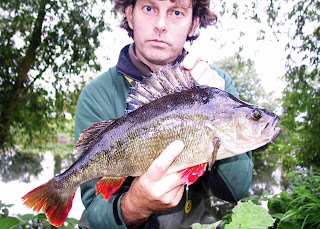 Crikey!
Took a couple of quick photos and popped it back. Didn't really care that the next one was another tiddler around the half pound mark. Was still on a high when I moved down to my final swim. Again I had a take soon after casting in. Was another good fish, but looked small in comparison with the 3lber, so was pleased when it went 2lb 8oz on the scales. Had recast and was about to take a quick photo when the bailiff arrived. Just as he asked "Any good?" the alarm sounded again and another decent fish was in the net, this time 2lb 4oz, so was able to get a brace shot. 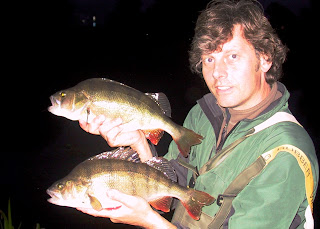 Double top
These two alone would have made my day, but the 3lber really was the icing on the cake. Happily relinquished my swim to the bailiff (he'd come down after a barbel) and set off home via the chippy.﻿
Posted by Toodle 7 comments:

Had to work at home as my son was sick, but it also presented an opportunity for a quick trip over to the Derwent in the evening. Was cold and blustery when I got there, so made the best use of the cover I could find. Meant standing in the river again, which I would regret later. Downstream wind made it tricky with the float rod and, unlike last time, the silver fish initially proved to be a bit thin on the ground. Eventually started getting some bites but (as seems to be the case when I’m struggling to catch bait!) they were from some quality roach and dace. However, the bleak finally arrived and I soon had a paternoster out down the side. Carried on catching on the float rod, but it wasn’t until much later that the perch rod came to life. Had four, stuttering runs in a very short period, just as it getting dark. Had one stolen bait and two fish that came off before finally landing one of about three quarters of a pound. Get the feeling there might a few of this size around. Was physically shaking with cold by now, so was glad to pack up. A bit of an anti-climax after the last week.


On a brighter note, it was good to see that the River Erewash has made it into the national angling press with an article by Lee Burden on chub fishing with slugs in October’s edition of Total Coarse Fishing. The river’s come a long way in the last few years due to improvements in water quality, with barbel and grayling also present now as a result of stocking by the Environment Agency. 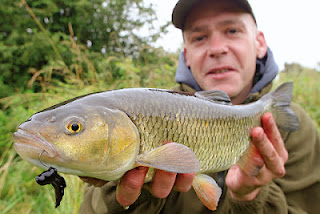 "Slug it out!"﻿
Posted by Toodle No comments:

Met up with Tim for a session on the River Trent near Swarkestone. Tim had expressed a desire to trot for roach, whilst I had perch in mind again. Arrived to find Tim already trotting away in the swim I'd directed him to. Set up next to him and we were soon both trotting down the same crease, me with maggots and Tim with hemp and tares. After a while it was apparent that, whilst I was probably bettering him for numbers, Tim's seed approach was certainly accounting for the better fish with some quality roach and dace falling to his rod. That wasn't really my game plan anyway so, as soon as there were a few suitable baits in the bucket, the perch rod went out along the side of the weed bed just downstream of us. Had not been in long when the tip was wrenched over and I connected with a decent stripey. Tim did the honours with the net, landing a fish that went a pleasing 2lb 6oz on the scales. 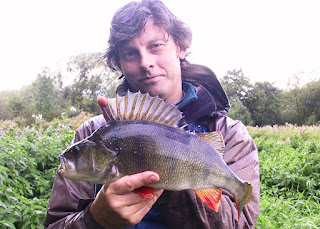 A quick snap in the rain and the rod was put out to the same place again. A few minutes later the process was repeated, but this time the resulting fish was a few ounces heavier at 2lb 10oz. 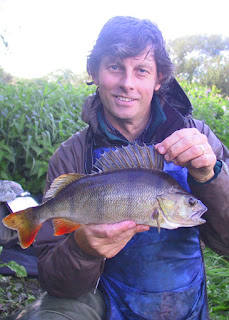 Even wetter, but still smiling.
Tim took the hint and got a perch rod out as well after this. However, whilst the action continued for both of us with several perch up to 1 lb plus, nothing matched the stamp of those first two fish.﻿ Great sport nonetheless with Tim continuing to catch on the float rod as well, switching between tares and caster on the hook for a mixed bag of bleak, roach, dace, chub, perch and the odd skimmer. With a couple of jacks thrown in for good measure it was a good indicator that the Trent is in pretty good nick as a fishery at the moment.
﻿
Posted by Toodle 3 comments:

I didn't think I would really write a whole summer off, but that's exactly what happened with work, holidays and a back injury all playing their part. The latter was the worst. You don't really realise how much you depend on your back until something goes wrong with it. Simple tasks like tying shoelaces are impossible. Apart from planned lure fishing for bass and wrasse in Wales, I'd been persuaded to come out retirement and do a triathlon (not done one since 2006) with my friend Simon. Needless to say, both went out of the window so I was not in the best frame of mind for most of July and August, a period my wife dubbed "the summer of misery"! However, by the start of September I'd improved (with the help of an excellent physio) to the extent that I thought about fishing again. First step on my rehabilitation was a trip to the Derwent after a big stripey. Had actually gone the week before to find the river dropping, but still too coloured for perch. Weather was cold and wet, but had a play with the float rod anyway and winkled out a few roach. By contrast, the river that greeted me this time was low and clear. That coupled with the bright, sunny conditions wasn't ideal either, so I headed for a section shaded by bankside trees. 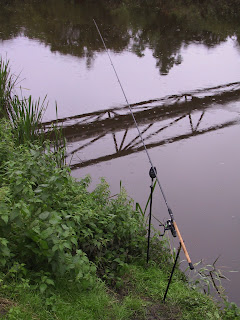 "Under the (pipe) bridge"

Soon had a float working down the crease about two rod lengths out and it wasn't long before the loose feed brought the silver fish on. The bleak arrived first in their droves, followed by the roach. A sprinkling of dace and a few chublets kept me busy until it was too dark to see the float. The perch rod had been out for the majority of this time. However, it wasn't until the last hour of daylight that it came alive. Four runs resulted in a stolen bait, a very mangled and very dead roach and two perch about three quarters of a pound each.

Left the river to the night shift, already planning the next step in my fishing rehabilitation.
Posted by Toodle No comments: