Long overdue session with my mate Dai on the River Dove at Doveridge. He moves in higher fishing circles than us mere mortals now but, on the plus side, he came bearing gifts in the shape of several bags of Sonubaits pellets and groundbait! Trotting for grayling was order of the day and we headed for an area where he'd had a few in the past. First couple of swims didn't yield anything, so we headed for the "banker". First trot down Dai had a nice fish of 1lb 8oz, followed by a smaller one next cast. 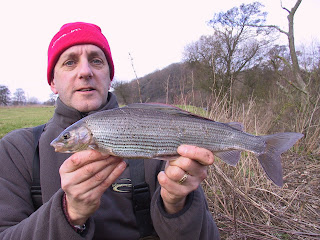 One the cormorants haven't eaten!

I dropped in below him and hooked a decent fish right at the bottom of the swim. Had brought it quite a long way upstream against the current and was thinking of manouvering it into some slacker water downstream of me when the hook pulled out! Oh well........or words to that effect! Tried a few more spots without any more success before ending up back where we started. Dai's luck was in as it was his float that disappeared again, this time resulting in a brownie of about 2lb with an obligatory cormorant beak mark across its back. 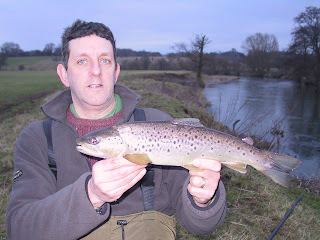 And one they tried to eat!

That was the end of the action for the day. Had been a bit of a grueller - 4 bites between us in 3 hours - but it was good to get out again and, to cap the afternoon off, we were treated to the sight of a Barn Owl flying along a hedgrow about 10 metres away. That's two species of owl in two fishing trips - what next?! 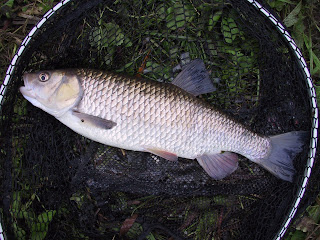 Rest of December just seemed to fizzle out in terms of the fishing. Spent most of Christmas in the kitchen or dozing on the couch after eating and drinking too much! New Year was a bit more of restrained affair down in Pembrokeshire at the in-laws. No fishing, but weather was good enough for us to be able to fly the hawks most days. 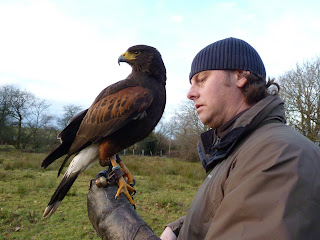 Who's a pretty boy? Not me obviously!

The birds have been busy on dawn patrol every morning at a local dairy farm keeping the starlings (thousands of 'em!) out of the feed bins. Not very exciting for them sat on a glove in the middle of a cold, draughty cow shed, so it was good to let them have a proper fly when they got home. 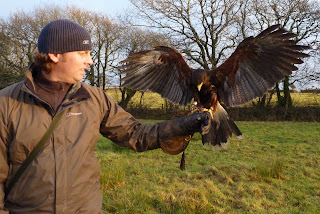 Zephyr comes to the glove

Even managed to fly the established male and the young female together for the first time. They got on together from the off, which was great to see. Hopefully they'll be fully fit and raring to go for holiday season (http://www.pembrokeshire-falconry.co.uk/).