When I suddenly lost my dad in 2018 it was people like my friend Stuart who helped me get back to normal, or as normal as I could be under the circumstances. In his case it was the simple suggestion that we should get out and go fishing. Not only did we catch a load of perch on a beautiful summer's evening, but we also had a good old chinwag, all of which went a long way to breaking me out of the rut I was in at the time. Recently Stuart has had to deal with his own loss - that of his mum and one of his best friends within weeks of each other. Having promised him ages ago to take him grayling fishing, it seemed appropriate to now return the favour, particularly as the river and weather conditions were looking ideal.

Thursday morning therefore saw us heading West on the A50 into Staffordshire and to the River Dove near Tutbury. The car park was empty when we got there, so we got togged up and had a leisurely walk upstream to the first swim, a long straight section where a riffle transitioned into a glide and then back into a riffle again. Previous trips had established that the grayling could be anywhere on the stretch, so we slid into the river at the upstream end and were soon running our matching 4BB Avons downstream as far as our age-impaired eyesight would let us. The bites were slow in coming, but when they did come we hooked into a fish simultaneously - a small chub for Stuart, whilst mine turned out to be our target species. 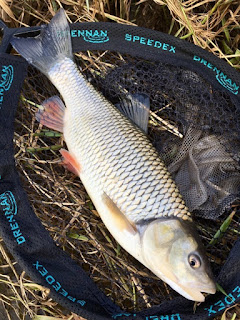 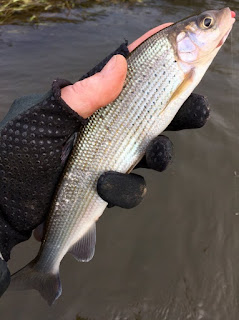 A switch from double to single maggot seemed to stimulate a bit more interest and I added a couple of chub between 2 - 3lb and a few more grayling to my own tally before I was flat-rodded and snapped off by a big fish that bolted into the sanctuary of the far bank trees before I could react. With Stuart struggling for bites I therefore suggested we move down into the deeper and steadier water of the glide. Unfortunately, I was first on the board again with another grayling and nice brownie that lead me a merry dance in the current and which left Stuart scratching his head about what he could possibly be doing differently. 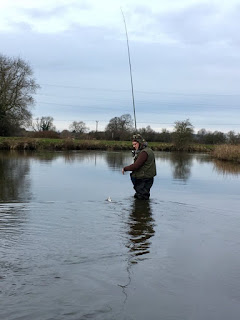 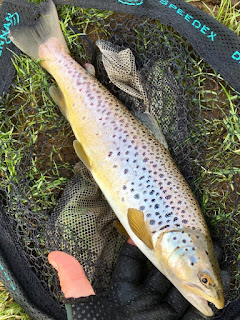 Having reached the bottom of the section with no further interest we paused and took stock with a sandwich and a cup of coffee. Thinking that the fish might be shoaled up after the recent cold snap and that we'd have a better chance if we found some deeper water, we headed upstream to a likely-looking glide. To be honest I'd had limited success here in the past, so I was mightily relieved when Stuart finally hooked his first grayling of the day. 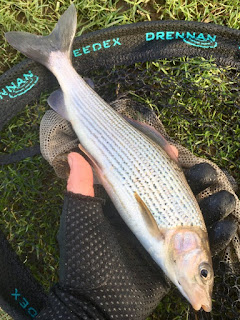 We were fishing with renewed enthusiasm now and were rewarded with a few more grayling to just over a pound. However, I had to curse my luck once again as I hooked what undoubtedly would have been the best grayling of the session only to have the hook pull after a few seconds, the first and only time it happened all day! By this time Stuart's dodgy knees had started complaining, so we decided to call it a day. When he tipped the remains of his maggots out of his bait apron into the river I noticed that weren't sinking. Turned out that his apron had filled with water while he was wading and we all know what happens when you add maggots to water - his loosefeed would have been five feet off the bottom! Not that he was really bothered, he'd just enjoyed being out and to catch a few fish had been a bonus. Felt even better when on the way back to the car we came across two other anglers fishing for chub on the tip who'd not had a sniff all day.

Rounded the day off with a quick pint in the Bridge Inn at Branston, a regular haunt of Stuart's when he lived in Lichfield and when they served Bass straight out of the barrel - flat as a pancake and to the top of the glass. However, much to his dismay, we found the now "Italian pub restaurant" surrounded by a new housing development and squatting below a new link road to the A38. Not wanting to put too much of a dampener on the day, we drank our tap-delivered, mass-produced pint of bitter outside in the beer garden and left as quickly as we arrived!
Posted by Toodle 4 comments: