After the success of my last trip and with the weather set to take another turn for the worst, I was itching to get out a bag a few more grayling. A check of the EA river level readings showed that the river had been dropping nicely over the last few days, so I duly booked the day off and set off down the A50 to Staffordshire once again. As I turned into the carpark I was pleased to see that, at least for the time being, I had the river to myself. When I got home from the last trip and looked at the map I found that I'd not actually gone right up to the top of the section, so I had a leisurely stroll across the fields to see what I'd missed. There was an obvious, but tight little pool at the upstream boundary, so that's where I started - running a double maggot on a size 16 past some hawthorns under a small stickfloat. A few trots down and I had my first fish of the day. 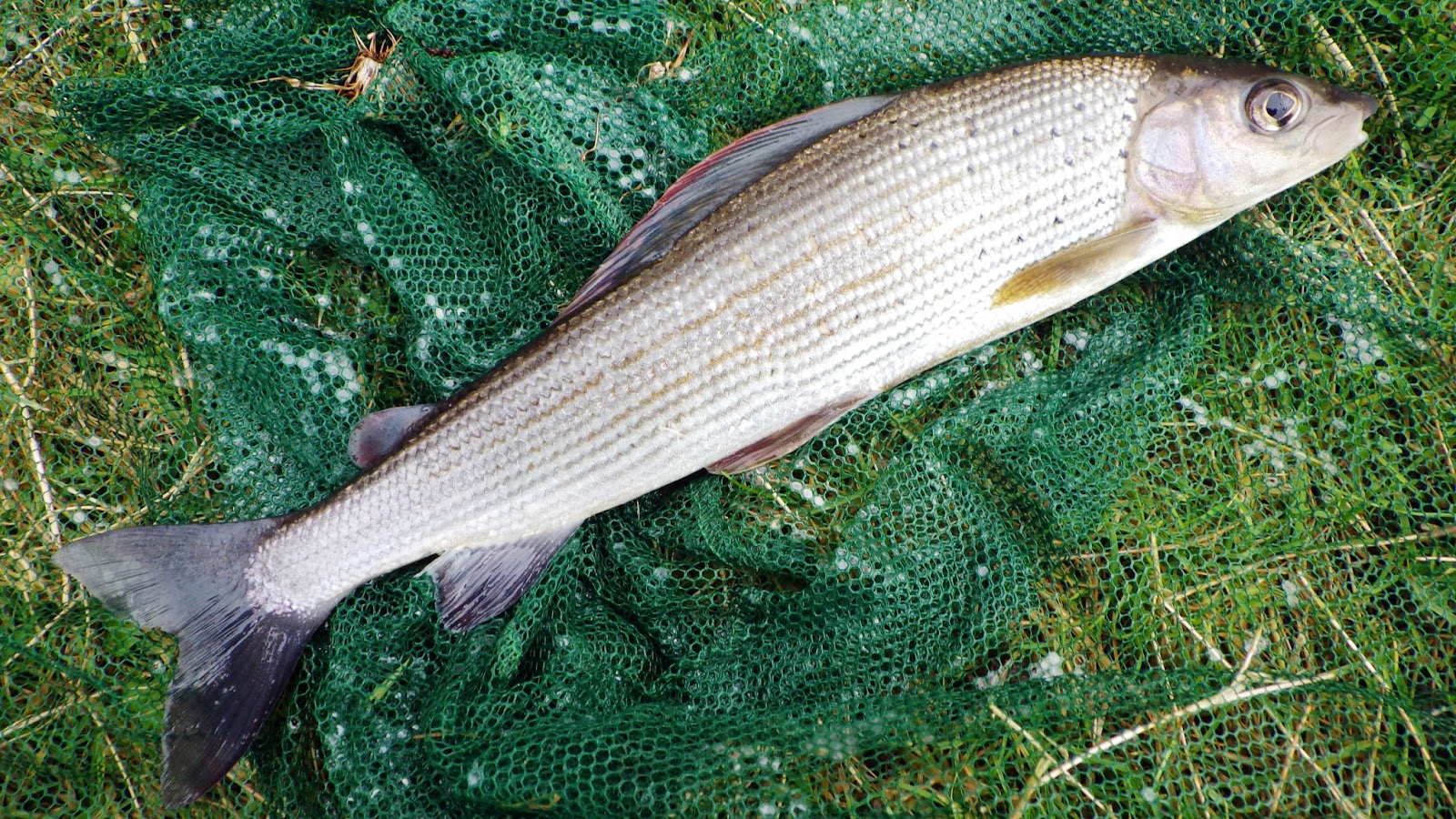 Unfortunately the inevitable happened and I got tangled in the above-mentioned hawthorns (doh!) and, whilst I successfully retrieved my tackle, I'd probably put paid to any more fish out of the swim so made my way downstream, dropping into any likely spots no matter how small. Had a couple out of little pool about as big as my bath just by lowering the float in off the rod top. 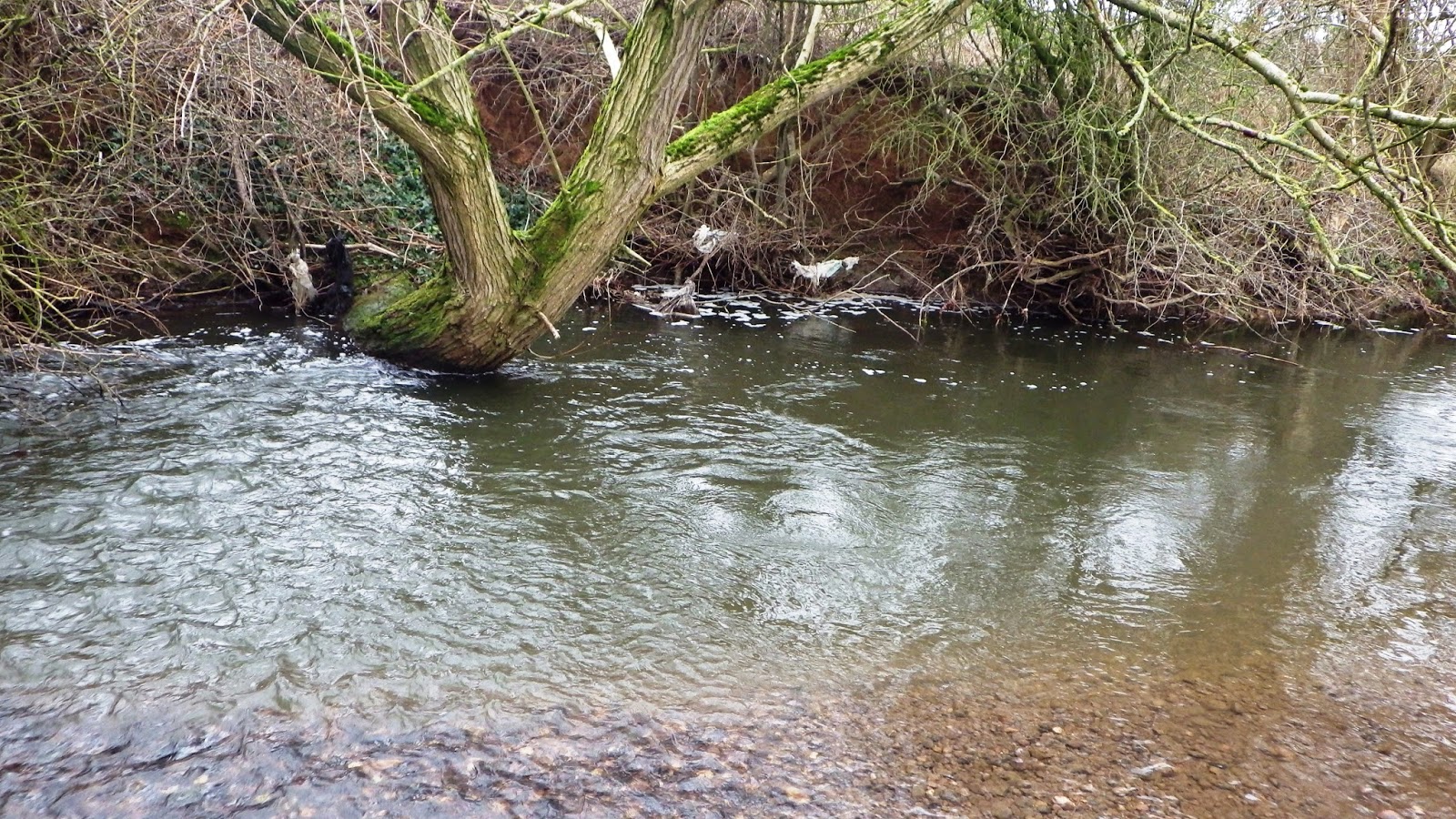 One was a little tiddler that must have struggled to get the double maggot in its mouth, but nice to see given that there'd been a recent, serious pollution incident upstream. 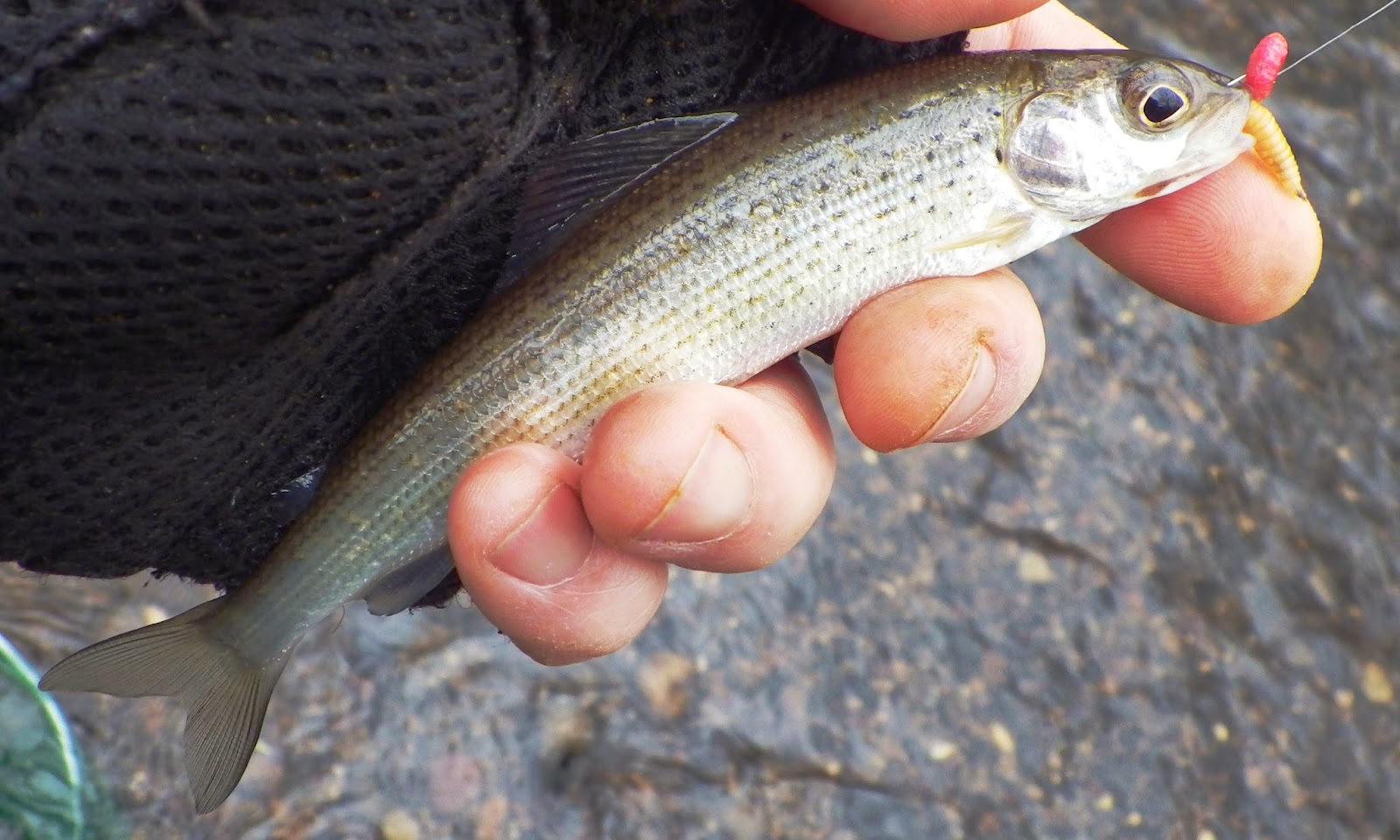 A little one on the "rhubarb and custard"

Came to the first of the swims I'd fished last time. Whilst the river level was only up by a few centimetres from last time, the swim was noticeably more "boily". However, the long rod proved a help rather then a hinderance this time, allowing me to guide and hold the float in a little slack to the left of the main flow. 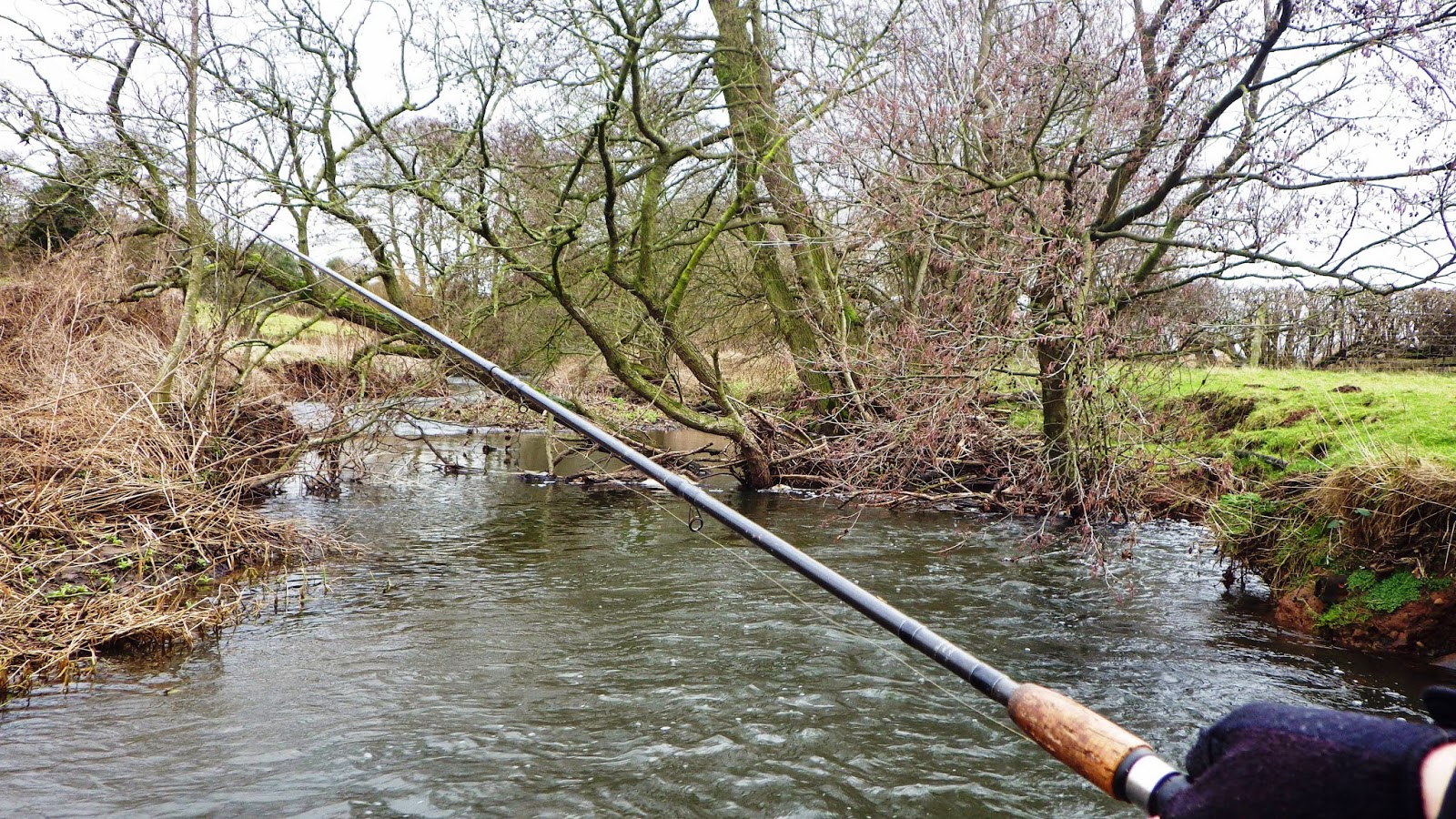 Had a couple of small ones, before my next strike was answered by a good thump and the sight of a better fish twisting madly under the surface. Let him do the normal grayling trick of hanging like a dead weight in the current, before easing him upstream and into the waiting net. 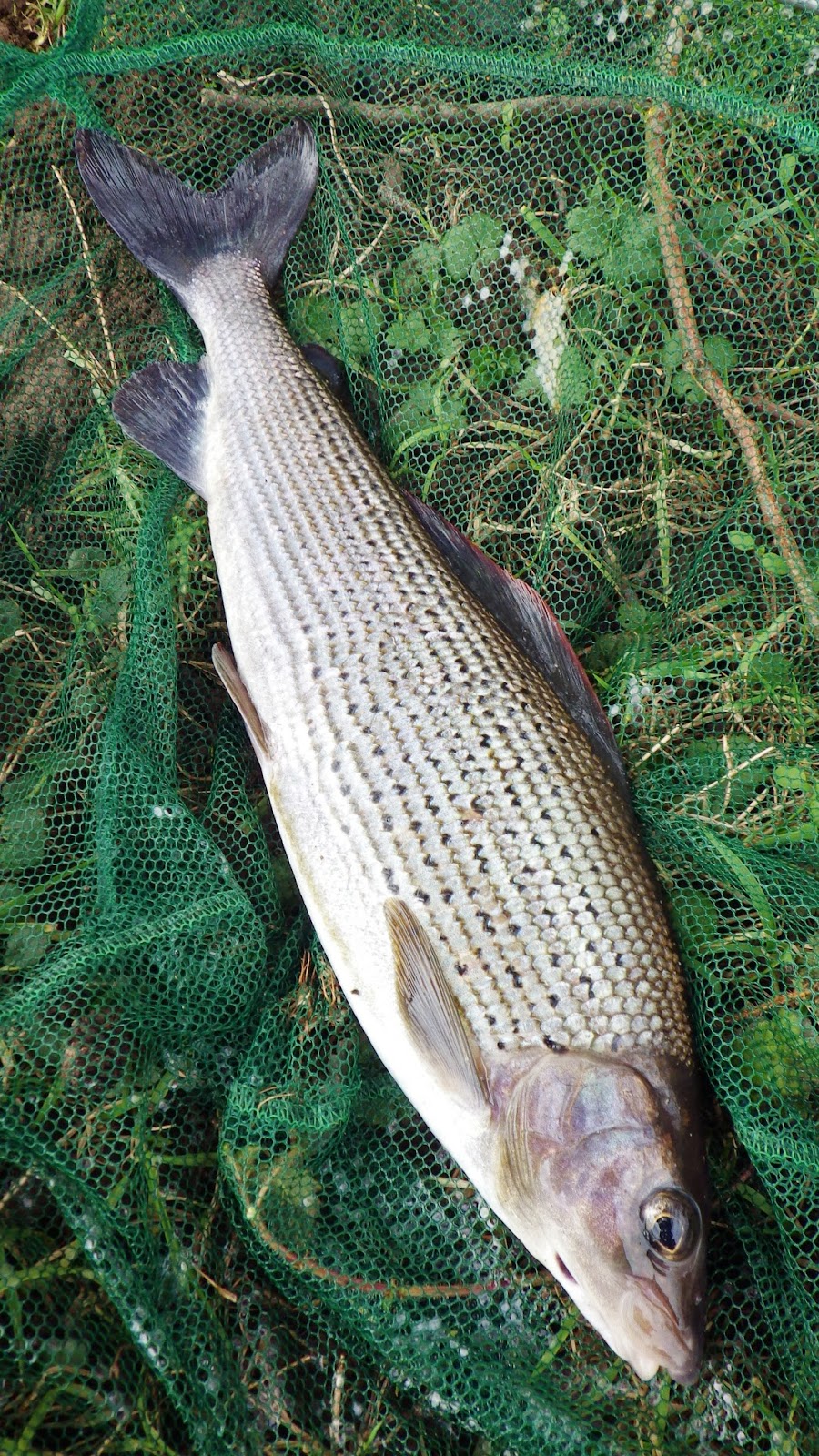 Got into a nice rhythm, flicking in a few maggots and then watching the stick float trundle after them, my only interruptions the azure blue flash of the kingfisher heading upstream and the acrobatics of a treecreeper on the trunk of an alder opposite. Carrie on picking a couple of fish out of each deep hole before moving on downstream. The "twin alders" produced the goods again with another couple of fish over the 1lb mark. The sun even managed to peek through at this stage, lighting up one of the better fish for his release shot. 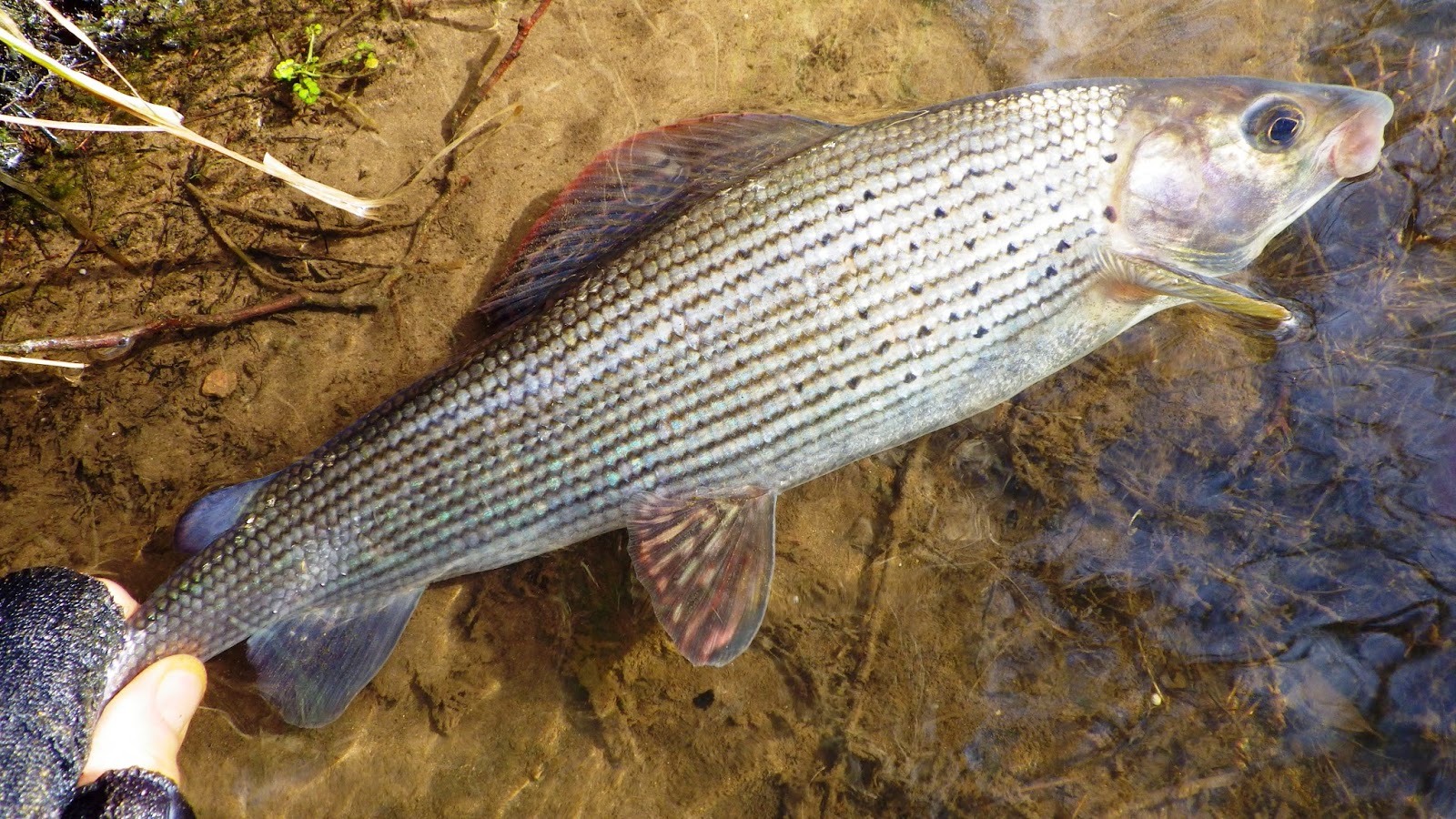 Next swim down was where I had previously dropped onto a number of better fish. However, it was just the one this time. The pattern seemed to be that individual swims weren't as prolific as last time...or was it just because I had itchy feet and wasn't spending so long in each one?? 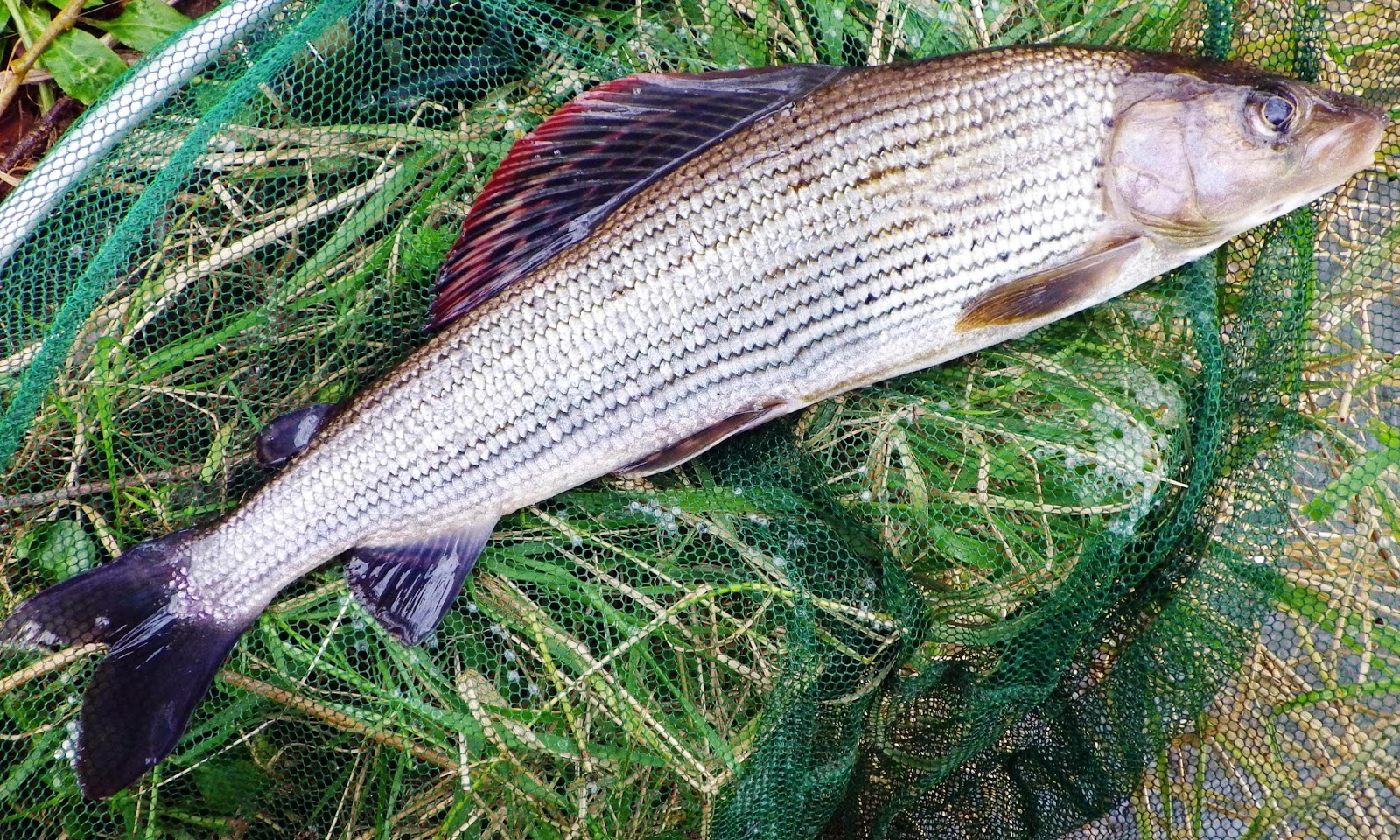 By the time the light started to fade at about 4 o'clock I'd covered and seen a bit more of the river and had 33 grayling, including 8 over the 1lb mark up to 1lb 5oz.  Whilst the average size won't raise any eyebrows, this little river had again provided me with great sport and I walked back to the car for a well-earned bacon sarnie and a coffee more than satisfied with my day. 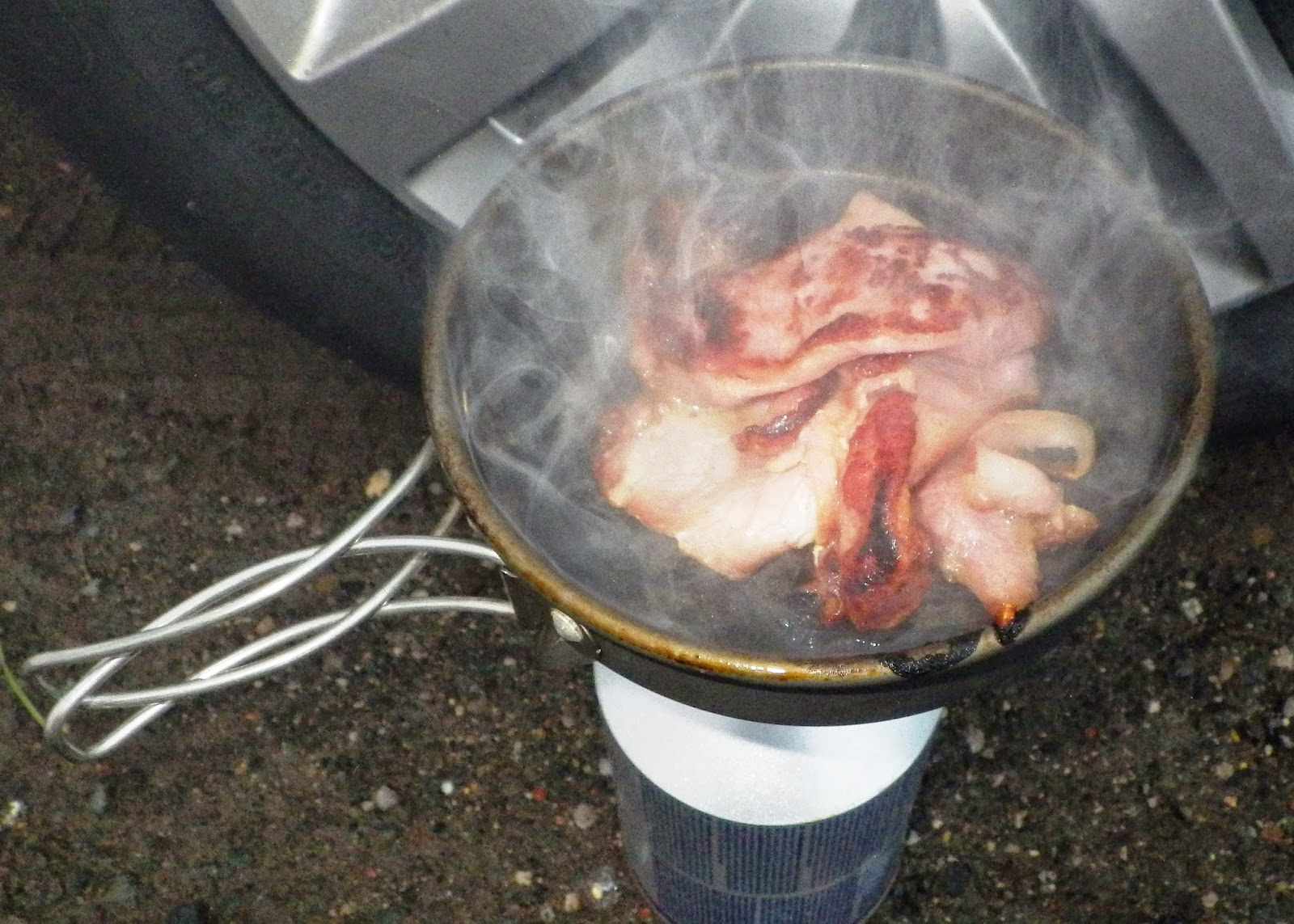 As an aside, I'd googled the collective noun for grayling without much success (pod?) so, based on their bonkers antics when hooked, I thought I'd come up with my own - a "gyration" of grayling!
Posted by Toodle 3 comments:

I'd had two more zander sessions before Christmas, one on the Trent and one on the Soar, that had both ended in blanks. On the Soar I'd been plagued by what I'm 99% sure are chub picking up the deadbaits (one of my roach deadbaits had come back crushed after an aborted run), so I was keen for a change of direction. I therefore planned on getting a few sessions in for the grayling in the New Year. However, the weather and in particular the wind seemed to be having a different say in the matter. I was therefore quite excited when I saw a brief window of opportunity, albeit the calm before yet another fast-approaching weather front off the Atlantic. Sure enough, I woke up to find that the wind had dropped off significantly and a bright, sunny day was promised, so I was soon heading off down the A50 into Staffordshire. Had decided to look at a club water on a tributary of the Dove. The catch reports pre-Christmas had been good and I thought I'd have a better chance of staying out of the wind than on the main river. There was nobody else in the car park when I arrived about 10 o'clock, so I had a leisurely wander up to the top of the section, taking note of any likely looking spots. The river was tiny - I'd come armed with my 13ft float rod and in places I could touch the far bank! However, it was full of features. Started fishing right up against the upstream boundary, running a small stick float down into a pool no bigger than my dining table and only about 18 inches deep. Second trot down - fish on! 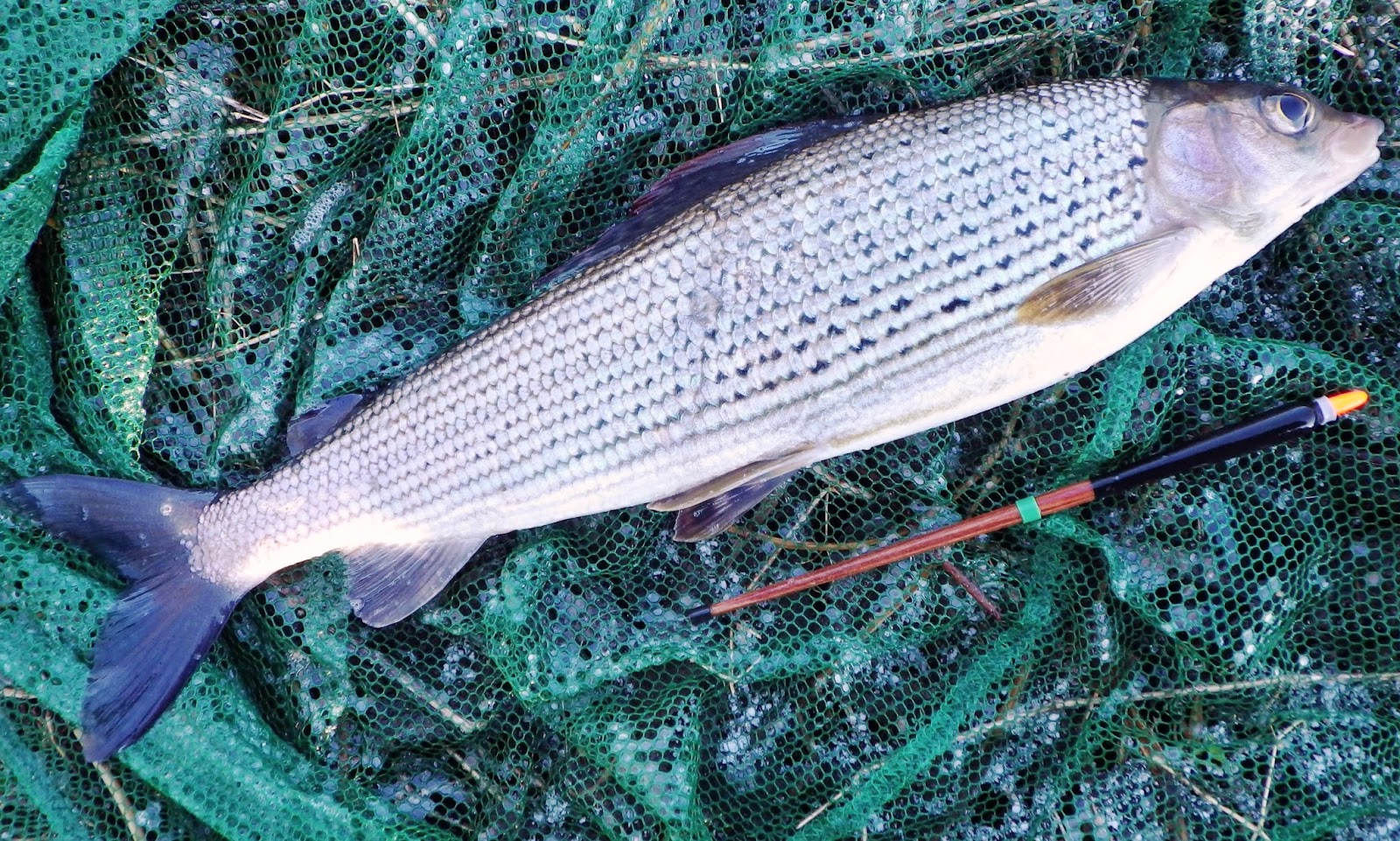 Had a couple of smaller ones before hooking a better fish, a male of 1lb 8oz that gave the run around before I netted it, the long rod proving a bit unwieldy in the confines of the swim. 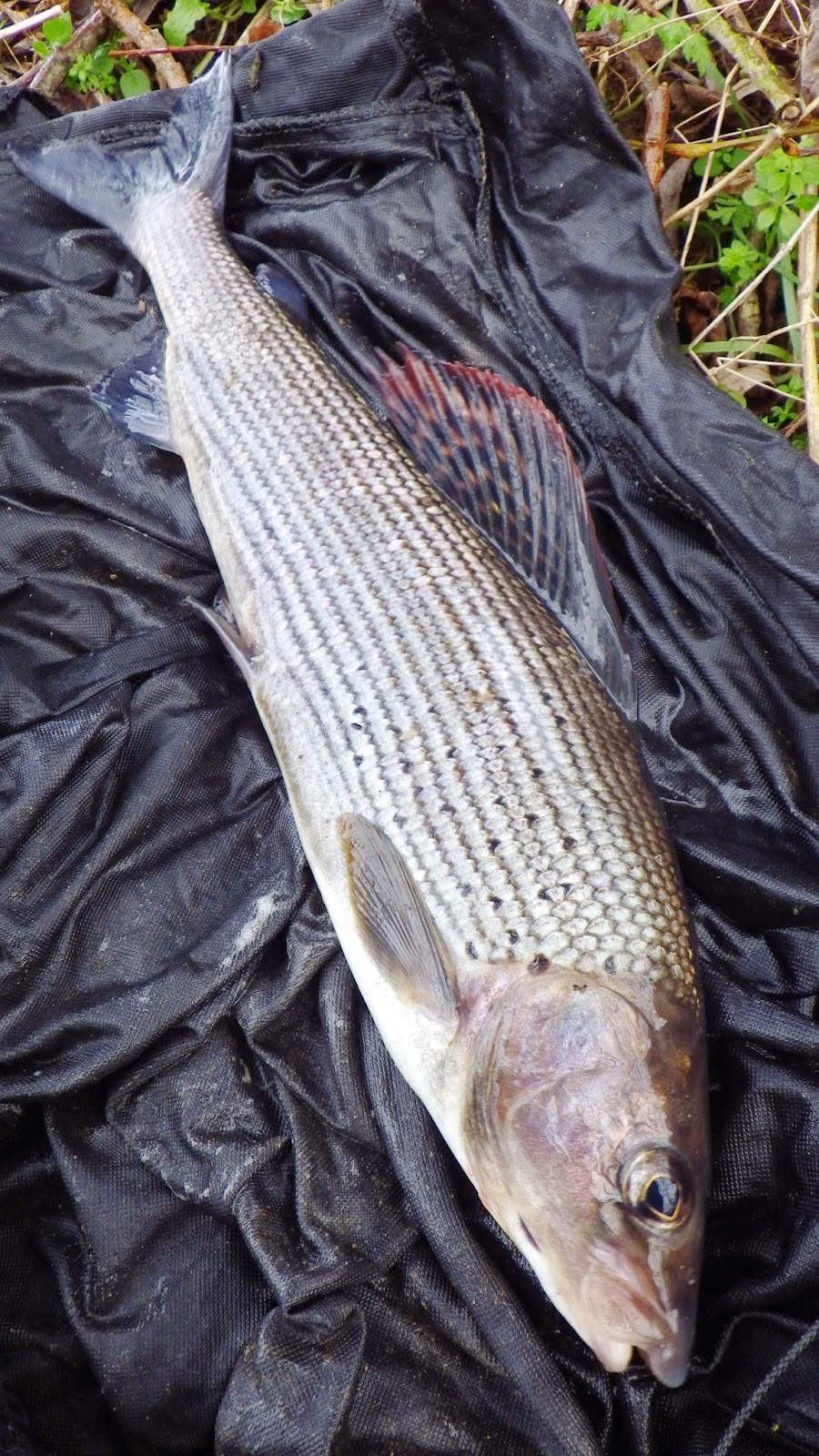 Took nine fish in total out of that little spot before it died and I had to move on - not very far as just 'round the corner was a really nice run along some alders. This time the rod was a benefit as it meant I could keep well back from the edge. 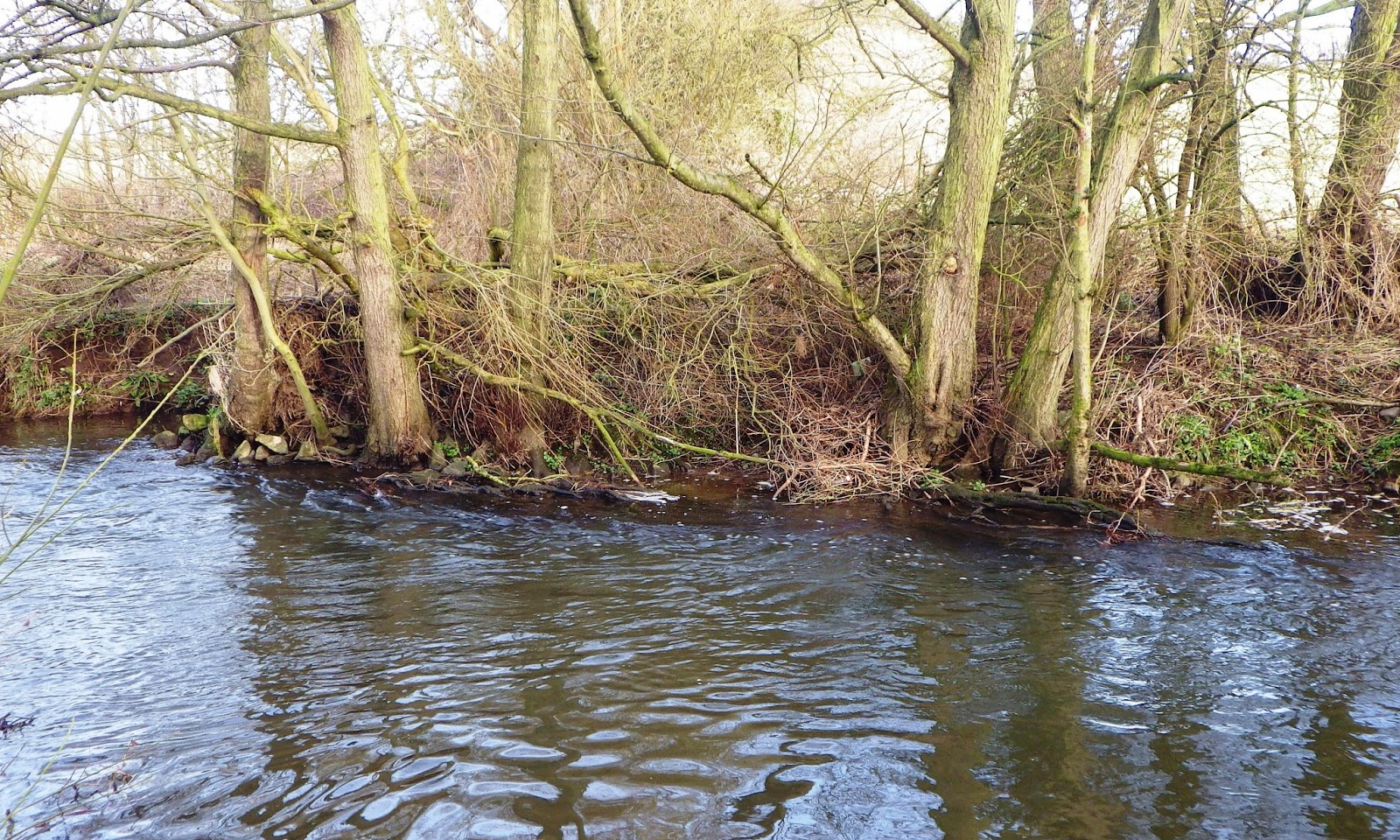 Again it only took a few maggots and a couple of casts to establish that there were some fish in residence. Bumped the first couple before catching half a dozen small ones - little bars of silver and like peas in a pod. 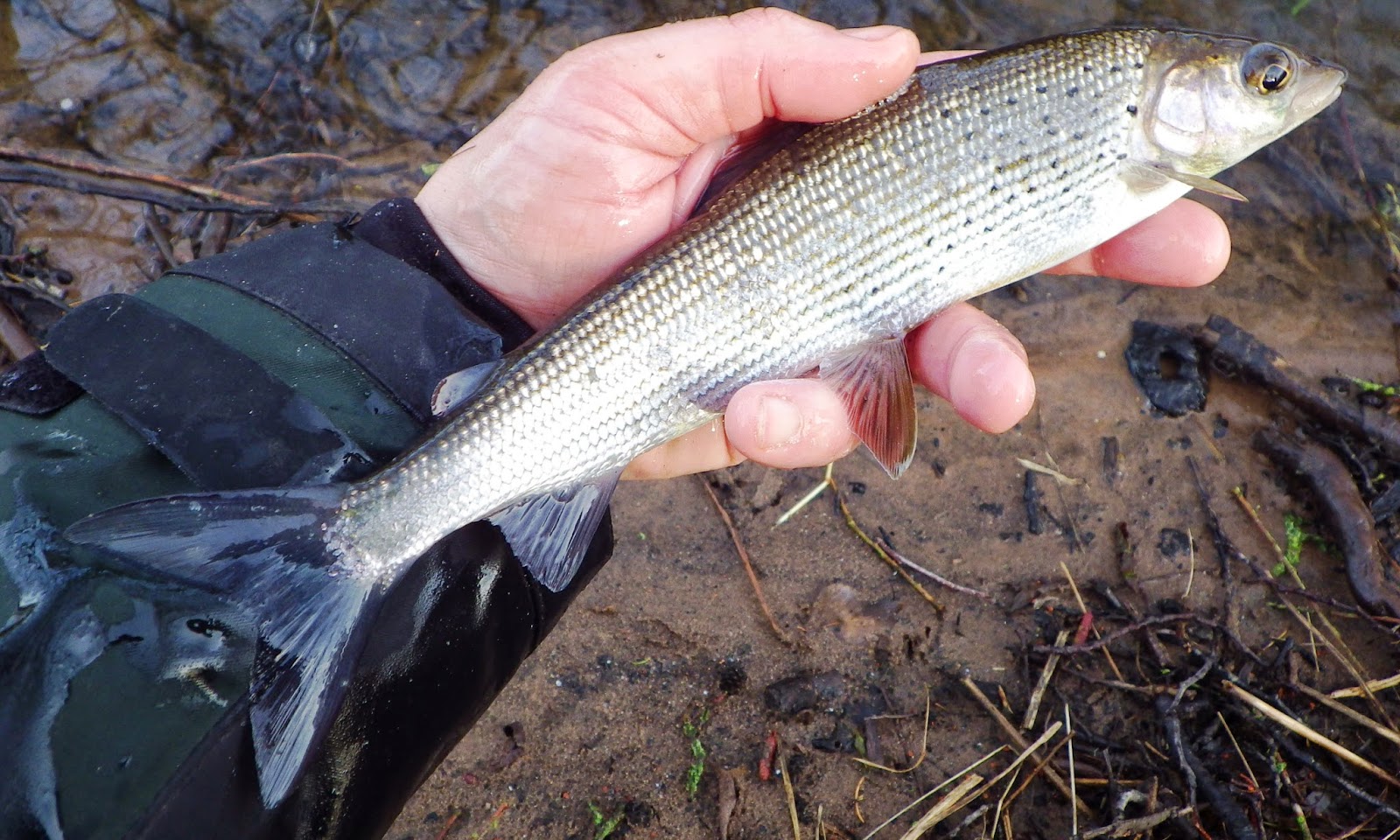 Managed twelve in total from this run, including another nicely marked male over the pound mark. It already appeared that they were shoaled up quite tightly but, happily for me, also well on the feed. 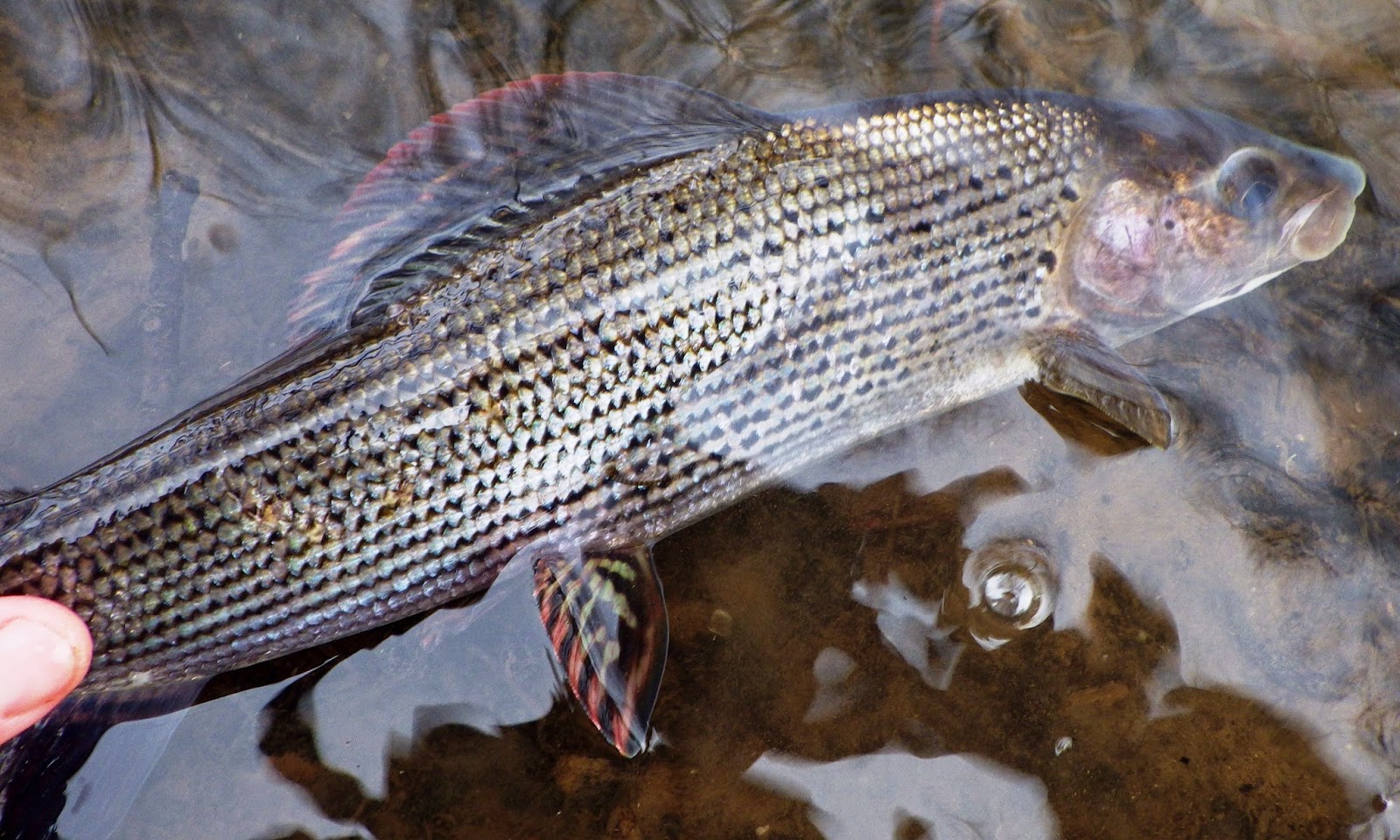 Moved another small distance downstream, this time to where a riffle dropped into a nice pool. 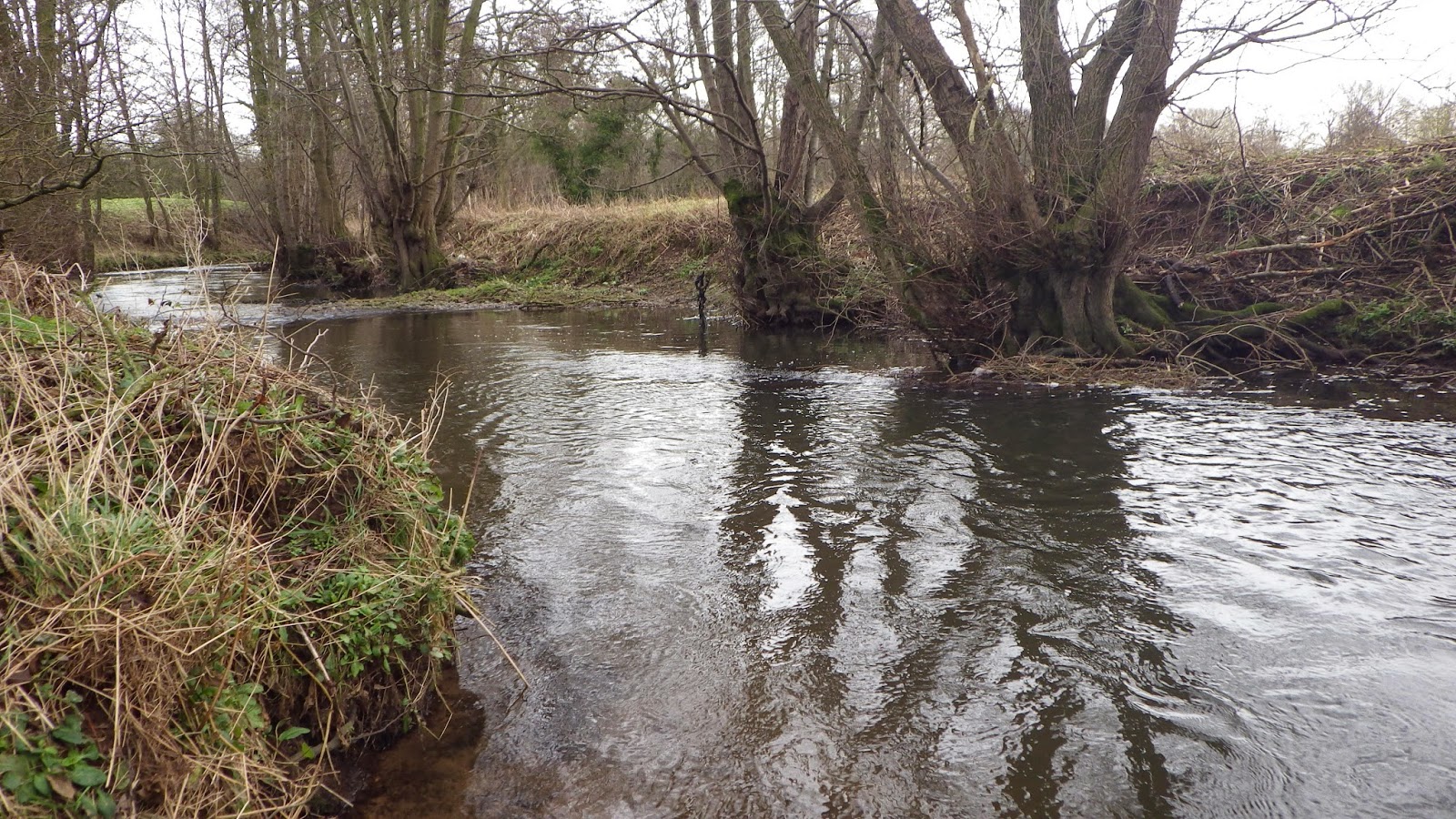 Sent the float down after a few maggots to see it bury first time in the middle of the pool. The strike was met by a good thump on the rod tip as another nice fish did its best to shed the hook. I'd forgotten how well they use the current to their advantage, even on a tiny river like this, feeling every thump and twist through the bent rod, whilst at the same time trying to keep the rod tip out the trees over my head. 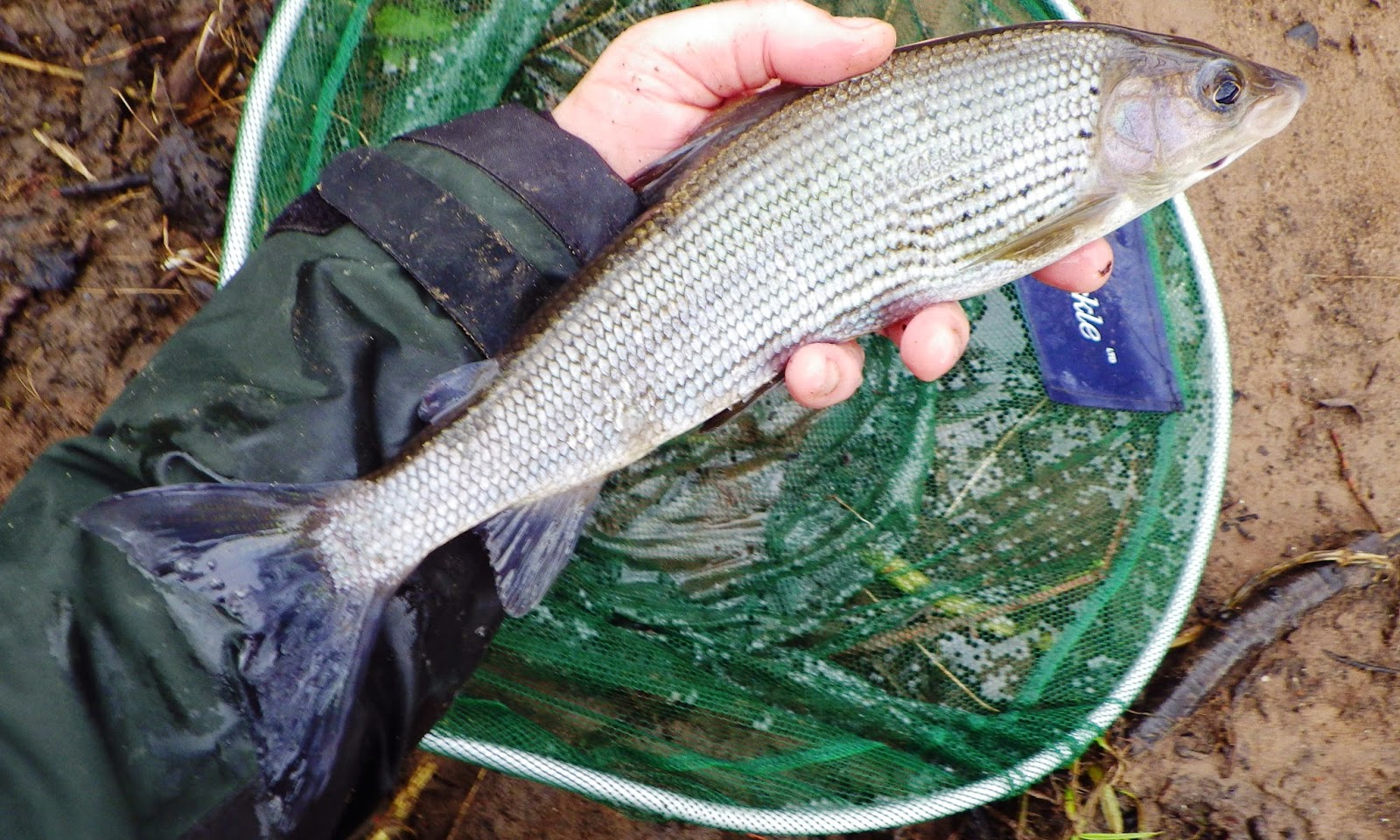 Took a few more from here before again moving a short distance downstream to where the banks steepened and the river narrowed and deepened. I could easily touch the far bank with the rod tip in this spot and had to take a few paces back upstream in order to guide the float into a hole at the base of some alders where it obligingly disappeared. It appeared that I had dropped on a pod of better fish as four out of the five I took from the swim before it died were over the pound mark. 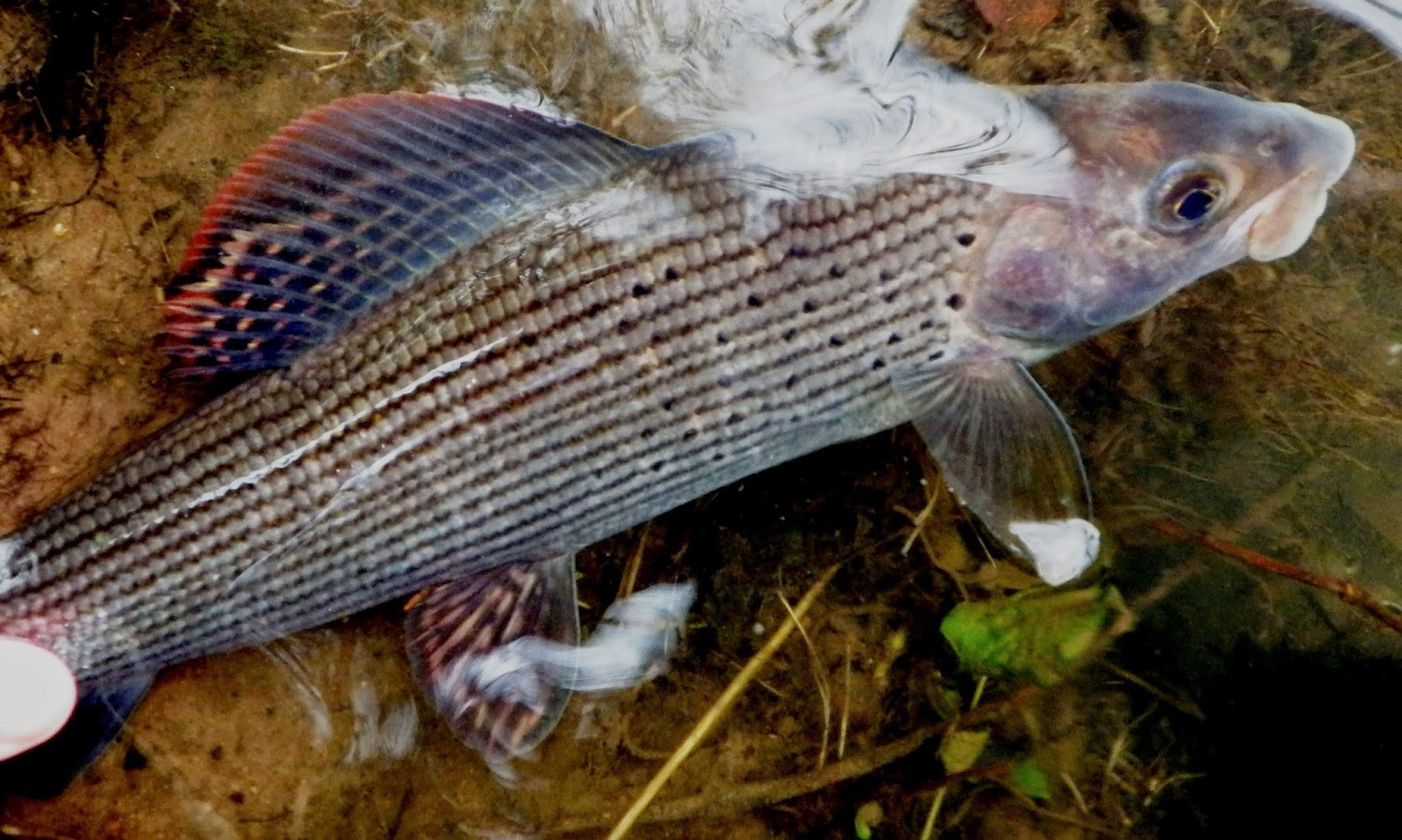 Last but not least

Was feeling a bit chilly now and had started shivering despite all of my layers, so decided to call it a day. Was pleased with the first session on a new water. I'd landed 34 fish, including 9 over the pound mark. However, I'd only managed to cover a fraction of the river in the 6 hours I'd been fishing, so plenty more to go at next time. Let's hope that the weather obliges!
Posted by Toodle 3 comments: