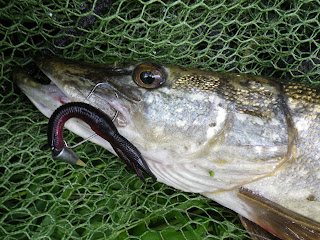 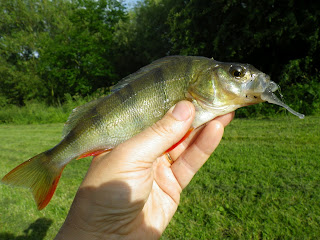 A frustrating month to say the least. With my fishing tackle spread between the garden shed, the attic and the boot of my car (the garage having been taken away in preparation for a house extension), I was relying on a spot of lure fishing to fill the gaps. However, the unsettled weather had prevented me from even doing that. A trip down to Burton to meet Tim had ended abruptly as I arrived. In fact I didn't even bother getting out of the car, such was the ferocity of the wind, rain and hail (!) that rolled in from the South. So, after dropping off the daughter at Nottingham Tennis Centre for her lesson, I decided to make the best of an opportunity and headed to the Beeston/Nottingham Canal. Arrived to find it tonking through and pretty coloured from the rain (the canal comes straight off the River Trent only a mile or so upstream) and boat movements. 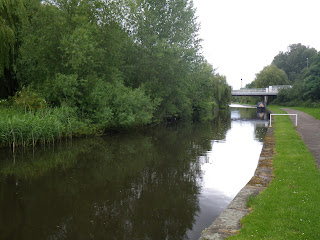 Wasn't too put off as I thought I had a good chance by fishing the dropshot and holding it in the many little slacks and holes in the far bank reeds and lily pads. Was using a Zoom 4" Fluke in pearl on a size 2 standout hook. 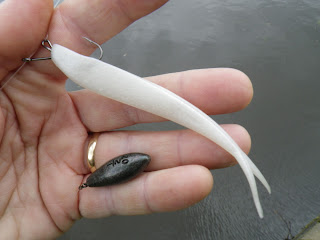 The theory worked in practice. The action of the lure just from subtle twitches of the rod top looked fantastic. Unfortunately the fish - if they were there - didn't respond and my hour and a half window I had left before I had to pick up the girl again soon evaporated. Back to the drawing board..........﻿
Posted by Toodle No comments:

Had a couple more opportunites for a lure-caught bass. Firstly, met up with Joel Squires, aka "Joel Soul" for a social in North Devon. Went to one of his marks near Saunton for the last couple of hours before high tide. Conditions looked good, but we couldn't get a sniff at the first spot, despite going through the lure box, so moved up to the point. 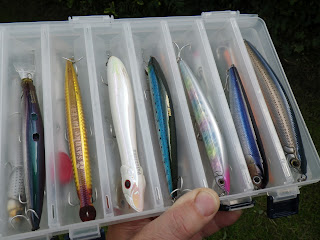 Shiney, but any good?﻿

Again, nothing much happened until a couple of leaping mackerel heralded the arrival of a Grey Seal and probably the end of our chances of a fish from this spot. However, at this point a decent wrasse glided over the rocks under my feet, so it was on with a texas-rigged senko, but even this failed to get a response. Eventually wandered back to the first spot, where we had a few more casts as the tide dropped away again. A shout from Joel indicated he was in - only a small one about 2lb, but a bass none the less and a bit of a relief for Joel as he'd had a pretty slow start to the year. Fished on with renewed enthusiasm, but that was it for the day. A highlight on the way back was a male Wheatear that let us get to within a few feet of his perch on top of a sheep turd before he flew off.

Second bite of the cherry was in Pembrokeshire. Tide times and weather had been all wrong until the very last day, when I was able to get onto the estuary at first light with about two and a half hours before high tide. Conditions weren't brilliant as the river was coloured up after recent heavy rain 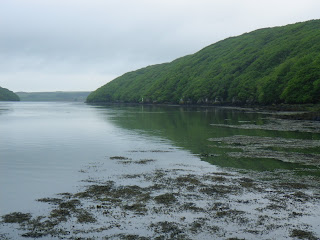 Fished surfaces lure as the tide came in over the rocks. Was concentrating like mad on the Sammy (second from right in lure box above) when I saw a fish subtly swirl behind the lure. Stopped it dead, paused for a few seconds, then started "walking the dog" again. Another subtle swirl and.......that was it!  Carried on, but had to give up as the rapidly rising tide picked up all the loose weed, making presentation impossible. Roll on Summer!﻿
﻿
Posted by Toodle No comments:

Had a meeting down in Leicester, so was able to stop off at Kegworth for another couple of hours. Headed for the area around the Deep Lock again. The cabbages and in-stream weed had really taken hold since last visit and it was difficult to fish the Big Hammers effectively without snagging up. Therefore switched to a small Sebile Magic Swimmer softbait from Harris Sportsmail. 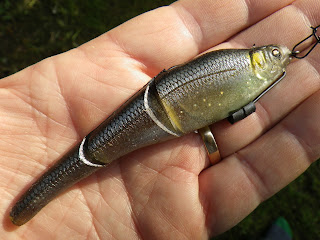 Rigged up, the hook point sits in a little groove in the back of the bait making it 99.9% snag free, so you can chuck it will relative impunity into all sorts of places, even twitching it over the top of lily pads. By altering the number and position of the belly weights threaded onto the hook you can also change the sink rate and action. I was impressed with it anyway! Pike were too, it was just a case of keeping the bloomin' things on. Had three solid takes, one literally as the lure hit the water, but had all three come adrift in the fight. Seems there's a knack to fishing with weedless lures that I need to get the hang of. Ideally you should pause after a take to allow the fish to take the bait into its mouth and compress the body to fully expose the hook. Oh well, live and learn. Fishing isn't meant to be easy!
Posted by Toodle No comments: