Another few days down in Wales and another chance for a few more bass. However, it wasn't until right at the end of the holiday that all of the conditions lined up favourably. Dawn on the last two mornings therefore saw me expectantly waiting down on the estuary at low tide. 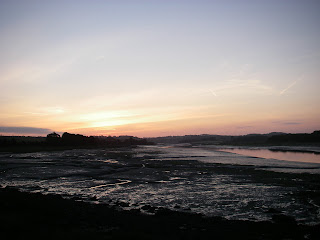 Dawn on the estuary

As soon as the current started pushing in I set about covering the water in front of me with the Megabass X-130 in the sardine pattern that had done the job on previous occasions. On both days there was an endless procession of mullet making their way past me up the estuary, some of them just drifting along with the current with their backs out of the water and others speeding through like torpedoes with the occasional acrobatic leap thrown in. The water was gin clear and there were also lots of small bait fish visible in the margins, which seemed to bode well. However, on the first morning I began to wish I was fishing for the mullet and not the bass, as I eventually managed just the one small schoolie. Did slightly better the following day in terms of numbers with four more schoolies, the best barely scraping 2lb. 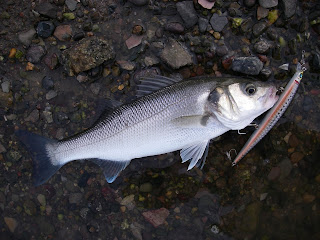 Silver bar
Have enjoyed my few sessions on the estuary this year. However, there'll be another opportunity for a "proper" fish during the bi-annual surf trip down to Saunton in October when I hope to meet up with Joel Squires again. In the meantime, how am I going to catch those mullet next year.......?
Posted by Toodle 2 comments:

More a pre-work recce to look for some new spots to try before the end of the trout season in a few weeks time. However, took along the fly rod if the opportunity arose for a cast or two. There had been heavy rain overnight but, whilst carrying a bit of extra water, the brook only had a slight, peaty tinge about it. By contrast the stream across the other side of the field was running a nice grey/brown colour and smelled slightly of sewage! Had a poke around on downstream section again and got stung through my trousers by the nettles a few times as a result. Did spot a couple of fish rising so, as there was nobody about still, went and got the rod from the car. Had exhausted my supply of my favoured fly pattern, a size 14 GRHE with a copper head, on previous trips so went for a black goldhead instead. The trout didn't seem to mind and it was probably a better choice given the slight colour anyway. Bumped one off first cast, then had a small one to hand. 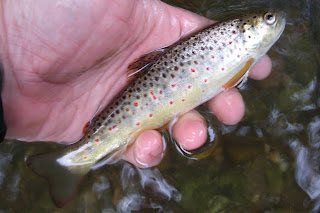 Half a dozen casts (flicks, dibbles, dangles - whatever you want to call them!) later, I had a better one in the net. 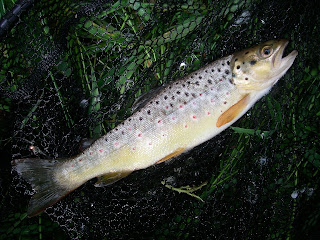 Spotty 2
Left it at that, conscious of the time and the risk of drawing unwanted attention to myself, but already thinking of a couple more trips in September to try and catch an end of season "lunker".﻿
Posted by Toodle No comments: