Met Tim in the carpark at Tutbury after work for what would be a final fling on the rivers. Perch were the quarry and we headed to a stretch that had been kind to us in the past. Whilst I would be floatfishing lobworms over maggots, Tim had brought his lure rod to see if he could put his newly-found dropshotting skills to good use. River was low and clear and it soon became apparent that it was absolutely snided out with minnows. Right from the off, the float was constantly on the move, pulling right under as the little beggars tried to pinch the worm off the hook. Tim had a follow early on from a pike of about 8 lb, but failed to tempt it into taking the lure, so headed off upstream. I carried on trotting the loborm down the crease and letting it swing into and hold next to the bank at the bottom of the swim. After a few trots down, the float disappeared for what seemed to be the hundreth time and stayed under. This time, rather than fresh air, the strike met with firm resistance. The head banging indicated that I had a decent perch on and I soon got sight of it in the clear water. A couple of minutes later I had a nice, fat Dove perch in the net that went a pleasing 2lb 6oz on the scales. 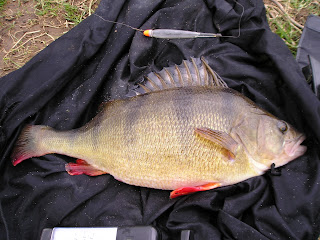 Fatty﻿
Took a quick snap of it on the weigh sling, popped him back and got a fresh bait out in case he had any of his mates with him. Unfortunately, it was back to the attentions of the minnows instead. Tim reappeared a bit later with a dry net and the news that none other than the great Bob Roberts was fishing just upstream. He then returned to his original swim, where he eventually wangled a little jack. I carried on for a bit longer, before snagging up and losing my end rig. Took that as a sign that my river season was over and packed up!
Posted by Toodle 4 comments:

Paperwork, meetings and the unpredictable British weather conspired against me last week. I managed to grab a couple of hours to go after some chub on the Trent on Friday afternoon, but just got freezing cold for one bream! After another busy start to this week, I decided that I just wanted to go and catch some fish, so threw my remaining deadbaits in the bag and headed to the Soar again. 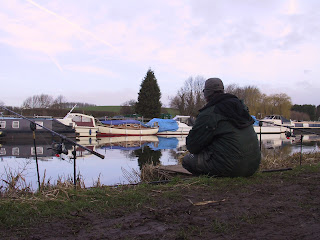 Waiting for a big girl...﻿
Again, the response in the first swim was pretty quick, with three fish of the usual stamp in the net within an hour - all on the same rod and all on smelt. 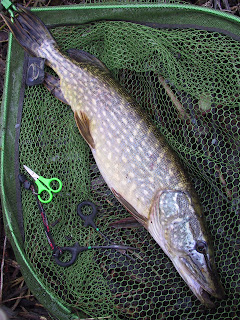 ...but all I got were these.
Had a lucky escape in the middle of all that. Was sat watching the floats when I happened to glance downstream to see a low flying Canada Goose coming straight up the river towards me. Jumped up in time to see it pass straight under the first line, but then give the second line a hefty clip with its wing, causing the rod to cartwheel over the front rest and disappear into the river! I was standing there completely stunned when the top six inches of the rod rose gracefully like Excaliber from the water. Luckily it was within reach of the landing net, so I was able to snag it and get it back in. Couldn't help laughing out loud  - my face must have been a picture when the rod went in. My only thought was that it must have been a "stealth goose", because you can usually hear the noisy buggers coming from a mile off!

Went quiet after the intial flurry, so started fishing to the clock and leapfrogging downstream. Picked up another fish, again on smelt, that decided to thank me for unhooking it by doing a good impression of a crocodile, leaving me with nicely gashed knuckles. 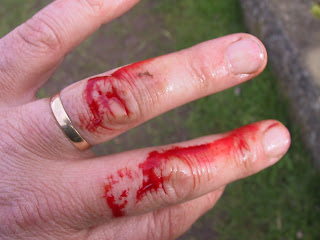 Ouch!
Had a couple more runs after this, but the hooks failed to stick for some reason. Stomach was growling by 12 o'clock so when an old boy decided to reverse his longboat through my swim at full throttle (happily waving at me while he did so!), I called it a day and headed home.
Posted by Toodle 3 comments: