Happened to be down near Leicester during the day and had thrown the light lure rod in the boot of the car on the chance of stopping off somewhere on the way home. Things went to plan for once and first stop was the Loughborough Navigation, but I was put off by the colour and turbidity that I assumed (wrongly) was down to boat movements. Therefore headed off to Kegworth Cut next only to find it similarly coloured. Could only assume that it was down to the bit of rain that we'd had a day or so ago. Had some newly-purchased 2" Kyoptos with me so dug out the brightest I had, a red and red yellow version, and coupled it with a 3.5 g jig head. 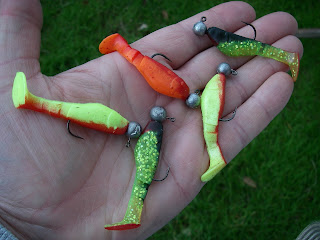 Visibility was only 6-8", but I figured that if I could work the lure slowly enough I'd be in with a chance. A few branches courtesy of recent towpath tree pruning were the only highlights of the first hour and I'd begun to start to lose confidence when I had the first proper hit.........and failed to connect! Luckily that heralded either a little feeding spell or I happened to drop on a small group of fish. Whilst I was probably expecting perch, these turned out to be micro pike. Had three of these little beggars in quick succession. 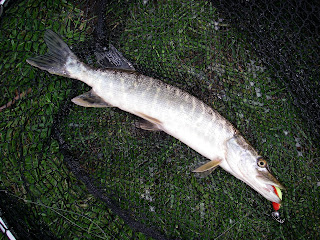 Nuisance!
Had a few more casts, but with time ticking on and no more interest, headed back to the car.
﻿
Posted by Toodle 2 comments: