Headed out to Derbyshire again first thing for probably my last crack at a few more Brownies. Nobody else in the parking spot meant I had the section to myself again, so it was quickly down to the river through the maize. Have to say that the fishing was a lot harder this time. The river was at its lowest and clearest, so any careless approach, duff cast or snag up was probably an opportunity gone. The flow had also dropped off in the pools and I could now see the bottom in most of them, so the faster, broken water seemed to offer the best chance, at least for the smaller fish. 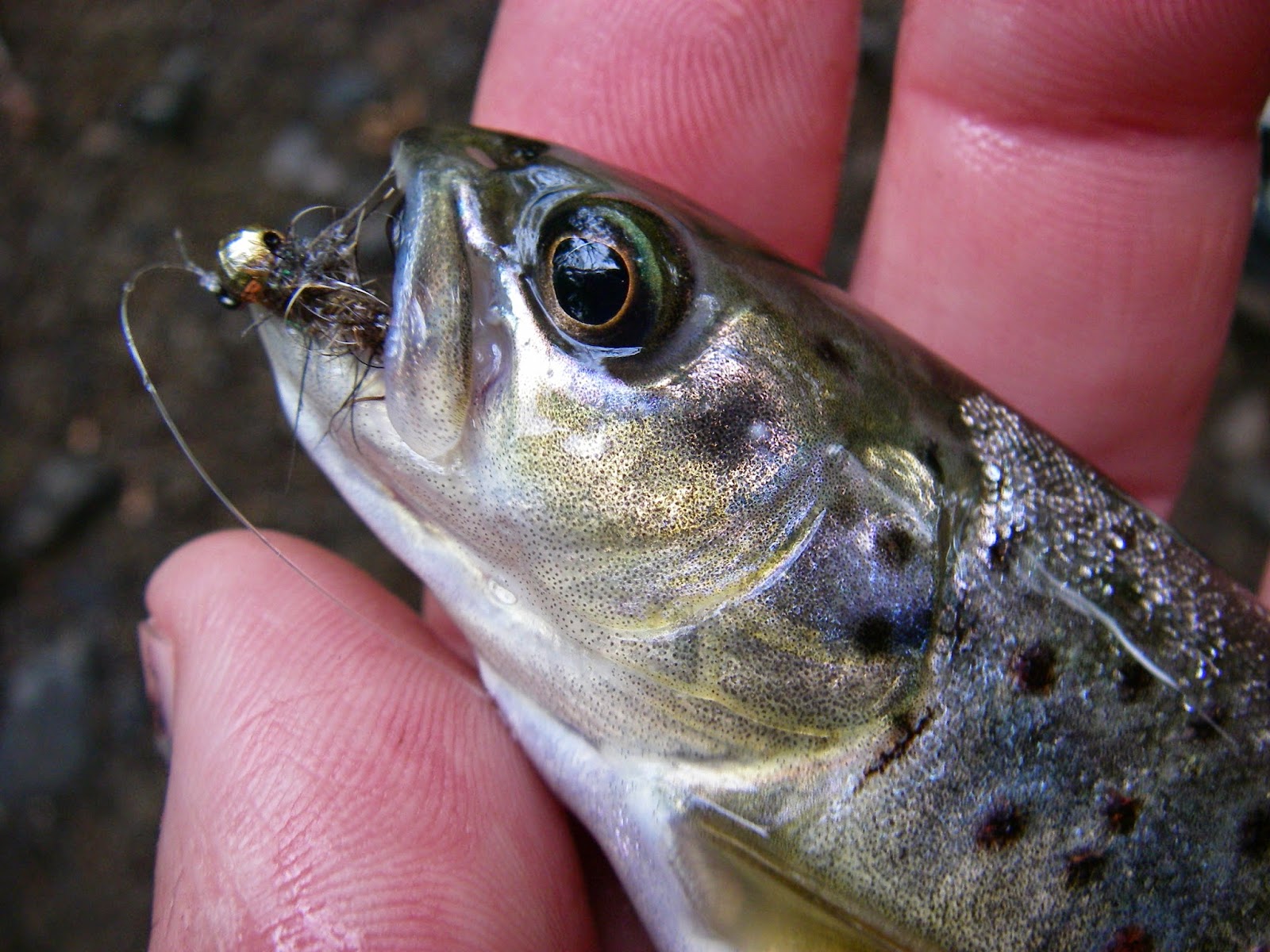 Small one on the nymph

Had a better one by jigging (induced take!) the nymph past some tree roots. 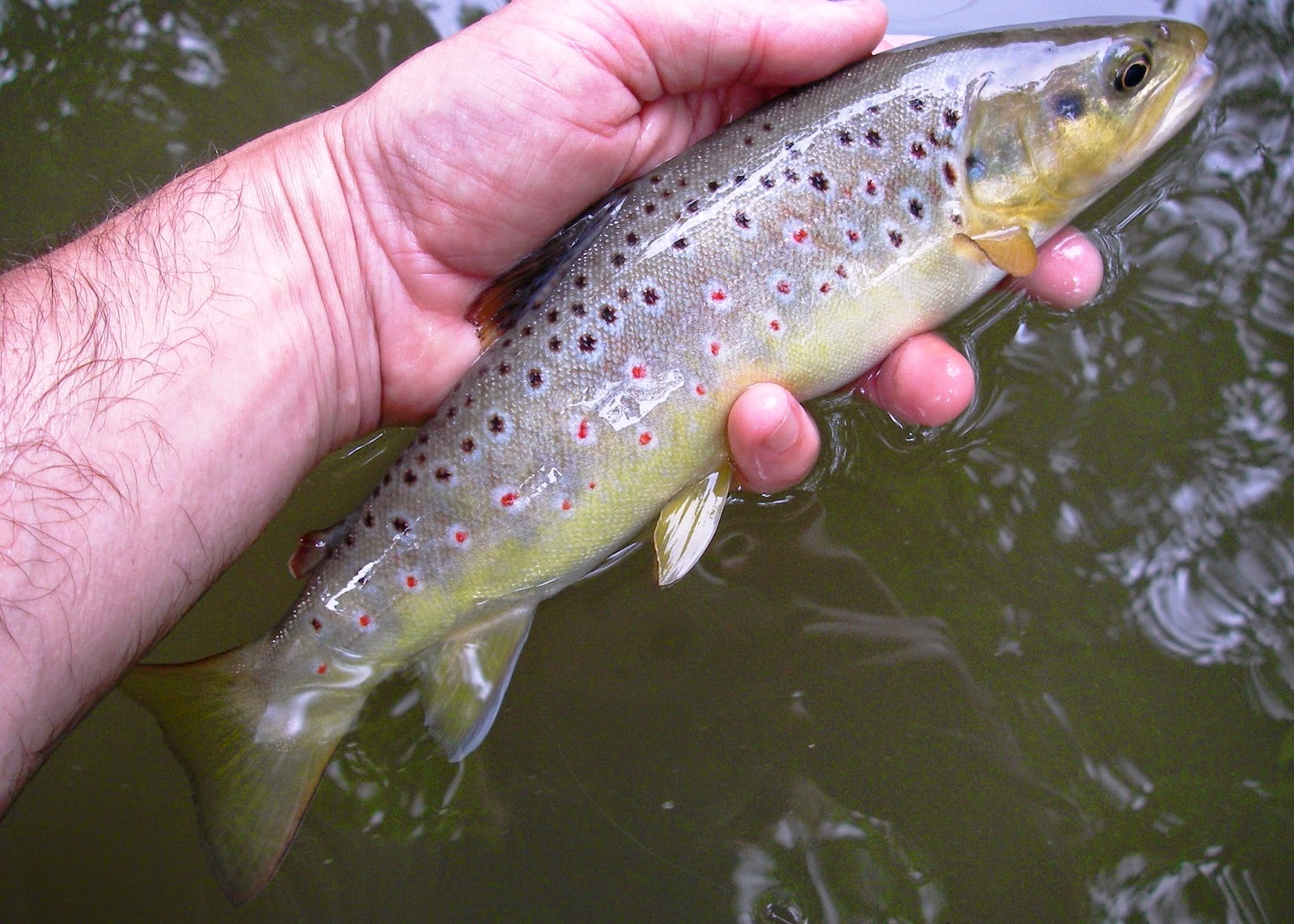 Getting jiggy with it

Made a bit of a gruesome discovery on the shallows upstream - a dead hare with a rather surprised expression on its face! Also disturbed a little brown duck with white "spectacles" that I didn't recognise. She had at least one duckling that shot into the bankside vegetation with her, so gave them both a wide berth. Looked it up later to find that it was a female Mandarin, an introduced species, but apparently common in the area, e.g. on the lakes at Markeaton and Allestree. 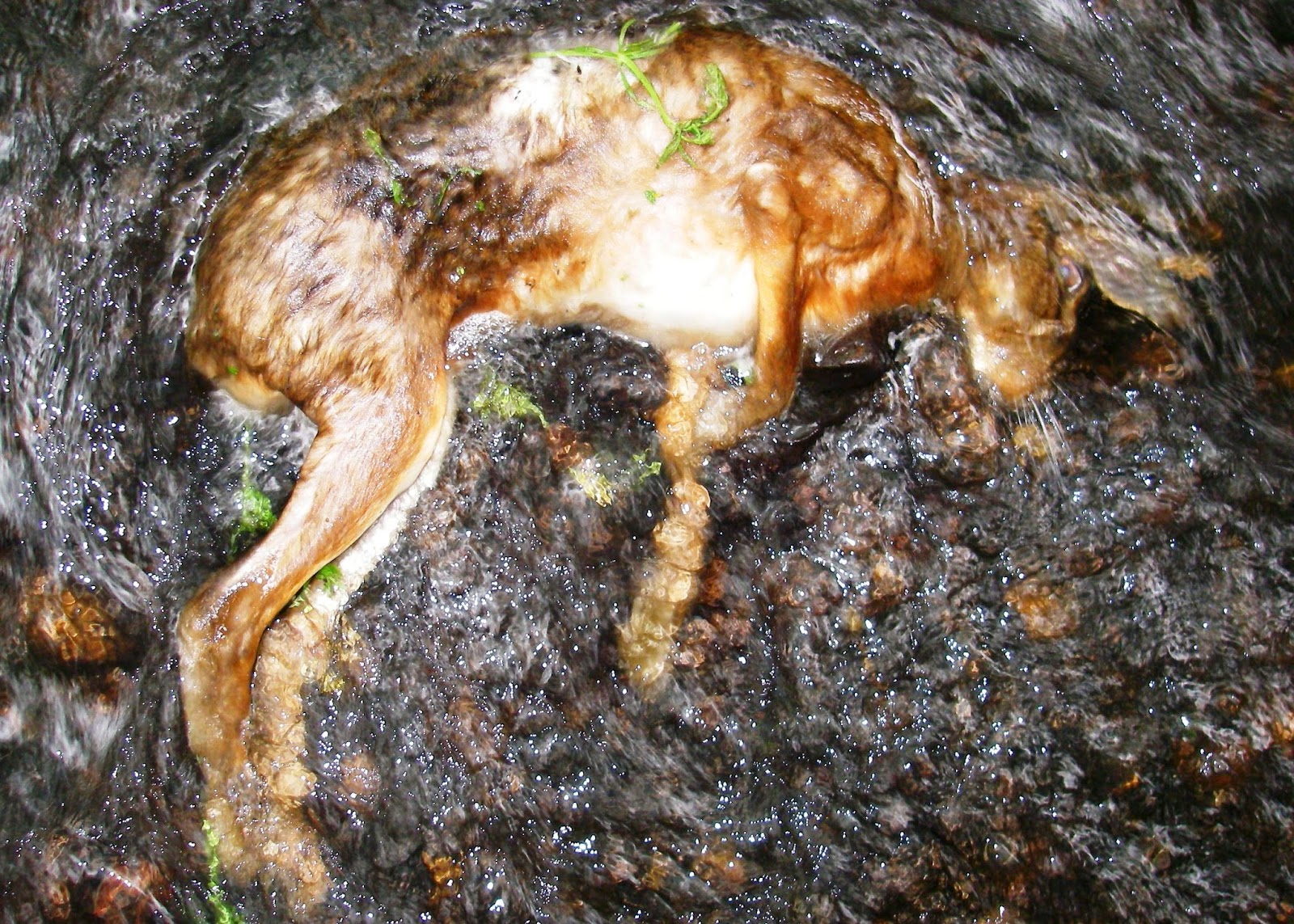 Had a couple more little ones from the faster water at the head of a pool. There seems to be a lot of these around, which should bode well for the future. 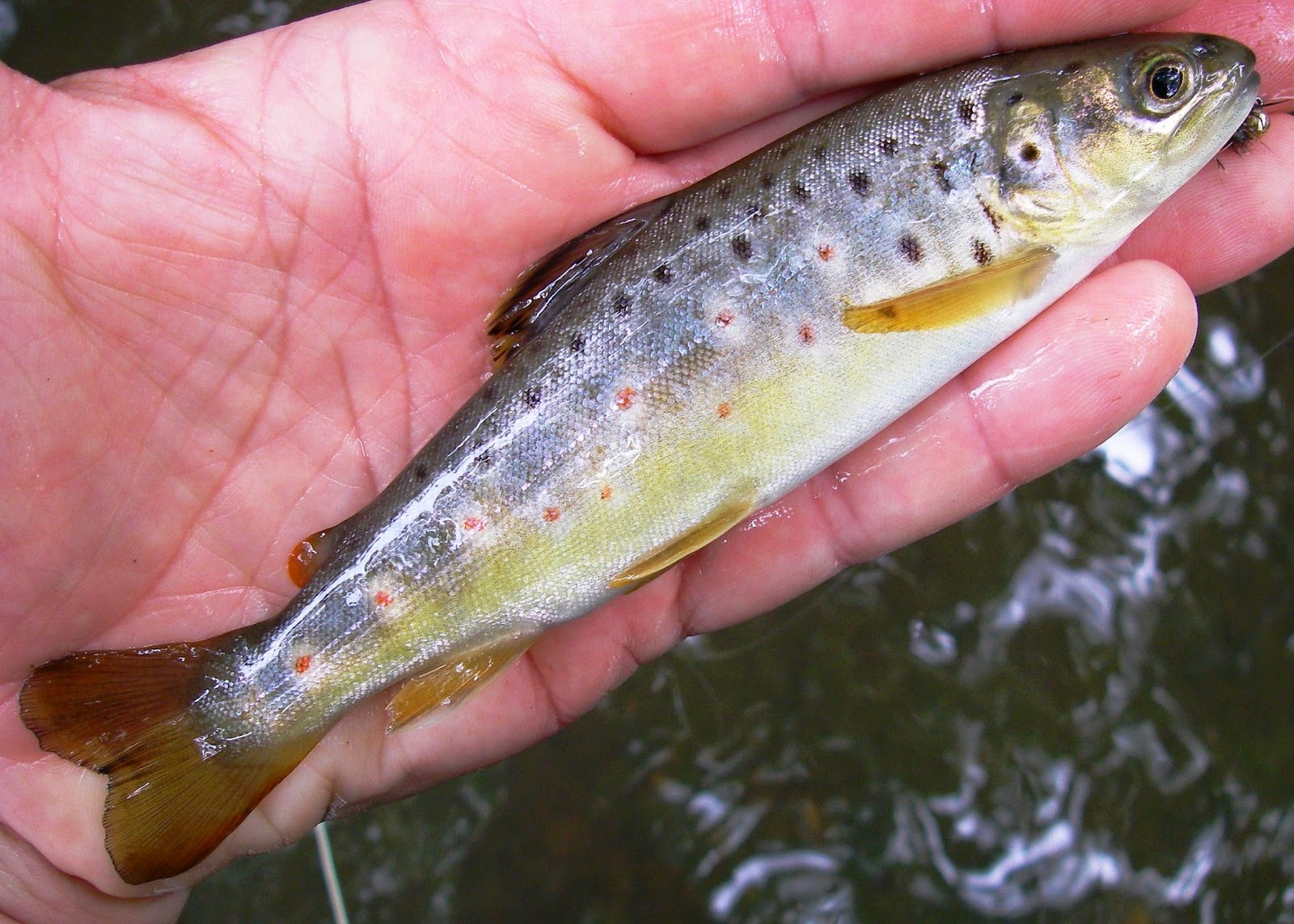 Hooked and lost a couple of bigger fish that would have improved the scorecard no end and was thinking it was all over when I had the best fish of the morning, again by trundling the nymph past his lair in the tree roots. 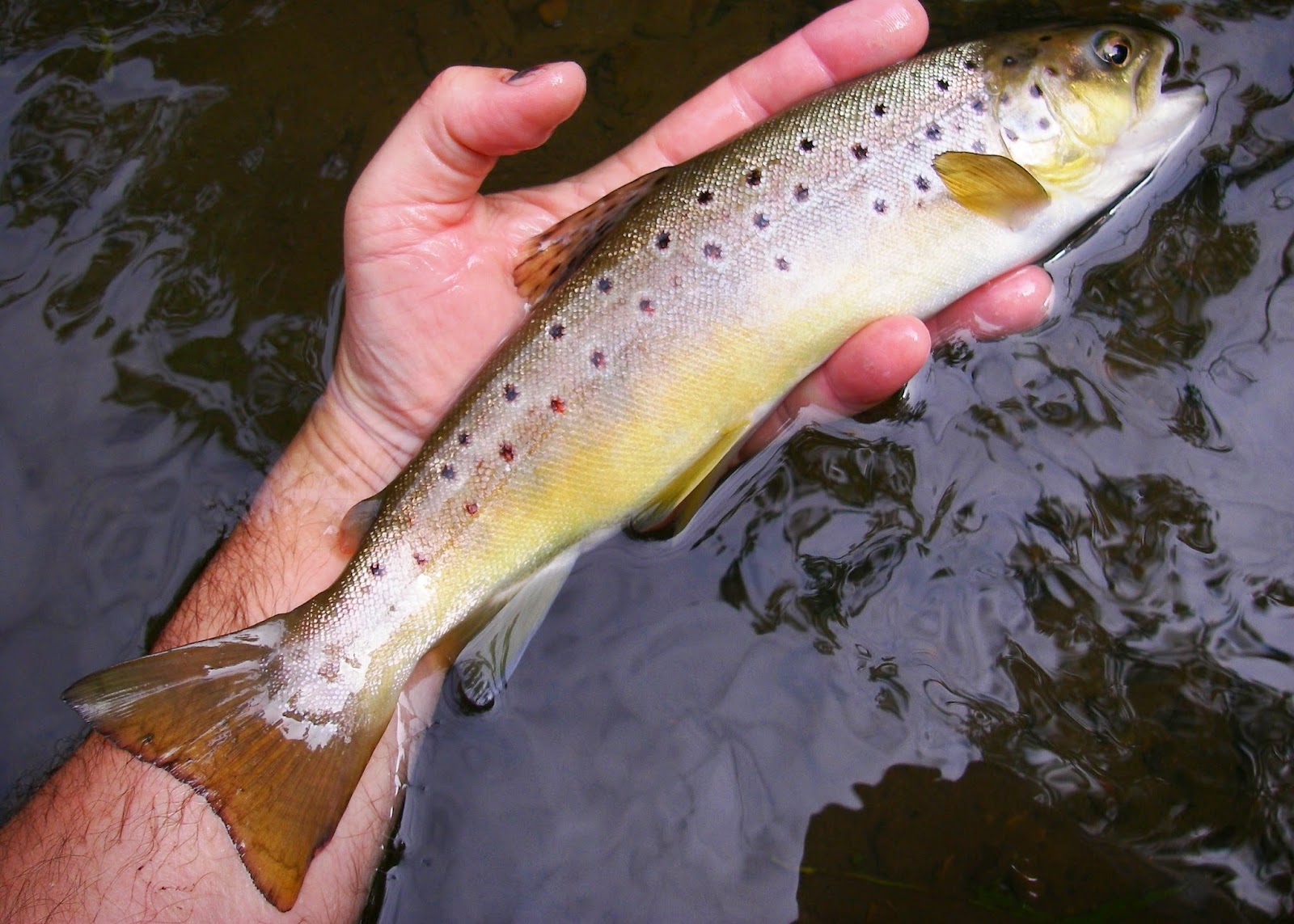 Last spotty of the year?

Reached the upstream limit without any further action and bid the river goodbye, thrashing my way back up to the road through the Himalyan Balsam. With no (or very few) grayling in the section I suspect it'll be April before I'm back again. However, I've certainly enjoyed having the river to myself over the last few weeks. 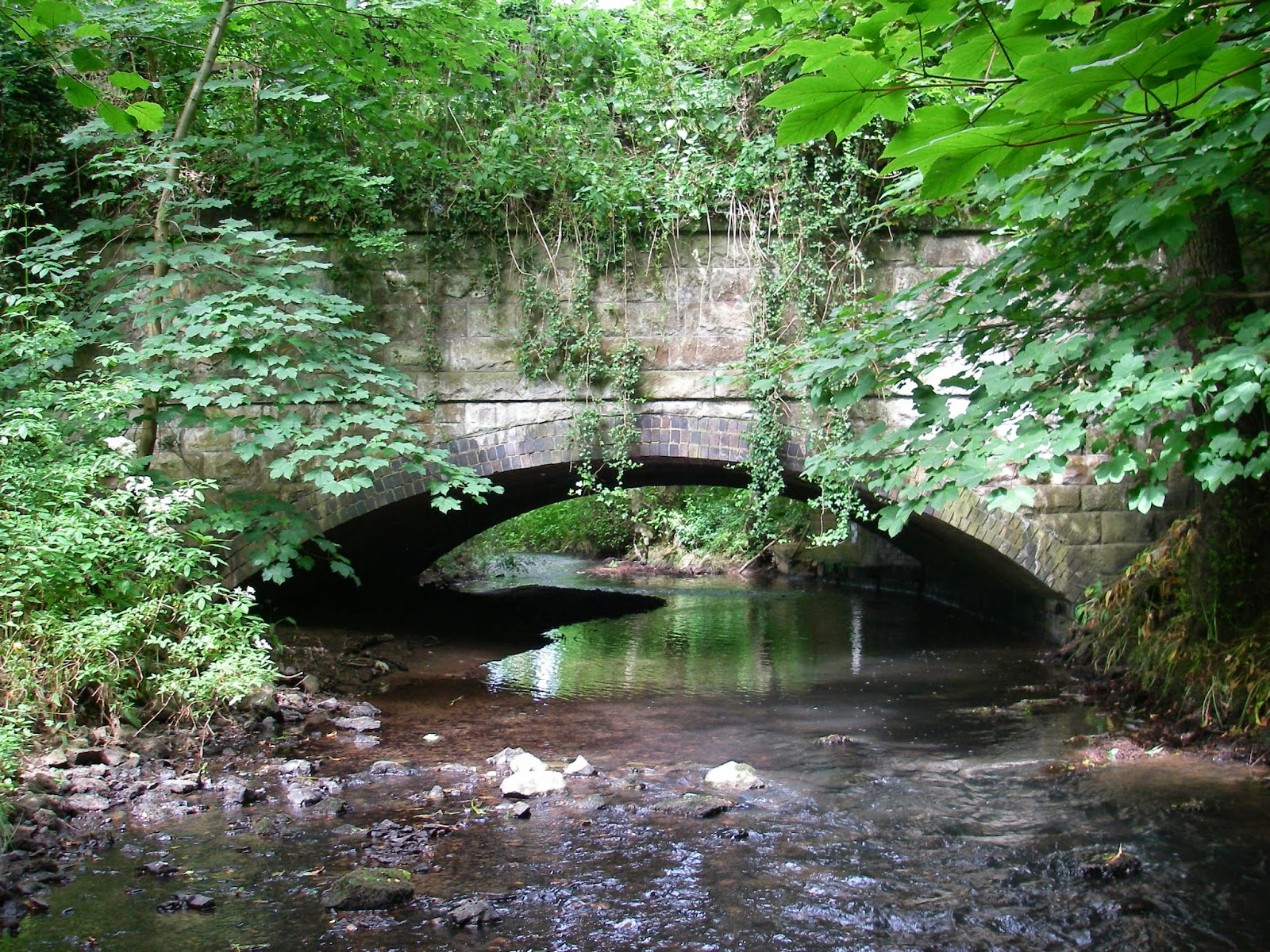 What to do next? Choices, choices!

Decided I'd have a couple more sessions of trout fishing before tackling anything of the non adipose fin variety, so took the morning off work and headed back to Derbyshire bright and early. Skirting the maize field it looked as if the lapwings had been successful this year, with two adults and four scruffy, brown juveniles circling and calling overhead. Found the river low and clear in contrast to my previous visit. Again, whilst there was the odd sedge and mayfly knocking about, there was no obvious fish movement, so I stuck with the nymph approach. Had plenty of rattles and knocks from the off from small fish and eventually manage to hook one of the little beggars. 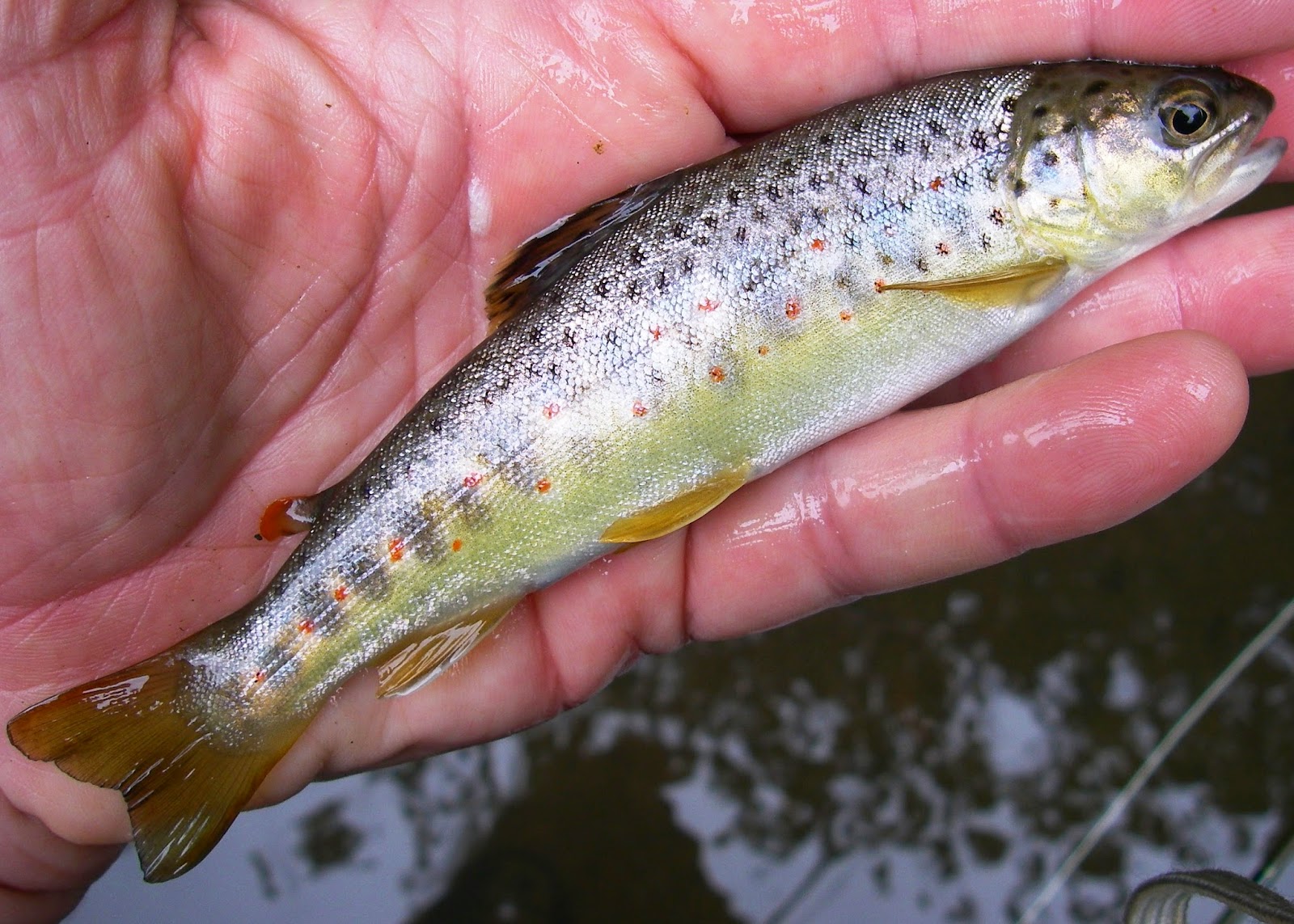 Worked slowly upstream and caught a couple more tiddlers in the faster water, but failed to connect with anything more substantial in the deeper pools. There were a lot more prints in the freshly exposed mud at the side of the river, which made me think perhaps that Mr Otter had been active recently and sent everything to ground. 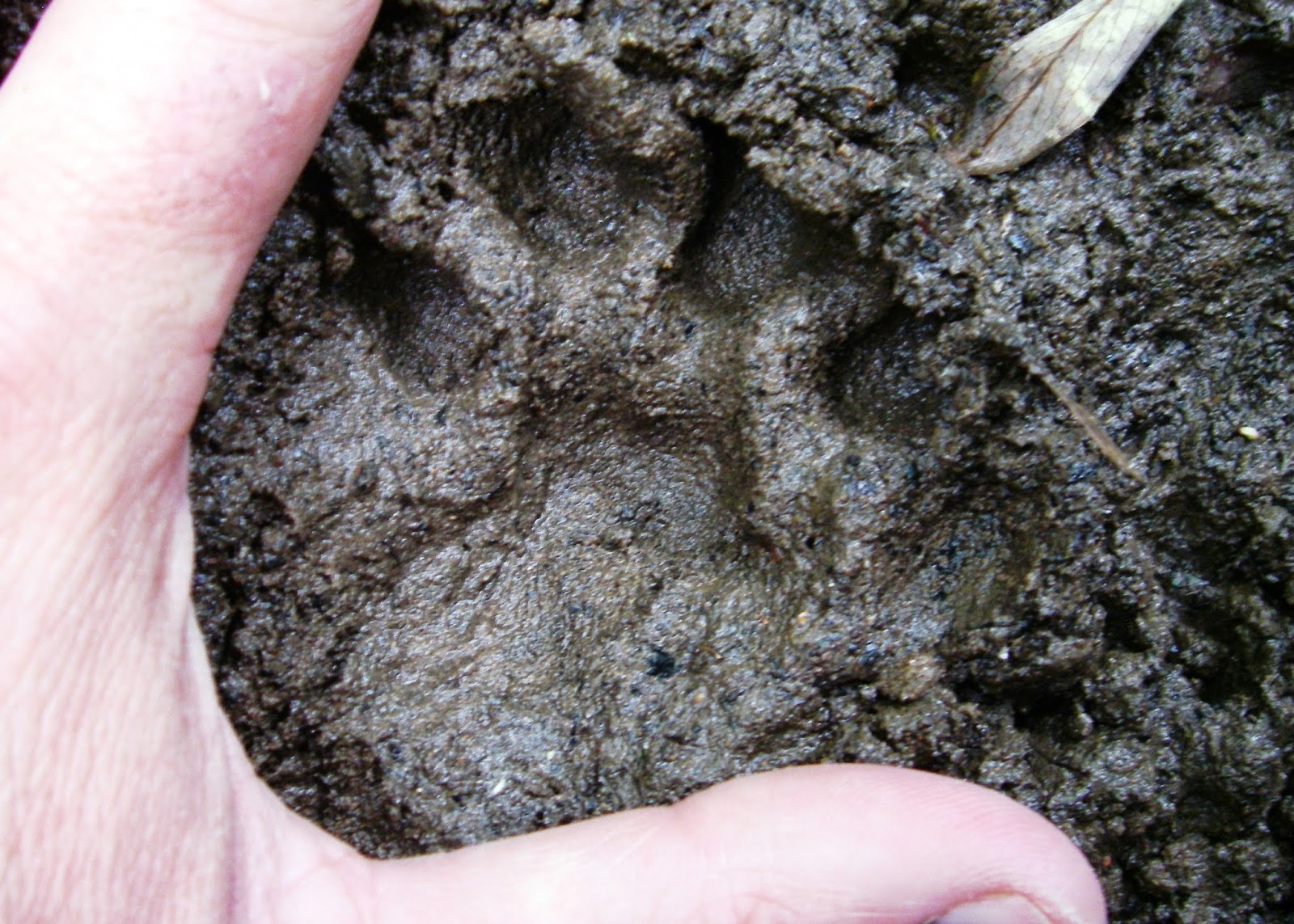 A bit further on I found a partially eaten (or regurgitated?) crayfish, which seemed to support that idea. 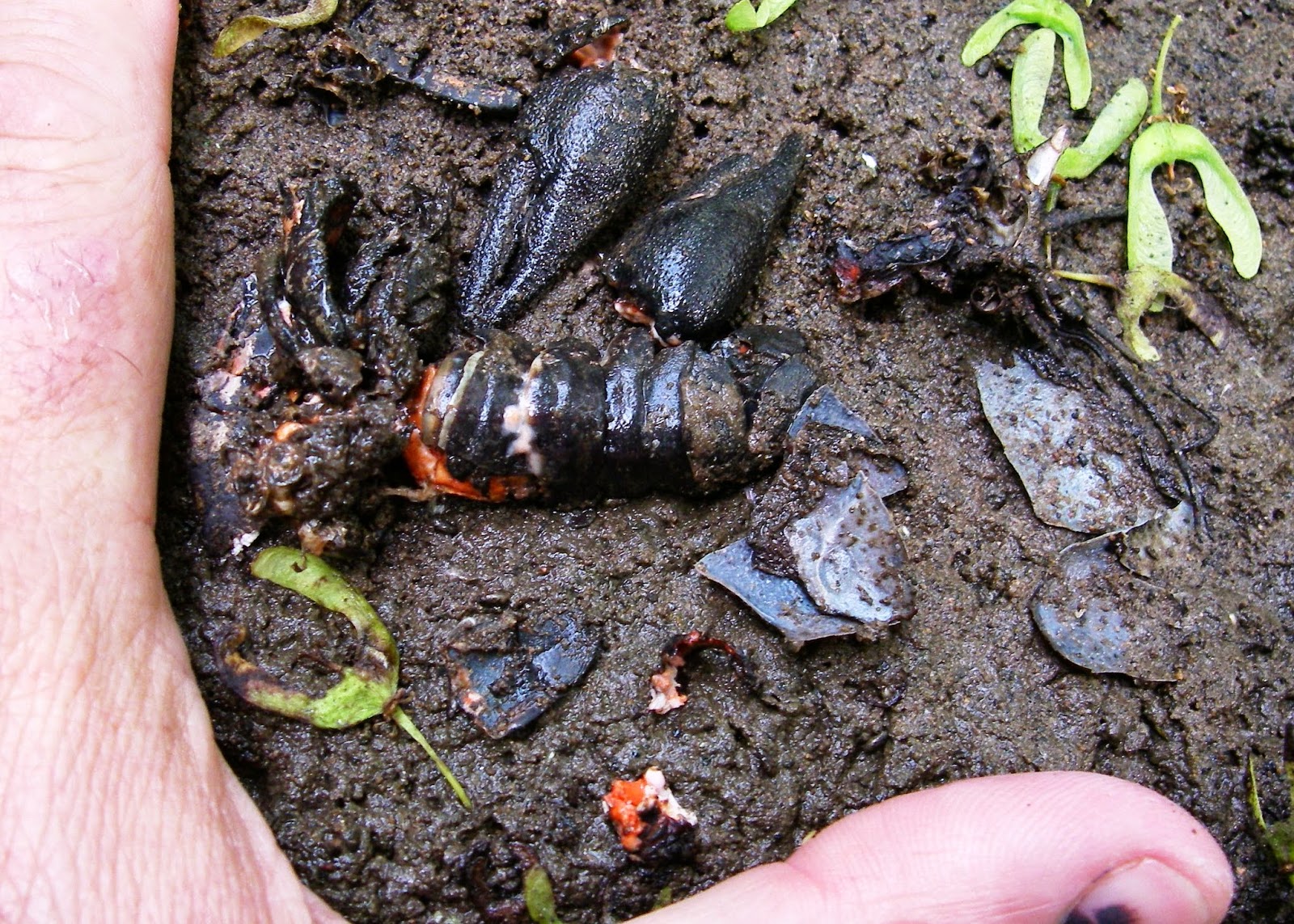 There was also evidence that somebody else had been fishing the section other than myself - a fly on a length of nylon hanging from a branch over a little pool. Inexcusable not to retrieve it on a river this size unless they were fishing in their slippers! Soldiered on and lost another small one that went absolutely bonkers airborne, throwing the barbless hook, before getting a couple of bigger fish. However, still not the stamp of fish I'd had on previous visits. 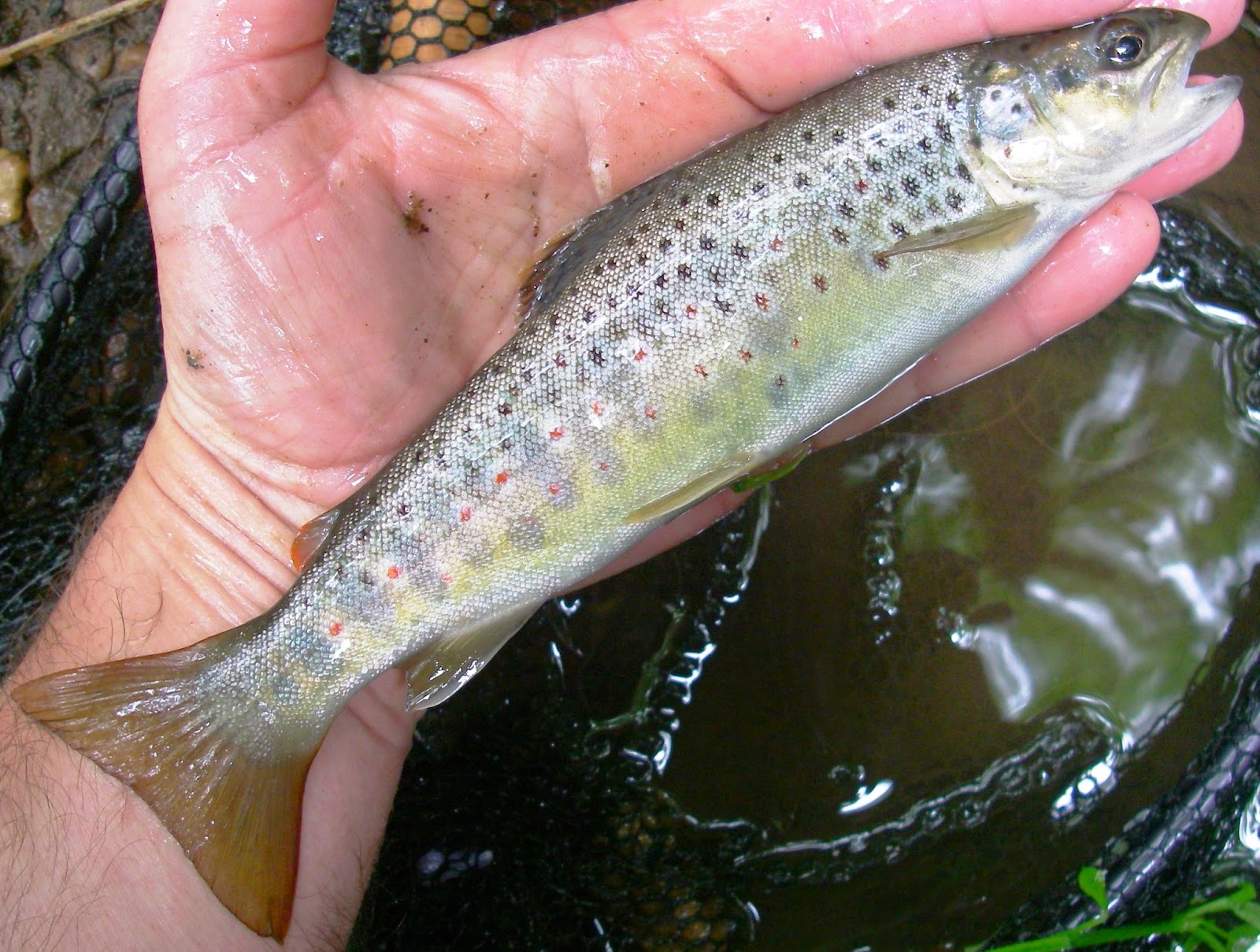 My one chance of a better one came when I had an immediate take from a fast run alongside a mass of tree roots. Needless to say that's where the fish headed for like a flippin' torpedo as soon as I hooked it and where I had to retrieve my hook, minus trout, about thirty seconds later. Doh! Was well up towards the top of the section by now where natural ochrous springs are in stark contrast with the ferns and mosses on the steep banks. 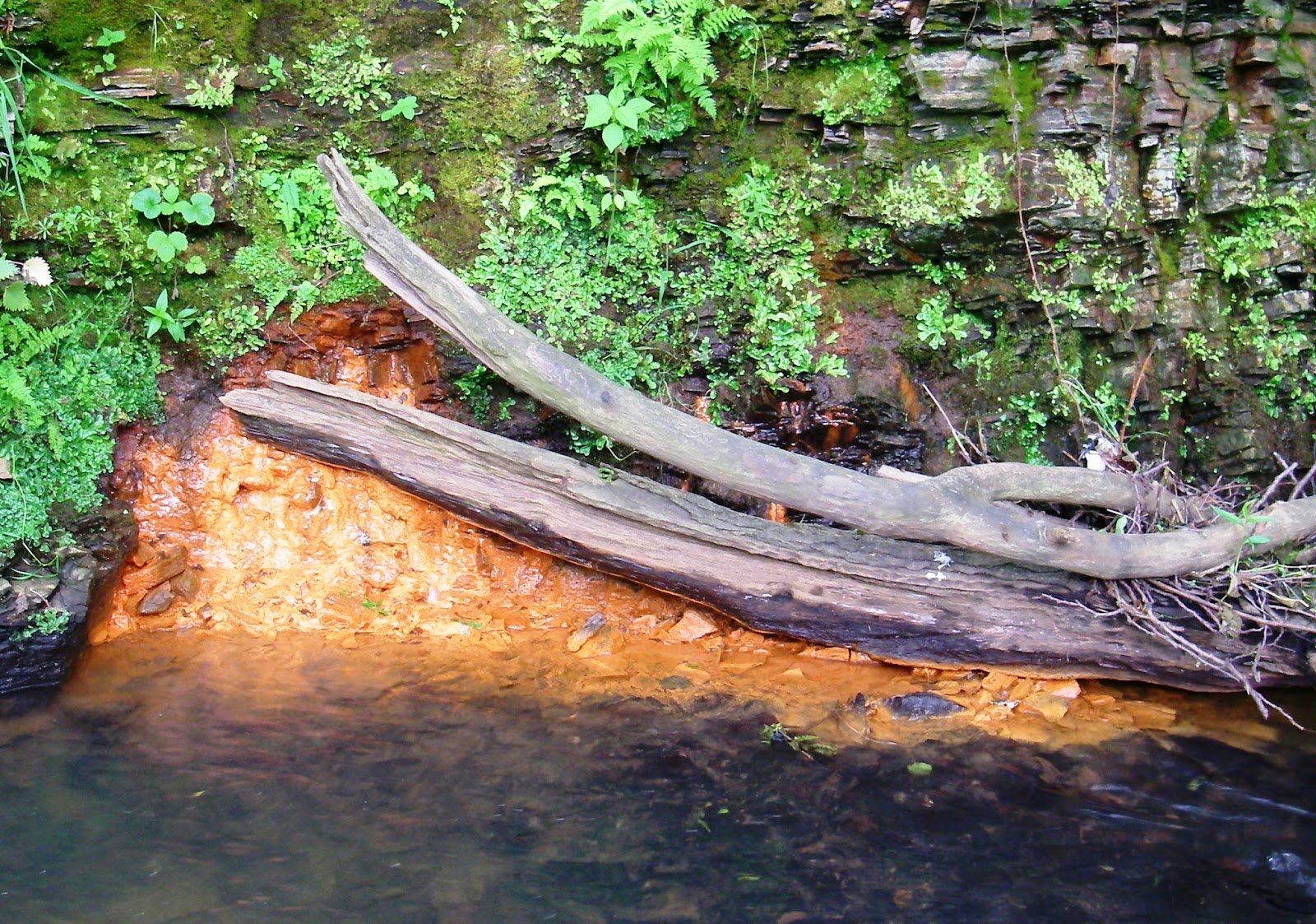 Had one more and the best of the day, casting up into the branches of a fallen tree grounded in the shallows. 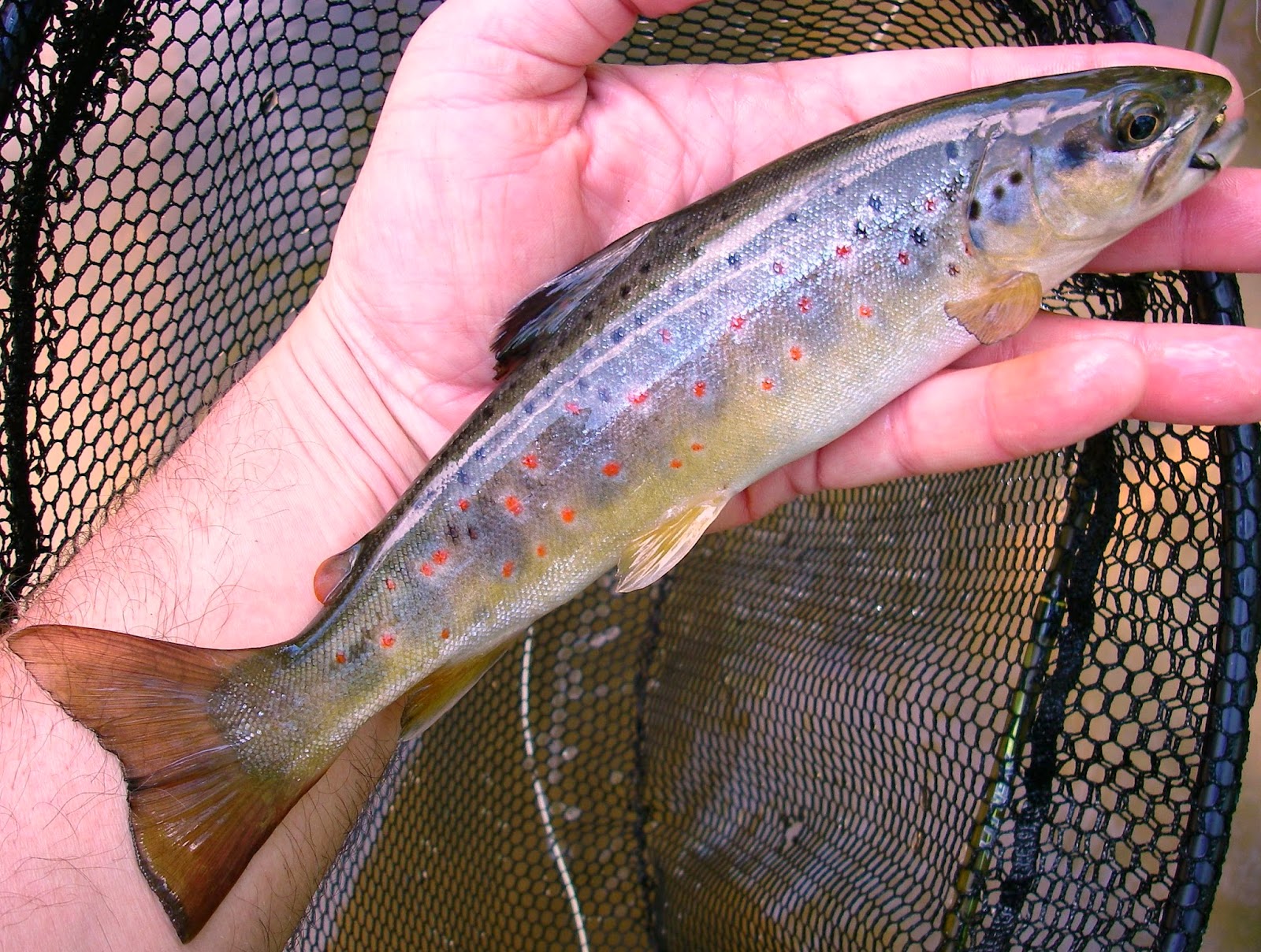 Last, but not least

Had a quick look under the bridge at the top of the section and found a mass of prints in the mud - obviously an otter "des res" -  before slogging it back along the road, dodging death by quarry lorry and nutters in 4x4's.
Posted by Toodle No comments: 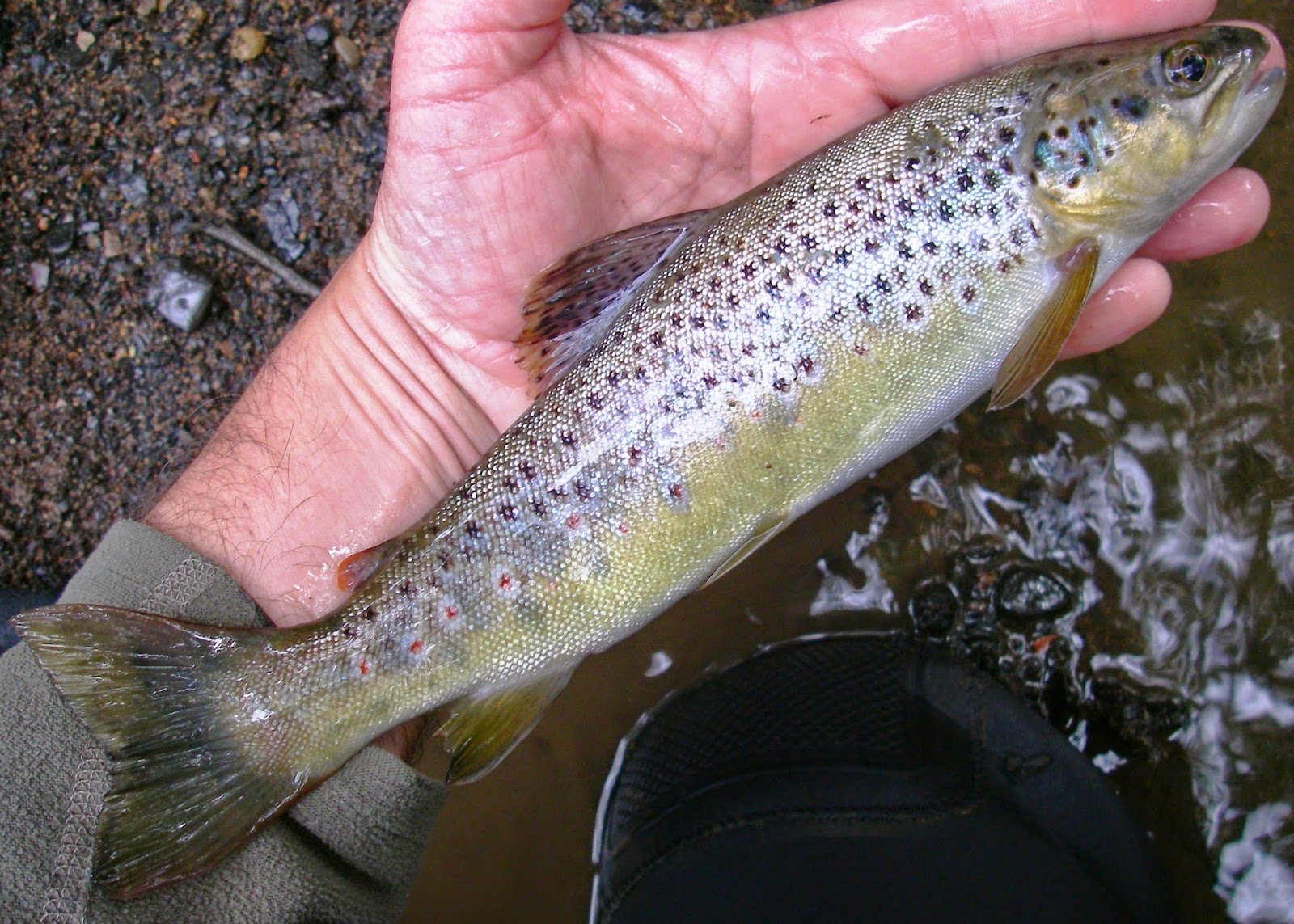 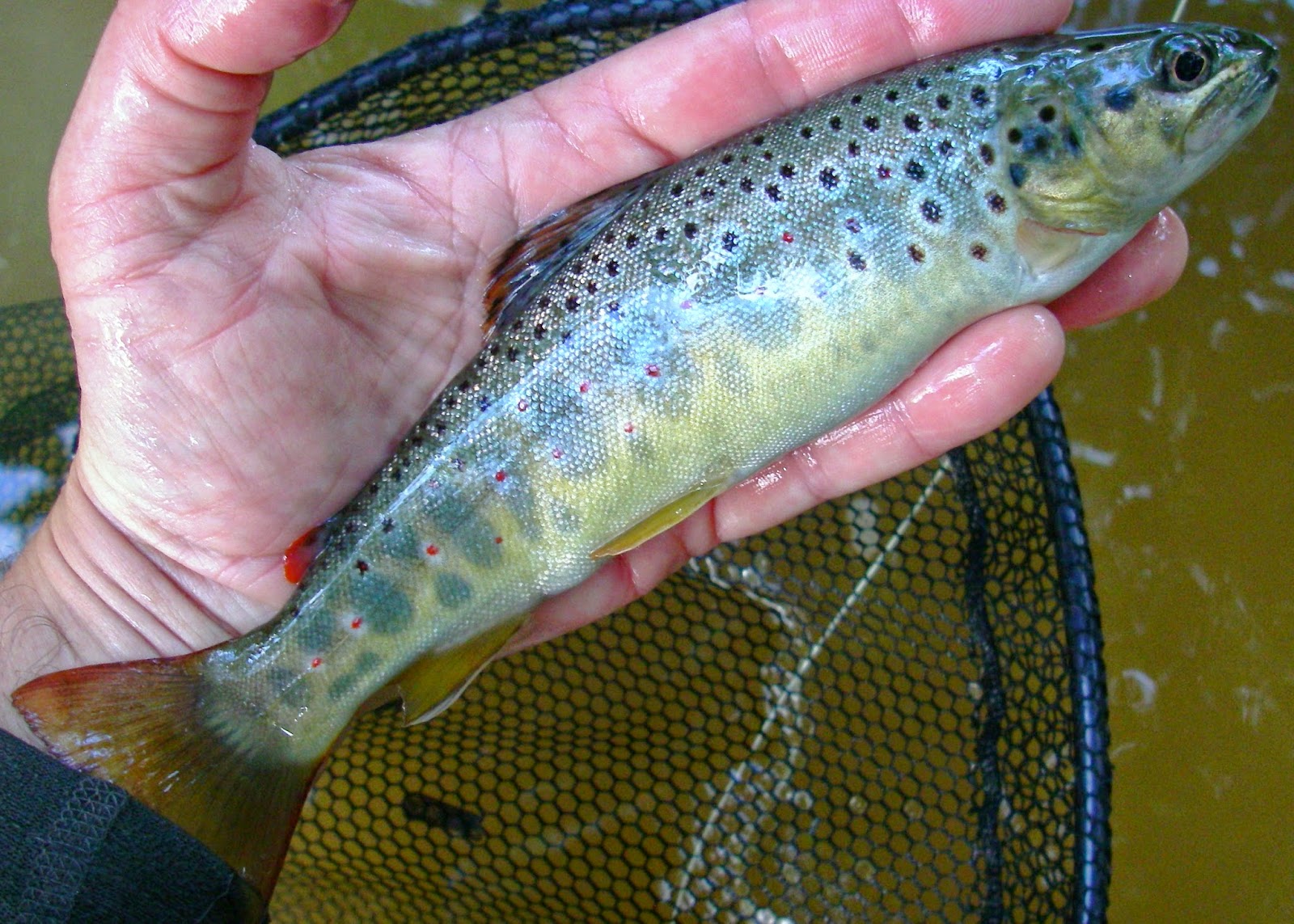 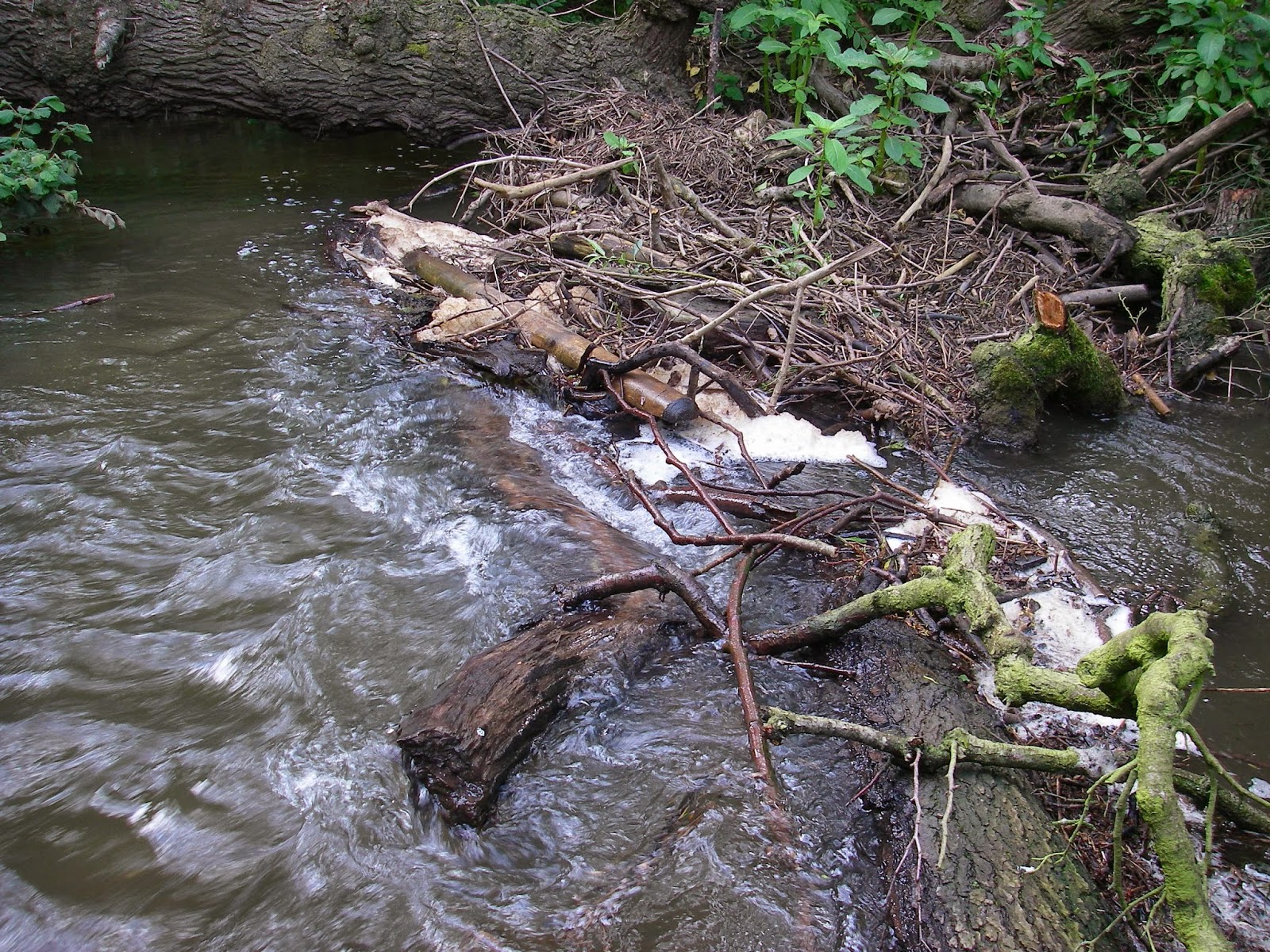 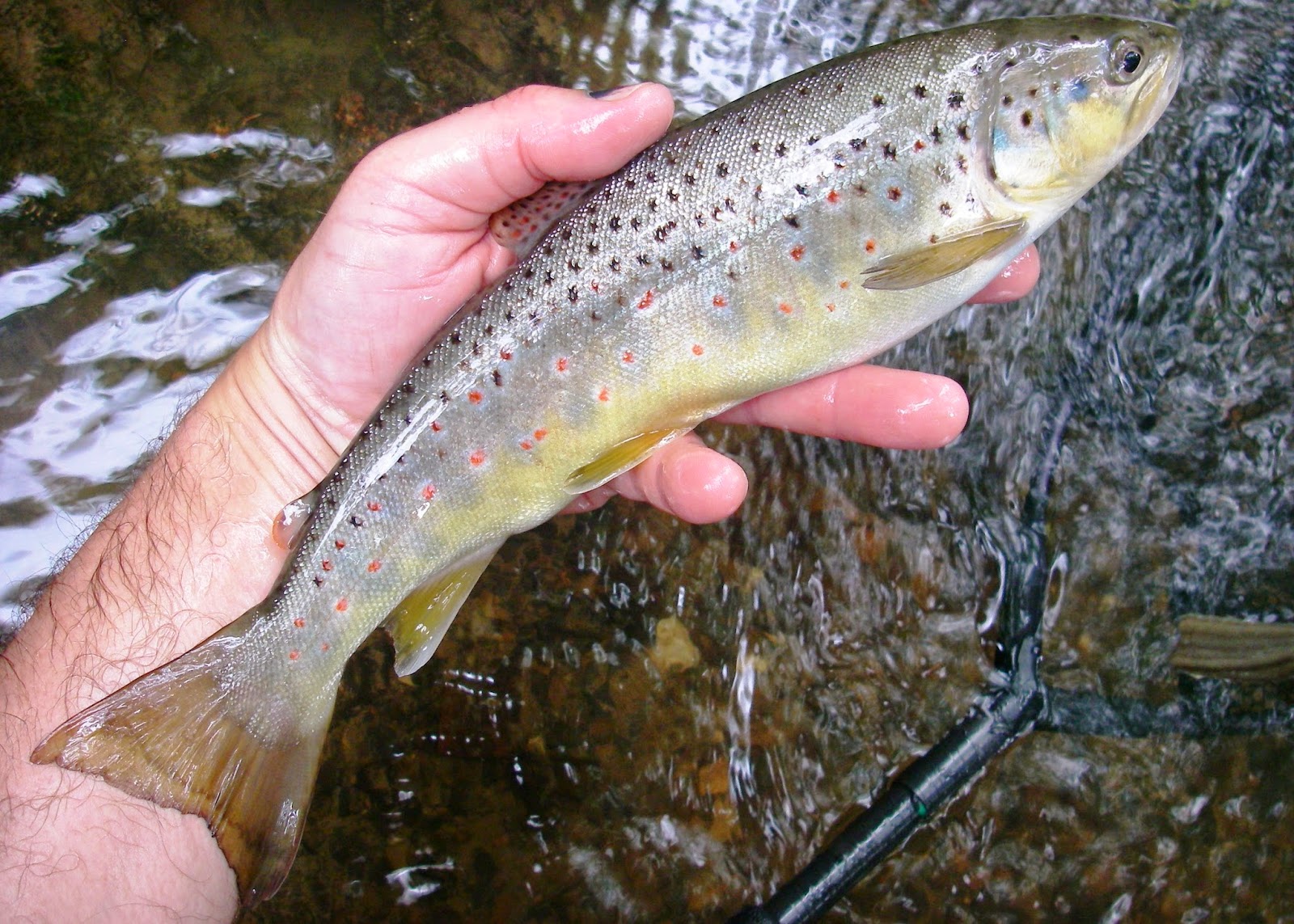 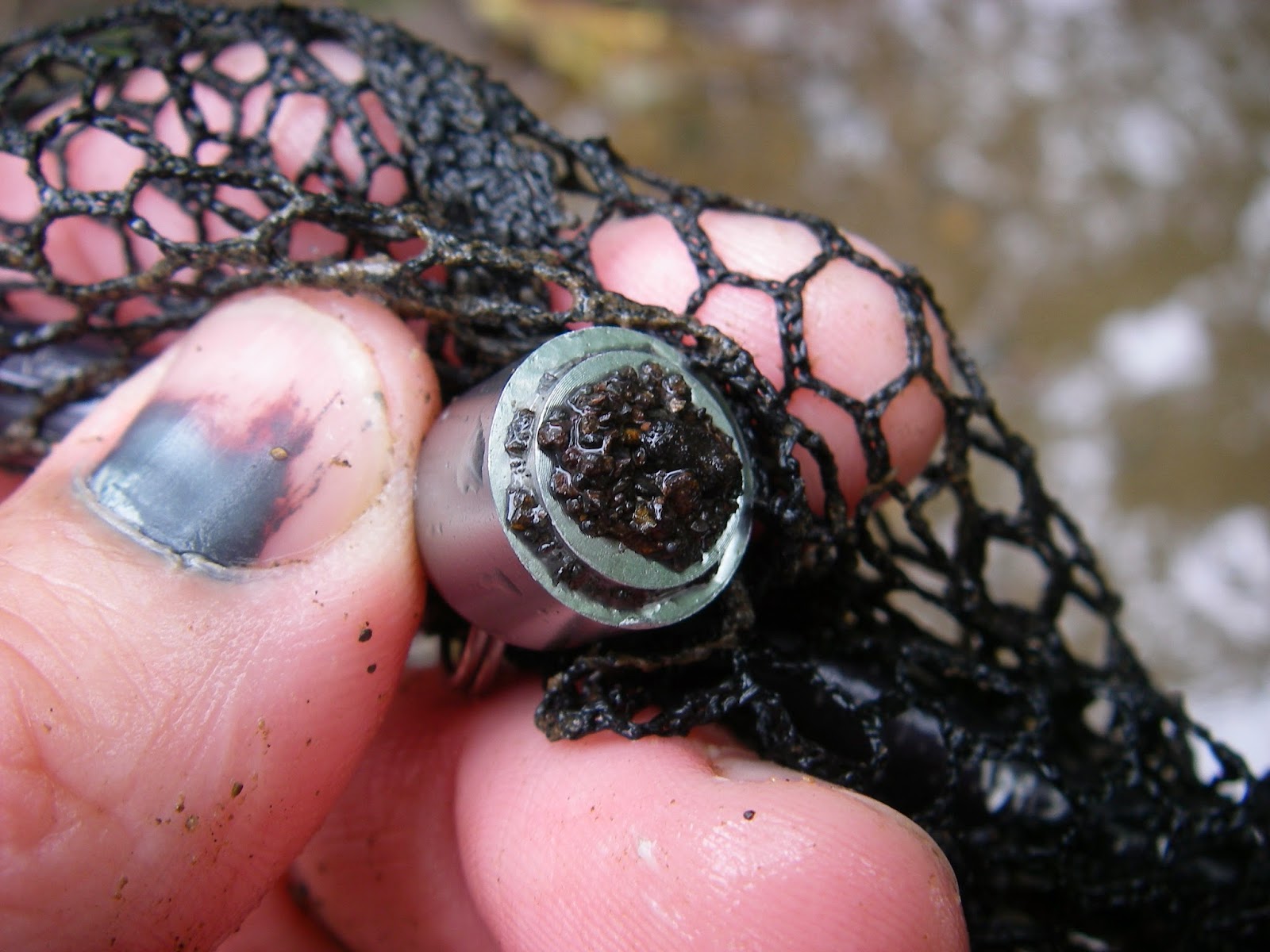 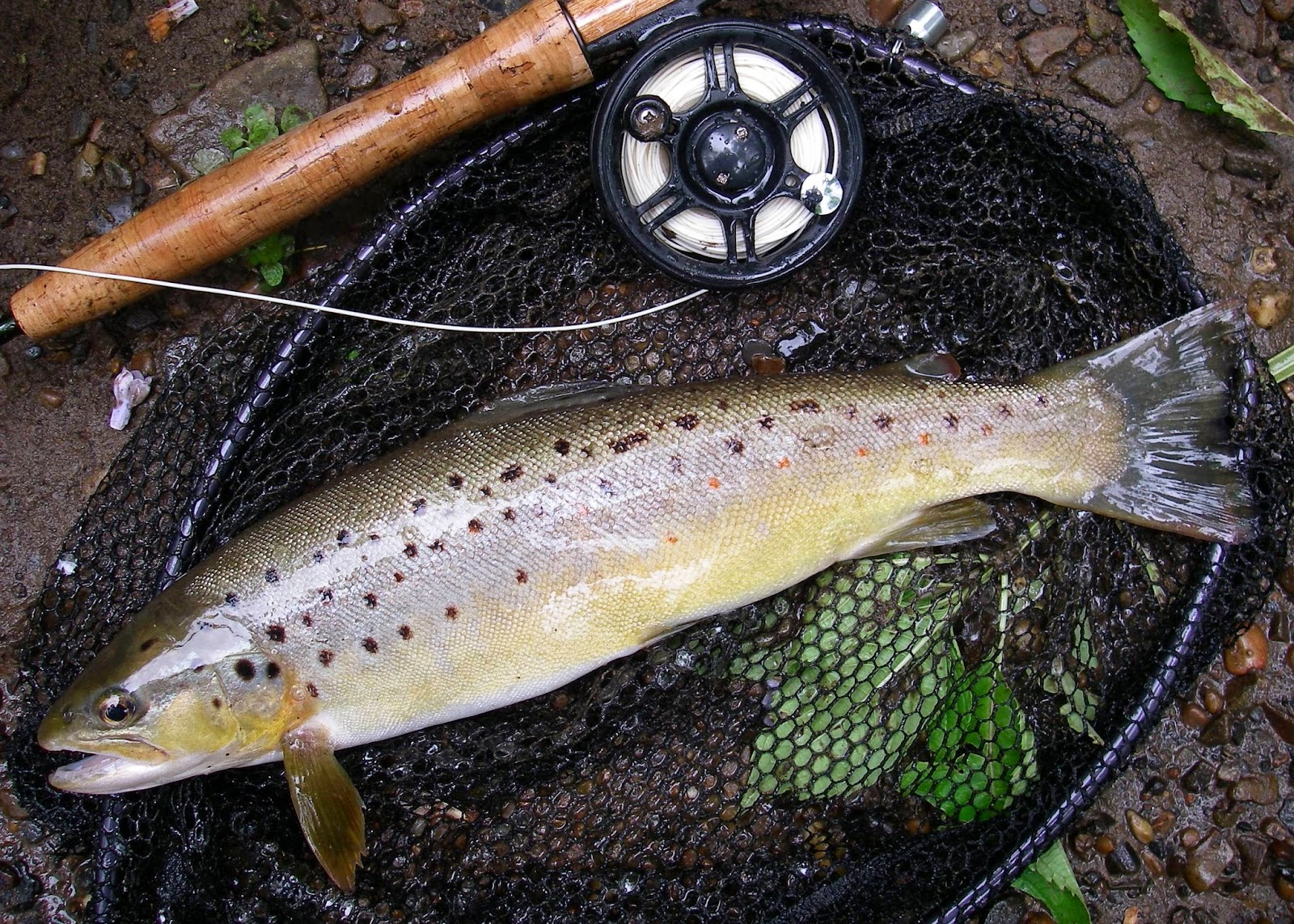 Lost another to a hook pull (aargh!) in a fast run before reaching the road bridge and the boundary with the next club's water. Had learned a bit more about the river whilst sharing it with the dippers, kingfishers, wagtails and possibly an otter judging by the footprints in the mud under the bridge. Also decided after this session that a collapsible wading stick would be a good investment after a) falling on my arse tripping over hidden debris and b) stepping off a ledge into a coloured pool and finding the water a bit too close to the top of my chesties for comfort. Oh yeah, and a hook sharpener! Will have to get my order in quick for Fathers' Day......
Posted by Toodle No comments:

Been finding as I get older (!!) that I'm less inclined to drag loads of gear with me when I go fishing. I suppose that's why trout fishing has regained its appeal, especially on small streams where all I need are my fly rod, landing net and a small sling bag to carry my bits and bobs. I'm also loathed to travel too far as distance = time + money in my eyes, neither of which are in great abundance nowadays! Fishing local and light means I can fit in short sessions as and when, as was the case today. Had a morning meeting down in Leicestershire, so left home a few hours earlier and headed for the small brook I'd had a couple of sessions on last year. This time I'd arranged prior access with the farmer, so I wouldn't be looking over my shoulder all the time! Arrived to find the brook running low and gin clear. With the sun rapidly coming up it looked like it might be a bit of grueller and so it turned out. Had a "bump" first cast, but then had nothing for the first hour, despite covering lots of ground and all of the usual spots. Was having to fish blind a lot of the time, because when did pop my head over the marginal vegetation all I saw was a puff of silt and a rapidly retreating bow wave heading upstream! Was beginning to get a bit frustrated when I dropped the nymph into a near bank run and got a proper rattle - fish on at last! 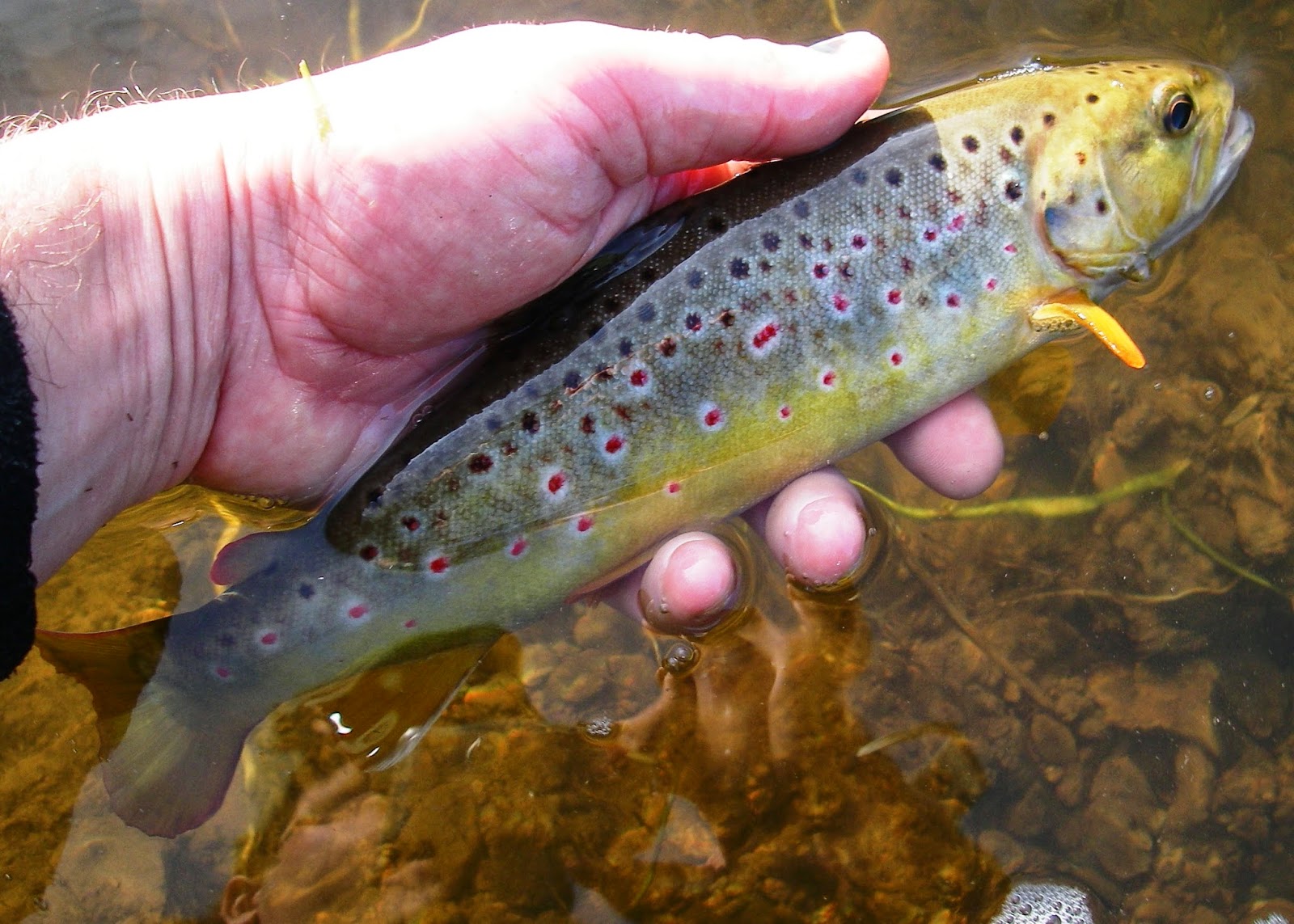 Eventually came to the "banker" pool, but even that was a bit dour today. Only managed to tempt one small, but very pretty, fish out of it. 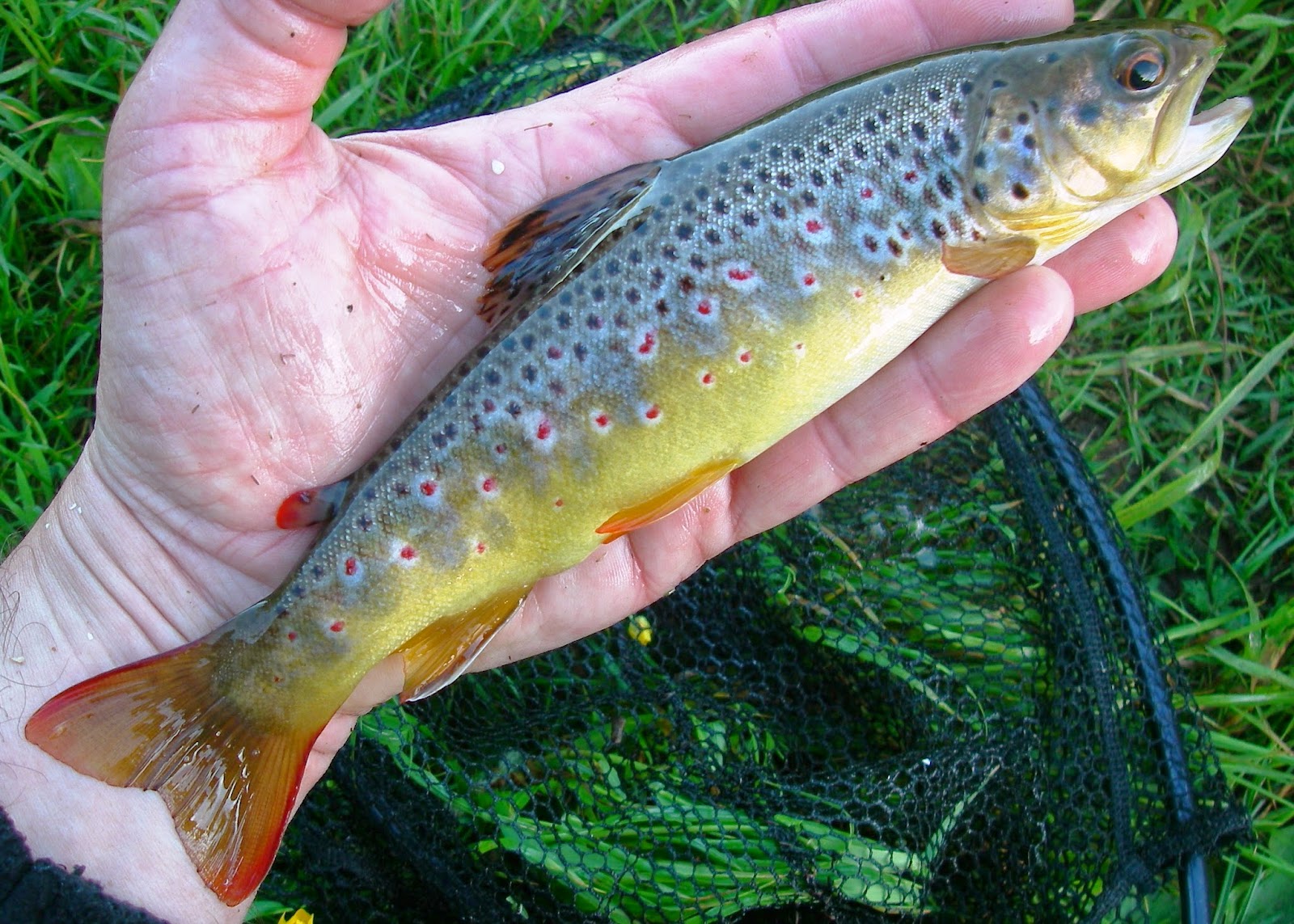 What a handsome fella'

Had not ventured past this point on the brook before, so went for an explore and spotted a fish holding station in a shallow run. However, I surprised to see that it was a roach. He looked like he'd had a run in with a heron, so I left him alone and carried on upstream to the next pool. First cast in I saw a a big white mouth open to intercept the nymph as it drifted downstream. Gave it some welly to get it out of the pool and away from snags. Was a really good big, dark fish and I could see every spot on it as it charged around in the clear water. Was getting ready to net it when the hook popped out with the fish just out of range - aaargh! Changed the fly and disconsolately dropped it in again. Was surprised to get another take and even more surprised when it turned out to be a little perch. 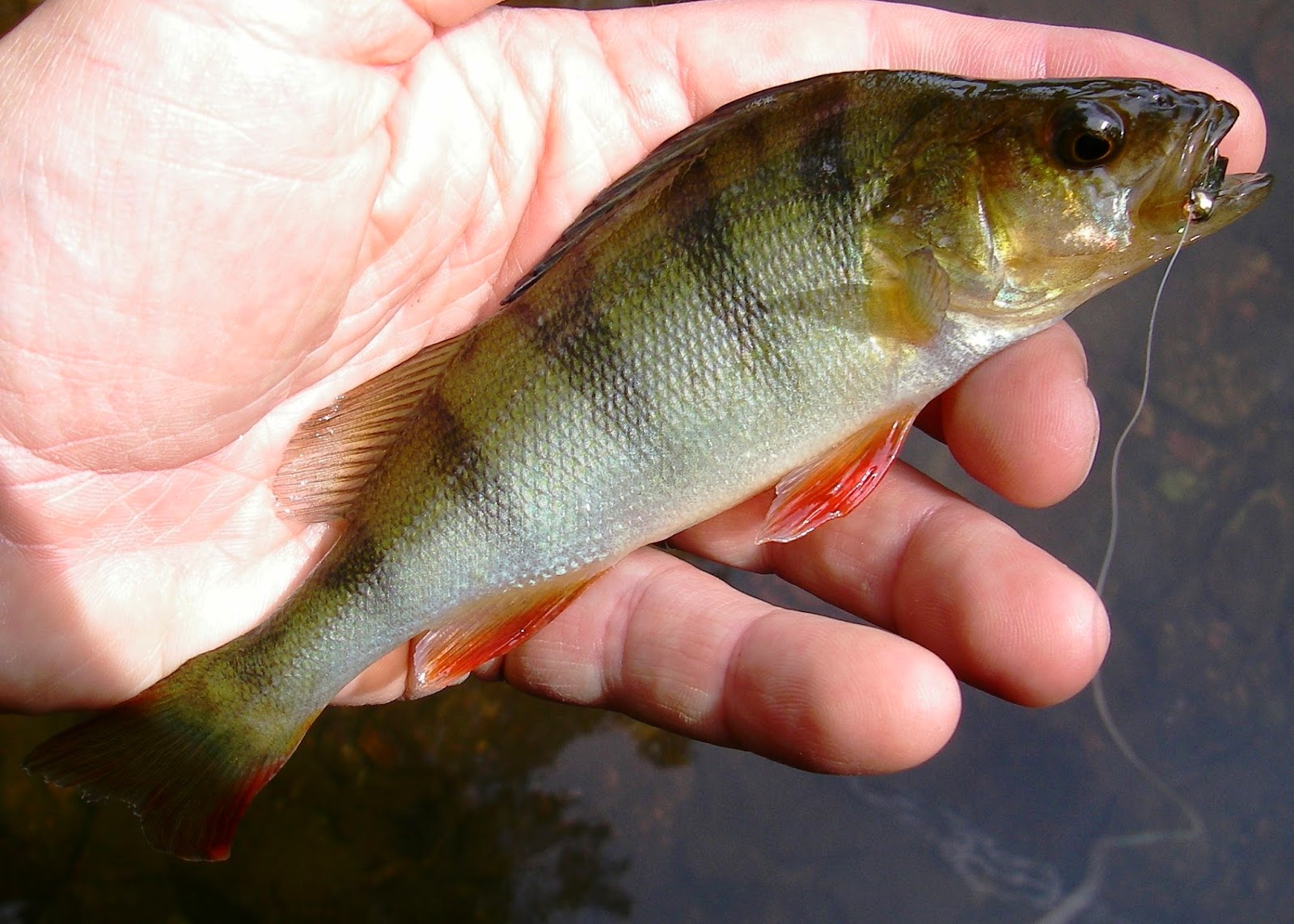 Was running out of time by now, but one more pool under a tree beckoned. The cast was bit awkward, but I managed to flick the nymph up into the deeper water - bang!  Was a nice, densely spotted fish that gave me a good run around in the confined space and a decent consolation for the one I lost. 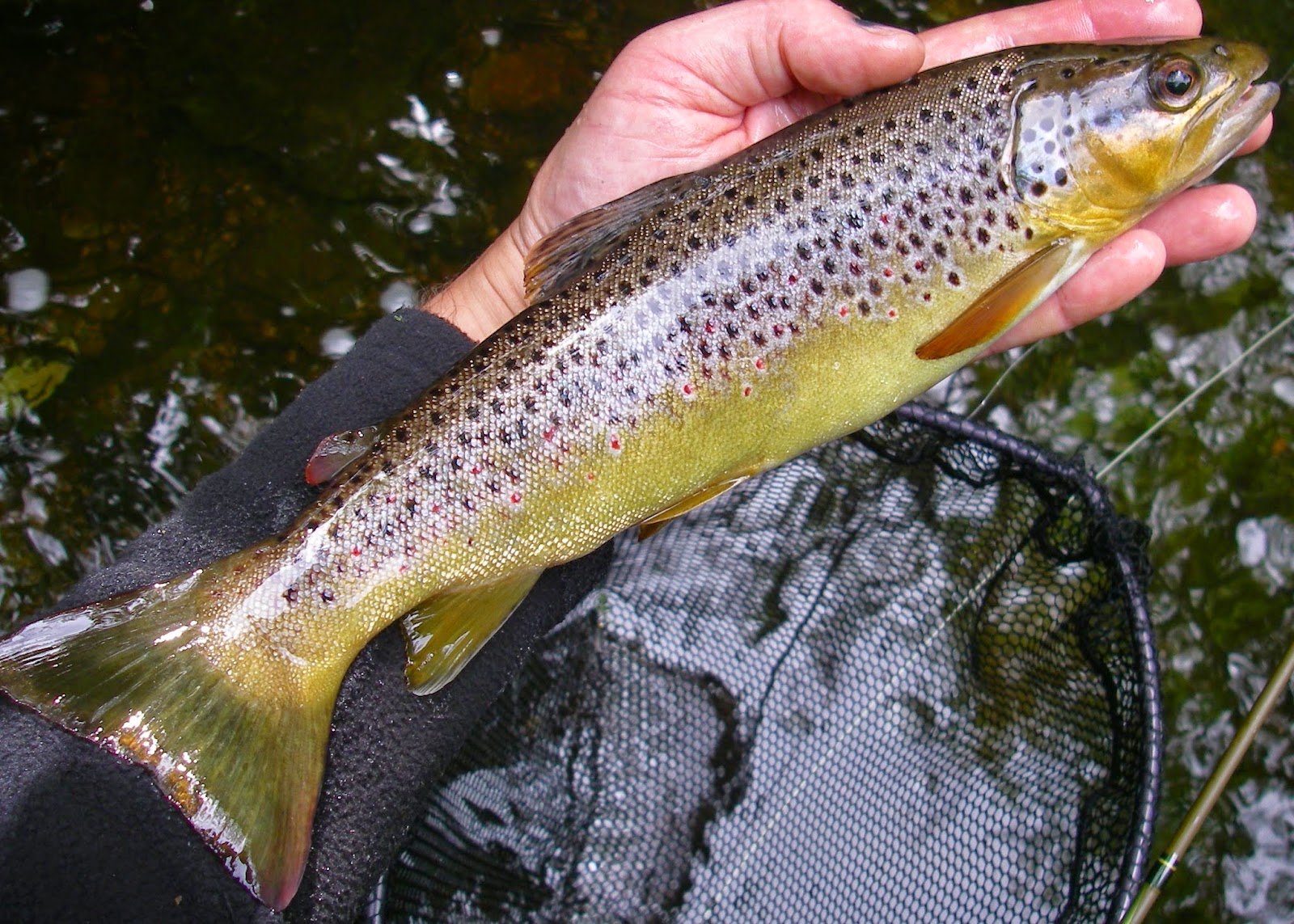 That one really did call time on proceedings, so it was back to the car and back to the grindstone....
Posted by Toodle No comments: