I'm lucky enough to live within spitting distance of several canals, but have never really paid them any attention in the close season. However, this year my intention is to have a good go at them with my light lure outfit. All of them, with the possible exception of the Erewash Canal, now give a good chance of a zander along with the usual suspects of perch, pike and chub. In fact I've entered into a bit of a competition with my mate Tim to see who can achieve a predator "grand slam" in a single session. We'll have to see how we get on with that! Today I had a couple of hours free after work, so stopped off at Kegworth Cut. To call it a canal seems a bit grand as it's basically a very short section of navigable channel that by-passes Kegworth Weir and is only separated from the River Soar by a long thin island. Anyway, the club book says it's open all year 'round, so that's good enough for me! 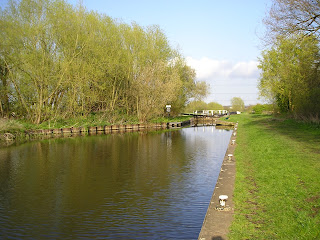 The Cut
Started at the downstream end where there's a wider section where boats moor up before going through Kegworth Deep Lock. Was using the "Big Hammer" shads I got from AGM Products. Second cast up into the lock itself with a 3" shad in pearl resulted in a thump on the rod tip and a fish that briefly thrashed on the surface before coming off.  A few casts later I had a take under the rod tip from a little jack. 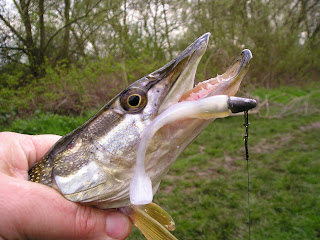 First blood to the "Big Hammer"!
﻿Had another one of a similar size from the basin, then winkled his brother out from underneath the only boat moored on the section. Upstream of this point the canal was pretty featureless, so after a few half-hearted casts, I was soon back down near the lock. Had a little perch follow a minnow pattern, so cut the shad back by an inch and mounted it on a smaller jig head as recommended on the AGM Products website. Unfortunately that seemed to be that as I couldn't buy another take. Nice to be out though, even if it was just a couple of snatched hours.
Posted by Toodle 3 comments: