Decided a change was in order after struggling a bit for the grayling, so dusted off the pike gear, emptied the freezer of dead baits and headed to my local River Soar. Got there for first light, but in contrast to the previous few mornings it was dull and overcast, with a bit of mist in the air. 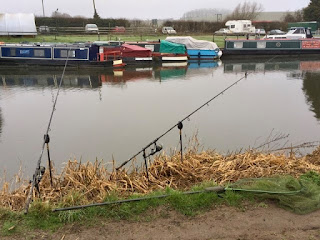 Before I'd left the house I'd chopped up the more tired-looking of my dead baits and as I walked upstream I flicked the pieces into the near-side margin, hopefully to act as an appetiser to the main course that would come later. River had been over the top of the flood wall not so long ago, but was well down and with no sign of the extensive beds of pennywort that were present on my previous visit - probably now all in the Humber! Visibilty in the margins was also good. Got both rods baited up, one with a smelt and the other with a joey. 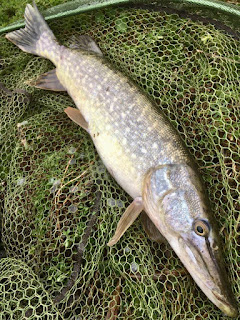 Intention was to use the downstream rod to fish the near-side margin and the upstream rod to search between mid-river and the boats on the far bank. Got off to a slow start and had moved the rods around a couple of times when I saw a another car park up at the end of the lane. Watched the occupant start lure fishng downstream of me and a couple of casts later he was into a fish! However, didn't have to be envious for long as the float positioned mid-channel bobbed and then headed off, resulting in my first jack of the morning. By this time my fellow angler had walked upstream to say hello - turned out to be one-time fellow blogger and member of the Soar Valley Speciment Group, Leo Heathcote. Had a good natter before he headed off to try a little further upstream. By the time he returned a bit later neither of us had added anything to our respective tallies. However, shortly after he left I had another pick up over near the boats. 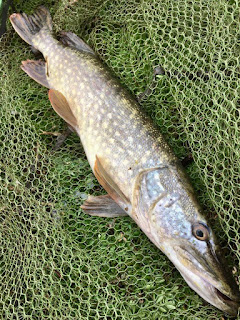 Unfortunately the bait was dropped before I could wind down, something that would happen a few times throughout the morning. Had another small one down the nearside before the float in mid-channel went off again.This is an area that I have neglected in the past, always concentrating on the margins, possibly to my detriment. Wound down and felt an obviously much better fish that actually took some line off the reel on its first dash, but after a few seconds the hooks pulled! Found that two of the points on the top treble had opened out. I'd had to bend them back into position after the first fish did a crocodile impression and had caught the hook in the net, so they were obviously weak and had probably cost me a decent pike. Needless to say I changed the trace after that. Carried on leapfrogging the rods back downstream and had a couple more before the wind started getting up. 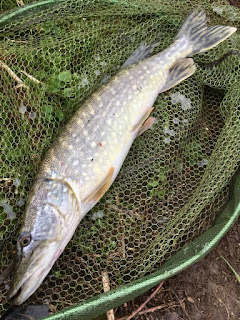 Blowing straight upstream it was making it difficult to see the first indications on the float (usually I'm onto the rod at the slightest knock and feeding line off the reel), which again cost me a couple of fish as the increasing tension on the rod tip before the line pulled out of the clip was apparently enough to make them drop the bait. By the time I'd got to the end of the section I'd had a total of six pike, but I wasn;t happy with the lost fish and dropped runs. Even those I had landed were only lightly hooked by one of the two trebles, so they were obviously being a bit finnicky. Luckily they had all decided to come in like wet sacks! With about 15 minutes left before I had to leave for lunch I popped a mackerel over to the far bank and a lamprey down the margin. A few minutes later the mackerel developed a life of its own as it headed downstream. However, before I could wind down the bait was dropped yet again! 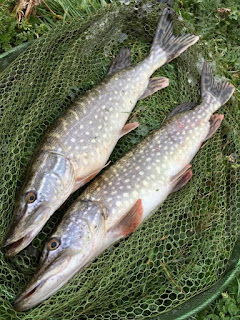 Popped the now mangled mackerel back in the same spot only to have the float waddle off once more. This time I managed to set the hooks into a fish that gave a good scrap for a change, all the time me thinking I was going to lose it. Had just unhooked it in the net when I heard the indicator on the other rod hit the back rest and the bite alarm start shrieking. Luckily the fish on the end of this one wasn't giving up its prize and was on its way to the Trent! After another spirited scrap I had him lying side-by-side with his companion in the net.That mad few minutes had not only served to flatter the scorecard, but had also pushed me well into borrowed time, so I didn't find out whether that was the start of a bit of a feeding spell or I'd found a group of fish. I'd almost exhausted my bait supply anyway, so chucked everything back in the car and got home just in time for a bite to eat before my first work call of the afternoon.
With regards to those fussy pike, there's an interesting article by Dominic Garnett here, which suggests that we have created the most cautious generation of pike fishing ever through relentless fishing pressure. Food for thought, but the old saying has always been that pike thrive on neglect. Unfortunately there just aren't any wild, pristine venues in my neck of the woods, so I'll just have to up my game next time!
Posted by Toodle 2 comments: