Despite the glorious weather over Easter itself, previous rain meant that the rivers were up and carrying a bit of colour when we arrived in Wales. Trout fishing was therefore put on hold until the last day of the holiday. Whilst the river at my "free" spot was still a bit above normal level, it had cleared considerably. Unfortunately, the sun was already off the water when I arrived in the afternoon - blocked off by the steep, wooded hillside - so it felt distinctly chilly in the downstream breeze when I slipped into the water at the top of the stretch. 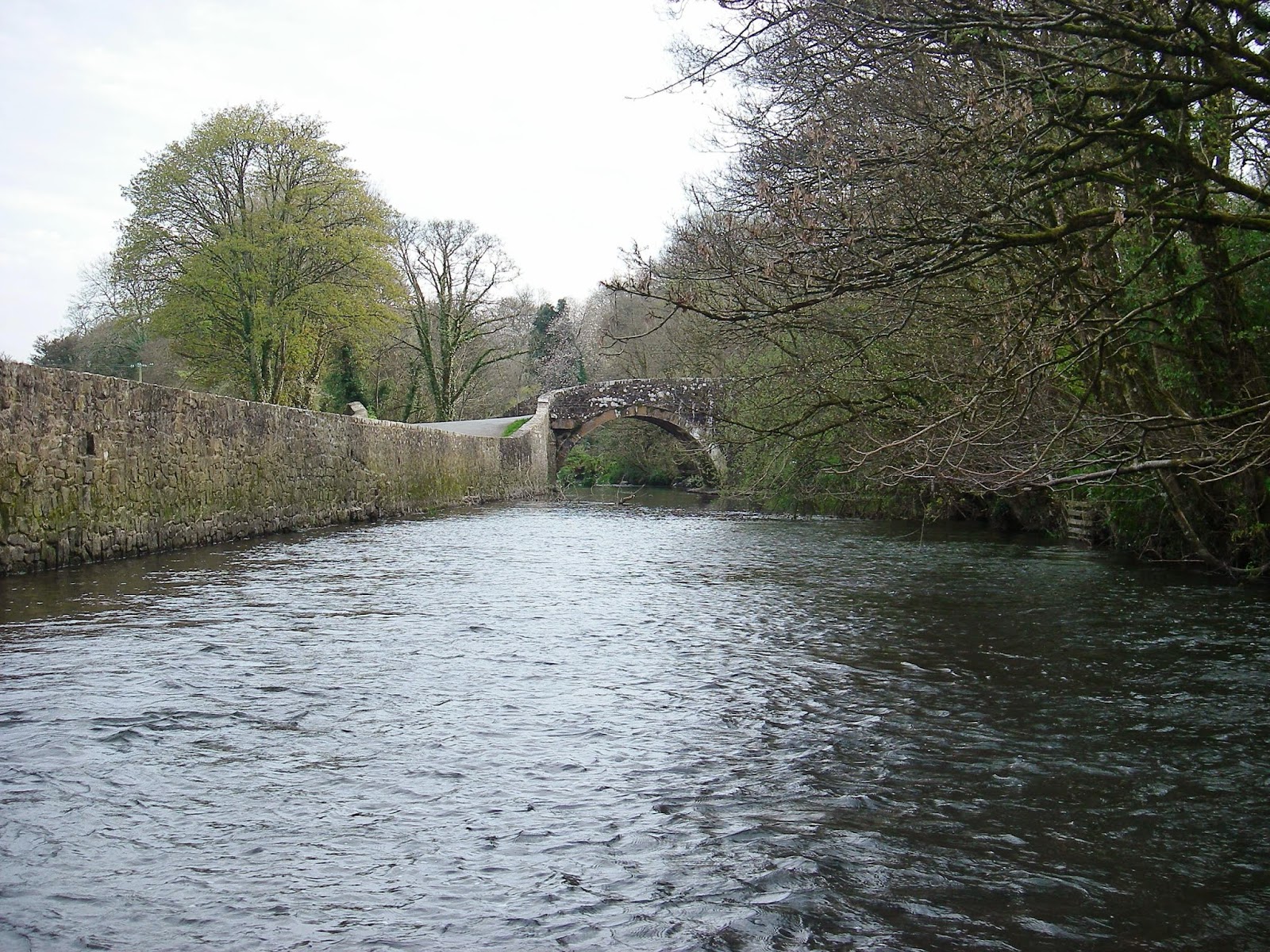 Had got my normal three fly cast on with a goldhead on the point and two spiders on the droppers. Had a few casts, but didn't feel the flies were getting down quick enough with the extra water. Luckily, I had a fast-sink leader in the bag - a freebie off the front of Trout Fisherman ages ago - so after a quick re-tackle I was fishing again with a bit more confidence. However, apart from a few, quick rattles, I was half way down to the bridge before I had my first fish on the point fly. Just a little one and covered in fish leeches. First time I'd ever seen them on a trout and presumably an indication that they weren't really active yet. 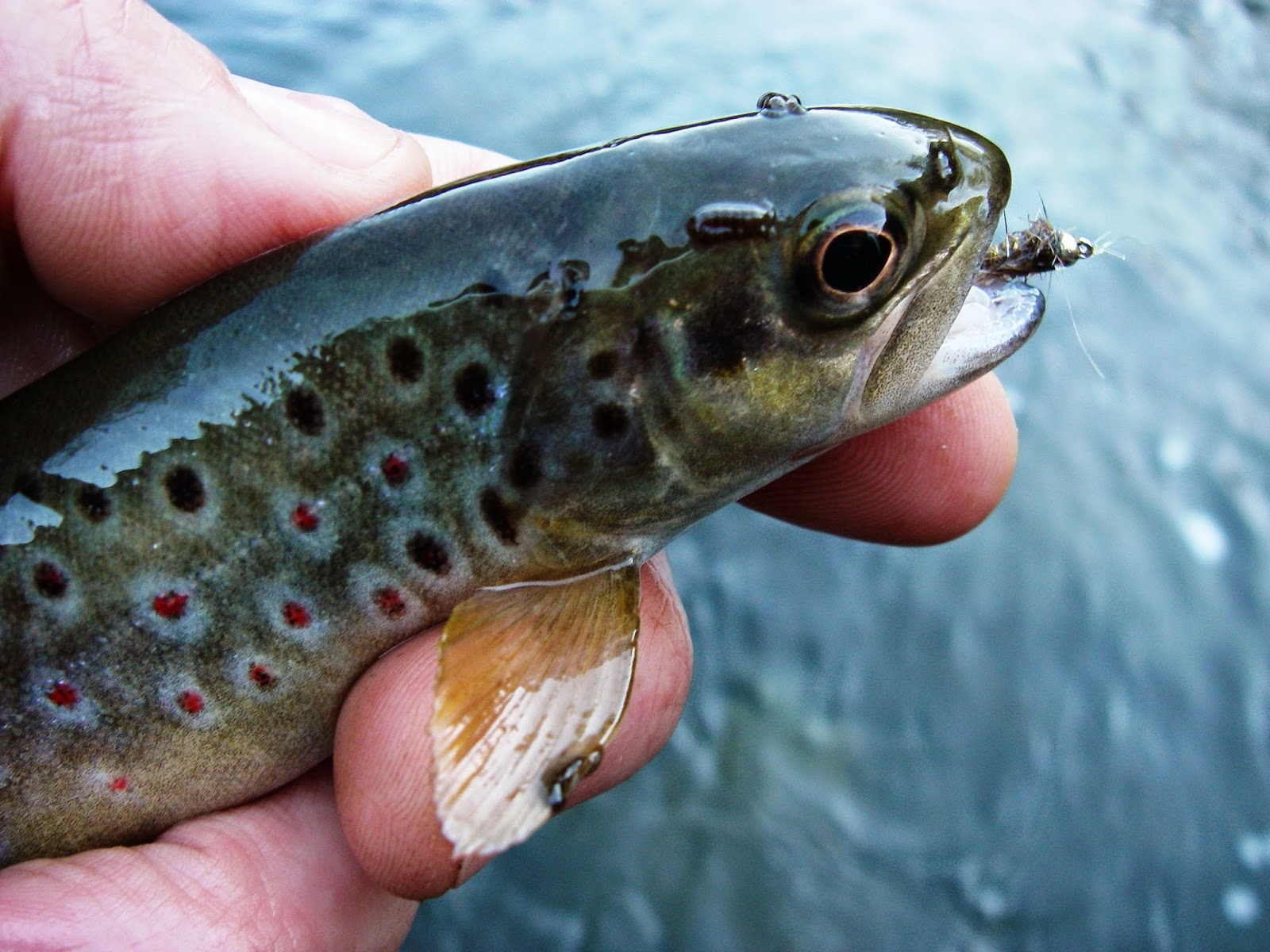 Had a couple more small ones, again on the goldhead, and was nearly at the bridge when I saw a few flies heading upstream against the wind. A few turned into a constant stream, so I stopped fishing and managed to snag one in the landing net on its way past. Was surprised to see that it was a small caddis, which I later identified as the grannom. 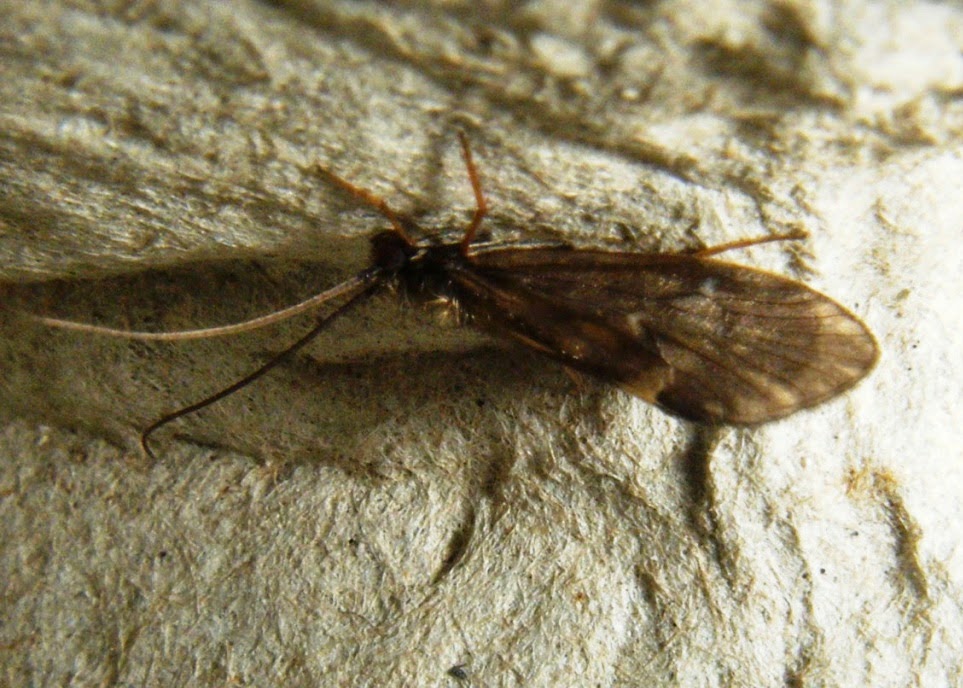 Waited to see what would happen but, whilst the grey wagtails under the bridge and even the local robin were quick to plunder the new food supply, there were very few rises from any trout. I'd not got any suitable dries with me anyway. However, when I eventually spotted a slashing rise directly opposite me and just past mid-river, I flicked the flies across and "high-sticked" them over the spot. Second try and a trout took the Greenwells spider just as it hit the water. 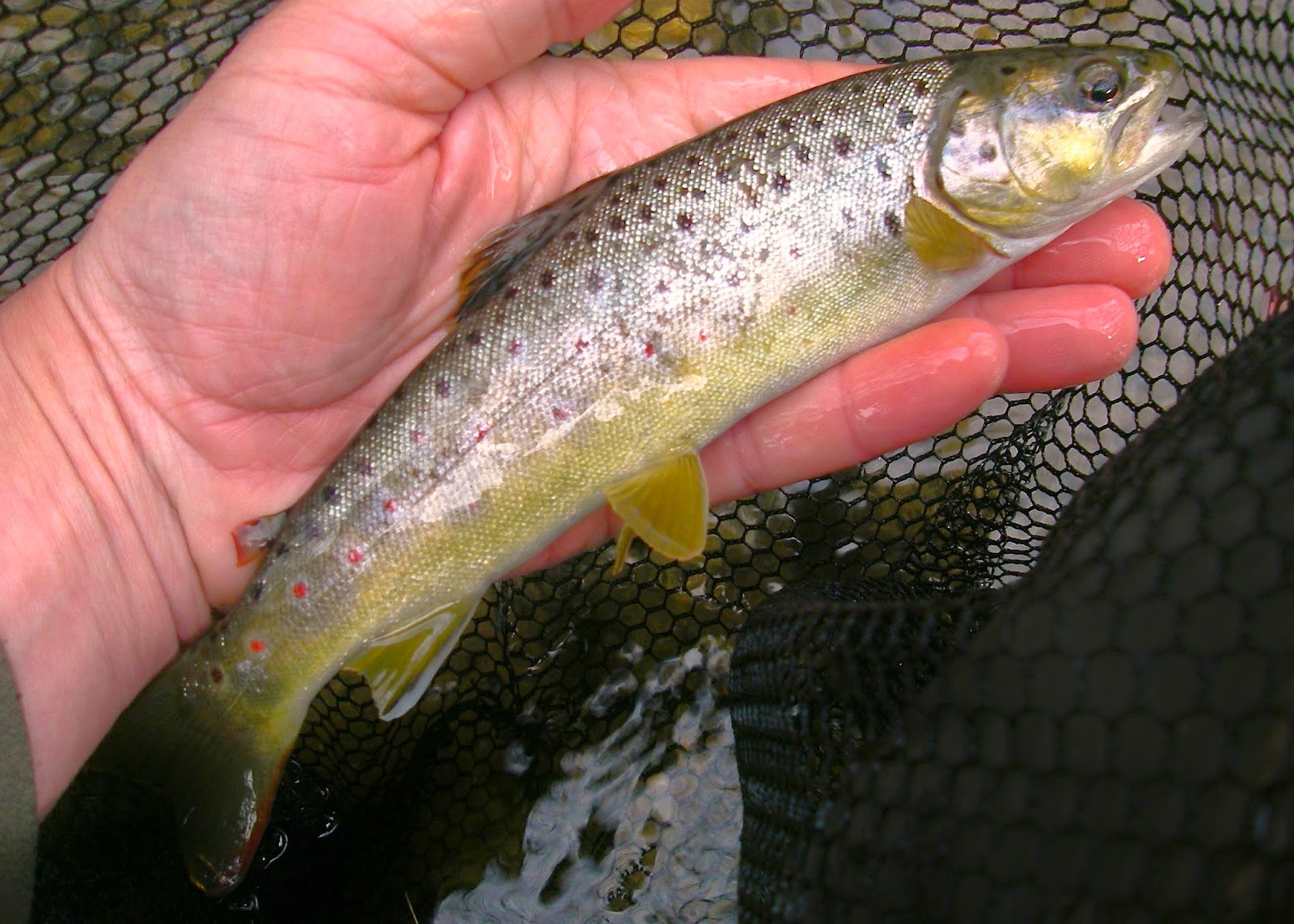 Carried on scanning the water, but the trout seemed singularly uninterested in what was happening above them. I've since read that what I was seeing were females returning to lay eggs and that the trout probably gorged themselves during the hatch earlier in the day. As I was pretty cold by now (I was foolishly only wearing shorts under my waders!) I decided to pack it in and head home. Oh well, it's nice to think that at my age I've still got a lot to learn about fishing!
Posted by Toodle No comments:

﻿
We were down in Pembrokeshire for Easter and were lucky to have some real t-shirts and shorts weather. Most of the time was therefore spent with the family on the coast, or getting some distance (and height!) in on the road bike. However, I did manage to get down to Pembroke Dock a couple of times early in the morning for an hour either side of high tide. Wasn't expecting it to be as prolific as last trip as it was still early in the year, but bites were few and far between. In fact, the first trip was a total blank. However, I did run into a nice chap (stupidly didn't get his name!) who was originally from Derby, but who had fished around Pembrokeshire since he was a kid, so had a wealth of knowledge about local venues that he was happy to share. The following morning I had to scrape ice off the windscreen when I left the house, but when I got to Hobb's Point it was bright, sunny and warming up nicely. ﻿ 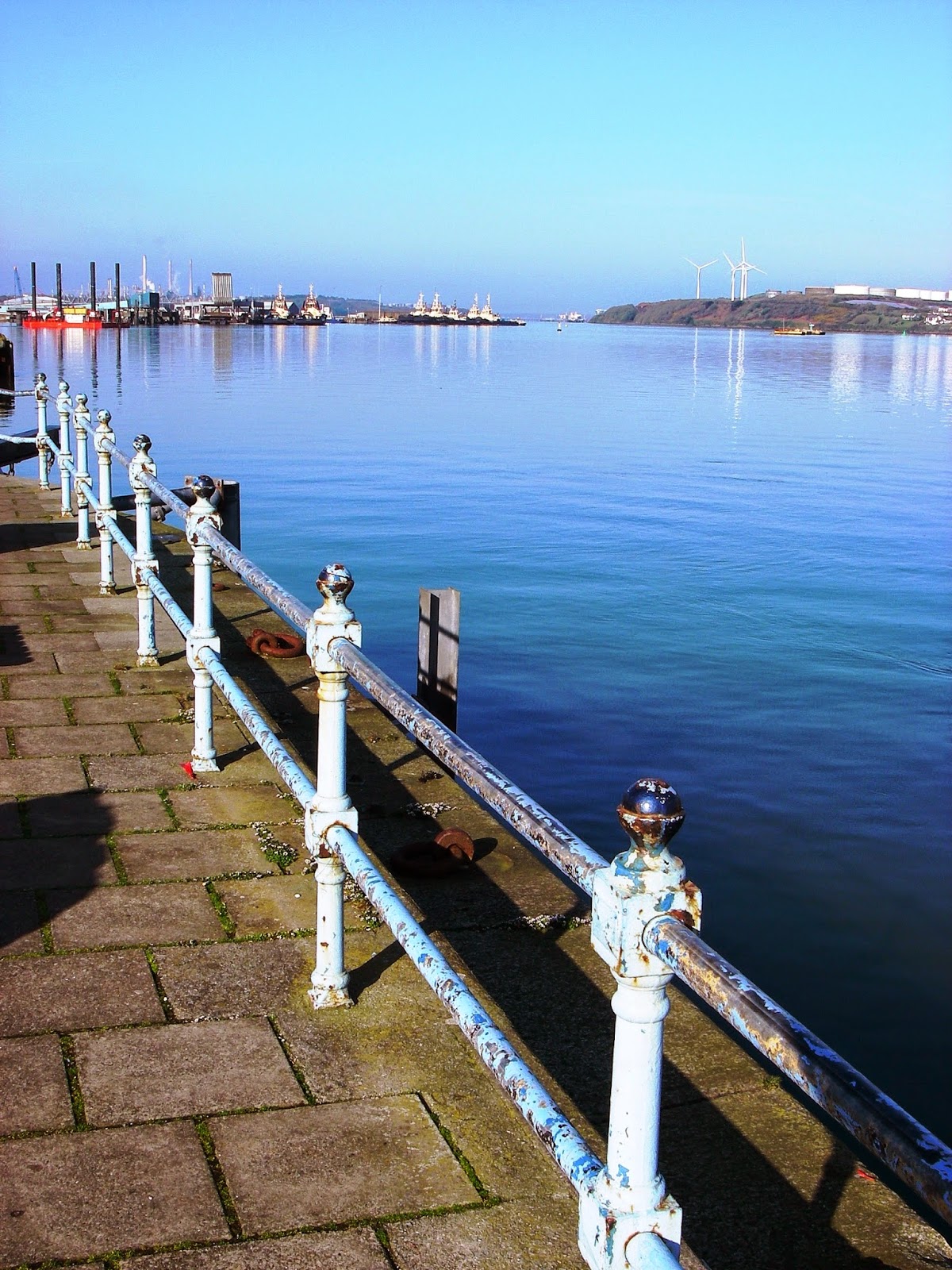 Flat calm in the Haven
Dropped my usual "scratching rig" - a two hook flapper baited with bits of ragworm - down into the depths at the side of the old car ferry ramp. Had a few goby-like rattles before the tip bent over properly and I was into my first fish - a small pollock judging by the curved lateral line and big eye.
﻿ 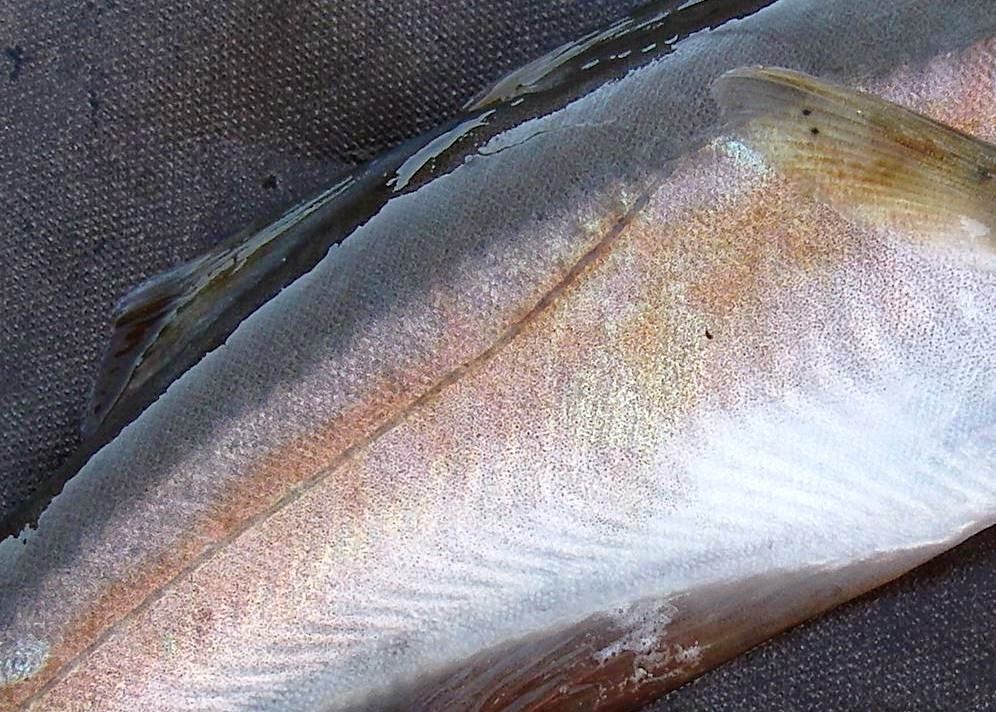 Pollock!
Re-baited and lowered the rig in again, feeding the line down through my fingers. The lead didn't reach the bottom this time as something snatched a bait on the drop. Turned out to be a bright, little schoolie bass.﻿ 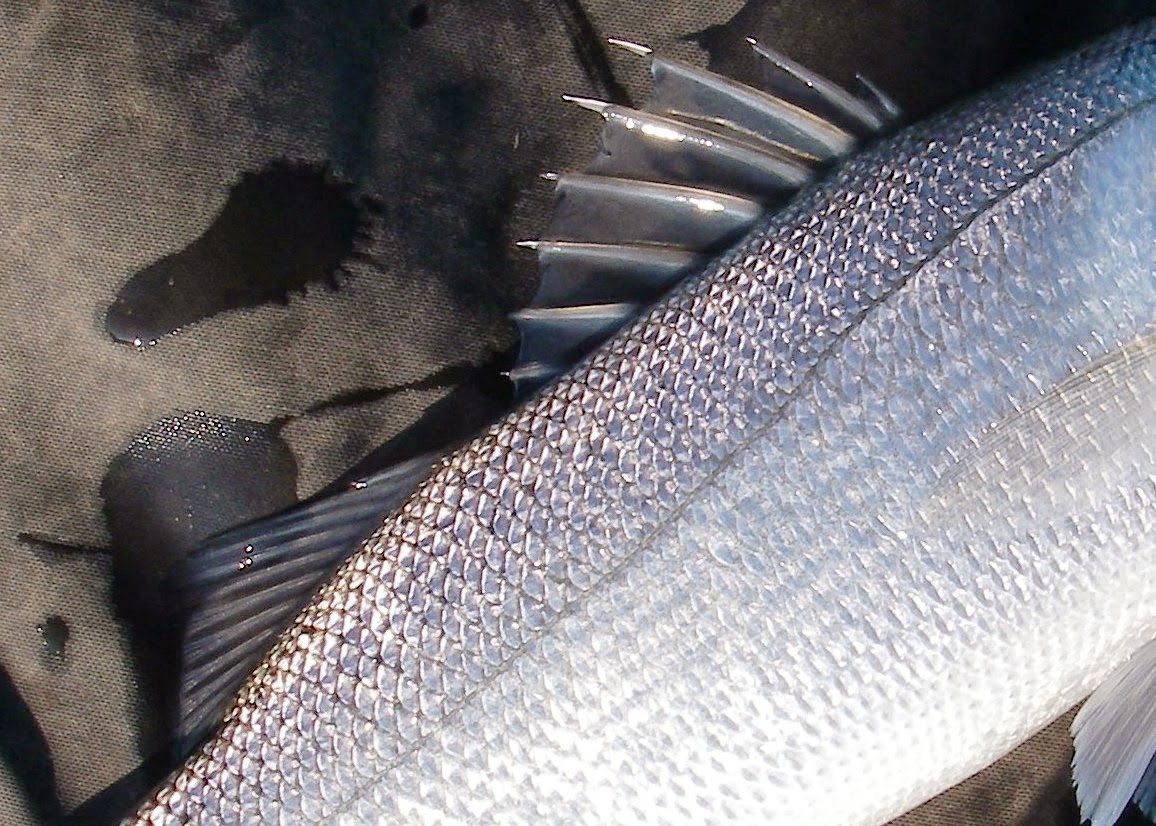 Spikey!
Managed to connect with one of the "rattles" and, as suspected, unceremoniously cranked up a rock goby.﻿
﻿ 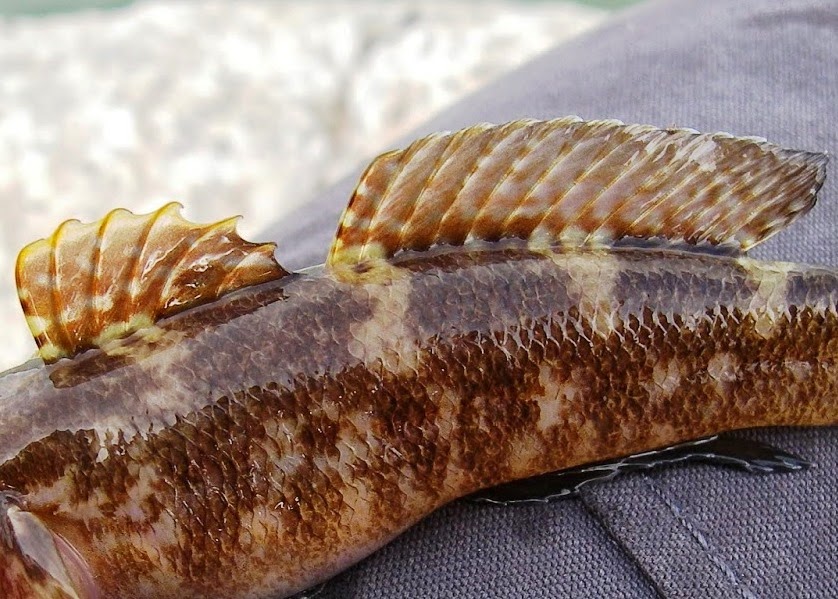 Attention!
The tide had turned at this point, so I knew it wouldn't be long before it would start ripping along the wall and that would be the end of the session. However, had one more proper bite resulting in a slightly better pollock.
﻿ 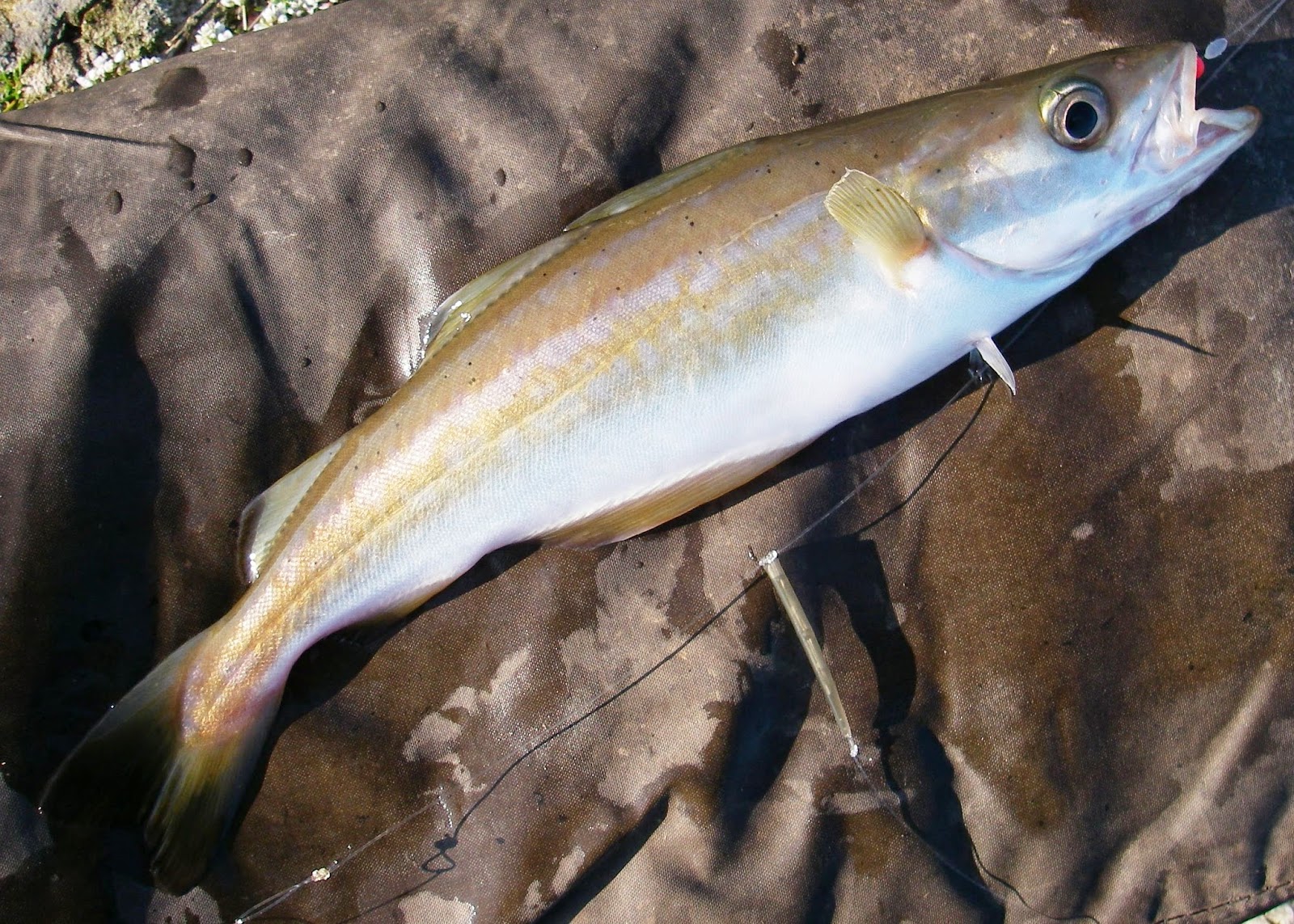 Best 'til last
Packed up after this. Shame not to get a wrasse, but I'll be back in May to give it another go and follow up my hot tips!﻿
Posted by Toodle No comments: