Tried to make the most of the crazy weather last week by slotting in a few, short predator sessions. First up was on Thursday to a section of the River Soar that I'd neglected last season, but one I'd previously done well on at this time of year. However, there was no "Valentine's Day Massacre" on this occasion! Arrived at first light to find the river had fined down to a perfect level after the rain at the weekend, but rather surprisingly it was still carrying quite a bit of colour. Walked up to my usual starting point and quietly dropped a couple of float-legered deadbaits in the margin, a joey mackerel upstream and a smelt downstream. 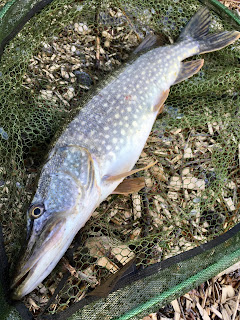 I find that keeping an eye on two floats can sometimes be like watching tennis, so I always go belt and braces and fish the rods with bite alarms and drop offs. This gives me several visual and audible clues, i.e. a tremble on the float, a nod on the rod top, the bite alarm and, failing all of that, the "thwack" of the drop-off hitting the rear rest! However, for the first hour everything remained ominously stationary or silent. Was therefore just contemplating a move when I saw the upstream float bob a couple of times. Stood poised over the rod expectantly waiting for the float to go waddling off, but it never happened, so wound in and checked the bait. Apart from a couple of puncture marks it was fine, so it went out underarm into the same spot. This time I didn't even have time to sit down before the float showed a bit more determined interest from below. Waited until it was definitely on the move before winding down into the first fish of the day. 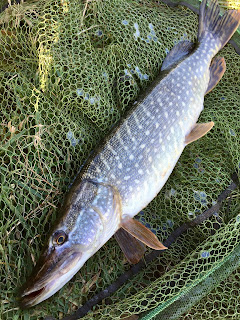 Thought that might be sign that the pike might be waking up but, apart from another dithering take that didn't amount to anything, it was deathly quiet for the next hour or so. I had moved some way downstream and had put one of the baits over to the far bank at this stage and it was this one that was finally picked up. Wound down and bent into a fish, but only stayed connected for a few seconds before the hooks pulled out. Almost immediately the downstream rod in the near margin shot off. Wound down to a much better fish, the rod staying arched over against a solid weight, but agonisingly contact was again short-lived as the hooks failed to get a decent purchase. Was sick as a parrot to lose two fish in such a short space of time on a day where bites were at a premium and a small jack at the death was little compensation. The next day after work I was back on the river on a section further downstream eager for a better result. 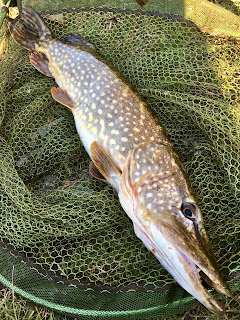 Clarity had much improved and, apart from it being a baking hot afternoon, conditions looked good. Hedged my bets this time by fishing small roach deadbaits on my 1.75 lb specialists. Still adequate to land the stamp of pike that might be present, but a bit more refined should a zander show up after dark. Had a dropped run on my upstream rod within 5 minutes before the downstream rod, fished alongside a bed of rushes on the near bank, tore off. The resulting pike made mincemeat of my thumb in the unhooking process, so the rest of the session was spent with a handkerchief wrapped round it as a makeshift field dressing! Leapfrogged the rods downstream and had another pike as it was getting dark. This one looked to have had a recent and very lucky encounter with a much bigger fish, which made me question my choice of bait and tackle. However, either the big girl wasn't about, or she wasn't interested in my paltry offerings. 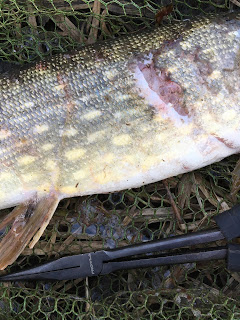 Moved into the final swim, a deep bend with some barges moored on the far bank, where I thought a zed might be lurking. Unfortunately the only only excitement was when a considerate chap decided to clear a whole winter's worth of debris that had accumulated against his houseboat immediately upstream. Luckily I spotted the resulting floating "island" in the gloom just in time to get both rods out of the way before it wiped them out.
Final session was on Sunday morning on the River Trent near Long Eaton. I knew very little about this part of the river other than, several years ago, a friend had fluked a 20 lb pike on a boilie meant for barbel (not surprisingly, no amount of persuading on my part at the time could convince him that it didn't count).  Also, the deeper, pikey-looking swims were right at the bottom end of the section, which involved a bit of a slog from the car park.

Got there at first light to find a bivvy installed in one of the swims. Checked with the sleepy occupant that it was okay to drop in downstream and soon had two baits out in the margin. Again, conditions seemed perfect, but an hour later I'd had no interest so made a move. My fellow angler was packing up at his stage after an unsuccessful night after the barbel, so I stopped for a quick chat. He mentioned that somebody had been pike fishing the swim I'd been in the previous day and that they'd had just the one jack, which had been very badly deep-hooked. Tried a couple of swims upstream, but that news and the presence of empty beer cans, Finlandia vodka bottles and discarded, home-made landing net did little for my confidence, so I was back home a lot earlier than planned.

It would be nice to get a big girl before the end of the season, but time is running out and there's still so much to do!!
Posted by Toodle No comments: