Didn''t get up to much this weekend, just spent it relaxing in the garden and soaking up the glorious, atypical Bank Holiday sunshine. 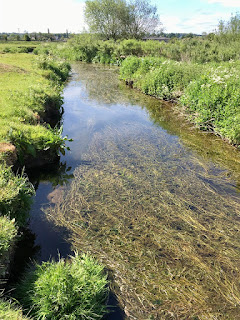 Elsewhere though the great British public packed the beaches and engaged in mass brawls, firmly putting into context the wrongdoings of the Government's chief advisor, but enough of that! Sitting out under a clear blue sky it is easy to forget that February 2020 was the wettest on record in a data series going back to 1862 and that overall the UK had 237% of the long term average rainfall (LTA) for that month. In complete contrast, the Midlands only received 32% of the the LTA in April. With the 3 month prediction from the Met Office of below average rainfall and above average temperatures for May, June and July on top of that, it is not surprising that we are already seeing impacts on river flows. I was therefore in two minds where to head next - the tiny Staffordshire River Blithe, or the much larger River Dove. In the end I plumped for the former, having meant to recce it over the winter and never getting 'round to it.


Tuesday morning therefore saw me pulling into a deserted farmyard at about 6.30 am. The sun was still low in the sky, but it looked as if it was going to be another warm and bright day, which was another reason for getting there early. Got the chesties on and walked across the field to the river, which ran through open pasture. 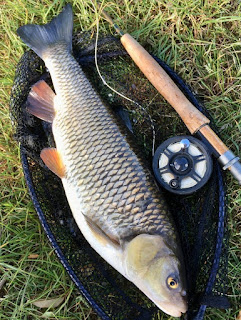 I'd got two outfits with me as other members had already had some big brownies on spinning gear  - my usual 7ft brook rod and an heavier 8ft rod to fish a streamer, although the opportunities to use this turned out to be limited. The river itself was low and clear and as I walked upstream I found that large sections were choked with ranunculus. Those areas that were weed-free were generally silty and featureless, with balls of green "snot" on the bottom, so I ended up concentrating on the deeper pools and the faster runs where the flow was keeping the gravel clean. It was in one of these runs tight to some marginal reeds that I had a knock on a small goldhead on my brook outfit. Lifting the rod I thought I'd snagged bottom....until it started moving. However, the black edged tail I could see waving about above the water as I gave it some welly on the light rod revealed that it wasn't a brownie, but a really fat, well-conditioned chub of 3lb 8oz instead. 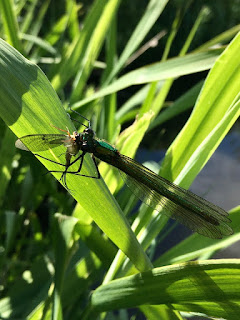 Unfortunately, as I made my way further upstream, the only other fish I saw were hundreds of minnows and a of couple of tiny trout that were sent shooting into cover by my shadow. Despite switching between the rods and tactics I failed to buy another bite in any of the other spots I tried. There was a bit of excitement at about 9.30 am when there was a small hatch of mayflies that had me hastily tying on an artificial, but nothing appeared to be interested in them apart from the demoiselle damselflies that were snatching them mid-air and then retiring to the bankside reeds to eat them alive! When I got close to the upstream limit I was mobbed by a herd of over-excitable, young heifers that insisted on following me like a gang of heavyweight groupies as I waded upriver. Had to wait until they got bored and wandered off to find some shade before I could carry on, by which time I'd had enough myself. 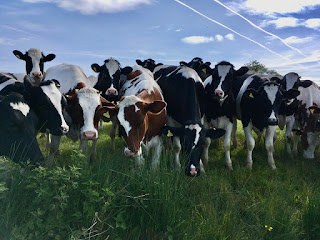 The sun had risen quite a bit by now and as I walked back downstream I could clearly see the bottom in all of the spots I'd tried earlier and, apart from the hordes of minnows, nothing appeared to be in residence. Similarly, the farmyard was still deserted when I got back to the car, hot and sweaty from the walk and looking forward to a coffee and a late breakfast. Realised that I was probably lucky to avoid a blank given the conditions and I had to be pleased with that chub on a little fly rod.

From talking to other members since it seems that it's always a bit of a struggle this time of year, but there are big fish there as a reward. Where to next? Well the new river season is bearing down on us rapidly, so who knows, but we could really do with a drop of the wet stuff soon please!
Posted by Toodle 3 comments: 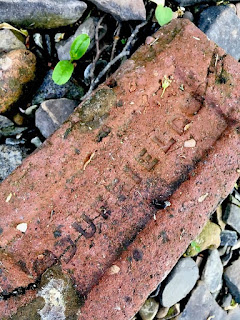 I suspect that many people, myself included, greeted last week's announcement about a phased relaxation of lockdown, particularly with regards to the rules on fishing, with a degree of optimism. However, based on my own lockdown experiences, I am sorry to say that I do not entirely share Mr Johnson's trust that common sense will prevail when it comes to the Great British public. So, whilst I am now keen as anybody to wet a line, I am not going to risk my health, my family's health, or anybody else's health for the sake of my hobby. Canals and stillwaters are therefore off the agenda for me for the time being. Instead, I'm looking at this as an opportunity to get the fly rod out again and explore some of the more remote and neglected waters on my club books - some old, some new, but all with the common denominator that hardly any bugger fishes 'em! 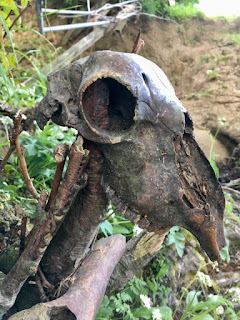 First on the list was a small, overgrown tributary of the River Derwent near Derby that I'd fished a few times in 2014. My first trip of that year was my most successful with a hatful of wild brownies and an immaculate, overwintered stockie coming to the net, so I was hopeful of a similar result. Got to the venue just after 6 am and made my way across the field to the river, pausing to make an offering to the local totem! Whilst there were plenty of reminders of the February floods in the way of debris festooning the overhanging trees, the river that greeted me was very low and clear. In addition, apart from the shallower, faster runs where the flow was keeping the gravel clean, the bed was already covered with a film of snot-like, brown diatoms. 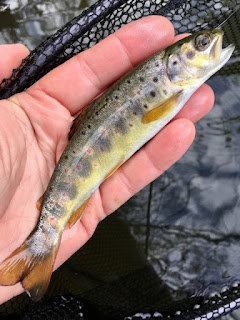 Whilst it was still early in the day, I could feel a distinct chill through my chesties as I lowered myself into the river. I therefore opted for a single, generic "tungsten taddy" on a barbless size 14 hook. These had been tied for me by a friend of "Skateboard Dave", Leicestershire-based pioneer of fly-fishing for neglected urban trout and coarse fish. With a bit of sparkle in the dubbing, a sparse hackle and a marabou tail these represent anything from a mayfly nymph or a caddis fly larva to a small fish. Pitched it up into the head of the first fast run with the 7 ft brook rod and thought I felt a little bump as it came back towards me. Second cast, the same. Third cast I had a more positive take and hooked into a fish that shot downstream past me before coming off! 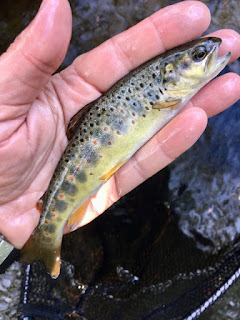 Cursed myself for botching my first chance, as I suspected that bites would be at a premium given the conditions.However, I wasn't disappointed for long. Moving upstream to the next run I had a chance first cast as my fly drifted under an overhanging willow and this one stuck -  a proper little, wild Derbyshire jewel. The very next cast I had another similar one and I began to think that I was going to catch a few. However, I was a bit premature! Next spot I hooked a much better fish that again did the trick of shooting downstream at warp speed, making the reel fizz briefly before it reached the sanctuary of some tree roots and slipped the hook. Unfortunately, that was to be my last chance for quite a while despite me fishing any likely looking spots hard over the next couple of hours. 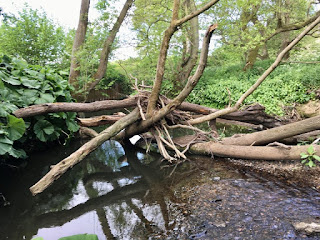 It didn't help that my progress upstream was severely hampered by numerous blockages caused by trash dams and fallen trees, some of which looked like a giant game of "pick up sticks"! I had been prepared for a bit of jungle warfare after my previous visits, but I was getting a real workout clambering out of the river and forcing my way through the bankside brambles to find a suitable re-entry point. By the time I reached the upstream limit I was hot and sweaty, but hadn't had another touch. 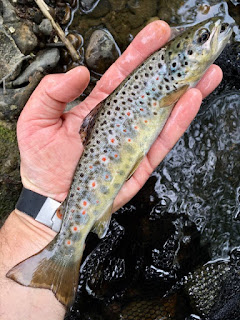 Slogged it back downstream to my starting point and decided to give a spot that I'd missed the first time 'round a quick go before I headed back to the car. Flicked the fly into the fast water where it was immediately grabbed by a fish that again shot downstream, but straight under a trailing strand of barbed wire and through a tangle of tree roots! Dropping the rod I grabbed the leader and managed to hand-line an angry little trout back through the roots and into my net.  Headed home for lunch at this point and, whilst it had been hard work, I had enjoyed my few hours of normality. As well as winkling out a few fish in difficult conditions (who would have thought that we'd be needing some rain after such a wet start to the year!) I'd shared the morning with a kingfisher that had buzzed me several times on its trips up and down the river, a dipper and a pair of Mandarin ducks. Definitely good for the soul!
Posted by Toodle No comments: