Got a credit off the wife for a day out fishing as part of my birthday package so, after watching the weather and the river levels all week, I decided to have my first grayling fishing trip of the year. Not that the temperature was one you'd normally associate with grayling fishing - it was well into double figures when I left the house at about 0730 hrs! 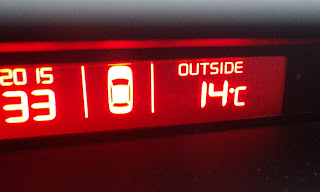 Headed off to a club stretch on a small tributary of the River Dove in Staffordshire where I'd had some success last year. Not huge fish, but plenty of them. Got there at first light (if you could call it that - grey and gloomy more like!) to find that I was first in the parking spot. Set off upstream across the waterlogged field and was pleased to see the river running clear and at a nice level. By the time I had reached my first swim I was pretty warm, so first action was to ditch the coat before setting up the gear. Dropped into a swim that had proved reliable in the past and so it proved again - second trot through and the float buried at the end of the run resulting in satisfying thump and then the mad gyrations of a hooked grayling. 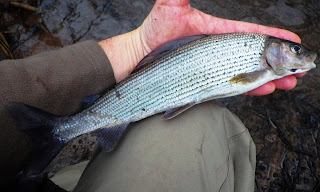 Had a three more out that swim before moving on. Was using my new Drennan 11ft Ultralite float rod with my Speedia centrepin. Found it to be nicely balanced and the shorter rod was definite advantage in some of the tighter swims. 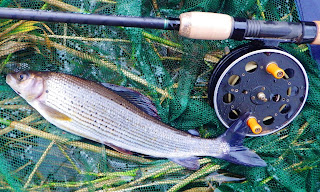 Took my time, dropping into any likely looking spots and winkling out a couple here and there as I did so. Was pricking and losing a few fish, so changed the hook to a size 16 Drennan wide gape that seemed to improve things. Thought I'd caught the mother of all grayling at one stage when I hooked a fish that shot off upstream with me trailing in its wake. However, this turned out to be a skinny, out of season brownie that should have weighed well over 2lb if it had been in better condition. 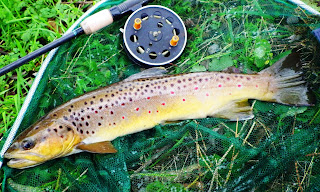 All of the grayling I'd caught up until then had been female, with the majority in the 10 - 12 ounce bracket. Was beginning to think where the bigger males were when I chanced on a group of fish in a really tight little spot under some trees - a small depression in the river bed (the flat spot in the photo below). 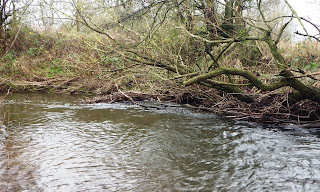 First trot through was another female, but then I had two males in consecutive casts, both over the pound mark. 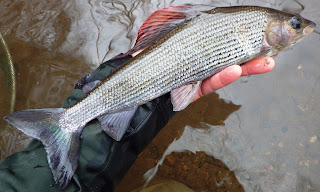 That little spot must have been stacked with fish as I landed eight and bumped another three before moving on. I'd been so engrossed all day that I'd lost track of time and was surprised to see I'd only got an hour of daylight left. Again, I'd only covered a fraction of the water. Settled into the final pool of the day where I had a couple of small chub to add a bit of variety. 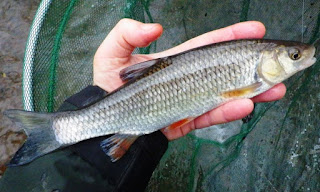 Fished on until I could no longer see my float through the encroaching gloom. Finished with 25 grayling, all but two of them females - definitely a day for the ladies!
Posted by Toodle No comments: